After a stormy night session, the coalition was able to pass the necessary amendments and election laws that would make it more difficult to topple a government and eliminate small factions. Left-wing and Palestinian members of Knesset protested the legislation in ‘silent speeches.’ Ultra-Orthodox MK Eichler spoke to the Arab public in Arabic, saying ‘we are with you.’ (video below) 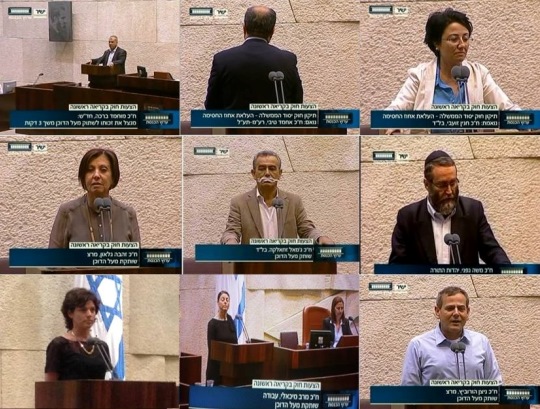 During the last session of the Knesset before its summer recess, the coalition was able to pass a first reading of the “governance legislation,” – an amendment to Israel’s Basic Laws – which would make it more difficult for the opposition to topple the government and for smaller fractions to enter the Knesset. Those who will be most hurt by these amendments are the parties representing the Palestinian public – Balad, Hadash and Raam-Ta’al. The legislation, which could see all of those parties eliminated in the next elections, is considered a major step in the attempt to limit Palestinian representation in Israeli politics.

After the bill was approved in its first reading Wednesday night, Arab Knesset members and several left-wing MKs protested it by standing in silence on the Knesset podium. A unique moment took place when ultra-Orthodox Knesset member Yisrael Eichler (United Torah Judaism) made a short statement against “the persecution of the Arab and the ultra-Orthodox by the government.” Eichler ended his words in Arabic – “we are with you in your struggle for democracy” (video below, 1:14 and then again 1:31 min) – before using the rest of his time to join the silent protest.

Both Orthodox parties, Shas and United Torah Judaism, are now part of the opposition.

The new legislation is a joint initiative of Yair Lapid’s Yesh Atid party and Avigdor Lieberman’s Yisrael Beitenu. According to an amendment to the Basic Law on Government (one of several laws which are the Israeli equivalent of a constitution, and can only be changed by an absolute majority), the government will not fall following a no-confidence vote, unless a new collation is presented within three weeks. The government will also stay in power even when it cannot pass a budget (today, such an event leads to new elections).

The article that got most of the attention was the proposal to raise the election threshold for a party to enter Knesset from the current two percent, to four percent. This means that a party which receives fewer than five Knesset seats won’t enter the parliament, and all of the votes cast for it will be lost.

The parties most at risk are the ones representing the Palestinian public in Israel. All three non-Jewish parties would be eliminated from the Knesset under the new legislation, if elections were held today. The authors of the law claim that the Arabs should join forces and run under a single list to avoid being expelled from the Knesset – but besides being obviously patronizing, such a demand ignores the deep political gaps within the Arab society, such as the difficulty of secular factions such as Hadash and Balad uniting with the Islamic movement.

The new law would also pose a threat to the Jewish-Arab coalition Hadash – the only such joint party in the Knesset today.

Yair Lapid and Avigdor Lieberman threw their full political weight behind the new law, which required an absolute majority of over 61 votes to pass. Following a filibuster attempt by the opposition held on the previous night, David Rotem of Lieberman’s Yisrael Beitenu party called a special session at 3:30 a.m. so that his Knesset committee could push the bill forward.

Adi Koll, a member of Lapid’s party, abstained during the first part of the vote, which dealt with the issue of no-confidence and ended with the coalition winning 63 to 46. Koll was forced to publicly apologize for her act, and was later stripped of some of her Knesset rights by Lapid. She then supported the bill in the second part of the vote, which dealt specifically with the Knesset threshold, and also passed by 64 to 49.

The vote was postponed to the evening so that Justice Minister Tzipi Livni (who was on her way back from the negotiations in Washington) could attend. Along with the “dovish” members of her party, Amir Peretz and Amram Mitzna, Livni helped provide the necessary votes to guarantee the bill’s success.

Former Knesset speaker Reuven Rivlin was the only Likud member to oppose the bill, due to its effect on the political representation of minorities in Israel.

The “governance legislation” package will now go back to the Knesset committees, where some amendments could still be introduced. The second and third readings are expected in the fall.

Later that night, the coalition passed (again) a bill mandating a referendum in the Israeli public in any event of evacuation of Israeli territory. This legislation will also be completed in the fall.