Israeli troops Palestinians reportedly killed 15 and wounded 1,400 Palestinian demonstrators during the first day of what the organizers are calling ‘The Great Return March,’ 45 days of protests and events planned to mark 70 years since the Nakba. Updates will be posted as events unfold. 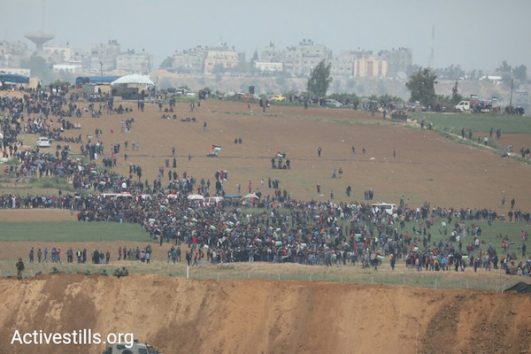 Thousands of Palestinians protest in Gaza near the border with Gaza as part of the ‘Great Return March.’ March 30, 2018. (Oren Ziv/Activestills.org)

Thousands of Palestinians are protesting in Gaza near the border fence with Israel on Friday. The protest marks the beginning of the “Great Return March,” a 45-day series of events planned to culminate on May 15, Nakba Day. While the Israeli army has portrayed the march as a violent provocation organized by Hamas, the march’s organizers have stressed that the march is an apolitical, non-violent protest against the unbearable living conditions in Gaza and for the Palestinian right of return.

[This live blog has ended.]

Palestinian authorities in the Gaza Strip are now reporting that Israeli troops killed 12 people during the protests on Friday, bringing the total killed to 13 since the morning. Around 1,100 were wounded and treated by medical personnel for gunshot wounds and teargas inhalation.

Protests marking Land Day are also taking place in the West Bank. The Red Crescent is reporting 30 Palestinians wounded, mainly from tear gas inhalation and rubber-coated bullets, during protests in Hebron, Ramallah, and the Nablus area.

The Palestinian Ministry of Health is reporting that a seventh Palestinian has been killed. More than 500 Palestinians have been wounded during the protests.

Ayman Odeh, chairman of the Joint List, denounced the army’s use of live ammunition against unarmed protesters. “On the Jewish festival of freedom of all days, the residents of the world’s largest prison are asking to live. Men, women, and children, residents of Gaza, are marching to demand their freedom, facing off against indifference and cruelty. From Israel’s perspective, there is no legitimate form of Palestinian protest. Even such a model of non-violent popular struggle is met with armed soldiers who do not hesitate to fire at unarmed demonstrators. Israel must immediately stop the shooting and allow the residents of Gaza to carry out their just and legitimate protest.”

Since the early morning, Gazans have been gathering all along the eastern border of the Gaza Strip. On the edge of Shajaia, near the disused Karmi checkpoint, Mouna Jadalah tells +972 Magazine’s correspondent, “We are coming here today in peace, with no stones, nothing not any kind of weapons. I hope the army will deal with this march of return wisely, and will not shoot at the protesters.”

The Palestinian Ministry of Health is reporting 365 Palestinians wounded and four killed since this morning.

According to a statement released by the Israeli army spokesperson’s unit, 17,000 Palestinians are protesting at five different locations along the border fence with Gaza.

Though the return march is being organized by a range of different groups, Israel continues to label the march a Hamas-organized event. “Hamas is entirely responsible for the events and their consequences,” the army spokesperson stated. The Israeli army, meanwhile, is using live ammunition and tear gas against the Palestinian demonstrators.

While the organizers are affiliated with the full range of Palestinian political parties and movements, the Hamas leadership did attend the march Friday morning and Ismail Haniyyeh reportedly gave a speech in the morning. 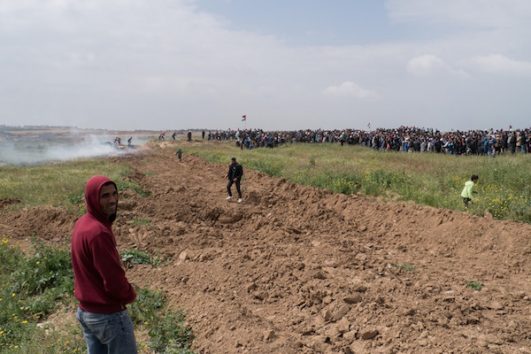 The Red Crescent reports that a Palestinian protester has been killed, raising the total number of casualties to two. 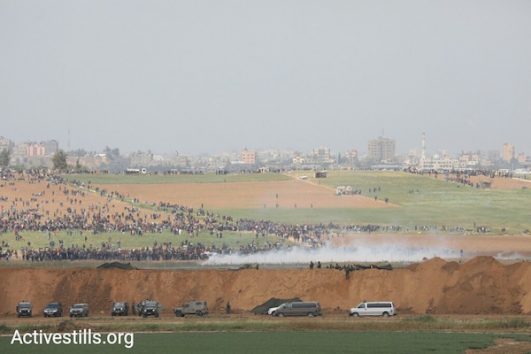 This year Palestinians will mark 70 years since the Nakba (in Arabic, the catastrophe) in 1948. During the 1948 war and its aftermath, Israel destroyed hundreds of Palestinian villages and more than 700,000 Palestinians were expelled or fled from their homes. Some 70 percent of the Gazan population are refugees, meaning they or their grandparents fled or were expelled from towns, villages, and cities inside the territory that become Israel in 1948.

+972 Magazine spoke to one of the organizers of the ‘Great Return March’ earlier this week. According to Hasan al-Kurd, a leftist organizer in Gaza, the plan is to set up camps between between 700-1000 meters from Israel’s border fence, outside the Israeli army’s unilaterally imposed buffer zone, where anyone who enters is liable to be shot. In the weeks leading up to Nakba Day, there will be marches and bicycle races and other events every week, aiming to draw more attendees along the way. By mid-May, tens or hundreds of thousands are expected to join.

“We want families. We want to live in peace — with the Israelis,”  al-Kurd said. “We’re against stone throwing or even burning tires. We will make sure the protest doesn’t escalate to violence — at least from our end.”

Even before the march began, however, Israeli security forces launched a public campaign painting the ‘Great Return March’ as a violent, Hamas-sponsored event. The Israeli army’s chief of staff announced the deployment of 100 snipers and several infantry brigades to the area of the Gaza border fence. Israeli generals warned that there will be casualties. The Israeli army personally threatened bus company owners and their families against transporting protesters to the border. “From my point of view,” COGAT Gen. Yoav Mordechai told Al-Hura TV, “if bus companies you own take some of the protesters and bring them to the border, you and your families will be held personally responsible.”

Friday’s march in Gaza also coincides with the anniversary of Land Day, which itself commemorates how in 1976 Israeli security forces responded to a general strike and mass protest of Palestinian citizens of Israel by killing six and wounding some 100 others.