Although many critics claim the J14 movement failed by not challenging the occupation or achieving sufficient results for Israeli workers and the middle class, a wave of revived labor organizing indicates new potential for worker power — a May Day update. 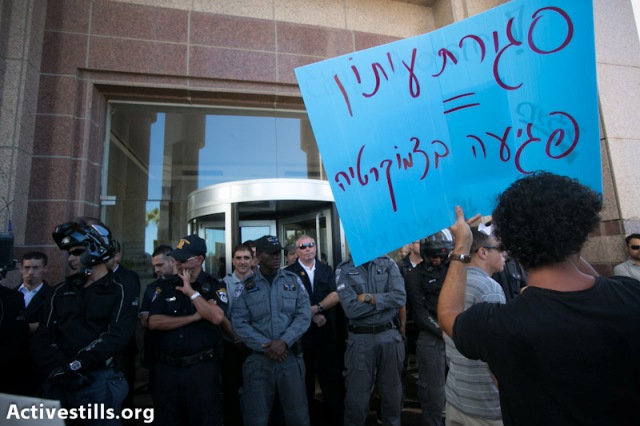 “Closing a paper = a damage to democracy”. Journalist facing guards at the offices of one of Ma’ariv’s owners (Yotam Ronen / Activestills)

One thing is certain: personally, it’s been a hell of a ride. About 18 months ago the new Union of Journalists in Israel (UJI) was set up and I quickly joined. It took us a couple of months of hard work until April 22, 2012 when the UJI announced it was officially representing journalists in 10 media organizations; I was appointed chair of the union (or Father of the Chapel) of the Ma’ariv daily newspaper. Little did I — or anyone else — know that within four months, what was once one of the largest newspapers in Israel, owned by one of the country’s strongest capitalists (Nochi Dankner), would collapse altogether. Around 2,000 workers were left at risk of losing their jobs without the paper paying what it owed them.

For more than two hot summer months the paper’s journalists and workers flooded the streets in protest. They blocked Tel Aviv’s main roads, stormed the 41st floor of the Azrieli Towers, where Dankner’s headquarters is conveniently located, marched on the owners’ houses, visited the Knesset, took strike actions and utilized the paper and its website (NRG) as part of a struggle against the paper’s closure and mass layoffs without compensation.

It was a hard struggle but in part, we won. The paper was not closed but rather sold to Shlomo Ben-Tzvi, owner of the religious right-wing paper Makor Rishon. More than half the jobs were saved, full compensation was promised to all and a new collective bargaining agreement was signed, guaranteeing the rights of those who remained. It was the first such agreement in the private media sector for nearly 20 years (the old Journalists Association had become obsolete and ineffective for anyone outside government-owned television and radio, including for Haaretz journalists).

But there was also a personal price to pay. As the new owner came in, he chose not to hire me, and I was left unemployed. The union is still fighting the management in court over their choice, deliberate as the union has it, to sack the head of the union. 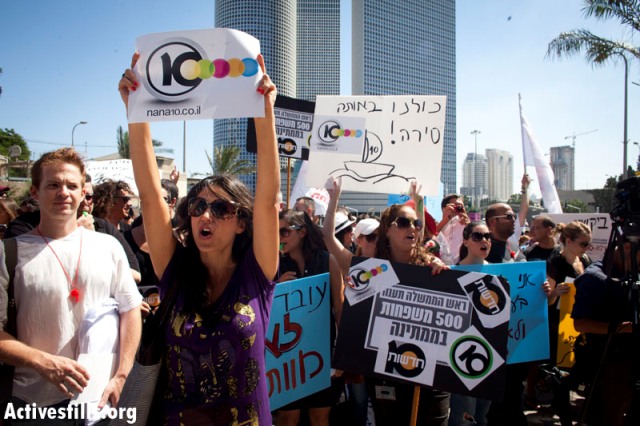 The new Journalists’ Union, which now has more than 2,000 members and is representing journalists in most of the large media organizations, brought back organized labor to the world of journalism after it was disintegrated by publishers during the nineties. It has not been the only place where organized labor is making a comeback. More than 30,000 Israeli workers joined unions over the past two years, some of them the first ever in their field. Such was the case of the high-profile struggle of thousands of Pelephone workers, who were the first-ever workers to unionize in an Israeli cellular company, and who had to lead a three-week-long strike in order to win recognition. This opened the door for other workers in their industry to join the union train. New locals were set up in countless companies, and teachers, social workers, doctors and nurses and factory workers went on strike for their rights.

Each and every company where workers choose the union has its own set of circumstances, be it the collapse of Ma’ariv or the dramatic change of legislation that opened the cellular market for competition last year. However, I believe that the phenomenon as a whole derives from the J14 protests that flooded the streets of Israel’s cities in the summer of 2011, including the largest demonstration in the history of the country.

The linkage between the protests and the unions can often be found in the rhetoric of union leaders and the activists themselves. Pelephone workers often referred to the J14 slogan, saying that the union is the only way to achieve true social justice. At Ma’ariv, as with the founding of the UJI as a whole, I felt that journalists had a new perspective on capitalism, worker rights and what proper journalism should be about; they themselves took part in the protests against the rising cost of living and demanding decent salaries and working conditions. 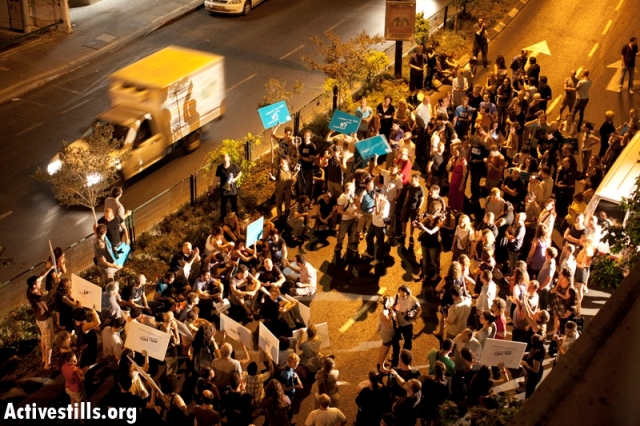 So while J14, its banners, encampments and mass rallies disappeared over time, and although the splits in the movement were partly behind the election of Yair Lapid, its spirit lingers on in small activist groups, the sprouting of new cooperatives all over the country and especially, the return of organized labor.

There are, of course, many obstacles in the way. Unions are at times depicted as an extension of the de-legitimized radical left, or more often as powerful monopoles that are the cause of the rise in cost of living. In recent weeks there has been talk in the government of pushing forward anti-strike legislation and a possible cancelation of the labor courts, in addition to indefinitely postponing salary raises in the public sector, which were promised following several strikes in the past two years. However, the unions are already preparing for battle. Thus, May Day 2013 is a good day to celebrate our victories, as well as a day to recognize the challenges ahead.

Related:
The price of turning Israel into another Scandinavia