The question is whether Israel will ever realize that regardless of the somersaults it does to try and establish legitimate claims to to the land, its power will one day run out.

So, Migron, the little illegal outpost that made big headlines in recent months, was finally evacuated in its entirety on Sunday, after years of legal battle and media commotion made over 50 families. 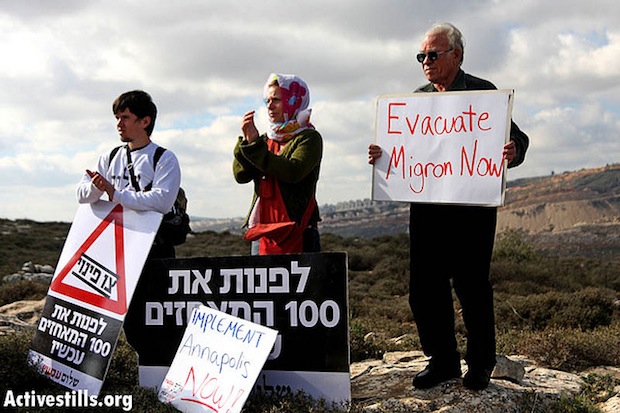 Demonstration to evacuate Migron in 2008 (Activestills)

News outlets made sure to report that the evacuation was carried out peacefully and with little resistance. Today’s Haaretz editorial chose to point to the fact that although the affair is a “badge of shame for Israel,” it is affirmation that justice and rule of law in Israel are being upheld.

Despite the political pressure and many attempts to postpone implementation of the eviction order, the justice and law enforcement systems passed the test.

But can we genuinely look at the Migron affair as a success story for Israel’s legal system? The editorial even admits:

The bad news is that an outpost established through deceit, without a permit, and on privately-owned Palestinian land managed to dispossess the land’s rightful owners for more than a decade.

Can I really rejoice at the fact that more than 10 years of theft and colonization done in my name and paid for by my tax money have now come to an end in one single, tiny place? And whose inhabitants will now be just a few meters away anyway, still in the West Bank?

The emphasis on the fact that Migron was an illegal outpost on private Palestinian land – and thus somehow worse than others – is problematic. Is there really a difference between the settlement of Ariel or Ma’ale Adumim and the outpost Givat Assaf or Avigayil? After all, an outpost is nothing but a baby settlement, a new settlement. All settlements were once outposts.  The fact that Israeli law does differentiate between illegal and legal outposts is but a nonsense facade to provide a semblance of law and order in its takeover of the West Bank.

Besides, the fact that certain outposts are considered illegal by Israeli law (since they are built on private Palestinian land that the landowner can prove with a deed) has not stopped Israel from finding loopholes, or just changing the law to suit its desires.

As David Newman, dean of the faculty of Humanities and Social Sciences at Ben-Gurion University points out in an op-ed in the JPost:

Whether Migron is defined as legal or illegal is of no significance, as is also the case with regard to the many other smaller communities and outposts which have been set up in close proximity to the larger Jewish communities and townships during the past decade. Depending on one’s own politics, all 300,000-plus residents of the region are illegal settlers, or they are all entitled to settle throughout the ancient Jewish heartland of the Land of Israel.

He forgot to mention the other 200,000 settlers in East Jerusalem, but the point is that the issue is not a legal one, or even a moral one – but rather a political one. Israel wants as much land with as few Palestinians as possible. This has always been and continues to be the case. In this sense, the story of Migron is the story of the entire West Bank, and to an extent, all of Israel as well.

Israel’s methods for appropriating land range from military seizure (current example is Firing Zone 918 in South Hebron Hills), to “absentee property” (many neighborhoods in East Jerusalem)  to declaring them “state lands,” which is just a euphemism for confiscation. According to Peace Now, at least 90 settlements in the West Bank were built on “state lands,” which essentially means lands Israel found ways to forcefully and/or deceitfully keep Palestinians off long enough to declare them it as such.  So the concept of “stolen land” or “private land” simply becomes meaningless.

Thus, isn’t the attempt by liberal Israelis to see some kind of smooth distinction between “legal” and “illegal,” “moral” and “immoral” simply ignoring the heart of the matter?

Lets be clear.  According to some people, Tel Aviv is stolen land as well. But even if land ownership in Tel Aviv is proven by Palestinians, no Israeli is going to give it back, or Jaffa for that matter. So the issue of rightful or legal ownership is increasingly irrelevant – as it is something that the entity in power will always have a heavy hand in, and in most cases, ultimately determine.  Rather, the issue at hand is entirely political.

The debate over whose land it is and how it was registered and which parts belong to whom is irrelevant, since as long as one entity has all the power and all the will to control the land, it will continue to control that land – and how it does so is arbitrary.

The question is whether Israel will ever realize that regardless of the somersaults it does to try and establish legitimate claims to to the land, its power will one day run out – and it will still need to figure out a way to live with the Palestinians here.