Following eight months under administrative detention and a lengthy trial, Palestinian lawmaker Khalida Jarrar signed a plea bargain that will send her to prison for 15 months.

An Israeli military court sentenced Palestinian parliamentarian Khalida Jarrar to 15 months in prison on Sunday. Jarrar, who is a prominent critic of the Palestinian Authority — and specifically its security coordination with Israel — was sentenced after eight months imprisonment, some of which were spent in administrative detention.

As part of a plea bargain, Jarrar admitted to charges of incitement, as well as belonging to the Popular Front for the Liberation of Palestine — a party she represents in the Palestinian Legislative Council (PLC) — which is defined by Israel as a proscribed organization. Jarrar’s trial included 25 separate hearings. In order to attend each hearing, Jarrar was often forced to travel over 20 hours while handcuffed.

Palestinian member of Knesset and head of the Committee on the Status of Women and Gender Equality Aida Touma Suleiman (Joint List) responded to Jarrar’s sentence, saying that the decision of the “occupation authorities to imprison a member of parliament for her political positions, and after eight months of administrative detention, proves that the government of Israel is seeking to inflame the situation. This government has nothing to propose but instilling fear in Israelis and oppressing and dispossessing Palestinians.

“My friend Khalida Jarrar,” continued Touma, “is a woman who struggles for peace, for the legitimate rights of her people who are living under occupation, for justice, democracy, and equality for women in her society. Her place is not in prison, it is in the parliament.” 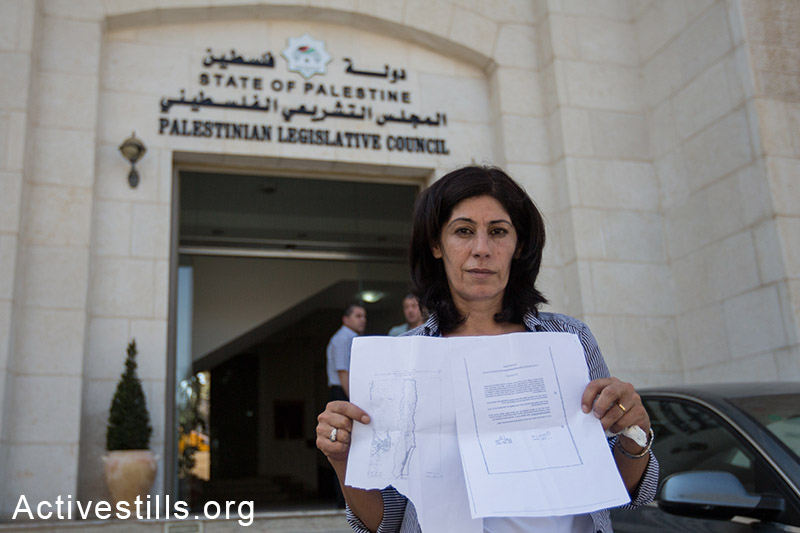 Khalida Jarrar, a member of the Palestinian Legislative Council, leader in the Popular Front for the Liberation of Palestine and longtime advocate for Palestinian political prisoners, showing an internal expulsion order given to her by Israeli soldiers who invaded her home in Ramallah at 1:30 am on August 20, 2014, ordering her leave Ramallah to Jericho within 24 hours. (Activestills.org)

Recently, Avi Blecherman exposed how during one of the court hearings, the prosecution’s key witness was presented with seven photos, and asked to identify Jarrar. Six of the seven photos were of men. The judge reprimanded the military prosecution for dragging out the hearings indefinitely, warning that if the pace does not pick up, he will be forced to release her. The prosecution then threatened to forgo the criminal procedure and request she be placed back under administrative detention.

Jarrar isn’t the only Palestinian lawmaker in prison. According to Addameer, five other members of the PLC are currently imprisoned by Israel, some of them under administrative detention.