In Bil’in, the army is adopting new tactics to get demonstrators away from wall, while in Qadum, it took the initiative with a preemptive strike on the local mosque during prayer. And yet, this past Friday, hundreds of Palestinians and Israeli and international solidarity activists protested against the occupation – and got their fair share of tear gas. 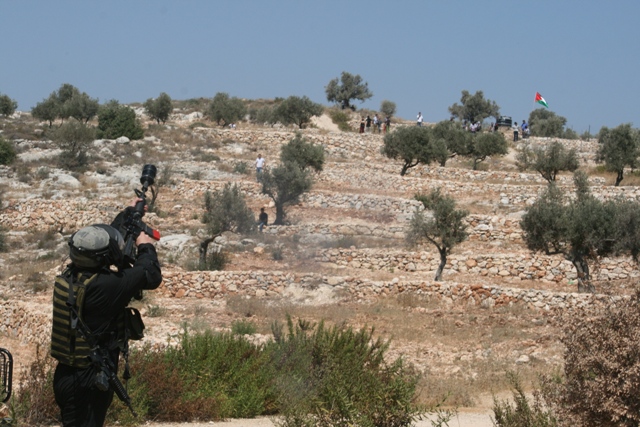 It’s been a while since my last visit to Bil’in. I’ve been busy with union work at Maariv, and besides – taking a Friday at home is always more tempting than marching up West Bank hilltops in the summer heat, and dodging flying tear gas canisters and rubber bullets. This is exactly why it’s so amazing to see just how persistent activists in the popular struggle can be.

At the end of the Friday prayer, about 30 Bil’in residents accompanied by some 20 solidarity activists started their weekly march on the wall. Passing over where the old route of the wall used to run (back then it was actually a fence), one could see just how meaningful the villagers’ victory is: hundreds of acres have been returned to the village due to its relentless struggle, and these lands are now being cultivated – they are thriving, with new groves, olive trees and a playground and leisure area for family picnics. The struggle goes on to push the wall all the way back to the Green Line and retrieve the rest of the land appropriated by Israel. 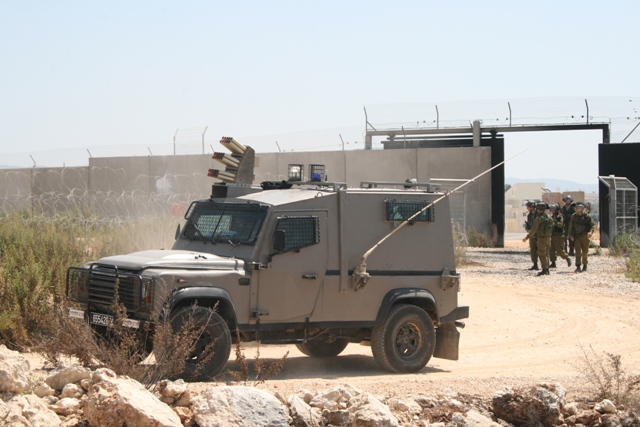 Maybe it’s the heat or the new (female) commander in the area, but the soldiers this week seemed a little lighter on the trigger than I had remembered. They didn’t wait for any stone to be thrown at them before starting to fire tear gas on the small crowd approaching the wall. One of the local activists installed a loudspeaker on his car’s rooftop and teased the soldiers by driving quickly along the wall, chanting calls against the occupation.

Within about ten minutes, a huge metal gate in the wall was opened and the tear gas-firing jeep (“Venom“) crossed over, shooting dozens of tear gas canisters in all directions to make way for four more jeeps and about ten soldiers who started chasing demonstrators away. This apparently is the army’s latest tactical development: instead of playing the old game of tear gas and rubber bullets vs. stones – they are playing it while pushing protesters back towards the old route and into the village. 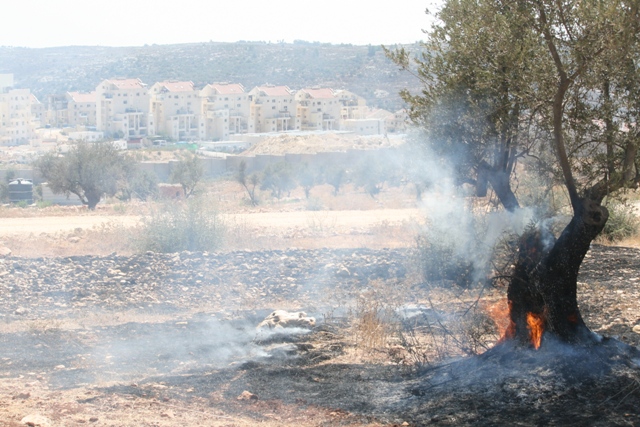 And so it went: a few demonstrators went back, raising flags and chanting. Fewer youth threw stones at soldiers, and the soldiers (surrounded by local photographers and one Israeli activist who kept preaching to them about war crimes and conscientious objection) were doing the shooting. (“You see that guy in the white T-shirt? It’d be nice if you could put some rubber into him,” I heard one commander say to his subordinate.) Quite a few fires started during the demonstration as a result of the dangerous combination of tear gas canisters, dried leaves and summer heat. One olive tree, several hundreds’ of years old according to a local activist, was also set ablaze. Eventually the demonstration ended, with the usual promise to return the following week – as it has for the past eight and a half years. 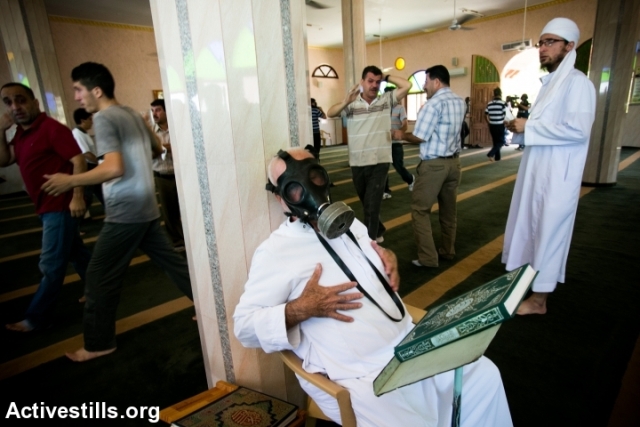 Meanwhile, in other parts of the West Bank, a small demonstration also took place in Ma’asara, a larger one took place in Nabi Saleh, where the army also used “the skunk” (smelly water canon), and in Qadum, where soldiers decided to take initiative and attacked the local mosque with tear gas during prayer before the protest even began. Activists who were present say that old men who were suffocating from the gas put on gas masks so they could go on with their prayers. Two demonstrators were later wounded by tear gas canisters.

It would be the easiest thing to forget that these demonstrations ever take place. Unless a Palestinian is killed or an Israeli wounded, they rarely make it to the news, not even in brief. But they’re there. Every week, for many years now, and probably for years to come. This is also a good opportunity to remind of this week’s upcoming art sale, meant to fund legal defense for Palestinian and Israeli activists in the joint popular struggle. Check it out, and support if you can.