An educated, bi-lingual American Israeli who can’t find a job tries – in vain – to get her landlord to fix her drain. Good luck. 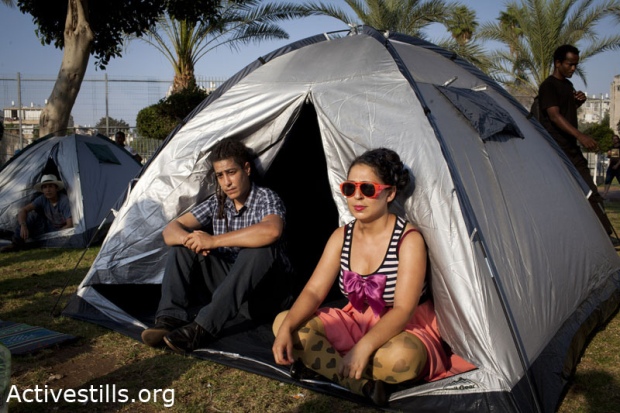 It started in December—when I did the dishes in the kitchen sink, dirty water and bits of food bubbled up from the shower drain, flooding the bathroom. I called the landlord. She claimed that she’s not responsible for the apartment’s pipes. It’s my problem.

I waited it out for a couple of months, hoping that the trouble would clear up as suddenly as it appeared. It didn’t. I told myself that the overflow was actually a good thing because it forced me to mop the floor. But then the mess started coming out of the shower more quickly, too quickly, spilling out of the bathroom, into the bedroom, racing for my furniture. I knew I couldn’t ignore the problem any longer. I called a plumber.

The bill was several hundred shekels. Because one of my employers was several months behind on paying me, it smarted. My boss will get the rest of the money to me eventually, I told myself. Everything is going to be okay.

In April, when the sink started backing up into the shower again, things had only gotten worse.

My employer had coughed up part but not all of what they owed me. Suing was not an option as I’d pay more than my wages in lawyer’s fees. I figured, too, that my employer probably wouldn’t keep me on if I sued.

I asked around and found out that my employer had done this to scores of other workers. My bathroom was flooding with dirty dishwater. My bank account was in the minus. I was picking up leftovers from the shuk to keep costs down. For years, already, I’d been getting most of my clothes from the streets.

I realized it was time to find a different job.

So there I was—three college degrees (two bachelor’s, one MFA—a terminal degree that qualifies me to teach university). A native English-speaker, my Hebrew isn’t perfect. But, I’ve learned enough to be able to do interviews, to translate those interviews, to hold a conversation, to watch TV and to read newspapers and books, to send personal and professional emails. I’ve got a ways to go, of course, but I’m good enough for now. Surely I should be able to find a job, a way to survive.

You know how this story goes.

There was the potential employer who called and told me I was overqualified and urged me to look for something better; there was the minimum-wage, must-work-nights-and-weekends gig I lusted over, only to have it fall through at the last minute; there was the position working as a kindergarten assistant that I pinned my hopes on and was never called for.

I was surprised. But I shouldn’t have been. After all, I could rattle off a list of underemployed friends and acquaintances: a teacher who had to work two additional jobs to make ends meet; a guy in his late-thirties who holds a computer-related degree from Stanford but can’t afford an apartment; that electrical engineer who was laid off recently and is now driving a taxi for a living.

Though I was born and raised in the US, I don’t fall into that group of “rich Jews” that Noam Sheizaf mentions in his post for 972. If you looked at my finances and my work prospects alone, I’m more along the lines of those “ordinary Israelis” who increasingly feel like there is no future for them in Israel.

However, my second passport does give me another option—or another place to pitch a tent, if you will.

So here I am now, in America, flailing about and trying to figure out my next move. Should I move back to the US while it’s in the midst of an economic crisis? Will I really be better off here? (I remember the Israeli guy who used to have a clothing store here in town. It was a spectacular failure and, when I saw him last, two years ago, he told me he was moving back to Israel).

And where is my community? I always felt out of step with the well-heeled, privileged Jewish Americans—an insular and unwelcoming group. Just as foreign were the Christian classmates of my childhood, some of whom told me that I was going to hell because I didn’t accept Jesus as my personal lord and savior.

My heart and spirit are there—in those tent camps springing up in Tel Aviv and across the country.