The rent protesters have been criticised for insisting on calling themselves apolitical. Sitting now in the middle of the protest camp, I can report that what’s happening here is democratic politics at their finest – and that it’s perfectly alright for them not to use the P-word. 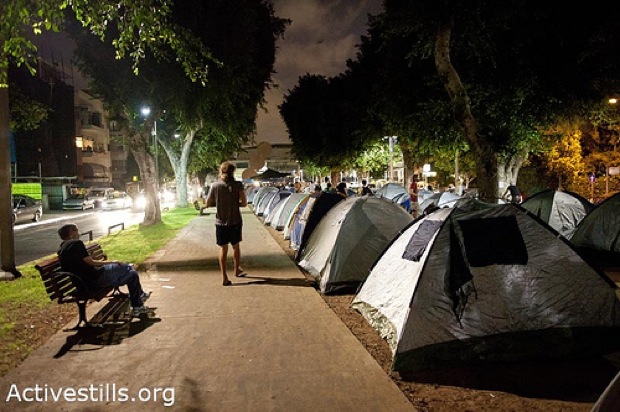 For the past week, hundreds  of people have been gathering on the uppermost edge of the Rothschild Boulevard in Tel Aviv, close to the recently renovated national theatre plaza. Starting with a tiny group of friends who pitched their tents there in protest of Tel Aviv’s exorbitant rent prices, the movement has grown exponentially, both on the original protest site – every day, several more tents spring up as more and more people move in – and throughout the country. Camps have been struck not only in the big cities – Jerusalem, Haifa and Be’er Sheva – but in the forever-struggling border town of Kiryat Shmona, the tiny community of Tel Hai, and elsewhere.

The protest has struck a chord with hundreds, if not thousands, of Israelis. My generation (people in their late 20’s) constitute the first, second or third generation of complete indebtedness. Most of our parents bought the homes we grew up in with mortgages, taken out before we were born and still unreturned. Those of us planning to buy homes and raise families are likely to become similarly enslaved to the banking system, because very few of us are likely to make enough money by the time we are, say, 30, to actually buy a home ourselves – even in the most remote and punishing suburb.

Moreover, Israel’s extremely lax credit rules and remorseless credit card spending culture means most Israeli households are regularly overdrawn on their bank accounts; I know that most of my friends – educated young professionals, many working for top media organisations, academia, the arts, or even high-tech – usually hold their head above the zero line in their bank accounts for the first week or two of every month. Many of those who can boast a positive balance in their running accounts are thousands, if not tens of thousands of shekels in debt – whenever you go above, say, NIS 10k in your running account or get about NIS 5k overdrawn, despite earning well enough, you get a call from an extremely nice banker who offers you a 20 or 30k loan, spread out over several lifetimes with an intimidating interest rate. Accumulating the hundreds of thousands of shekels requested to buy a modest young family flat in said suburbia is therefore out of the question for most of us, and most of us, indeed, gave up on the idea long ago.

But what’s pushing people now onto the street is nothing as fanciful as one’s own property; it’s the rent and overall living costs. Mercer ranked Tel Aviv as the most expensive city in the Middle East already three years ago, and since then rent prices have been soaring. According to Ynet, since 2008, rent in Tel Aviv has risen by at between 17 and 20 percent; in Be’er Sheva, by 40 percent. Jerusalem, with its expansionist construction and the municipality’s subsidies scheme, was affected far less, but the cost of living anywhere within easy access to university campuses or middle-class working places is still preposterously high. I myself hardly know anyone in my peer group, in either of the big cities, who spends less than 40 to 50 percent of their mean income on rent if they live alone, and about 30 percent if they share with flatmates.

I’m typing this at the protest camp on Rothschild Boulevard (aptly renamed by a makeshift sign “If I Were a Rothschild” Boulevard). The scene is at once warm (26c) and chaotic; a motley crowd of starry-eyed young people with signs proclaiming their support love for everyone wander among the tents; someone is grilling meat; someone else is preaching vegetarianism; a bit off, a busker with a rusty saxophone and a young girl engage in some Billy Holidayesque music making; playgrounds and playpens for the young children have been sprung up; the boulevard’s regular chess club has seen an utter explosion of membership.

At the site where the protest started, the very top of the boulevard, the protesters are trying to hold a popular assembly. They are using the by-now universal heckling-free language – twist your palms instead of applauding loudly, raise blocked arms to signal you disagree, make a rolling motion with both hands if you want the speaker to get on with it. In the crowd are members of Zionist youth movements, Israeli Palestinians, proud LGBT activists and ultra-Orthodox from Bnei Brak.

One of the speakers says the discussion will deal with the question of whether the protest should stay focused on the rent issue or tackle the issues that cause the rent to rise. As a first step, he asks the assembly’s approval: Shall we hold this discussion now, or postpone it until tomorrow? A quick and passionate discussion of whether to hold a discussion erupts, but people quickly catch up with the recursion and vote, in a blurry forest of twisting palms, to hold the discussion. Various strategies are proposed, stories are told, poems are read, and the facilitators move the discussion along quickly, pleading with people to make constructive propositions but never shutting anybody up, barring time constraints. The entire thing feels, strangely, organic, open-ended, and effective; the recurring theme is not just the rent, but that the whole system is rotten, the parliament is out of touch, the ministers are unrepresentative, the sovereign people has very little idea of how and by whom fateful decisions are actually being made.

Politics really is a dirty word

There have been three major criticisms of the protest from the left: That it insists calling itself apolitical; that it’s unfocused; and that it wouldn’t touch the occupation issue with a stick. Each of these charges merit a separate post; but for now, briefly, I would just like to comment on what Dahlia termed “this cowardly avoidance of politics”, calling upon the protesters to “do their homework”, and to get acquainted with the work already done by politicians and civil servants to push for their housing rights.

But just like with Zionism and anti-Zionism, when different people say the same word, “politics”, they mean vastly different things. To a politically engaged person – whether an activist, an NGO worker or a lobbyist – politics is an important, creaky but still operational mechanism that allows democracies to function. To most people, though – and most people are not politically engaged – politics in Israel means stagnant, widely despised political parties; contemptible politicians; principles for sale; corruption, nepotism; a remote and unaccessible parliament; wheeling and dealing; tycoons and politicians rubbing shoulders and ignoring people like you and me.

I myself am a politically engaged person, so I don’t mind saying that what I’m seeing here on the boulevard is politics at their finest: effective discussion of real issues, quickly developing respectful listening (so much more respectful than in the Knesset), communal responsibility grounded in ideology (“Folks,” pleads one of the speakers in her allotted 2 minutes, “clean up your stuff, because after we succeed they’ll send subcontracted workers to clean up our mess for slave wages, and we can’t allow that.” She’s met with applause), and a huge desire to master and understand political system and discourse (another one proposes learning circles on tax, economy, real estate markets etc; this, too is met with applause). Larger issues – especially the growing grip of a handful of ultra-rich families on Israeli economy – are certainly not shunned or forgotten, and demand to hold the government responsible for letting them run wild are repeated in almost every second comment.

The fact that the people operating this truly enchanting, organic and effective islet of popular democracy would not call any of this “politics” is not to be blamed on them. If there’s such an utter disconnect and disenchantment from existing political mechanisms it is not, as some critics would appear to imply, because the protesters are lazy; it is because the political mechanisms – from ministries to parliament – either failed to sell themselves to the actual citizenry, or didn’t have that much to sell in the first place.

Dahlia and many other critics are correct in saying there are remarkable parliamentarians doing crucial work for social justice – and, as she herself noted in her post, they were the only ones who came to visit the tents and weren’t booed. This would seem to show the burden of proof is on the politicians, especially the left-wing politicians, to persuade the protesters of their achievements or to persuade the protesters to help them achieve more.

Until this happens, the protesters will continue shunning politicians and abhorring the word “politics,” using some other word in their stead – for example, “revolution.” And if they succeed even in the narrowest (yet ever so ambitious) goal of the struggle – overhauling the mighty real-estate market – they will do something the Left has not managed to do in a generation: let Israelis feel the taste of popular victory and political empowerment for the first time in their lives. If that happens, in the long run these protesters may very well live up to this powerful R-word.