Statements by Israel’s prime minister give insight into the — problematic — way he views peace talks with the Palestinians. And Naftali Bennett’s emptiest threat yet. 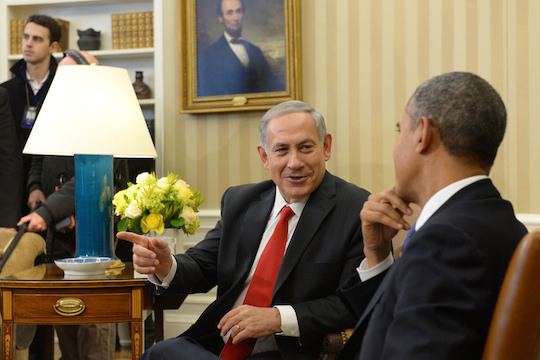 Israeli Prime Minister Benjamin Netanyahu on Sunday reiterated one of the most problematic views that he and his government hold — that any future Palestinian state, if there ever is one, will be a painful, albeit generous gift from him to the Palestinian people.

Responding to Palestinian President Mahmoud Abbas’s intent to accede to 15 international treaties and conventions, Netanyahu said at the start of the weekly cabinet meeting: “[The Palestinians] will achieve a state only by direct negotiations, not by empty statements and not by unilateral moves.”

There are two fallacies in Netanyahu’s statement.

First is the way Netanyahu views Palestinian foreign policy. If the wrong way to join treaties is “unilaterally,” then it holds that he believes such moves should be made multi- or bi-laterally, i.e., with Israel’s consent. In other words, the Palestinians need Israel’s permission in order to conduct their own foreign policy.

That fallacious worldview is directly related to Netanyahu’s second, more seriously flawed assertion — that the Palestinians can only achieve statehood through negotiations with Israel.

Such thinking brings backward the concept of peace talks over a decade, to a time when a Palestinian state wasn’t even on the table.

Earlier Sunday, Israeli Economy Minister Naftali Bennett made one of the more ridiculously empty threats against the Palestinians to be leveled by a senior Israeli official in a long time (save for Foreign Minister Avigdor Liberman’s plans for population transfer).

Emptier than his cohorts’ regular threats to annex portions — or all — of the West Bank, was what Bennett told Israel’s Army Radio Sunday morning (original Hebrew, English):

“We are currently preparing war crimes charges against Abu Mazen (Abbas) on two [different] rationales,” Bennett said. “One is the daily transfer of funds to Hamas, which fires rockets at Israeli citizens, and the second is the funding of terrorists and murderers themselves.”

Forget for a moment that Israel, too, transfers truckloads of cash to Hamas (Hebrew).

The truly phenomenal part of Bennett’s threat lies in the fact that in order to file war crimes charges against Abbas, Israel would need to ratify the Rome Statute. There is a very good reason Israel has not yet done so: it would open up Israeli officials to charges of war crimes, filed by the Palestinians or others.