Netanyahu’s recent boast that he has stopped all illegal immigration to Israel isn’t quite true: his southern border wall is only aimed at preventing black people from entering Israel irregularly.

The United States is on fire. After two weeks in office, President Donald Trump has already managed to sign a series of Executive Orders that have sparked massive protests. Chief among them are the new ban on immigration into the U.S. from Muslim-majority countries and the order to begin construction of the long-promised “giant wall” on the border with Mexico.

While thousands of Americans flooded to protest at airports where Muslim travelers were detained, and while many governments across the world including France and the Netherlands strongly condemned Trump’s actions, Israeli Prime Minister Benjamin Netanyahu took the opportunity to congratulate his American colleague and, more importantly, to boast of his own achievements when it comes to illegal immigration.

Reading Netanyahu’s tweet, one might assume that Israel’s border wall, built on the southern border with Egypt, put a stop to illegal immigration to Israel. But that would be an “alternative fact.”

Israel completed Netanyahu’s border fence along the Egyptian border in 2013, in response to the entry of African asylum seekers, mostly from Eritrea and Sudan, which had been steadily increasing since 2005. Eritrea’s government is widely considered to be Africa’s most oppressive regime, with an abysmal freedom of expression record and mandatory military service with no clear release date, creating what essentially amounts to a system of forced labor.

Sudanese asylum seekers in Israel come mostly from the Darfur and Nuba Mountains regions, as well as from South Sudan, a country that, since its founding, has been in the midst of civil war. Asylum seekers from both countries are granted refugee status in the vast majority of cases in Europe and North America, yet Israel refuses to check their asylum requests. Instead, African asylum seekers in Israel are detained and pushed to leave the country without having gone through the refugee status determination process.

Much has been written about Israel’s refusal to accept refugees, which goes against the UN Refugee Convention. It is often pointed out that Israel itself is a country founded by refugees and was one of the central forces behind the formulation of that very convention. How can a state founded by a great number of Jews who were forced to flee pogroms and extermination be so reluctant to accept refugees?

Netanyahu and his administration, like Trump, use all the common excuses: Africans are criminals, they take jobs away from the struggling working class, they are involved in Islamic terrorism. Never mind that police figures show they commit fewer crimes when compared to the general population, or that Israel invites migrant workers to take jobs Israelis don’t want to do (thus enriching the manpower companies that brings them to Israel), and that no African migrant has ever been accused of terrorism.

Targeting immigration based on race

The border fence is often regarded as a success by the Israeli government, as it has significantly reduced the immigration of asylum seekers from these countries. However, there are other significant factors that have led to this situation.

In February 2012, the International Criminal Court ruled that a deal signed between Italian Prime Minister Silvio Berlusconi and Libyan dictator Muammar Gaddafi, according to which ships of migrants headed for Italy would be sent back, is illegal. After the policy was revoked (aided by the deposition of Gaddafi), the path across the treacherous Mediterranean was reopened. Many asylum seekers chose to take to the water in hopes of recognition, rights, and a decent life rather than to travel by land to Israel — a country that provides them none of these. 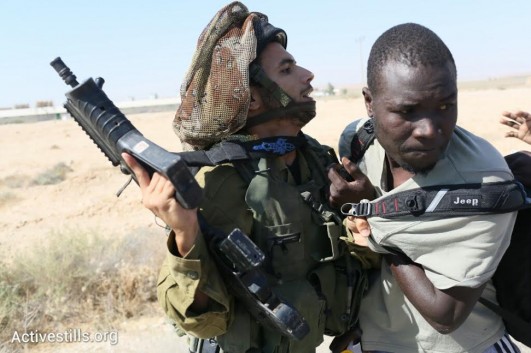 An Israeli soldier confronts an African asylum seeker during the march to the border with the Sinai Peninsula. (photo: Oren Ziv/Activestills.org)

According to the Hotline for Refugees and Migrants, there is also a complex system in place on the border, which includes cooperation with the Egyptian army. Using security cameras and constant monitoring, the IDF scans an area four kilometers into Egypt’s Sinai desert. When a potential migrant is spotted, the Egyptian border guards are alerted and make an arrest. The migrant is then sent to an Egyptian prison where they will wait to be deported to their country of origin, often risking their lives.

Netanyahu claims that the border wall “stopped all illegal immigration.” But just like in the U.S., the vast majority of illegal immigrants came to Israel by air. In 2016, for example, the Israeli government estimated that there were 40,721 “infiltrators” (the government’s official term for African asylum seekers), 16,737 mostly Asian illegal work migrants (who overstayed their work visa or are working in an unauthorized field of work), and 78,500 people who entered with a tourist visa and are currently living in Israel illegally.

The majority of these tourists are white Europeans, predominantly from Eastern Europe. In other words, white illegal immigrants who entered by plane are almost double the number Africans of who entered Israel through its southern border — and that is after taking into account the thousands of Africans who were forced to leave the country.

So why does Netanyahu boast that the border fence stopped all illegal immigration? The answer is simple: because it significantly reduced immigration of black people.

Israel’s migration policy is inherently discriminatory: Jews can obtain citizenship almost automatically (provided, at least, you are the “right” kind of Jew). Non-Jews, even if they were born in Israel to non-citizen parents — and especially if they are related to Palestinians or are themselves Palestinians who were forced out during and after the Nakba in 1948 —  are virtually barred from becoming citizens. It has been suggested that one of the reasons this system was put in place was to avoid dealing with the Palestinian refugee problem that Israel itself created.

The inequality faced by Palestinian refugees is well known. However, African asylum seekers present a different example of the inherent racism of Israel’s immigration policy: although the majority of illegal immigrants to Israel are white Europeans who entered the country by air, they are largely undiscussed, while Africans — as well as work migrants who remained in the country beyond their permitted stay — are being targeted, deported and jailed. This is not to say that white illegal immigrants should be targeted, of course: they do no harm and should be naturalized. But the fact that Netanyahu chooses to ignore their existence shows that he is not actually worried about illegal immigration in of itself. Rather, his worries are race-based.

It is crucial that Americans — and especially American Jews — who oppose Trump’s racist immigration policy hold Israel to the same standard that they hold their own government. Until Israel ceases to enforce a race-based immigration policy, and until it allows entry and status to refugees escaping forced labor and genocide, it will be no better than Trump’s America. It’s time to tear down that wall.