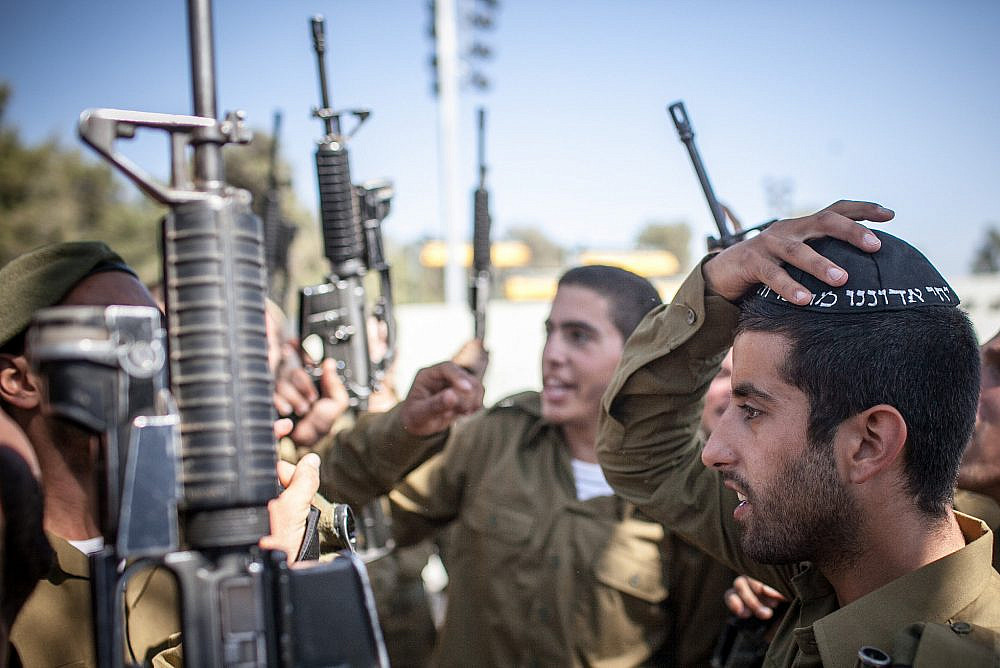 Religious soldiers attend a swearing-in ceremony as they enter the Orthodox Netzah Yehuda battalion of the Israeli army, May 31, 2012. (Noam Moskowitz/FLASH90)

In the early hours of Wednesday, Jan. 12, Omar Asad was driving home from a family gathering when Israeli soldiers — who were conducting a nighttime raid on Asad’s home village of Jiljilya in the occupied West Bank — stopped his car and pulled him out. Other Palestinians detained alongside Asad reported that the troops blindfolded and handcuffed the 80-year-old man, before beating him, dragging him along the floor, and finally leaving him in an abandoned building in the winter cold. A few hours later, Asad was found dead in that same building.

When the story first broke, the details largely focused on Asad’s age and the fact that he was an American citizen — both factors that contributed to the higher-than-usual international media attention on the killing of a Palestinian by Israeli forces. The U.S. State Department asked for a “thorough criminal investigation”; Israel, after its initial customary hand-waving that included denying any connection between Asad’s death and his treatment at the hands of the army, removed two officers from their posts and announced a military police investigation.

As these developments unfolded, a further detail came to light in the course of the media’s reporting: that the soldiers responsible for Asad’s death were members of an army battalion called Netzah Yehuda (“Eternal Judea”). Netzah Yehuda’s grim track record of abuses soon came under fresh scrutiny, along with criticisms of the battalion that resurface every time it is involved in a new scandal.

Yet while those criticisms are necessary and merited, they unduly focus on the specificity of Netzah Yehuda’s identity as a religious military outfit, while almost universally failing to address the wider system in which the battalion carries out its abuses — and which cultivates the ideology that leads to such violence.

Understanding Netzah Yehuda’s history and background is undoubtedly important, but that examination should be a prelude to addressing the battalion’s place in Israel’s apparatus of domination over Palestinians — not to extricate it from that regime altogether.

A history of abuse

Formed in 1999, Netzah Yehuda was initially a small unit established with the intention of encouraging Haredi men to enlist in the Israeli army, on the understanding that they would be able to maintain their religious lifestyle. Often referred to in Israeli media as the “Haredi battalion,” in 2005 it became part of the new counterterrorism-focused Kfir Brigade, which the IDF describes as being “at the forefront of the war against Palestinian terrorism.”

The Kfir Brigade has its own broad history of abuses and killings of Palestinians. (There have also been abuses within its own ranks, including against Netzah Yehuda recruits.) But Netzah Yehuda itself — which today consists primarily of Haredi, Hardali (Zionist-Haredi), and religious-Zionist recruits — has been specifically and consistently involved in many notorious incidents of violence, including torture, as well as other improper conduct. 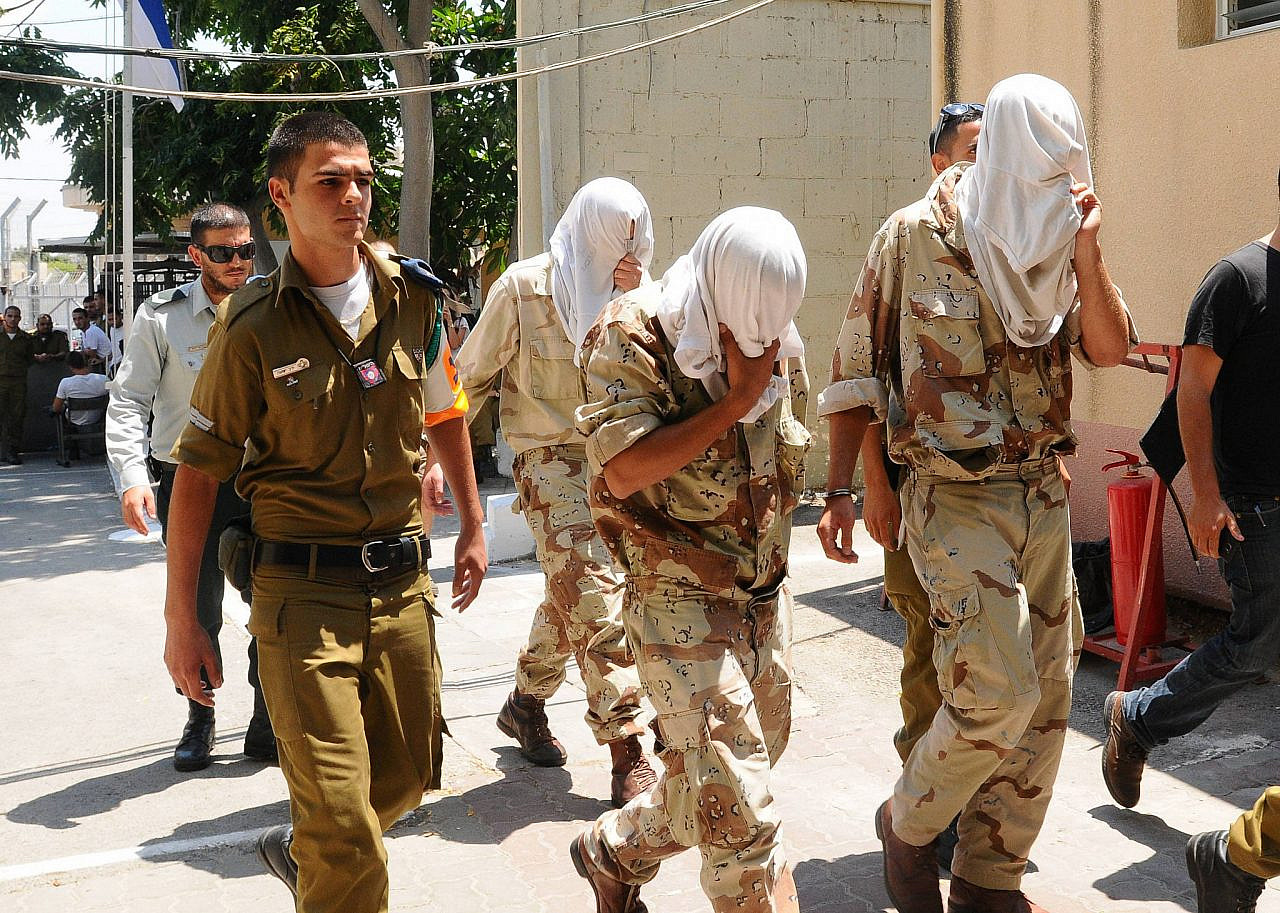 Suspects from the Kfir Brigade, accused of injuring a recruit during a hazing ritual, arrive for their court hearing in Jaffa, August 5, 2012. (Yossi Zeliger/Flash90)

For example, in separate incidents in 2015 just a few months apart, a Netzah Yehuda sniper shot a seemingly unarmed Palestinian with live ammunition during a protest in Silwad near Ramallah, and several soldiers tortured Palestinian detainees using electric shocks. At the end of 2018, Netzah Yehuda troops got into a physical altercation with Border Police, who were arresting Israeli settlers for throwing stones, in an effort to get the suspects released.

The following month, Netzah Yehuda soldiers arrested two Palestinians — father and son — following a shooting attack that killed two soldiers in the battalion; the men were suspected of aiding the attacker. The arresting soldiers handcuffed, blindfolded and beat them, and forced the son to watch them assaulting his father.

In October 2019, Netzah Yehuda soldiers were caught on video assaulting Bedouin citizens at a gas station near Rahat in the Naqab/Negev. A year later, another group of soldiers was filmed, while in uniform, taunting anti-Netanyahu protesters at a demonstration outside the then-prime minister’s official residence in Jerusalem. In September last year, soldiers in the battalion were accused of physically and sexually abusing a Palestinian detainee. Then, in January, came the beating of Omar Asad — an assault that ended with his suffering a fatal heart attack.

The ‘wrong’ kind of violence

Amid the fallout from the killing of Asad, this litany of violent abuses has once again come under the microscope. The usual criticisms about the battalion have been revived by Israeli liberal commentators and military insiders alike: that its recruits disobey orders; that the soldiers’ ideological background makes Netzah Yehuda destined to be a “West Bank militia“; and that it is too closely knitted into the fabric of religious settler society, from which many of the troops hail (among them are some members of the hilltop youth, who on the whole violently reject the legitimacy of state institutions).

There have even been suggestions from some quarters — including within the Defense Ministry — that Netzah Yehuda should be dismantled altogether, or at the very least pulled from serving around Ramallah and Jenin, two major Palestinian cities in the West Bank that are ostensibly under full Palestinian Authority control, but which are subject to regular Israeli military incursions.

The intensity of the criticisms against Netzah Yehuda has not gone unremarked upon in the Israeli media. Among the backlash to the condemnations — backlash which has largely come from the battalion’s army peers — has been the suggestion that while other Israeli military units have caused more harm, it is perhaps “more comfortable for people to speak out against a… mainly Haredi battalion,” in the words of a former Netzah Yehuda commander.

There is merit to this accusation. The majority of Netzah Yehuda’s recruits are from backgrounds that are routinely “othered” by Israel’s largely Ashkenazi social and political elites — not only Haredim and Hardalim, but specifically Mizrahi Orthodox soldiers, who form a central component of the battalion. Here, as in other high-profile incidents involving deadly violence against Palestinians, Israel’s tendency to outsource the ugliest functions of its colonizing apparatus to marginalized social groups is a fundamental, yet frequently overlooked, piece of the puzzle. 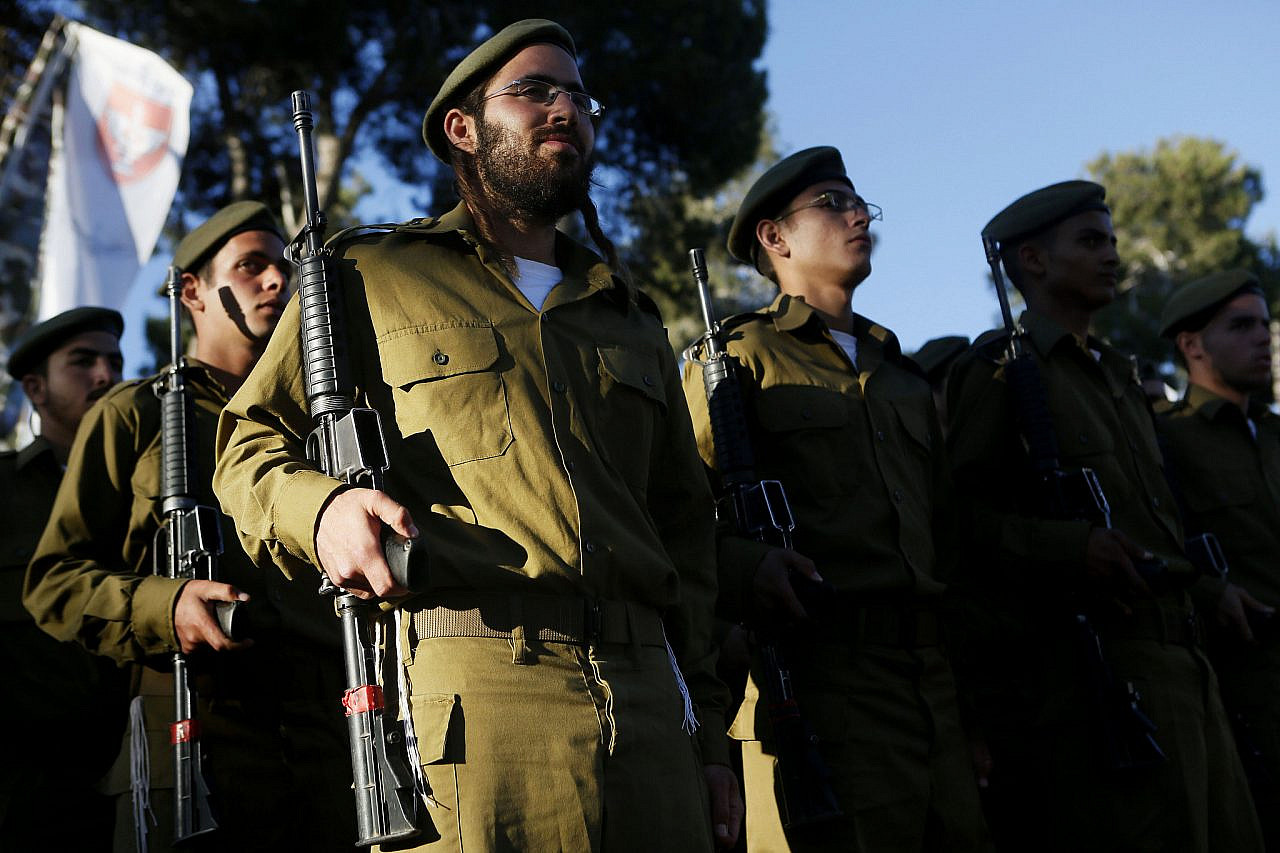 Even as these criticisms get at part of the bigger picture, however, they still hit a wall: they rest on the assumption that the battalion’s composition and behavior, as contrasted with that of the rest of the army, are uniquely deviant.

There is, by extension, a two-fold implication here: firstly, that physical state violence against Palestinians is somehow exceptional and purely reactive, rather than being a constitutive element of apartheid and occupation; and, secondly, that within those exceptions, Netzah Yehuda is enacting the “wrong” kind of violence — with the unspoken corollary that there is a “correct” mode of violence to which the battalion is failing to adhere.

The “bad apples” argument that has attached itself to Netzah Yehuda is well-trodden territory: it is summarily deployed by Israel and its supporters whenever Jewish terrorism and settler violence hit the headlines, as they have with increasing regularity over the past few years.

With Netzah Yehuda, however, it is a slightly trickier claim to make. Far-right Israelis who conduct acts of terrorism while out of uniform have habitually provided an avatar onto which the state can offload responsibility — and feign accountability — for the violence produced by its governing principle of ethnic supremacism, while utterly ignoring the supremacist modus operandi itself. This mechanism has also served to obscure how West Bank settlers effectively act as an arm of the state, and to further blur the lines between their authority and that of the army.

It’s a system that works fairly well for the state and its representatives, but that stumbles somewhat when the call is coming, so to speak, from inside the house — as it is in cases such as the killing of Omar Asad.

That is why, when the Israeli army does occasionally investigate itself, the investigation will be at best perfunctory, and at worst so inadequate and slapdash as to actually display contempt: tug too hard at any single threads of excessive force, and the system will start to unravel. Far better, instead, to make excuses that decenter the act of violence itself (the soldiers were particularly stressed that day; there was a misjudgment; orders were disobeyed; ethical standards were not met), and emphasize personal rather than systemic responsibility — especially when the individuals in the spotlight are part of the “othered” classes.

In the vanishingly rare instances in which an army self-investigation results in some kind of conviction and punishment, the accused will almost invariably be a low-ranking infantry member who has carried out an act of spontaneous, face-to-face violence. That, in Israel’s moral and social calculus, is a “lapse” that merits punishment or a reprimand. The dropping of a one-ton bomb in a residential Gaza neighborhood that wipes out a Palestinian family, however? Not so much. 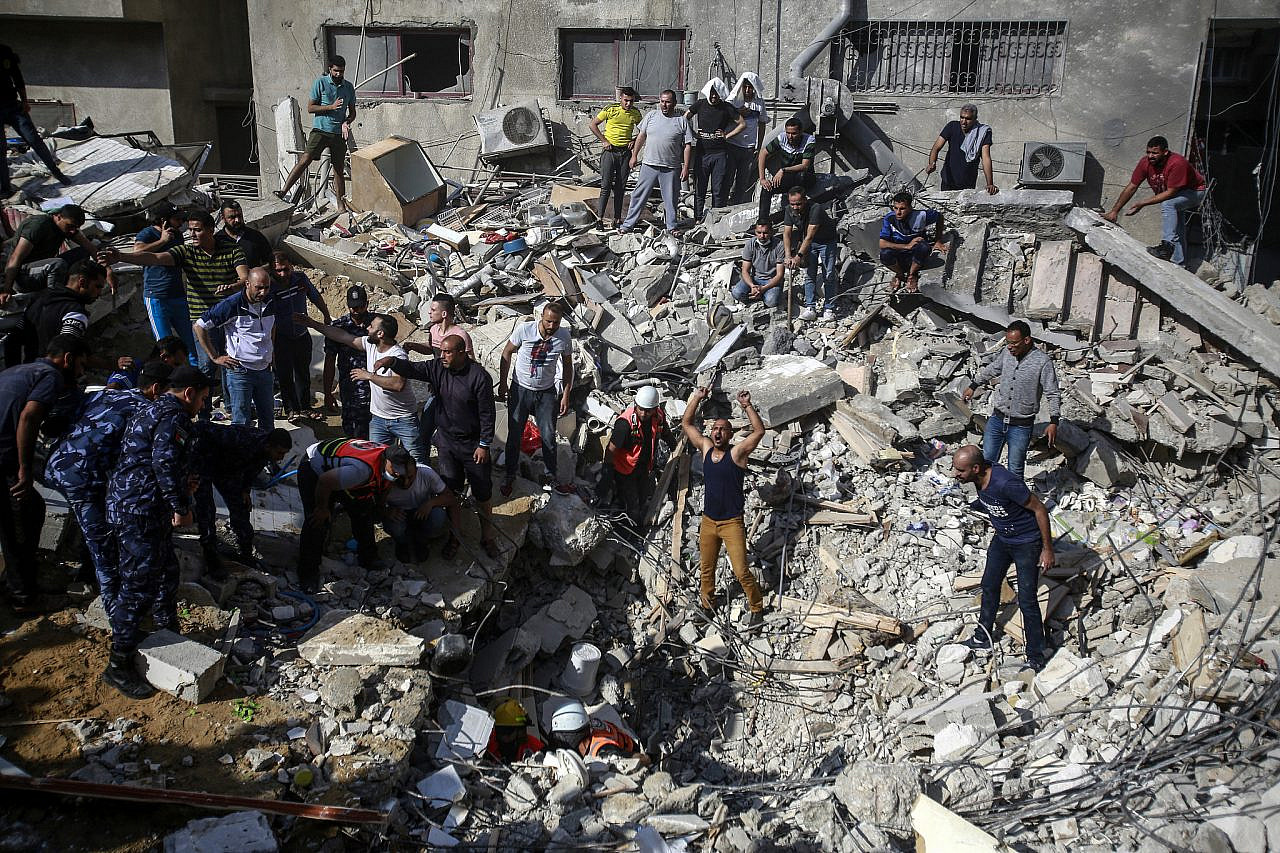 Palestinian rescue workers recover the bodies of victims amid rubble at the site of Israeli air strikes, Gaza City, May 16, 2021. (Atia Mohammed/Flash90)

For Israeli policymakers and the wider network of apologists for the army’s role as a military occupier, who prefer to shield their eyes from the environment that has produced Netzah Yehuda’s “aberrant” violence, the proposal to “tackle” the battalion by shuffling it around or disbanding it altogether may very well make them feel as if a problem has been solved. And they will likely consider any remedial action against Netzah Yehuda as proof that the Israeli military’s ethical code of “purity of arms” remains a defensible, workable concept for an army tasked with maintaining a segregationist regime.

None of this is to dismiss Netzah Yehuda’s appalling transgressions, nor the catastrophic consequences of the battalion’s violence. On that front, it is true that the proposed interventions may make a material difference in some of the areas Netzah Yehuda currently patrols in the occupied territories.

But by exceptionalizing Netzah Yehuda’s violence, what such an approach will also do is preserve the fantasy that most of the physical harm the state causes Palestinians on both sides of the Green Line is both justified and unremarkable, and that these incidents are exceptions that buck the rule of rightful, and righteous, violence. This holds especially true when the distinctions between “right” and “wrong” violence are arbitrated by the very authority that is responsible for the overwhelming majority of that brutality. That serves the cause of apartheid rule far more than the actions of a solitary, ostensibly “rogue” group of religious soldiers.