Israeli and Iranian activists met in Germany to plan a follow-up to the viral solidarity campaign that swept the web with messages of mutual love earlier this year. Now they are stepping up their slogans, and getting ready to put messages of peace from Iran on the streets of Tel Aviv. Collection of posters from the Israel loves Iran Facebook page

Nobody could have anticipated the incredible success of the Israel loves Iran Facebook campaign started last March by two Israeli graphic designers. Messages of love and solidarity by common Israelis to Iranians flooded the web, with the recurring message: “We will never bomb your country – we love you.” It wasn’t long before Iranians living in exile began to send similar messages to Israelis, and some such voices even came out of the Islamic Republic itself, but with the citizens’ faces usually hidden. People from both countries started to talk to each other on the net directly, above their governments’ heads, and formed friendships.

Following up on the success of the previous campaign, Ronny Edry, one of the two designers-turned-peace-activists, organized a delegation that met with Iranians in Munich three weeks ago, as the war drums were starting to beat harder. The meeting led to a new campaign with a stronger message: “Not ready to die in your war”, designed in a similar fashion to the previous one, and which began to appear on Facebook profiles across the Middle East. 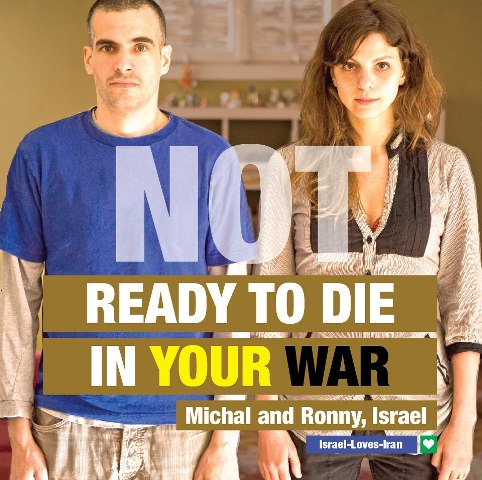 “We stressed the point of it being ‘their’ war to signal that this is a war of politicians and not between the people,” says Edry. “Perhaps because of that we are now suddenly getting hundreds if not thousands of images from Iranians in Iran, who are willing to have their faces published, and not just a shadow or an arm or anything like that which we got the previous time around. This is what made us feel that we have to show Israelis these pictures, to advertise for peace as they advertise for Cola, and to have your average person on the streets of Tel Aviv and the surrounding metropolis see beautiful pictures of Iranians smiling at him or her from a bus stop advertisement, not in order to sell jeans but to sell regional peace.” Iranian women in a message to Israelis

Edry estimates that a campaign on such a scale would cost $150,000, and in order to reach the sum he has opened up a fundraising page, which so far has raised about $4,000. “I think there’s a huge difference between advertising properly, and printing posters and putting them up on walls only for them to be removed and for you to be fined by the municipality,” he says. “The effect of this message, of an Iranian soldier in uniform calling for peace for example, is much stronger if it’s an official campaign with billboards that last and look good. I know we haven’t gotten enough money yet, and if we don’t make it than we’ll settle for something smaller like ads in the newspaper, but I’m hopeful that the media buzz around this, which takes place especially in international and not local media for some reason, will help us get the donations we need.” 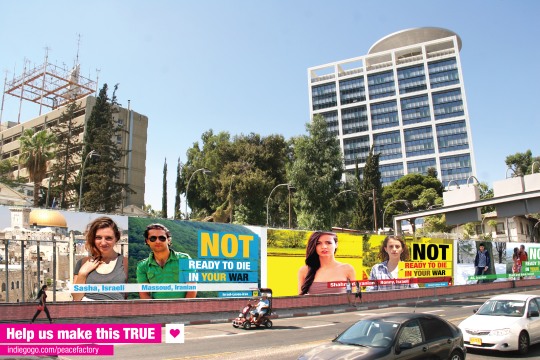 Meanwhile, more and more pictures are posted on the group’s Facebook page by the hour, mostly by Israelis and Iranians but some also by Americans, Europeans, Arabs and others, and a spin-off campaign is also picking up with the slogan “ready to live in peace.”

While these net initiatives grow, talk of a possible attack on Iran has recently been pushed to the back pages of newspapers, either because so much has been said already or because the heads of state might have come off the idea (or the spin). Either way the direct forms of contact between citizens might possibly flourish in the future into new cross national political organizations, which could possibly have an effect both here and there. But that, for now, is only a wild estimate. 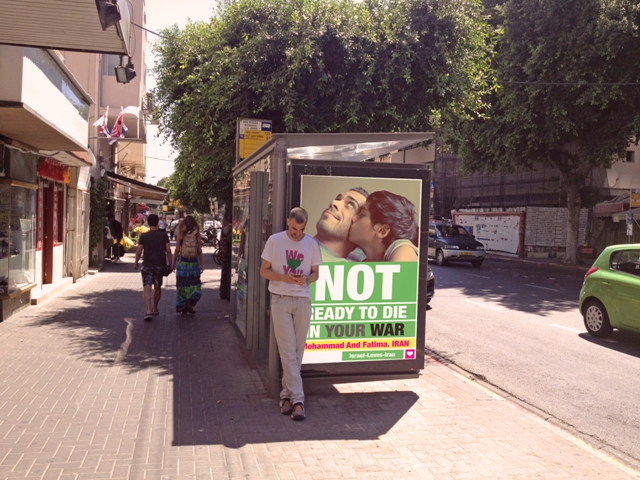