Members of Knesset say law builds a ‘collective identity’ that will preserve the ‘values of democracy.’

A group of MKs from Yisrael Beiteinu, Likud and Jewish Home recently submitted a bill that calls to rescind the status of Arabic as an official language in Israel.

On its own, the bill is neither out of the ordinary nor surprising, as it joins a long list of draft laws that were brought before the Knesset plenum over the past years, including the Citizenship Law, the Nakba Law, the Loyalty Law, the Basic Law that declares Israel as the nation state of the Jewish people, and so on. After several decades of dispossessing its Palestinian citizens from their lands, the state is now moving on to dispossess them of their culture, including their language, identity and sense of belonging. 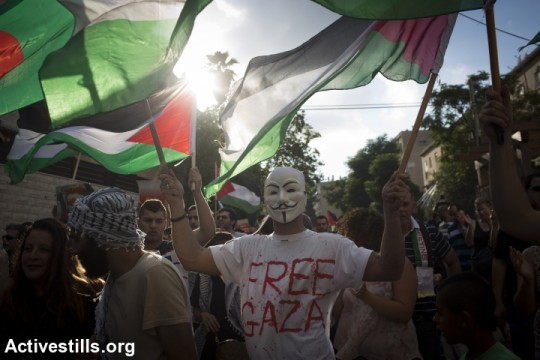 The identity of the lawmakers behind the bill is not surprising, nor are their party affiliations, which that have long ceased to be part of the right-wing margins and have reached deep into the heart of the ruling party. Let us not forget the benefactor of the bill, “The Lobby for the Strengthening of the Hebrew Language.” One of its members is Dr. Zvi Zameret, the former chairman of the Pedagogical Secretariat of Israel’s Education Ministry. He is the same man who was behind the widespread cuts in civics studies in favor of Jewish studies, as well as the “updating” of the contents of civics books in the spirit of Zionism.

What I find interesting about the current proposal is its wording:

Passing this law will contribute to social cohesion in the State of Israel and to building a collective identity necessary to foster mutual trust in society and preserve the values of democracy.

I won’t waste my time writing about the so-called “values of democracy” that this bill seeks to promote. However, it is important to look closely at its other goals: social cohesion, building a collective identity and mutual trust in society. The authors of the draft law are actually saying, unanimously, that excluding Arabic – and thus the people who speak the language – is a condition for social cohesion in Israel, and that a collective Israeli identity does not include Arabic-speaking citizens.

It seems to me that in today’s political context, it is no coincidence that this is seen as a form of “social cohesion.” The Jewish public in Israel has spent the last two months celebrating that oh-so-evasive “social cohesion,” whose bedrock is made up of unrestrained militarism and growing nationalism.

This social cohesion is mainly expressed by the media’s avoidance of asking the necessary questions and telling the public what needs to be told. Instead, it blathers on in an endless loop about “the strength of the home front” or our collective embrace of the IDF. When the media doesn’t cover a series of radical, anti-social moves by the government under the guise of war [Hebrew], the term “social cohesion” becomes meaningless – nothing more than an empty, nationalist shell. It is obvious that this shell has no room for Palestinian citizens. 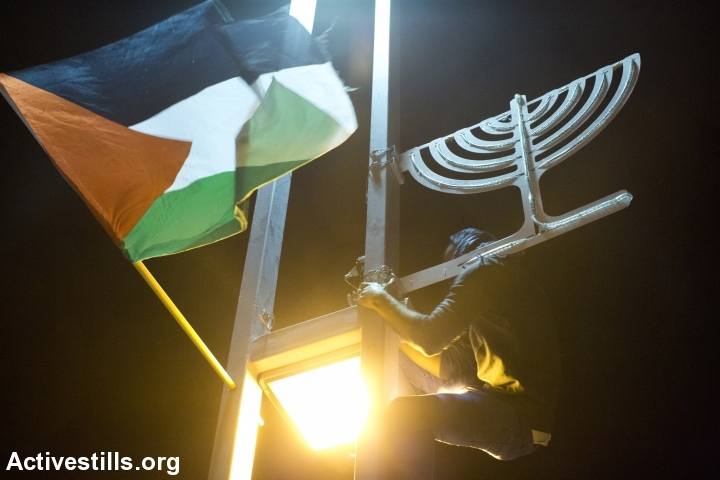 A demonstration climb an electric pole and place a Palestinian flag on top during a Day Of Rage protest against the Prawer-Begin Plan, Haifa, Israel, November 30, 2013.

In the end, one must praise the wording of the draft bill, as it reveals, once and for all, the lie behind the ethos of individual integration that the government has tried to sell to its Arab citizens for so many years (while cleverly winking at its Jewish population). The Palestinian citizens of Israel are discriminated against through numerous economic and social mechanisms, and are oppressed as a collective, most of time through legislation.

It is time to wake up from this false dream of integration, and support Palestinian citizens in their demand for political rights and the recognition of the Palestinian minority as a national one, with full autonomy in everything having to do with managing the educational and cultural systems in their communities. This, of course, alongside the struggle for full and equal civil rights for everyone with Israeli citizenship.

An aside: someone ought to speak to MK Shimon Ohayon (Yisrael Beiteinu) about the cultural impact that excluding Arabic from the public sphere will have on his community. But that’s a whole other story.

Orly Noy is a Mizrahi activist, translator and writer for Local Call. Read this article in Hebrew.