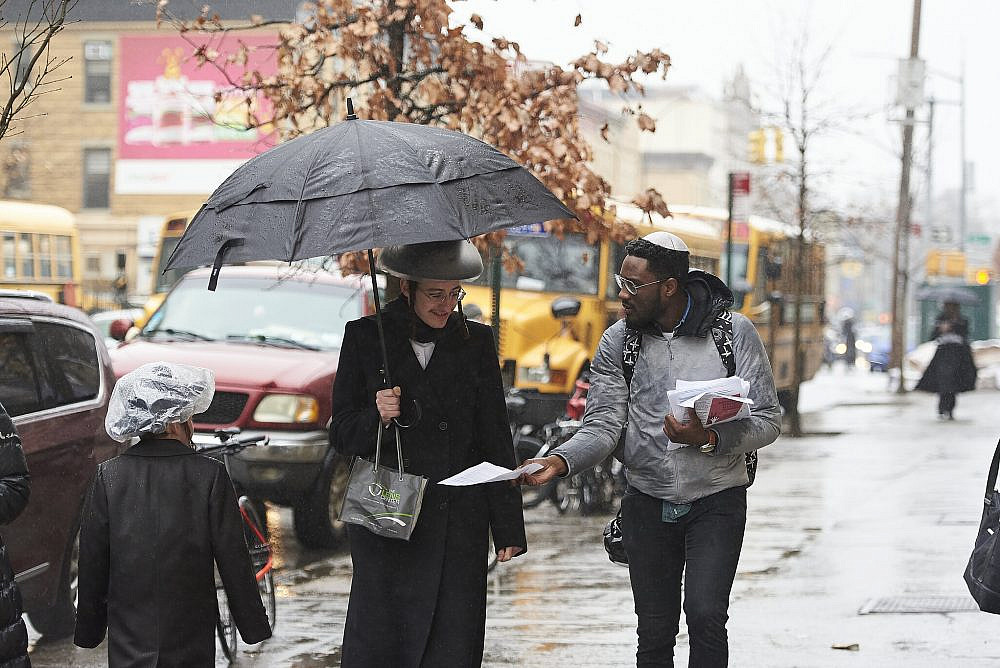 In the final week of December, two 21-year-old Jewish men were assaulted at a FootLocker store in the Bay Ridge neighborhood of Brooklyn, New York. One of them, Blake Zavadsky, told the New York Post that his attackers, two other New Yorkers, “asked us what we were doing in their neighborhood,” and “called us ‘dirty Jews.’” According to Zavadsky, who was wearing a sweatshirt bearing the logo of the Israel Defense Forces, one of the attackers then said to him that “if I don’t take my sweatshirt off, he’s going to rock me.”

When Zavadsky refused, one of his attackers allegedly punched him twice in the face and spilled ice coffee on his sweatshirt. The attackers threatened to harm the other Jewish man, Ilan Kaganovich, if he intervened. According to both Zavadsky and Kaganovich, bystanders did not try to help.

At Jews for Racial & Economic Justice (JFREJ), we unequivocally condemn acts of violence against Jews and all New Yorkers. Everyone should be able to walk the streets of our city, dressed as they choose, free from violence. While there are many valid reasons to feel anger toward or distressed by the Israeli military that have nothing to do with antisemitism, the fact remains that punching someone for any reason, including for wearing an IDF sweatshirt, is still a violent act. And unlike anger over someone wearing IDF clothing, using the slur “dirty Jew” is unquestionably antisemitic.

Yet it was the IDF sweatshirt, not the slur, that both the New York Post and local right-wing politicians emphasized as the incident’s key detail. A small online movement tried to get the hashtag #IDFShirtChallenge trending, encouraging people to take selfies wearing clothing with Israeli army branding.

Republican NYC Council Member Inna Vernikov then promptly organized a rally on January 2 in Bensonhurst, Brooklyn — an area right near Bay Ridge, a predominantly Arab and Palestinian neighborhood — co-sponsored by a number of right-wing Jewish groups including Americans Against Antisemitism, End Jew Hatred, and Legion Self-Defense. The flier invited attendees to “Bring your own IDF hoodie.” 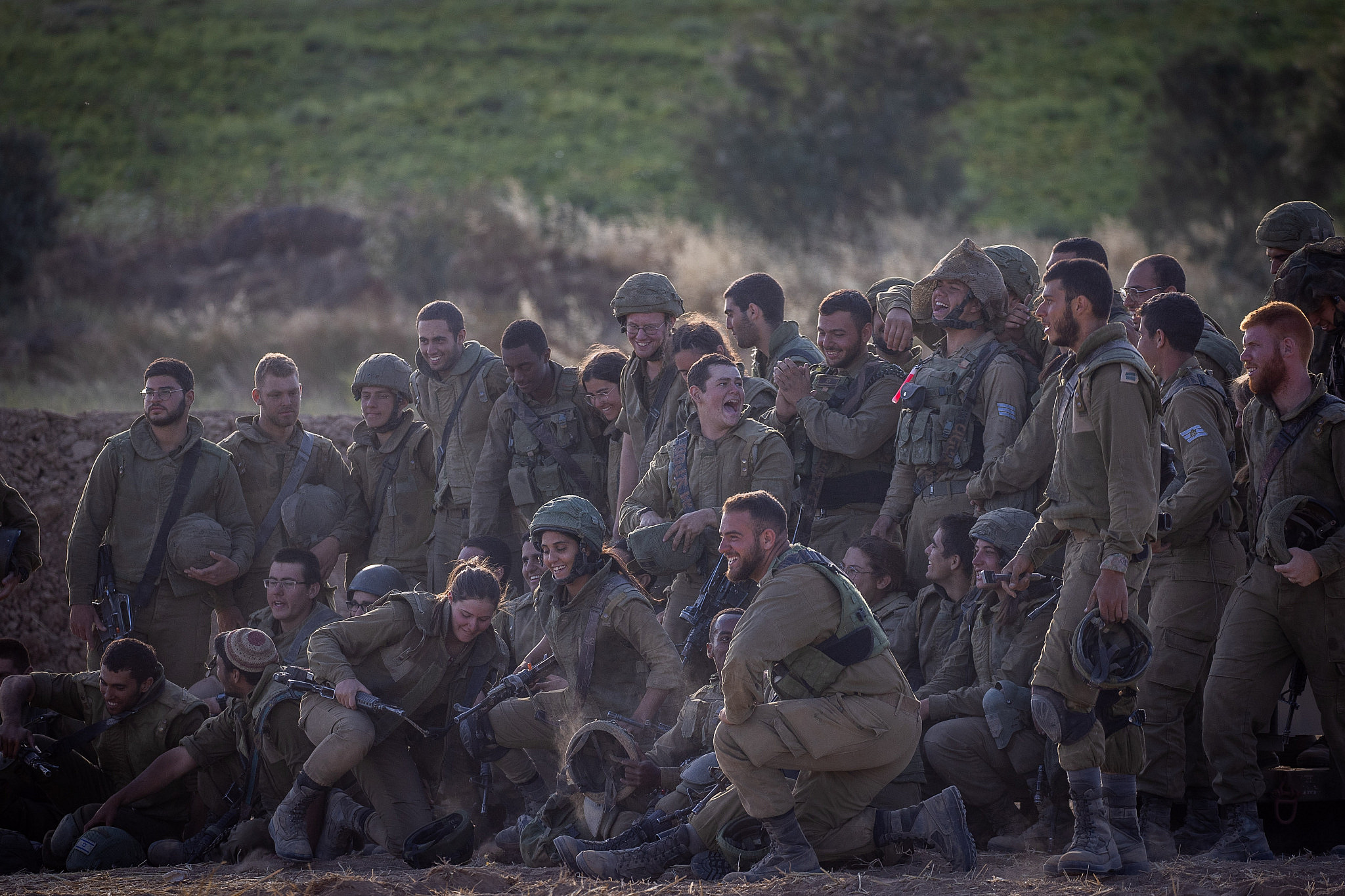 Israeli soldiers from the IDF Artillery Corps seen at a staging area near the Israeli border with Gaza on May 17, 2021. (Yonatan Sindel/Flash90)

Given its location and call to action, it is clear that this rally was not a community effort to prevent hate violence; rather, it was an instigation designed to fuel division and fear among Jewish, Palestinian, Arab, and Muslim New Yorkers.

The track records of key individuals and groups behind the event further reflects this intention. Americans Against Antisemitism, for example, is led by former New York Assembly Member Dov Hikind, a former member of Meir Kahane’s violent, far-right Jewish Defense League. Hikind’s history of misogyny, racism, and Islamophobia is legendary in NYC politics, including his decision to wear blackface at a Purim party in 2013 — something for which he still refuses to apologize.

End Jew Hatred’s co-founder, meanwhile, is attorney and talking head Brooke Goldstein, who infamously claimed on national television that Hillary Clinton senior aide Huma Abedin, who is Muslim and of Indian and Pakistani descent, was “connected with Islamists who want to kill us,” positing that this must mean Abedin’s then-husband, disgraced former Congressman Anthony Weiner, was “so un-attracted” to her.

These right-wing figures and groups do not reflect our Jewish values or the inclusive spirit of New York City. Moreover, they have a long history of portraying legitimate, non-violent criticism of the Israeli government as antisemitism. Rather than rejecting the antisemitic conflation of New York Jews with the Israeli state, organizers chose to reinforce the emblem of the IDF as a symbol of Jewish identity.

For many New Yorkers — Jews, Muslims, Arabs, and especially Palestinians — the Israeli army symbolizes occupation, human rights abuses, and apartheid. Its logo does not reflect the values or priorities of New York’s diverse Jewish population, and suggesting that it does perpetuates antisemitism and further pits our communities against each other. 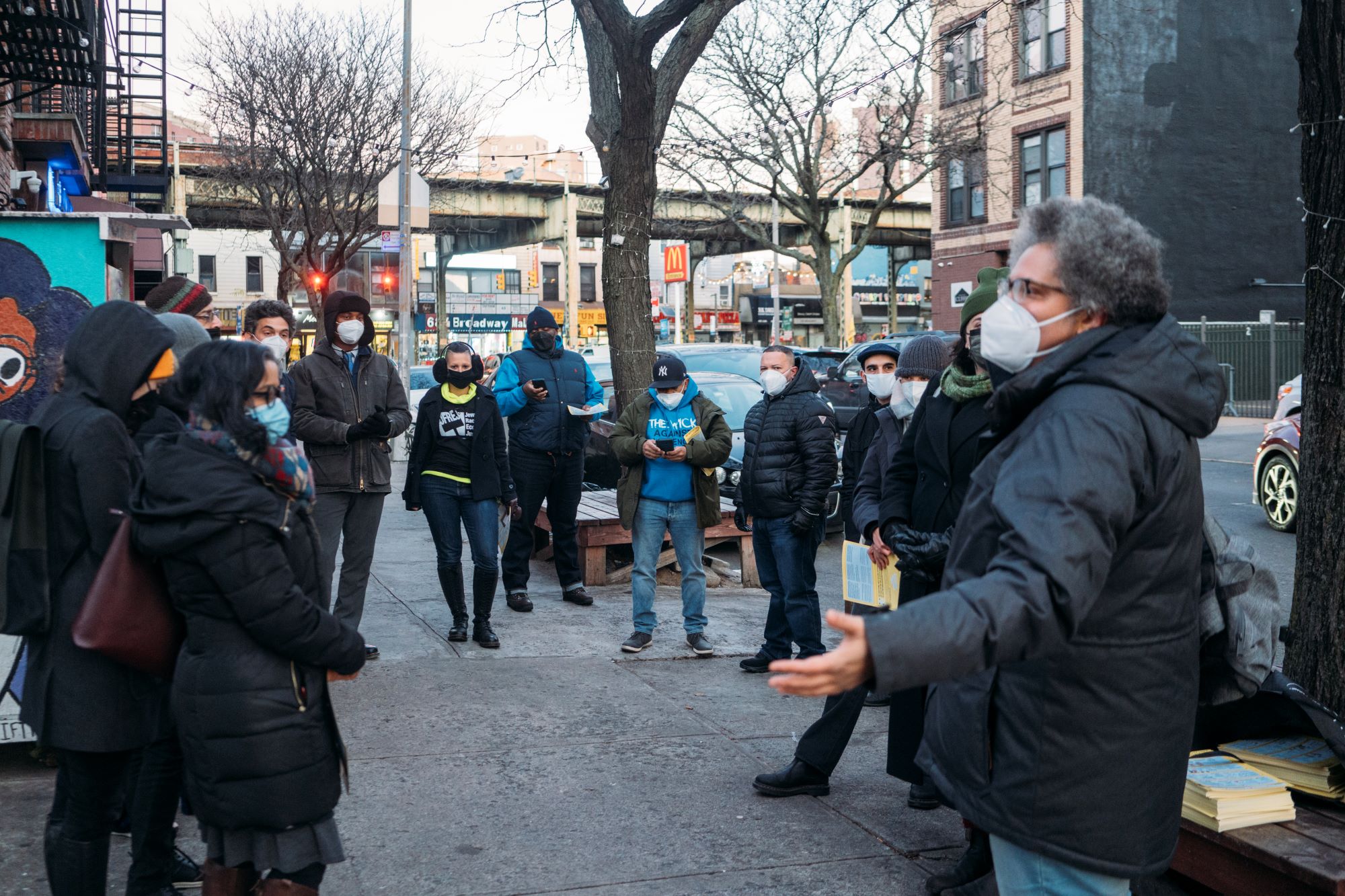 At JFREJ, our Jewish identities are not rooted in combat or violence. They are derived from our Jewish values of love, justice, solidarity, and teshuva. We believe in the Bundist and diasporist philosophy of doykait, or “hereness” — that the place we live is where we build relationships, and fight for justice for ourselves and our neighbors. Doykait affirms that there is no safety if it is only for Jews, just as there is no safety if it excludes us.

The sponsors of last Sunday’s rally do not share this vision. When the protest’s organizer, Council Member Vernikov, was asked what policies she wanted to see implemented in response to the attacks, all she could offer was to “refund the police.” But besides the fact that the NYPD was never even defunded in the first place, data and common sense show that hate violence and racist incidents are most effectively prevented by our communities, not by the police or by prosecutors who mete out punishment after the fact. In a tragic illustration of the need for alternative solutions, a Hasidic man was attacked in Williamsburg just hours after the rally took place.

JFREJ and our partners in the NYC Against Hate coalition have spent the past three years fighting to robustly resource new approaches that are built on three pillars: to prevent violence through education and community-building; to interrupt violence through community-based bystander trainings and rapid response at the local level; and to repair through restorative justice, counseling, and peer-support. By giving New Yorkers the tools and information we need to look out for each other, we are showing that all of us are responsible for our city and the safety of everyone in it.

That is why, while the organizers of the pro-IDF rally were happy to cynically exploit real Jewish fear and anger, we at JFREJ spent the day with our longtime partners at the Bay Ridge-based Arab American Association of New York (AAANY), demonstrating the kind of solidarity and community that can actually make New York a safer place.

Joined by four new members of the New York City Council, we organized a neighborhood canvass to talk about community safety, hate violence prevention, and bystander intervention. And two days after the Williamsburg attack on the Hasidic man, we organized another community safety canvass in the neighborhood, attended by local violence-interruption groups and representatives of various political offices — including the Mayor’s Office for the Prevention of Hate Crimes and the New York City Commission on Human Rights. 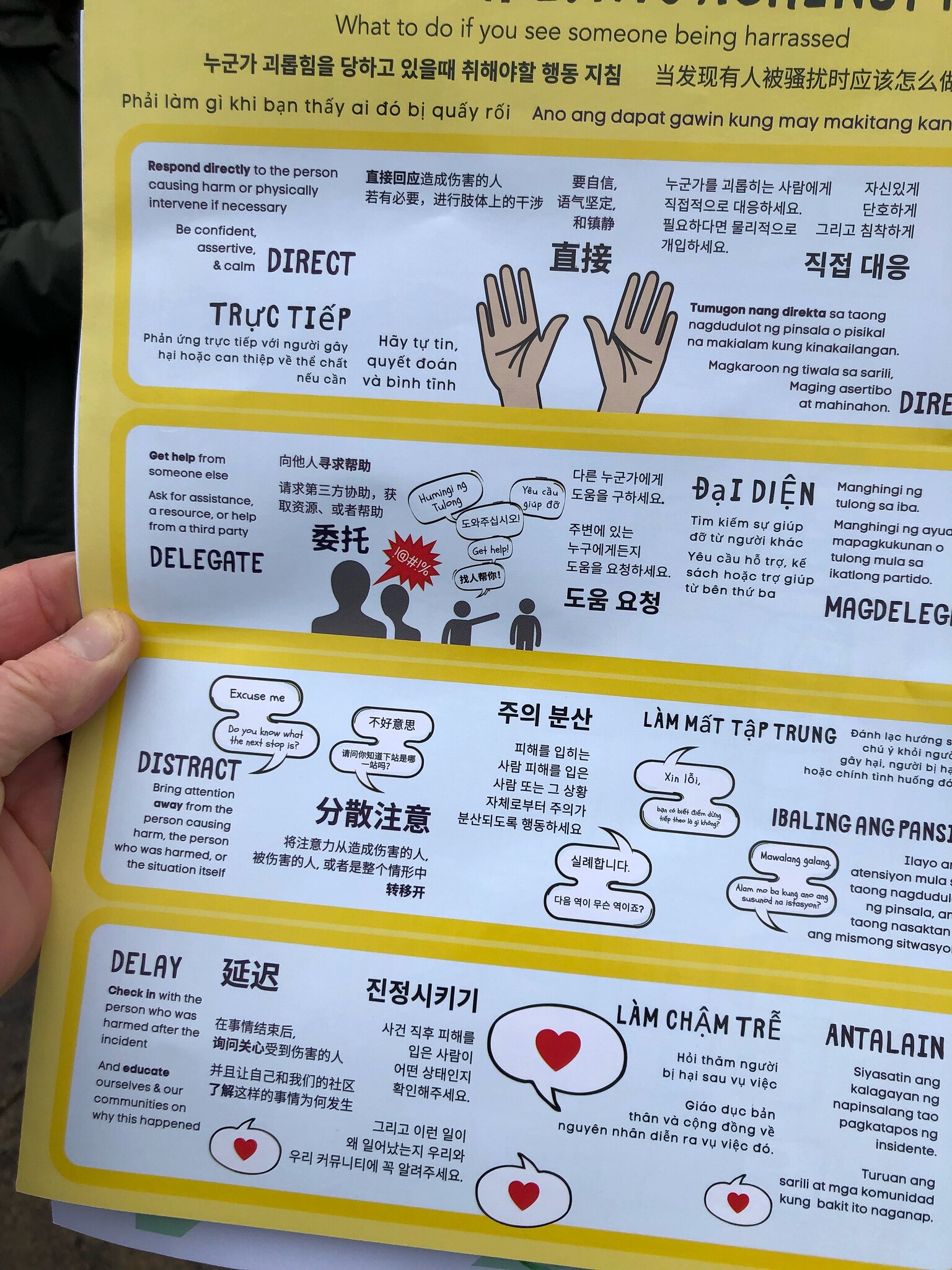 New York City invested $1 million in this kind of work in 2019. But only one year later, this program — not the NYPD — is what the city chose to defund, even as rates of hate violence increased nationwide. However, we have just elected a new city government, with a powerful progressive bloc in city council that believes in this type of restorative work. These members are not just committed to funding the program, but also to participating in it with us — just as we saw at our events last week.

We all want to believe that if we are hurt or harassed, people nearby will help us, and most of us want to help when we see someone being harmed as well. But many of us lack the tools to assess whether it is safe to intervene, and if so, what to do. People are hungry for this information; time and again, when New Yorkers who are accustomed to automatically side-stepping canvassers register what we are offering them, they double back to take a pamphlet.

This is what gives us hope. This is the kind of non-carceral, collective work that cities like New York should fund to stop hate violence. None of us can make it through another pandemic year fueled by fear, division, and violence. To survive, we will need solidarity, care, and community. Today, as always, we keep us safe.

Leo Ferguson is the Director of Strategic Projects at Jews for Racial and Economic Justice (JFREJ).

Sophie Ellman-Golan is the Director of Strategic Communications at Jews for Racial and Economic Justice (JFREJ).