The ultimate tale of a missed opportunity, now staged by the Bolshoi on Tel Aviv’s opera stage, resonates strongly in an Israeli heart that still recalls an old hope.

The scene at the opening of the the first act, in the Bolshoi’s traveling production of Tchaikowsky’s opera Eugene Onegin. Photo by Yossi Zwekcer, Courtasy of the Israeli Opera

It does not end like an opera. No diva is sprawled on the stage, a dagger in her heart and a high D♭emerging emerging from her throat. I remember stepping out of “Eugene Onegin” stunned. Could there really be an opera that dealt with real life, rather then the melodramatic opera universe? Did Pushkin and Tchaikovsky both just send me off with the message: “life sucks, deal with it?”

It was a typically mild winter day in Eilat. The Marinski Opera House, from Saint Petersburg, visits the city yearly. Back in the 90s, its legendary director Gregeiev dreamed up a tri-national music festival. He hoped that borders would open up, following the Oslo Accords, allowing a flow of spectators into the resort city. That never materialized, but Eilat remains pleasant in winter, so the Russians keep coming.

I remember sitting in the port hangar where a concert performance of the piece was given. At first I didn’t care much. There was an old lady lamenting her lost youth, then a choir of the harvesters returning from the fields… I sank into my notepad and doodled. Then something caught my ears, the most strikingly beautiful theme I have ever heard. Tania, the village girl, was composing a letter to Eugene Onegin, a visiting city lad with whom she had fallen in love. Her letter was over the top – the kind of thing for which the “undo” function on Gmail was invented. She had just met Onegin, and was clearly making a mistake.

Still, we must be swept with her, and so Tchaikovsky composed Tania’s very emotion. He made love into music, a phrase (first appearing in this clip, taken out a production at the Met, at 4:48) that repeats in different intensities, until Tania stops singing and only the orchestra expresses her burst of infatuation (8:36). It was so gorgeous I nearly dropped the notepad.

An aloof Onegin rejects Tania’s words of love. In Pushkin’s astounding novel of sonnets, on which the opera is based, he showers her with cliches:  “I must confess, though loth to hurt you / I was not born for happiness / I am unworthy of your virtue  / I’ll give you nothing but distress.” (Translation by Babette Deutsch – the best ever). The girls sees through the pleasantries. She knows that he looks down on her from the height of his social status.

Last week, the Bolshoi Opera came from Moscow to Tel Aviv for the first time, complete with its orchestra, as a guest of the Israel opera. They are staging “Eugene Onegin” in a wonderfully minimal production, in which all the action is centered around a huge table.

Over the years I have been thinking much about the story and its lesson. Onegin’s tale is one of regret, of a missed opportunity. His rejection of Tania is followed by a violent event: he kills his good friend Lensky in a duel. In later years, traumatized by the killing, he becomes a wanderer, gambler and drinker. One evening he arrives at a Moscow ball, and finds Tania there, only to find out that she is married to an ageing nobleman. Onegin decides that his rejection of her was the wrong move, as it was then that his life began deteriorating. He arrives with flowers at her home and begs her to choose him over her husband. 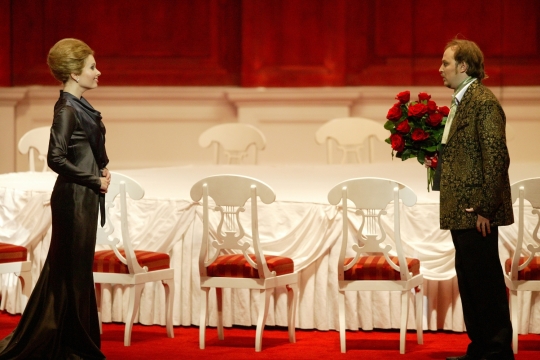 Ekaterina Shcherbachenko as Tania and Vladislav Sulimsky, in the final act of the Bolshoi’s Eugene Onegin. (photo: Yossi Zwecker, courtesy of the Israeli Opera)

In the heart of a left-leaning Israeli, this can’t help but resonate. In my mind, Tania represents the two-state solution: a compromise that could have lead to a certain degree of peace and justice.

True, in the Israeli narrative, it is the Palestinians who “turned the tables” on us at Camp David, but this is long after Israel, during Netanyahu’s first term in office, began retracting from the Oslo process. Since then we have resisted all constructive initiatives: the Geneva Initiative, the Arab Initiative, etc. Like Onegin, we placed the envelopes back on the very tables on which they were sealed, bowed elegantly, and headed away on our troika.

Do we regret it now? Some of us do. The government doesn’t. It’s engaged ever more passionately in the insanity of settlement construction and approval. Its ministers are plotting elaborate schemes for the annexation of Area C and the implementation of proper, legislated apartheid for most West Bank Palestinians. The government, like most Israeli dignitaries that attended the Onegin premiere on Monday, left this story during intermission, unwilling to watch the somber last act.

Among those dignitaries was President Shimon Peres, who addressed the audience before the curtain first rose. Peres spoke of the special relations between Israel and Russia, he praised Russian culture, and expressed his delight with poet Avraham Schlonsky’s translation of the Pushkin novel. I leaned over to Ruthie, my girlfirend, whispering that our president is well known for reading only the backs of books and making bad mistakes about details.

Just then Peres said: “Pushkin himself died in a duel, precisely like his hero, Eugene Onegin.” Oops. Onegin does not die in a duel. He kills. The entire tragedy stems from the fact that life goes on, and that the errors we made remain to haunt us. Peres, who, as a mastermind behind the Oslo Accords, played Tania’s messenger in the first act, refuses to acknowledge that the country over which he now presides has wasted its youth, and is likely headed for a bleak old age.

It does not end like an opera, not so far, at least. No diva is sprawled on the stage, a dagger in her heart and a ballistic missile with a nuclear warhead emerging from her throat. Currently Israel is still a country which both great Russian opera houses grace with their performances. I urge them to stop. Part of the reason that we keep rejecting Tania is that we lack nothing, not even great sopranos like Ekaterina Shcherbachenko.

Just as the Bolshoi brought true joy to Tel Aviv’s opera buffs, Israel’s Minister of Internal Security forced the cancellation of the Palestinian children’s theater festival, set to take place in East Jerusalem. Is it any wonder why I stepped out of this production with much darker thoughts than I did six years ago in Eilat? Life still “sucks,” but “dealing with it” becomes more and more difficult. We need to try harder and work on a happier ending.