Whether the conflict here is resolved through one, two, three or ten states, Israel will still never be homogenous. Ethnic homogeneity is a nasty and dangerous sham.

As the referendum over the future of Scotland approaches, poll numbers for the “YES” (pro-independence) have suddenly spiked. Many Brits are now panicking that Scots may really decide they are not “Better Together,” as the cheerful “NO” (or polite, “No, thanks”) campaign has tried to portray.

I am reminded of the ubiquitous OXI (NO) posters that blanketed the Greek side of Cyprus prior to the ill-fated 2004 referendum to reunite the island. Although the Annan Plan envisioned two largely separate communities under the principles of a bi-zonal, bi-communal federation, they would have been more united than before. But three-quarters of Greek Cypriots rejected the plan. Many were simply not convinced they were ready to live (more) together – even in a limited way.

Last week I attended a workshop about the two-decade-long unresolved conflict between  Armenians and Azerbaijanis over Nagorno-Karabakh. The predominant working assumption among some participants – self-defined as advocates of a peaceful solution – was that the sides should seek the greatest possible separation, as living together is bound to cause trouble.

The conviction that separation is more natural for different groups in society runs down to the level of individuals in daily life. Can police be trusted to protect the “other”? Serbs in northern Kosovo think not and the people of Ferguson, Missouri are sure they cannot. Is it okay for people to marry the “other”? Many Israelis and Palestinians say no, and some Israelis even won the right in court to protest such a wedding recently.

Lately I find myself asking, who in the world is this mythical ‘other’? After years of engagement with dialogue and co-existence programs, this summer I suddenly couldn’t tolerate the word “other” at all. Each initiative means well, but they feel so artificial – usually I don’t have many disagreements with the participants. Often, I know them all, sometimes for years. Lightning bolt: they aren’t the other!

Is the “other” my friends in Gaza, who like me, wish to live openly and freely, in peace and constructive, creative human endeavor? Is my “self,” my “in-group” my national representative Moshe Feiglin, who wishes for ethnic cleansing; my foreign minister who calls to boycott Arab shops in Israel? Is the “self” my dear Jewish friends in the Galil who disagree with many of my political views and live in a closed Jewish community, but one that is nestled between two major Arab towns, eating, drinking, celebrating, working, shopping, schooling and playing with Arab co-nationals as equals more than most Tel Avivis? It is my Arab colleague from Haifa, who teases me for being a “lefty,” or is it the Jewish Israelis who killed Mohammed Abu Khdeir? 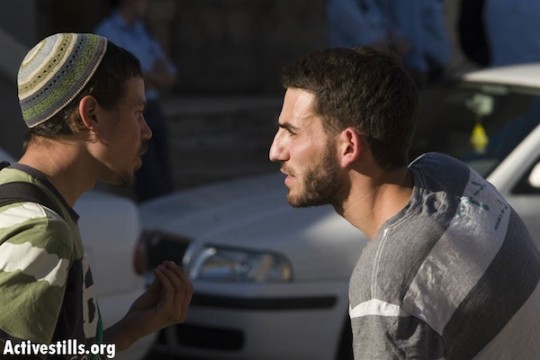 The whole self-other question clashes with the New Yorker in me. I was one of two or three Jews in my grade-school class. My best friends were tow-headed, Chinese, Hispanic, Italian and Palestinian – add a hyphenated “American” after each. We used to sit around braiding each other’s hair and having sleepover parties. No people-to-people initiative, just good old-fashioned New York City public schooling.

But this isn’t a cry for a naïve vision of a single bi-national state or American and Canadian civic identity-based Israel.

It is a reminder that whether the conflict here is resolved through one, two, three or ten states, Israel will still never be homogenous. Nor will other states, anywhere, which are fighting for exclusivity of identity. Ethnic homogeneity is a nasty and dangerous sham.

Israel has Jews, and Arabs both Christian and Muslim. There are Arab Jews and European Jews, and Christians who are neither Arabs nor Jews. There are Jews and non-Jews from Africa, there are people from the Philippines and Thailand and Scandinavia. Israel is a better place for it, if we would only treat them as the “self.”

More people are on the move than ever before, and no nation’s borders overlap with the spread of its ethnic group. Countries can continue to fight losing battles against diversity through bad policies, or admit that it is here to stay, and generate the best possible system to nurture all people equally. The same principles should guide Israel and Palestine under any future political system.

For those who say the Left is never proud of Israel, I am: When I see Haredi and Arab children playing together on the beachfront playgrounds, as I jog by in shorts while the heat wanes and the evening descends. Despite deep systemic inequalities, in that moment, I feel we are better together.

So who is really the other? In Georgia last week I told a new colleague what citizenships I held but he wanted to know my ethnicity. In Russian, he asked the interpreter: “He’s Azerbaijani, I’m Armenian – what is she?” Slightly stumped, I recalled that in the U.S., I would mark the box for “Caucasian.” As the interpreter translated my colleague roared with laughter, so I did too.

I hope we laughed because we realized that the label of the “self” – the in-group – doesn’t mean much. We had enough in common although I don’t look remotely like what he considered Caucasian: Our in-group comprises those who wish to end conflicts through diplomacy and political frameworks and respectful human interaction rather than violence.

I would like that group to go further and consider that diversity contributes to creative thinking even if it comes from sometimes painful tension. That seeing and knowing people from a range of cultures helps us to define a healthy sense of identity,  clarify our positions, weigh alternate approaches and question our presuppositions, cultivate critical thinking.

It would be hubris for me to tell Scots that they’re wrong about independence economically or politically. But the broader idea that separation is the ultimate human experience can’t be right. The only “other” is those who don’t see humanity in their neighbors. We don’t need to dehumanize them; they do that very well for themselves. But a real self-other dialogue means reaching out to them, not only to our “selves.”