Despite polling better in than mid-sized Jewish parties, the Israeli media is simply paying less attention to the Arab Joint List. 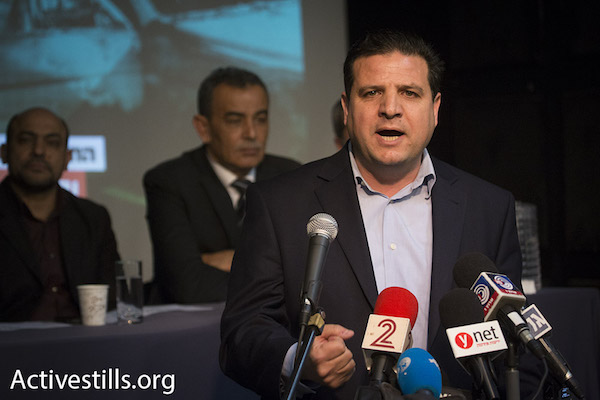 On January 15 former minister and Kulanu party head Moshe Kahlon announced the makeup of his list of candidates. Israel’s Channel 2 budgeted a minute and a half to its report, including a live report from the tent in which Kahlon held his event. In a poll reported in the very same newscast, Kahlon was predicted to receive eight Knesset seats. The same night, Channel 10 made Kahlon’s event its headline story. A survey presented on that newscast gave Kahlon 10 seats. Channel 10’s live coverage of Kahlon’s event started 18 minutes into the newscast, lasted around a minute and included the names and faces of all of the party’s candidates. Channel 1’s broadcast also went back and forth, live, to Kahlon’s speech for around two consecutive minutes.

On Janary 26, Yair Lapid announced the list of his party’s candidates. Channel 2 carried around two minutes of the event live, including selections of Lapid’s speech, and visually presented the candidates. A poll published on Channel 2’s newscast that night predicted that Lapid would win nine seats. Channel 10’s broadcast that night was fairly similar: a live broadcast from the event (starting 16 minutes into the show), presented the candidates’ names and faces, and clips of Lapid’s speech. Channel 1 also had live coverage of the event, including the presentation of the party’s candidates’ names and part of Lapid’s speech. The segment lasted around a minute and a half.

On January 23, Arab parties Ra’am-Ta’al, Balad and Hadash announced that they would run together as part of the Joint List and presented their candidates at an event in Nazareth. Aside from the symbolic unification event, the parties joining together was a newsworthy event in and of itself and is innovative as far as Israeli politics are concerned. A ‘Maariv’ poll published the same day gave the Joint List 11 seats.

Read also: At Joint list launch, a glimmer of hope against incitement, racism

Channel 2’s flagship Friday night newscast devoted all of 30 seconds to the Joint List, consisting of the anchor in the studio with photos of the event in the background. On Channel 10’s Friday night show, the Joint List event was only mentioned as part of a larger general elections story by Nadav Perry. Fewer than 30 seconds were budgeted, but at least some of them were a clip of Joint List head Ayman Odeh. Channel 1 managed to find around a minute and a half for a report about that event by Boaz Shapira, which included interviews with some of the Joint List’s candidates. To the two commercial channels’ credit, it should be noted that the Joint List event was conducted in Arabic.

Earlier this month, the Joint List launched its campaign for the Jewish public in an event conducted in Hebrew, in central Tel Aviv. A poll published on Channel 1 the same day predicted that the Joint List would become the third-largest party in the Knesset, with 12 seats. Channel 2’s broadcast that night, which is 50 minutes long, didn’t budget even one second to the event. On Channel 1’s broadcast, fewer than 30 seconds were given to a report by Boaz Shapira, which was actually about the impact of left-leaning American organizations in increasing voter participation among Arab citizens of Israel.

More on Israeli coverage of Arab parties:
Israeli media coverage: An election with no Arabs?
‘Apartheid polls’: When some opinions just matter less