Orthodox rabbis long for the day when they’ll wipe out Amalekites, and two more notes

Rabbis for Death Camps: One of the popular genres of media generally unfamiliar to the Israeli secular public is that of synagogue pamphlets. There are quite a few of them, and they are distributed on Fridays to thousands of synagogue. Almost every sect has its own pamphlet, mostly of rather inferior quality.

One of the most successful ones is “Ma’yanei Ha’yeshua’” (“Fonts of Salvation”), which is well-made and recently expanded to 16 pages, instead of the usual four. It is published by the Ma’yanei Ha’yeshua’ movement, among whose founders we find the recently-expired Mordechai Aviner; his son, Shmuel Eliyahu, is a frequent contributor, as is Shlomo Aviner, one of the most important settler rabbis. In short, it is one of the pillars of the media of the “Emunnit movement”, i.e. those national-Orthodox whose goal is a religious takeover of Israel.

The 117th pamphlet of Ma’yanei Ha’yeshua’, published some three weeks ago (careful, Hebrew PDF) contains an unsigned editorial, protesting against those rabbis who attacked the “rabbis’ letter”. It bemoans the possibility that “the Torah would be put in a private, religious, small corner, and will not direct our public, general, national life […] Yes, there also such [rabbis], clerkish, who don’t want to cause trouble, who explain “this is not precisely the Halachic law” […] in short, those for whom political correctness is their daily bread […] we wonder whether they will leave the concentration of Amalekites in death camps to others, or may decide that the wiping out of Amalek is no longer relevant. Time will tell.” My emphasis. 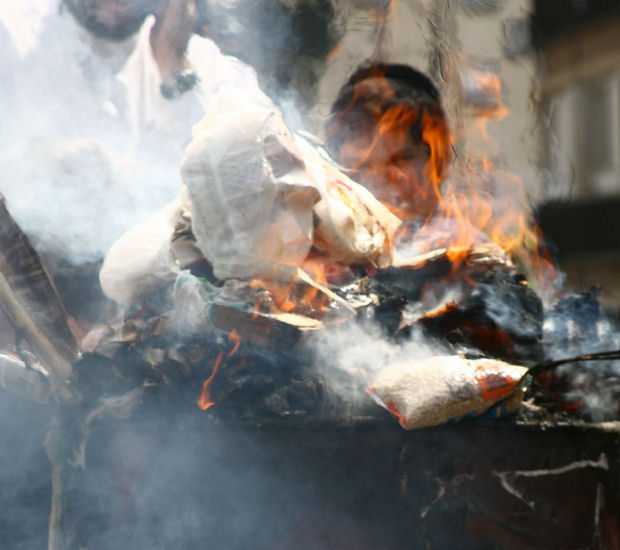 Where they burn bread, there they shall burn people? (Yossi Gurvitz)
In other words, a central religious media outlet announces, to all it may concern, that in time we will have “death camps for Amalekites”. The Amalekites were a people who bothered the Sons of Israel as they left Egypt, and God ordered their destruction. King Saul came close, but his clemency prevented him from finishing the job, for which he was punished by God. Jewish law contains a mitzvh to wipe out Amalek, which is supposed to take place sometime at the end of days. It is unclear how one recognizes Amalekites – but many believers, especially those who make Kaballah a mainstay of their beliefs, think even Jews may be Amalekites. It is a good place to note that Kaballah is the most virulent of Jewish literature in its loathing of non-Jews. So, the pamphlet most identified with the instigator of the “rabbis letter”, Shmuel Eliahu, insists on its right to create death camps, and that people who will not participate in this Final Solution are cowardly and unworthy of the title of rabbis.

Of course, this is direct Nazi influence. Without Himmler, Heidrich and the rest, one doubts the rabbis would come up with the idea of a death camp. They would have to make do with the rather disorganized ethnic cleansing carried out by Saul – though, of course, without making his error of showing pity. It turns out that sixty and more years after “never again”, there are rabbis – publicly funded rabbis, at that – who think it’s time for another round, only this time good Jews should do the killing. And like the murderers in black and silver, they openly claim that unlike some wusses, they would have no problem bashing the skull of a baby at a rock, and they will be tough enough to “watch a hundred, or five hundred, or a thousand bodies side by side”.

It’s not particularly surprising; Orthodox Judaism always contained proto-Nazi elements. It’s just that they’re no longer hiding. They think their time has come. And the frightening thing is, they may be right.

Hei Liberman: One always suspected that the assault of the Foreign Czar on the human rights NGOs, which was followed this week with an assault on Haaret, is not derived only of the Stalinism he grew on. Liberman, after all, is one of the most accomplished performers of the art of tight-rope walking between the legal and criminal. We’re talking about someone who managed to plant a mole in the police’s investigative unit, who brought about the firing of the chief of the police’s investigative arm, and used his power to install an ambassador who would open sealed police envelopes for him (Hebrew), who magically made millions show up in his daughter’s bank account; a person who 15 years ago learned to hold discussions in underground parking lots, to avoid wiretapping; the good friend of the oligarchs Gregory Lerner, Michael Chernoy and Martin Schlaff.

Yesterday Liberman blurted out what is the incentive behind his attacks: in an interview with Shimon Schiffer, in Yediot’s Saturday Supplement, Liberman claimed that his vitriolic campaign goes against his interests, because “the left has connections with the prosecution”, and that he is aware that “he may have to pay a price” for his words, but he’s unafraid.

Yisrael Hayom published yesterday a report saying that the decision whether Liberman is to be indicted – the slowness of the decision taking process in his case is indeed a scandal – will be taken in two weeks. Skepticism is warranted; we’ve heard about those deadlines time and time again. But if a decision will indeed be made, one shouldn’t be surprised if Liberman – who appointed the Minister of Justice and the Minister of Interior Security – would be aware of it in advance. If so, his interview with Schiffer will be the opening shot of the new elections campaign. Liberman will take us back to the 1999 campaign, in which Aryeh Der’i, convicted of bribery, inflamed the country claiming his conviction was a setup. Liberman will say that, as he saw in advance, he was hunted by the left. He will be disqualified from serving as a minister, but will continue to serve as his party’s puppet=master. In short, we ain’t seen nothing yet.

And the Lord opened the Mouth of the Ass: Sarah Palin found itself stuck in a mess of her own doing after the Tucson shooting. So, after a few days of shock and Headless Chicken Drill – i.e., running around in circles – in Camp Palin, she came out with a petulant speech.

And immediately stepped on a landmine. Being a complete ignoramus, she described the media claims against her as “blood libel”. OOPS! Nobody told her this is a registered sign of self-victimized Jews! She wandered onto the wrong turf. Hence, Jewish leaders opened fire. Even Abe Foxman, always merciful when in comes to conservatives and Republicans, had no choice but to slap her lightly.

So, Sara, here are the new ground rules: Sitting quietly during a sermon in which a pastor describes suicide bombing against Israelis as God’s wrath for rejecting Christianity – fine and dandy; Trespassing on Jewish monopoly on victimhood, not so much. And if you can’t understand this basic rule, you have no business being in politics.