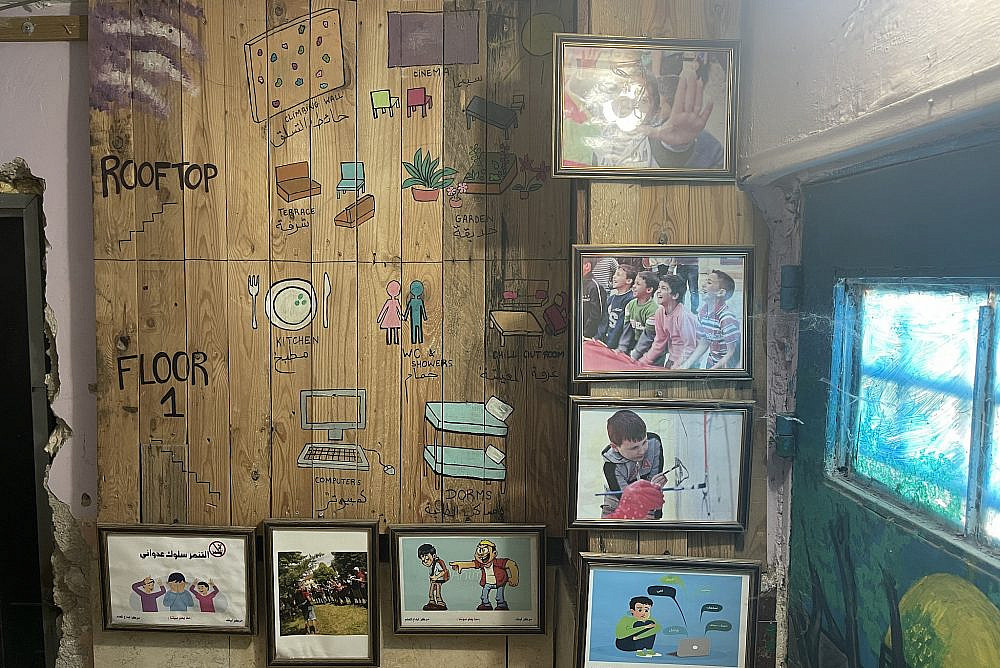 A short walk away from the narrow alleys of Bethlehem’s Dheisheh refugee camp, overlooking the Jerusalem-Hebron road, stands a small, unconventional rooftop cafe called Laylak. Old plastic and metal seats have been renovated into makeshift swings, and wooden pallets have been pushed together to form a picnic table next to a large trampoline.

The cafe’s modest setup is the improvised project of a group of 14 Palestinian children from Dheisheh, all between the ages of 12 and 16, who wanted somewhere that could be a recreational hub aimed at encouraging their peers to steer away from the troubling habits that have been soaring among children in the refugee camp, such as smoking, aggressive behaviors, or playing violent video games. At the cafe, the children find a space to channel the anxieties of their daily life into positive activities and social interactions.

“When I walk out of the camp to the main street, I don’t think twice,” said 14-year-old Sedra, one of the project’s participants. “My feet take me to the right, towards Laylak, because this is where I find myself most useful to my community.”

Laylak is one of several social clubs across the occupied West Bank catered to young “child rights defenders” who comprise the Palestinian Children Council, a nationwide initiative set up by Defense for Children – Palestine (DCI-P), which also runs specialized human rights workshops in the cafes.

DCI-P is one of seven Palestinian human rights NGOs whose offices were shuttered by Israeli forces in August after Defense Minister Benny Gantz designated them as “terrorist organizations,” a decision that was made with no substantive evidence to back up the claims. DCI-P is part of the wider organization Defense for Children International, which is based in Geneva, and has been working in Palestine since 1991 to monitoring rights abuses committed by both Israeli and Palestinian authorities. 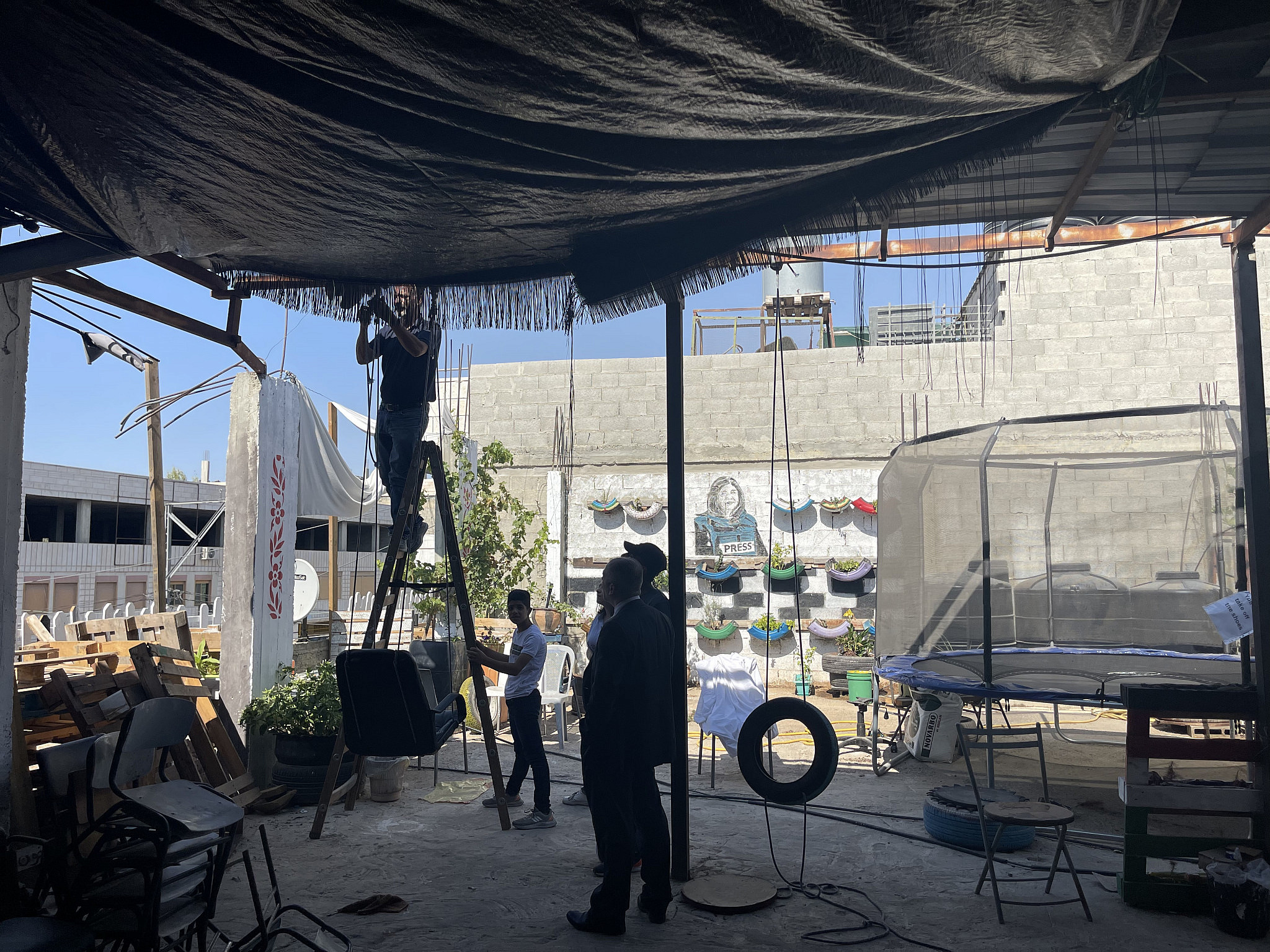 Mohammad, another 14-year-old resident of Dheisheh, traces his own frustration and anxieties to the realities of living under Israel’s military regime, including repeated raids and arrests in the camp and the general disregard for the residents’ lives. At the same time, Mohammad acknowledges that the community feels swamped and helpless.

“The occupation is responsible for so many issues children are facing today, and so is the local community’s negligence,” he said.

Mohammad’s own life has been affected by direct encounters with the Israeli military. His older brother was imprisoned at the age of 17 for seven years, and on three occasions in the past few years, Israeli soldiers used Mohammad as a human shield during raids into the camp to avoid being stoned by camp residents. These experiences were the gateway for his desire to understand what the Israeli military does to children it arrests, and what could be done to stop them.

“My personal goal now is to document cases of arrests of children and their use as human shields by Israeli forces in the camp, which I will share with DCI-P lawyers to help them,” he added. “I heard from many of my peers [who were arrested by Israeli soldiers] about how they were forced to confess to things they never committed.”

Ayham, 13, was the most recent addition to the Laylak team this summer. He is in it for the fun of it, he admits, but he also wants to help children his age use their time more wisely than spending long hours in front of the computer screen.

“I never knew that we are capable of defending our rights under the ongoing Israeli army raids and widespread arrests in the camp,” said Ayham. “But I learned that we can help lawyers and people who shed light on our plight.” 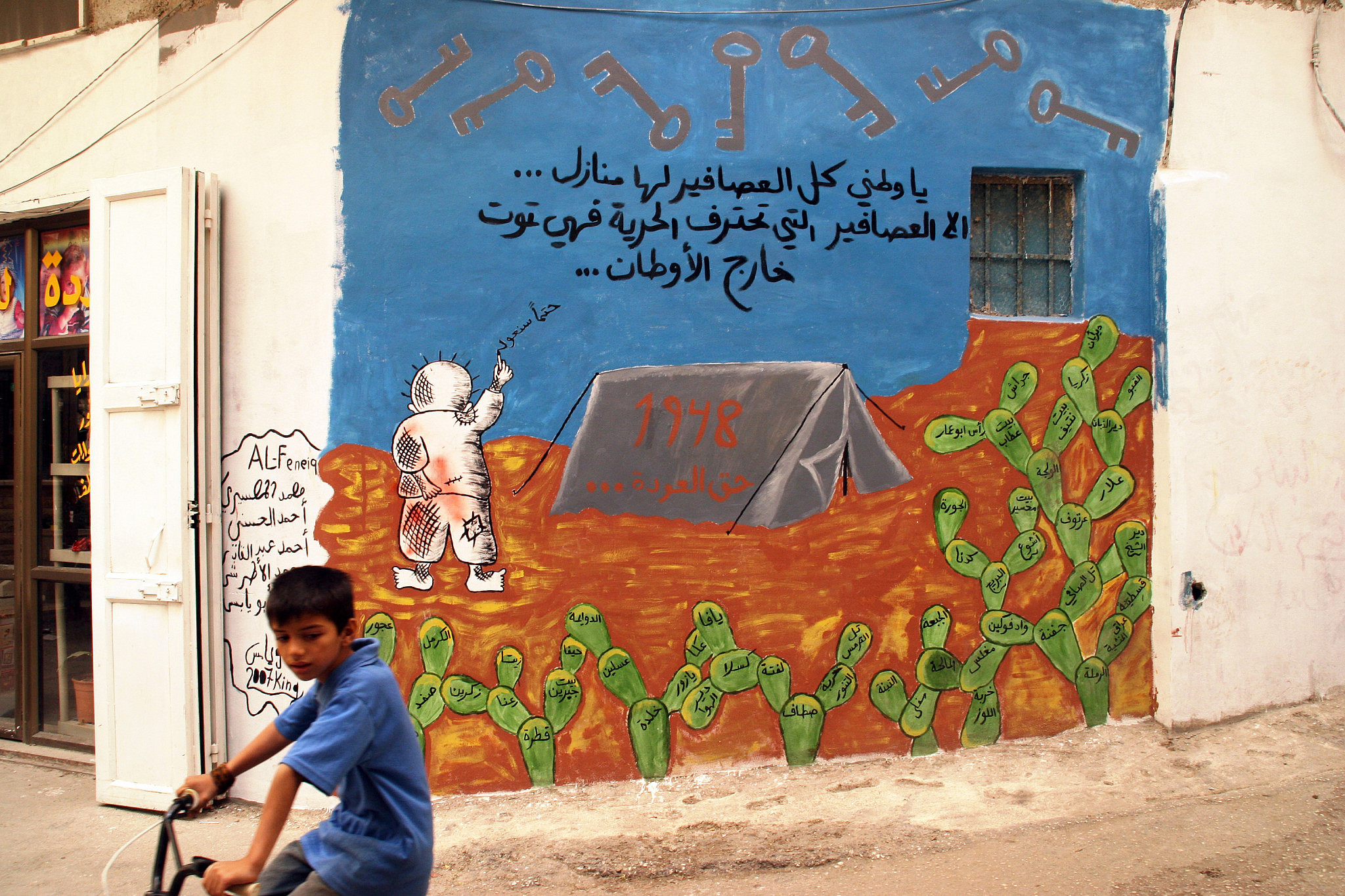 A Palestinian child passes by with his bicycle in front of a mural symbolizing the refugees plight, in Dheisheh refugee camp, in the West Bank city of Bethlehem, May 10, 2007. (Anne Paq/Activestills)

Meanwhile, the Laylak team gathers in the cafe as a local volunteer group of peers aims to “create a friendly social environment” for the children of the camp to address their pressing issues. They paint the cafe’s walls, drawing pictures of Palestinian figures like journalist Shireen Abu Akleh and cartoonist Naji al-Ali, illustrations of role models they aspire to be like.

Sedra explains that the pressure imposed on Palestinian society at large leads to a collective sense of uncertainty and hopelessness. “We don’t have spaces that allow us to play and share what we go through, or to learn new skills,” she said, before telling one story after another about how important it was for her to consolidate her friendships by attempting to help her female peers through various social challenges.

“One of my friends went through a rough patch as she was bullied in school, and felt that she wasn’t heard by her family,” Sedra recounted. “So I listened to her and reported her case to the school counselor, and helped her regain her self-confidence. I wouldn’t have known to do that if it wasn’t for a film I watched during one of DCI-P’s workshops about bullying and trust-building among children.”

‘The right hand of the occupation’

A core feature of DCI-P’s work has been to enhance the legal and psychosocial environment for Palestinian children throughout the occupied territories, hoping to alleviate the impact of daily and structural violence. In addition to workshops and documentation, the organization has been at the forefront of demanding change to the legal architecture that deals with children.

“At the early stage of the establishment of the Palestinian Authority (PA), it was a joke to speak of specialized juvenile justice courts, but now it is a widely supported reality,” said DCI-P’s executive director Khaled Quzmar. “I’m proud to say that we now have a law that is named the ‘Youth Protection Law,’ and it is one of the best in the Arab region.” 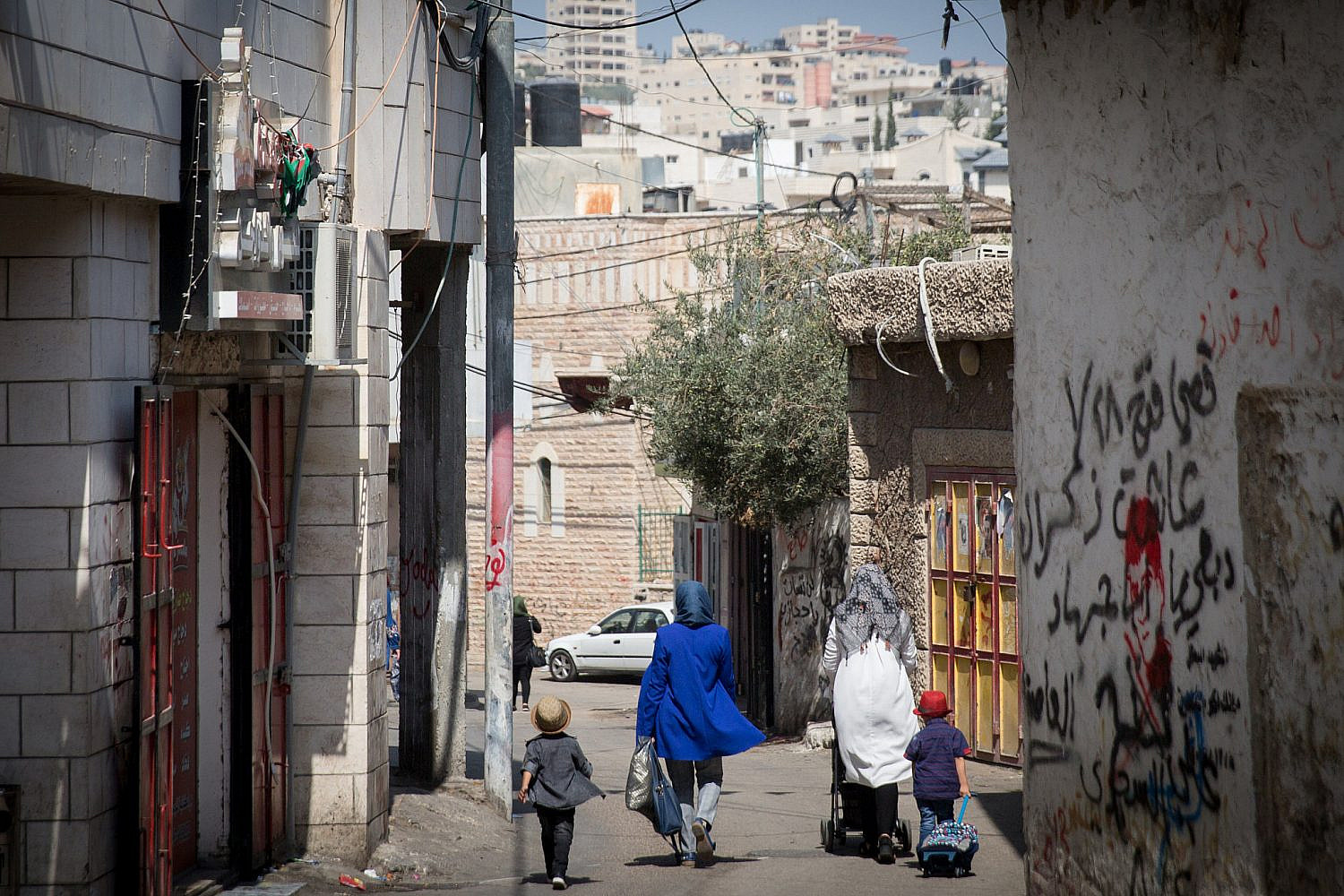 Palestinian women walk through the alleyways of Dheisheh Refugee Camp, in the West Bank city of Bethlehem, August 30, 2018. (Miriam Alster/Flas90)

An attorney for DCI-P who represents children within the PA system, and who requested anonymity out of concern of the Israeli authorities, told +972 that the fundamental vision of child justice units has transformed from viewing children “as offenders in need of punishment into victims in need of help.” DCI-P spearheaded a long process — including with the police, judiciary, and Social Affairs Ministry — to change Palestinian law regarding children, prioritizing their interests and preventing juvenile offenders from returning to violence or breaches of the law.

Quzmar believes there is still much more to be done with the PA in this arena. The bigger problem, however, lies within the Israeli system, “where there is no justice for children, just maneuvers to try minimizing the child’s exposure to injustice.”

Since the start of 2022, 40 Palestinian children have been killed, according to DCI-P, including 22 shot dead by Israeli forces and settlers in the West Bank, a clear rise compared to recent years. There are currently about 180 children in Israeli jails, with hundreds more detained for varying periods of time. The Israeli military courts, which preside over juvenile cases as well as adults, has consistently been reported to have a conviction rate of 95 to 99 percent.

“The military courts system is the right hand of the Israeli occupation’s tools of domination,” Quzmar continued.  “From one side, it is made to punish every Palestinian, and from the other, to legitimize the crimes against them.”

With that, international advocacy has become an essential component of DCI-P’s work, Quzmar explained, with the hope that pressure from the outside could help bring about accountability. And on the ground, “through the Palestinian Children Council, we try to show the children hope for their future, to support them through their most difficult times into adolescence, and to save their lives,” he added. 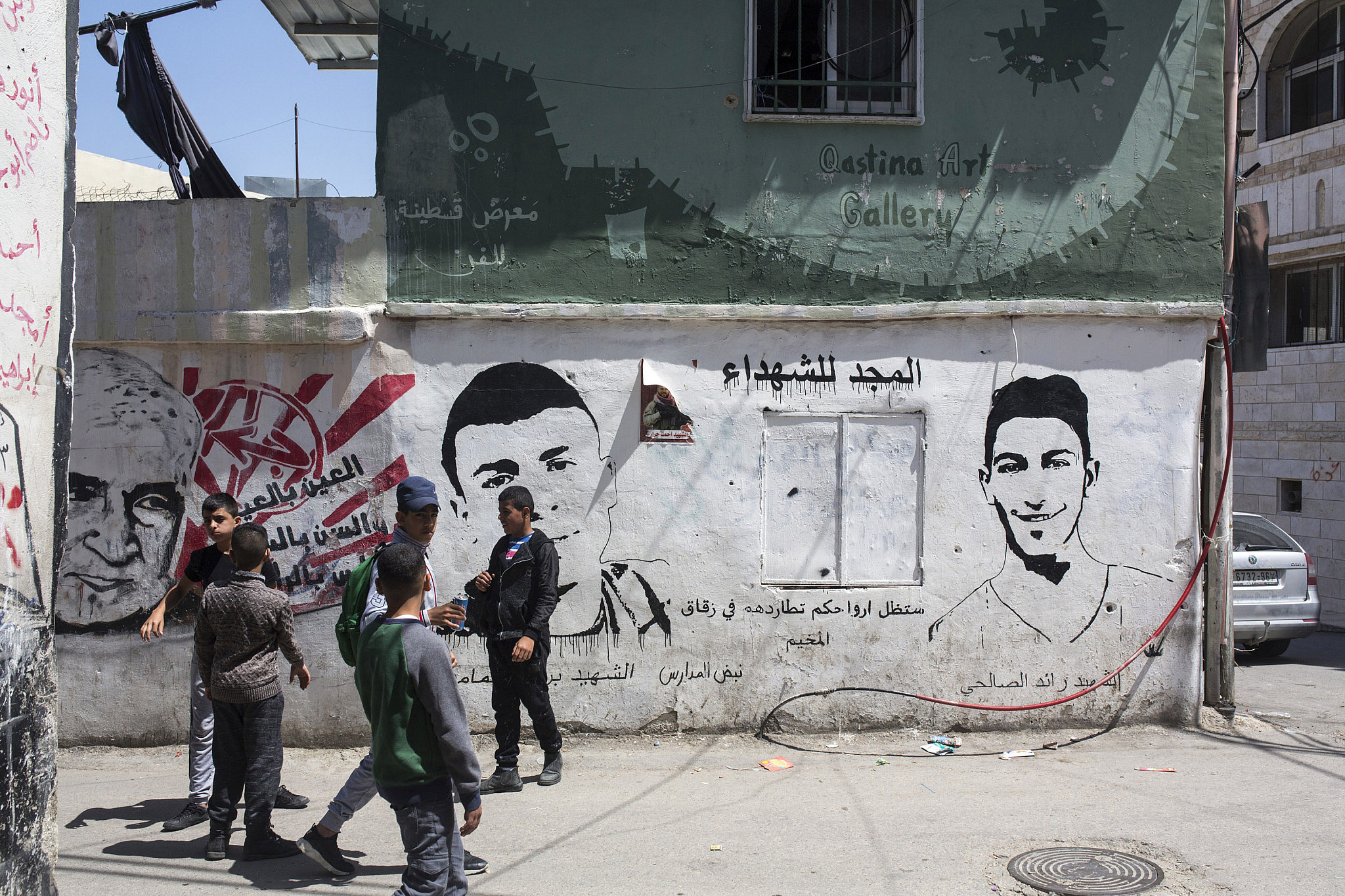 The council works to empower children not just through trainings, but also by facilitating meetings for them with representatives of foreign states and international organizations, including ministers, diplomats, and heads of UN agencies.

As part of DCI-P’s efforts, social workers focus on helping at-risk children with their education and personal wellbeing, through a designated psycho-drama program and different activities to keep them engaged.

“We try to create a safe network for child victims, as those circles become effective social and psychological support that have brought out new opportunities for dozens of children,” said a psychological specialist who collaborates with the organization and requested anonymity out of concern of safety from the Israel authorities. “But this is now at risk of fading away if DCI-P is forced to shut down.”

Fatima AbdulKarim is a journalist based in Ramallah. Twitter @FatiabdulFatima