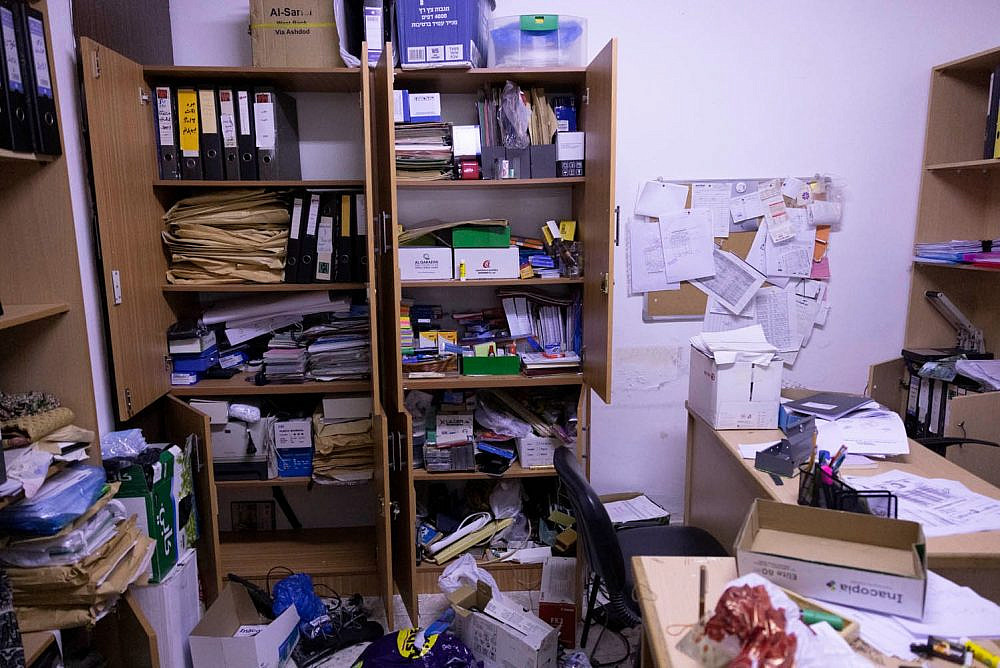 The Israeli army raided this morning the Ramallah offices of seven prominent Palestinian NGOs that have been designated as “terror organizations” by the Defense Ministry. In a concerted operation, soldiers simultaneously broke into the groups’ headquarters across the occupied West Bank city just before dawn, seized files and equipment from some of them, and welded the doors shut. At the entrance to each office, the army left copies of military orders declaring that the organizations were illegal.

Six of the organizations — Al-Haq, Addameer, Bisan Center, Defense for Children International-Palestine (DCI-P), the Union of Agricultural Works Committees (UAWC), and the Union of Palestinian Women’s Committees (UPWC) — were outlawed by Defense Minister Benny Gantz in October 2021, while the seventh, the Health Work Committees, was outlawed the year before.

In Al-Haq’s office, soldiers left items and equipment sprawled on the floor and sealed the main door with a metal plate. In the office of UPWC, the contents of the cupboards and drawers were thrown onto the floor, and one staff member said that the army had taken the organization’s computers, portable drives, and servers. 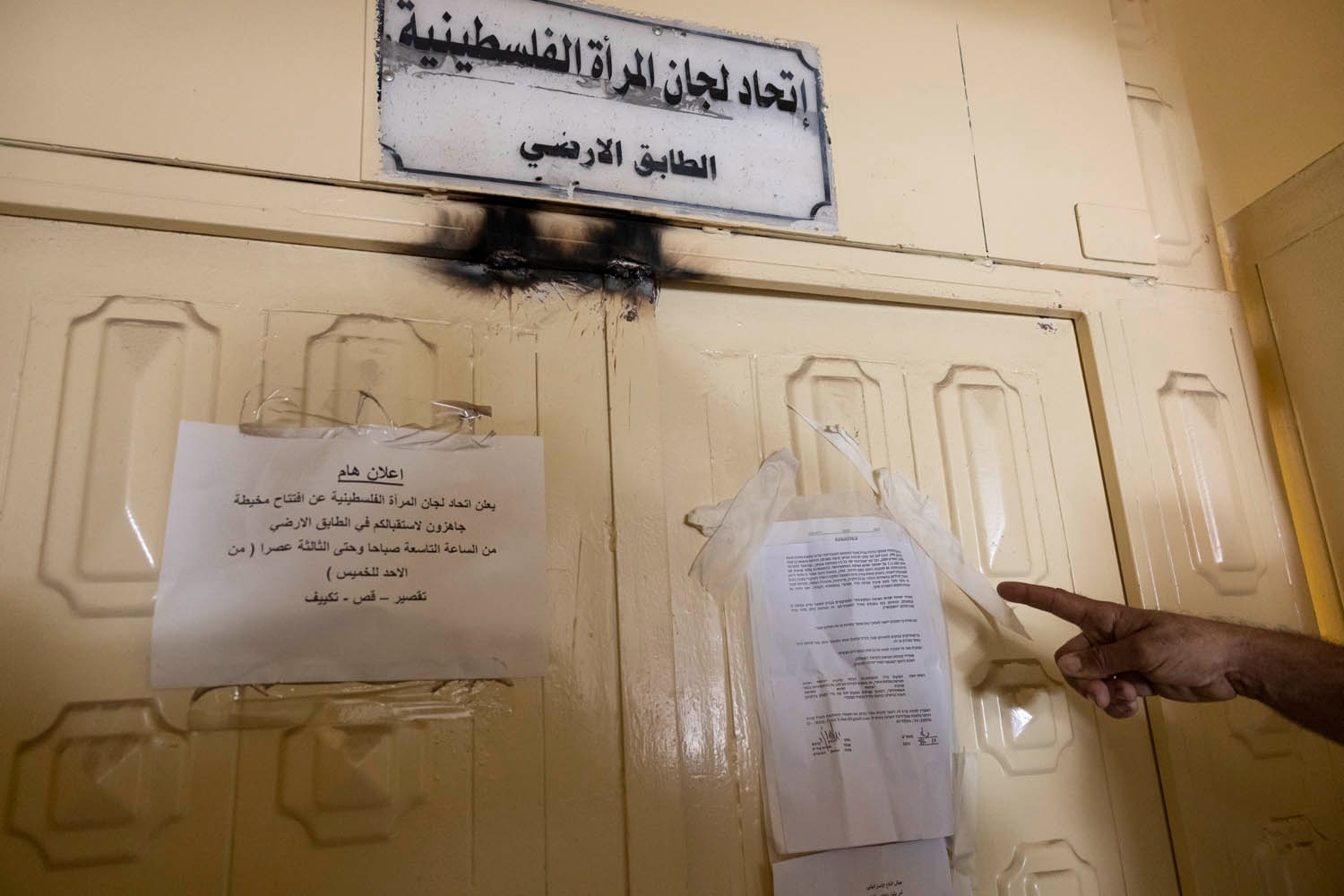 The raids were launched just a few hours after the Defense Ministry announced that it had rejected appeals filed earlier this year by the organizations to the Israeli military commander in the West Bank seeking to cancel the designations; the appeals argued that the authorities did not provide the targeted groups with evidence for its decision nor allowed the organizations fair due process to object to the order before it was made. The Defense Ministry also announced that with regard to three of the organizations (Bisan Center, Addameer, and UPWC), the designations have now been fixed into law.

“We will not respect the orders,” said Addameer’s Executive Director Sahar Francis, denouncing the raids as a violation of international law. According to her, the organizations had received notice of the Defense Ministry’s rejection of the appeals at 11 p.m. the night before, and “it was clear that they had already planned the raid [for] this morning.”

“Yesterday, we heard through the media that the military commander rejected our appeal, even though the Defense Ministry is still reviewing our appeal [in a separate proceeding],” Khaled Quzmar, DCI-P’s director, told +972. “We’re still waiting to see the evidence against us. So we were surprised to find out this morning that the office was raided and the computers and files were confiscated again.” DCI-P’s office had previously been raided by the army in August 2021. 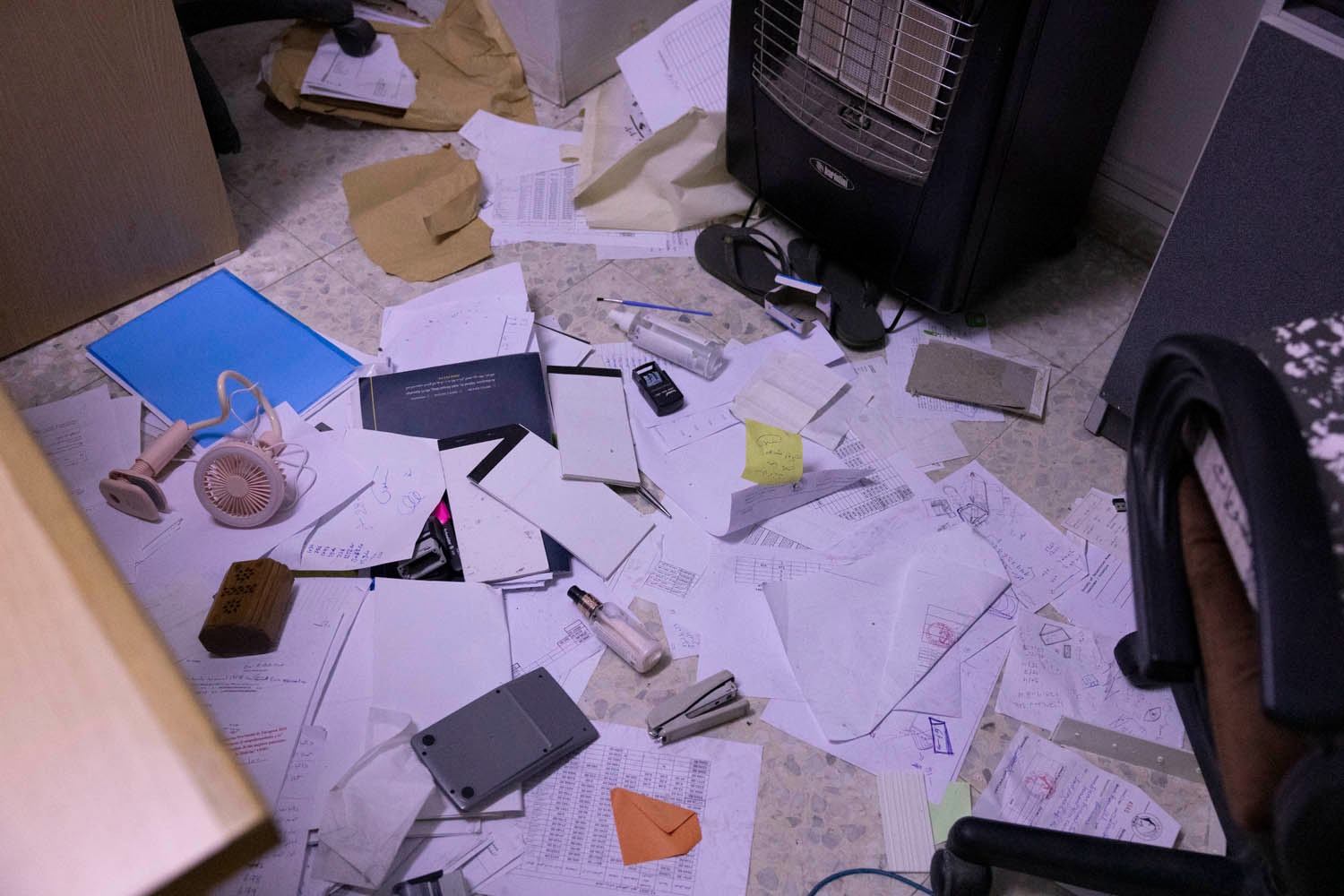 Ubai Al-Aboudi, Bisan’s executive director, told +972: “We saw on the [security] cameras: they broke into the office, a bunch of thieves who call themselves the Israeli army. They came in the middle of the night, they stole our papers, our laptops, even our printers and video projectors, and sealed our doors shut… as long as they are not held accountable, they will not stop their apartheid practices and violations against human rights defenders and the Palestinian people in general.”

Eyes on The Hague

Since issuing its sweeping “terrorist” designations last year, the Israeli army has largely refrained from carrying out major operations on the ground against the targeted NGOs, except for a few cases in which senior members of the organizations were prevented from traveling abroad. Now, it seems the Defense Ministry is digging in its heels and intensifying its actions, in spite of growing international opposition.

The heads of the Palestinian organizations described today’s raids not only as an attempt to obstruct and silence their work, but also to send a “message to European countries.” Last month, nine European governments — including Germany, France, Italy, and the Netherlands — issued a statement rejecting Israel’s accusations against the NGOs, concluding that “no substantial information was received from Israel that would justify reviewing our policy,” and added that they would continue to provide financial support to the organizations.

“The message from the occupation authorities is that they do not care about the [foreign] donor countries, and it does not matter which of the organizations appealed or not — they raided all of them,” said Addameer’s Francis. 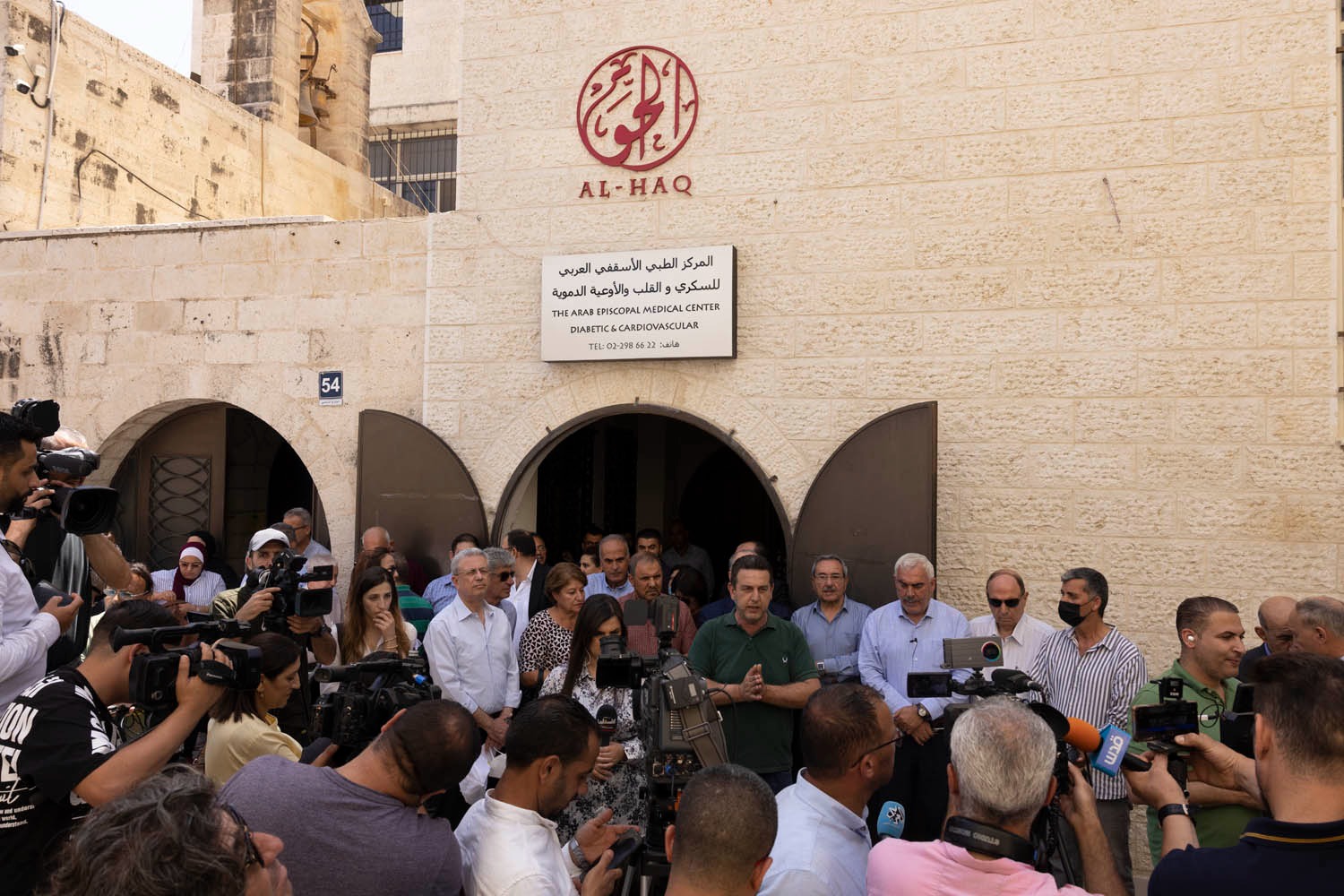 Heads of Palestinian NGOs speak to the media outside of Al-Haq’s offices after the Israeli army raided their offices, Ramallah, West Bank, August 18, 2022. (Oren Ziv)

The Haifa-based legal center Adalah — which represents Addameer, Bisan, and the Women’s Committees — stated that the latest attacks are being “led by a Defense Minister, Benny Gantz, suspected of committing war crimes, in an attempt to terrorize those who will testify against him and his actions.” Adalah added: “This attack on Palestinian civil society is an attack on the entire Palestinian people and their right to self-determination. Standing aside or staying silent constitutes active cooperation with the persecution and oppression of human rights defenders.”

Attorney Michael Sfard, who represents Al-Haq, echoed this sentiment, telling +972: “This is a despicable act by the Defense Minister, who in order to thwart the investigation in The Hague (in which he himself could be a suspect) behaves like the last of the dictators, and with the power of the gun acts against prominent human rights defenders. Let’s recall that all this is happening after the government failed in its attempts to convince the European countries, which one by one determined that there is nothing behind the accusations against the organizations. International intervention is required to protect Palestinian human rights defenders from Israeli dictatorship.”

Sfard is one of several lawyers representing the NGOs who last month received a letter from the Defense Ministry, which hinted that receiving legal fees for the representation could be considered a security offense under Israel’s anti-terror laws, which would be subject to severe penalties. The lawyers were forced to suspend their representation until further notice. 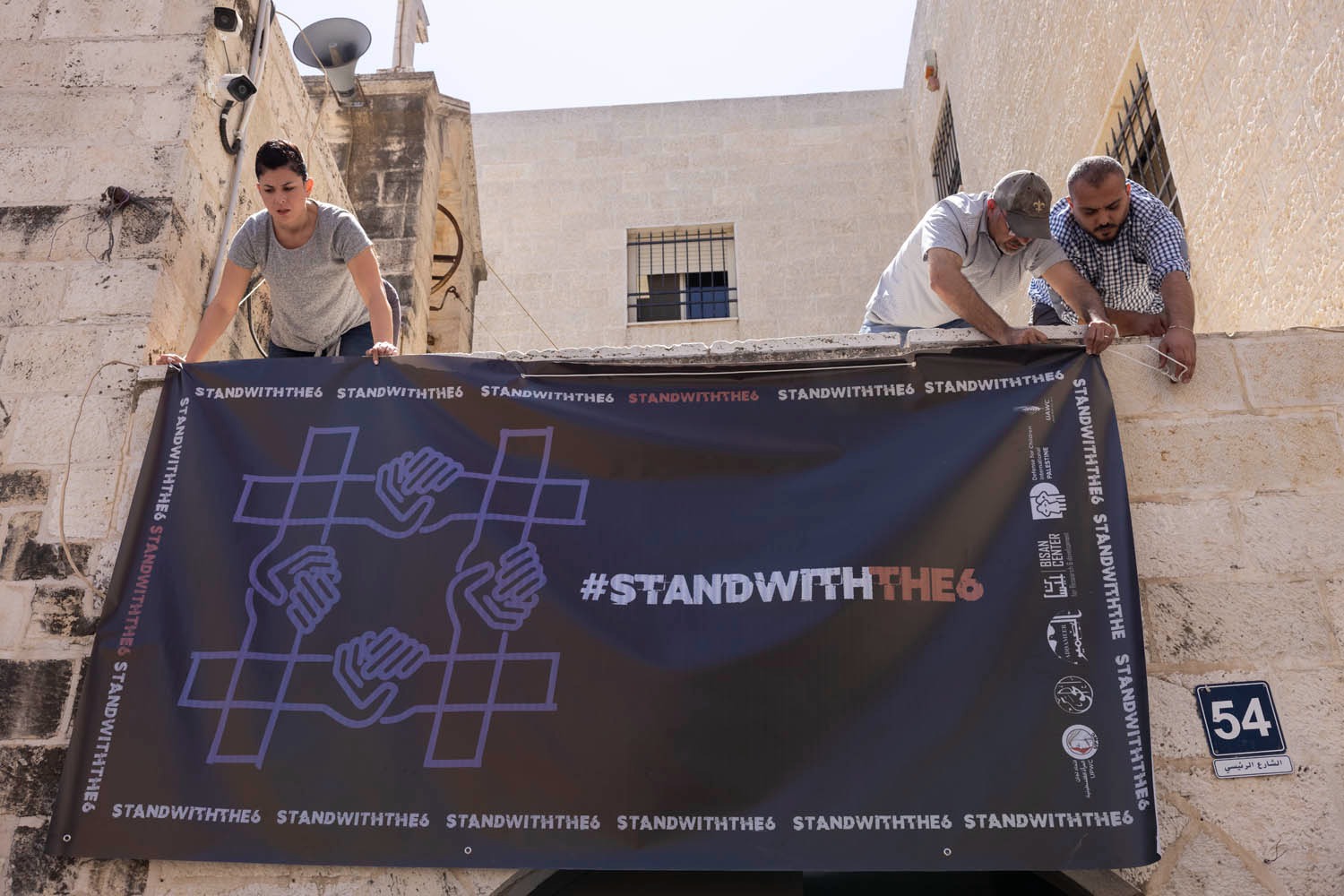 A sign in support of the targeted Palestinian NGOs is put up outside of Al-Haq’s building after the Israeli army raided their offices, Ramallah, West Bank, August 18, 2022. (Oren Ziv)

Israel claims that the targeted organizations are operating as “arms” of the Popular Front for the Liberation of Palestine (PFLP), a political party with an armed wing that is designated as a terrorist group by Israel and several other countries. However, the Israeli government has not disclosed any credible proof to back up its accusations. The organizations have also demanded to receive the materials behind the decision, but have been refused.

+972 and Local Call have published two investigations over the past year which revealed that Israel has not been able to present any serious evidence to substantiate its claims against the organization. In the first investigation, we revealed a 74-page dossier compiled by the Shin Bet that was sent to donor countries in May 2021, about six months before the announcement; our investigation revealed that the accusations were not backed up by actual evidence. A follow-up investigation showed that a second dossier still did not contain any real proof.

For its part, the Israeli Defense Ministry reiterated its accusations against the NGOs in a statement last night, claiming they “operate under the guise of carrying out humanitarian activities” to advance the goals of the PFLP, including by recruiting activists and raising funds through “various methods of forgery and deception.” It is worth noting that various donor countries and organizations have conducted extensive audits of the organizations in question, and have found no basis for the charges. 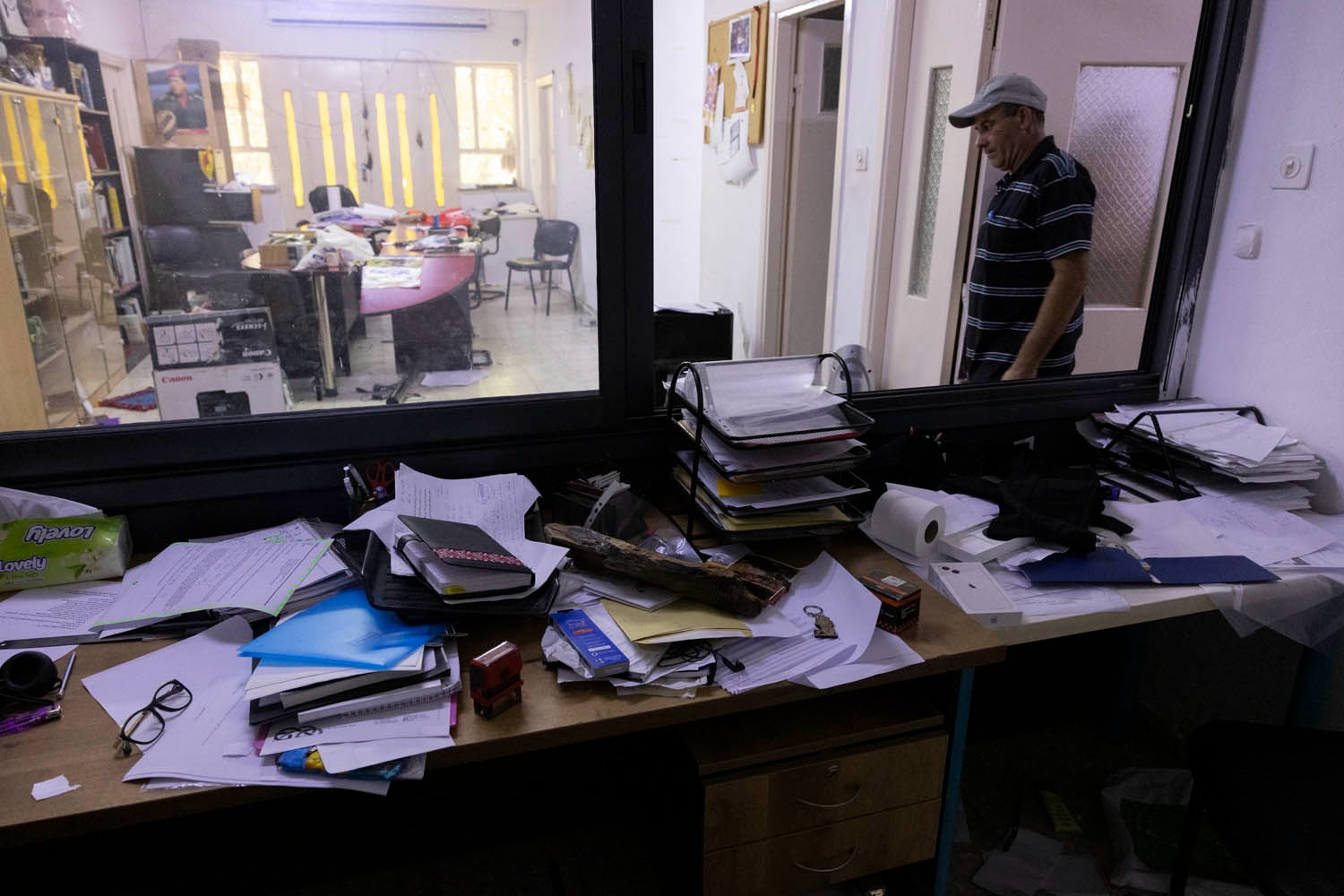 An Israeli army spokesperson also stated: “IDF and Border Police officers, led by the Binyamin Regional Brigade, acted tonight to close institutions that work for the terrorist organization PFLP and its branches. The forces closed seven institutions, and confiscated property belonging to the organization and its branches. During the activity, stones and Molotov cocktails were thrown at the forces, who responded with measures to disperse the protests.” It is unclear where or when the latter events described occurred.

‘Israel has no justice system for Palestinians’

Hours after the raid, the heads of the organizations, political activists, and journalists arrived at Al-Haq’s office for a press briefing. Signs supporting the organizations were hung outside the office, and members of the public had already re-opened the sealed entrance door in a show of solidarity.

Speaking to the media, Al-Haq director Shawan Jabarin said: “This is not a job for us — it is our beliefs. We will continue our work defending justice and international law.”

Jabarin continued: “Israel has no justice system for Palestinians — it is an illusion. They are even threatening Israeli lawyers for representing us, trying to criminalize their legal work. This is why our call is for people to open their eyes and to address the reality on the ground: this is an apartheid, colonial state, and this is the nature of the illegal occupation here.” 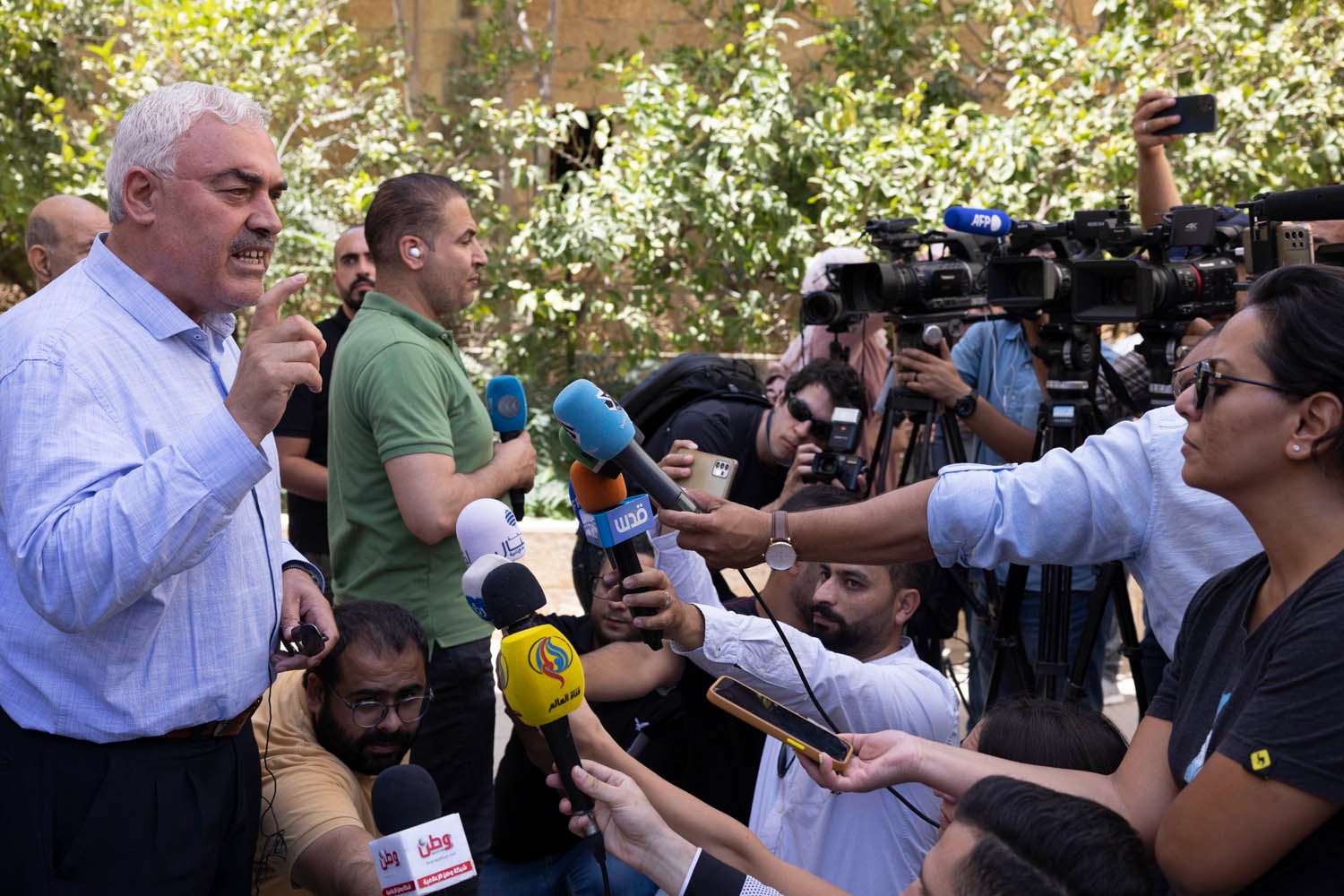 Regarding the European donor countries, he said: “We have full confidence in them. They have to stand behind their values, because this is the moment of truth. It is time to impose sanctions on Israel. It is time to cut off trade relations, even with the [West Bank] settlements. So we hope to see something from them today.”

Palestinian Prime Minister Mohammad Shtayyeh arrived at the scene and expressed support for the organizations, saying that they operate within the framework of Palestinian Authority law. “As long as these organizations work within Palestinian law, we have to respect and protect them.

“We call upon the international community to stand in solidarity with us in rejecting and condemning the Israeli actions that we’ve seen today,” he continued. “These organizations have worked hard with us to take Israel to the International Criminal Court for all that it has done against our people in the West Bank, Gaza, and Jerusalem. The [upcoming] Israeli election campaign should not be paid in blood — as we have seen in Gaza, as we have seen in Nablus, and today as we have seen in Ramallah.” 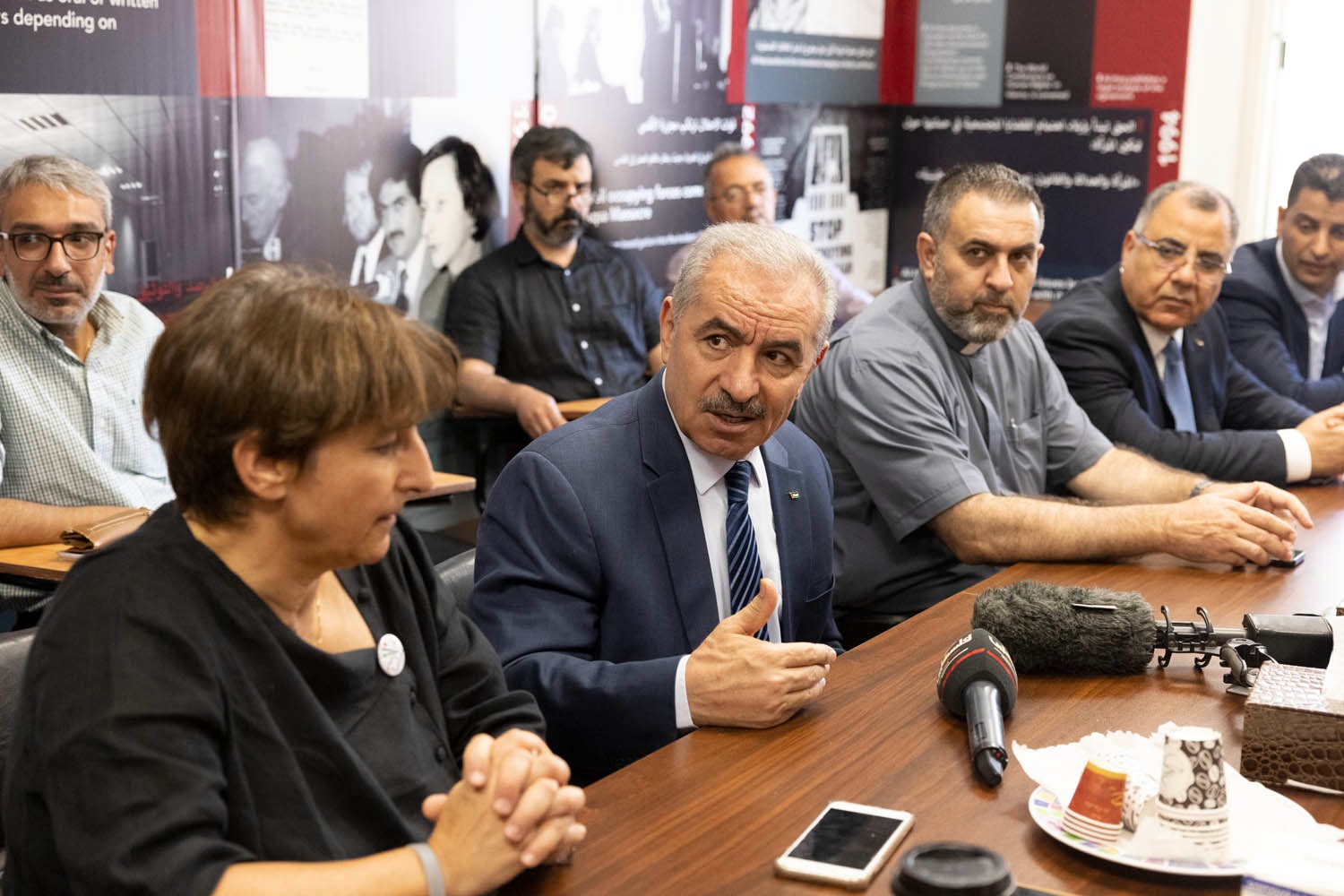 When asked by journalists whether he would act to open the offices, Shtayyeh replied: “Those who sealed the office should open it.”

According to Bisan’s Aboudi, Israel’s sense of impunity has emboldened it to pursue its plans with more vigor. “Let’s not forget that this comes just a few days after Israel admitted that it killed five children in the Gaza Strip,” he said.

“What they are attempting to do,” he continued, “is to reengineer Palestinian civil society, declaring which organizations are ‘good’ and which are ‘bad.’ And for them any organization that criticizes them, that talks about the rights of the Palestinian people to self-determination, economic rights and social rights, the historic narrative of Palestine — these are the ‘bad’ organizations that they want to shut down.”