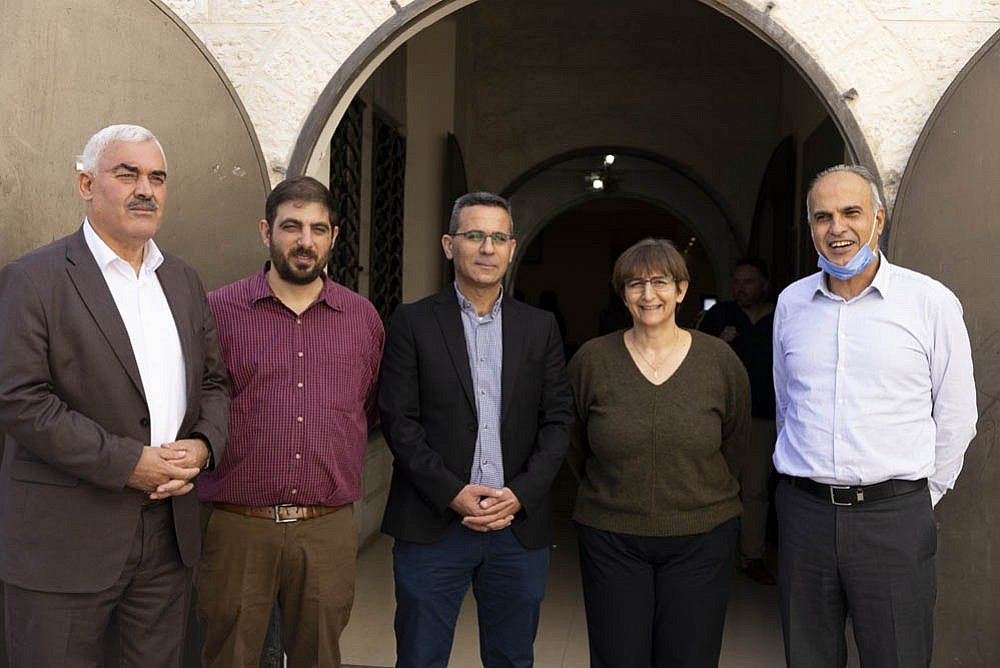 Chutzpah has long been a key ingredient of Israeli political strategy. When subtle tactics fail to assuage local resistance or international scrutiny, Israeli authorities will often confront their opposition with ferocious gall, pursuing their objectives with the weight of sheer self-confidence. When that attitude pays off — as it so often has for Israel — the hubris of the authorities metastasizes, emboldening them to be even more aggressive and zealous with their plans.

This quality, which hasbarists like to tout as an endearing cultural trait, did not do Israel any favors last week. In a brazen executive move, Defense Minister Benny Gantz outlawed six leading Palestinian human rights groups as “terrorist organizations,” accusing them — without showing any proof — of serving as arms of the Popular Front for the Liberation of Palestine (PFLP).

According to media reports, Gantz may have issued his orders without consulting the prime minister and other cabinet members, nor properly informing Israel’s allies abroad, including in Washington. While some Israeli newspaper editorials criticized the government’s refusal to present evidence for its decision, they have mostly done so from the view that the lack of transparency hurts rather than aids the state’s justified actions against these groups.

But poor planning is not the story here. Even if he acted alone, Gantz was effectively fulfilling a central doctrine of the Bennett-Lapid government popularly described today as “shrinking the conflict.” Though attributed to the Israeli philosopher Micah Goodman and his book “Catch-67,” it is in fact a decades-old policy that has been repackaged to reflect a core consensus in Israeli politics: that apartheid must stay, and Israel must have the audacity to defend it. 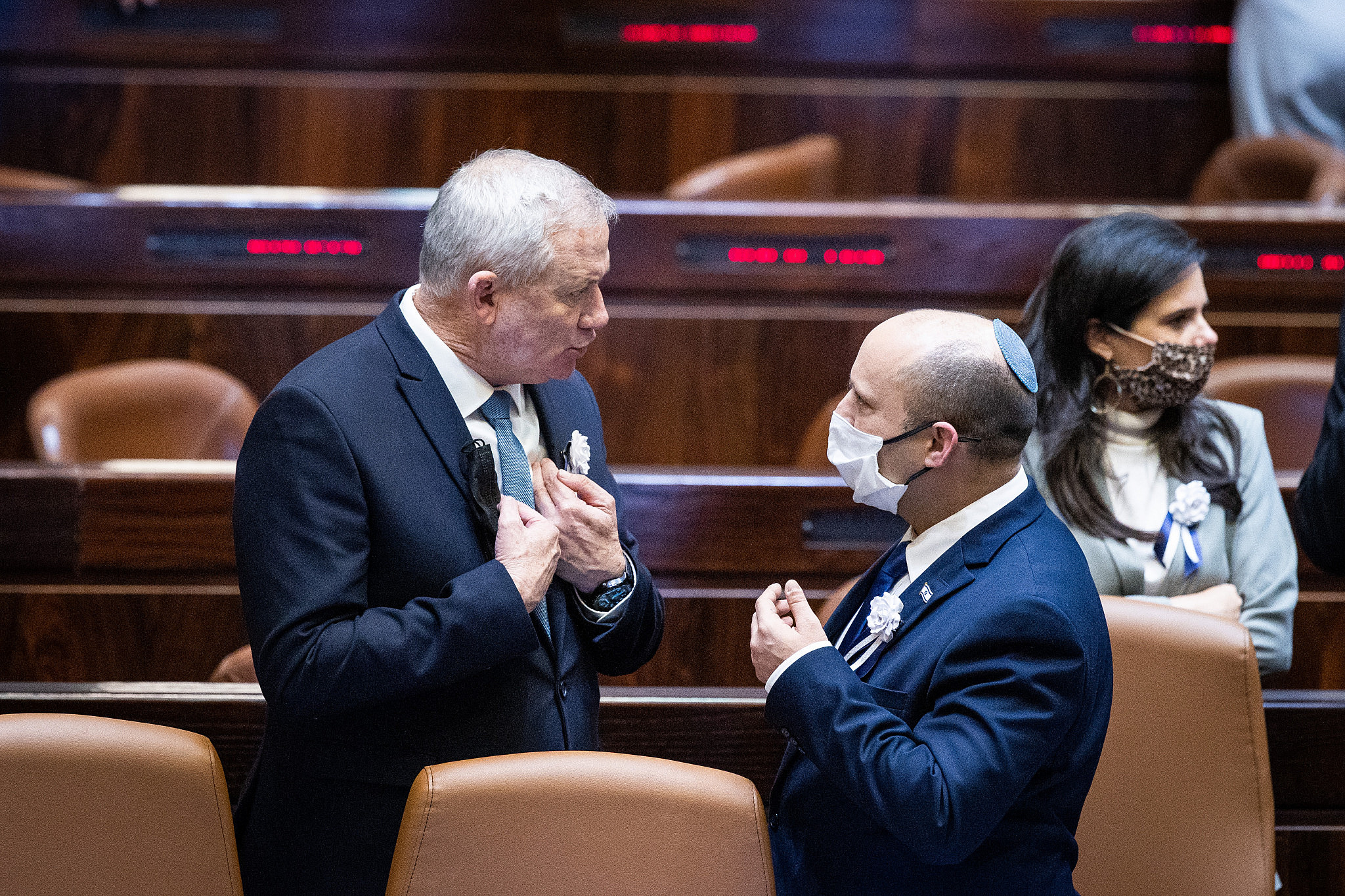 Notwithstanding the various proposals in Goodman’s book, which has reportedly become the policy bible for Prime Minister Naftali Bennett, the phrase “shrinking the conflict” is designed to espouse a simple idea: that Israel wants to reduce friction with the Palestinians, while toning down the political dramas that characterized the 12-year reign of Benjamin Netanyahu. This approach reflects the cautiousness needed to preserve the fragile new government, and aligns perfectly with the interests of Washington and Brussels — which, despite their political investment in the region, are desperate to take the Palestinian question off their agenda for the coming years.

The doctrine’s name, however, is a colorful example of Orwellian doublespeak. In practice, the government’s strategy is not about lessening tensions; it is about quelling opposition to Israeli power. Among other things, that means further confining the Palestinian leadership to its role as a local service provider and police force for the occupied population; advancing socioeconomic measures, such as increasing entry permits and financial aid, to keep Palestinians focused on their pockets rather than their politics; and shutting down the space for critics to challenge Israel’s policies, from college campuses to international bodies.

Put bluntly, this doctrine is far from a careful diplomatic strategy: it is a violent, ambitious plan to eliminate Palestinian agency in resisting apartheid. It is Israeli chutzpah in all its brutality.

It is under this doctrine that Gantz set his sights on the six Palestinian civil society groups last week. These NGOs, among many others, have been incubators for some of the bravest and brightest Palestine advocates worldwide. They are sources of employment and growth for young lawyers, scholars, activists, and writers who today are playing influential roles in the movement for Palestinian rights. 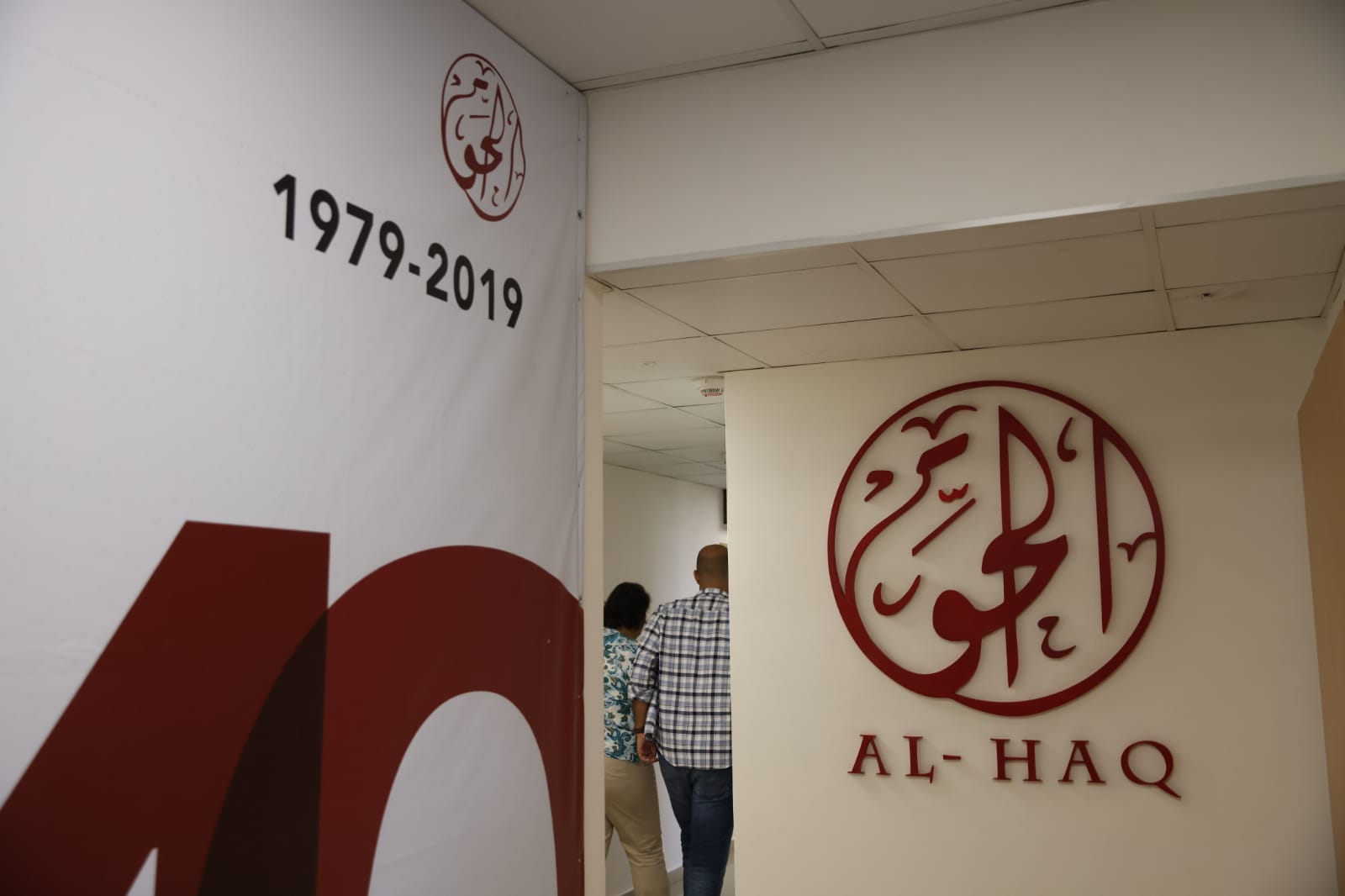 The work of these groups has been pivotal in exposing Israel’s rights abuses and turning the tide of global opinion against its regime, especially as the Palestinian political leadership remains fragmented and comatose. As Addameer’s director Sahar Francis told +972 this week, “We have been targeted for years, for one reason: we’re succeeding in changing the paradigm around the world by speaking of apartheid.”

The impact of these NGOs goes beyond the level of discourse. Al-Haq, for example, is among the main Palestinian groups providing evidence to the International Criminal Court, compelling the former chief prosecutor to open an official investigation into suspected war crimes. DCI-Palestine is at the forefront of Palestine advocacy on Capitol Hill, influencing landmark bills that seek to block U.S. funding that abets Palestinian rights violations. Addameer is the principal group keeping Palestinian prisoners on the international agenda while defending them before Israeli military courts. UAWC provides vital support to Palestinian farmers in Area C of the occupied West Bank, muddling Israel’s plans to swallow more land for its settlement enterprise.

Fearing the world’s receptiveness to Palestinian civil society, Israel and its allies found a perfect bogeyman in the PFLP, which is designated as a terrorist group by the United States and the European Union. Once a leading faction within the Palestine Liberation Organization, the PFLP today carries limited weight in a political scene dominated by the increasingly authoritarian Fatah and Hamas.

While its Marxist-Leninist ideology is influential in centering a class-based and anti-imperialist analysis, the PFLP has lost much of its historical clout, while its armed wing has greatly reduced its activities since the Second Intifada. Few observers abroad know much about the party (save for its infamous airplane hijackings in the 1960s and ’70s), and thus are unlikely to question Israel’s descriptions of the group. The strategy for Israel, then, was straightforward: paint human rights workers as “terrorists in suits,” and the PFLP as their tailors. 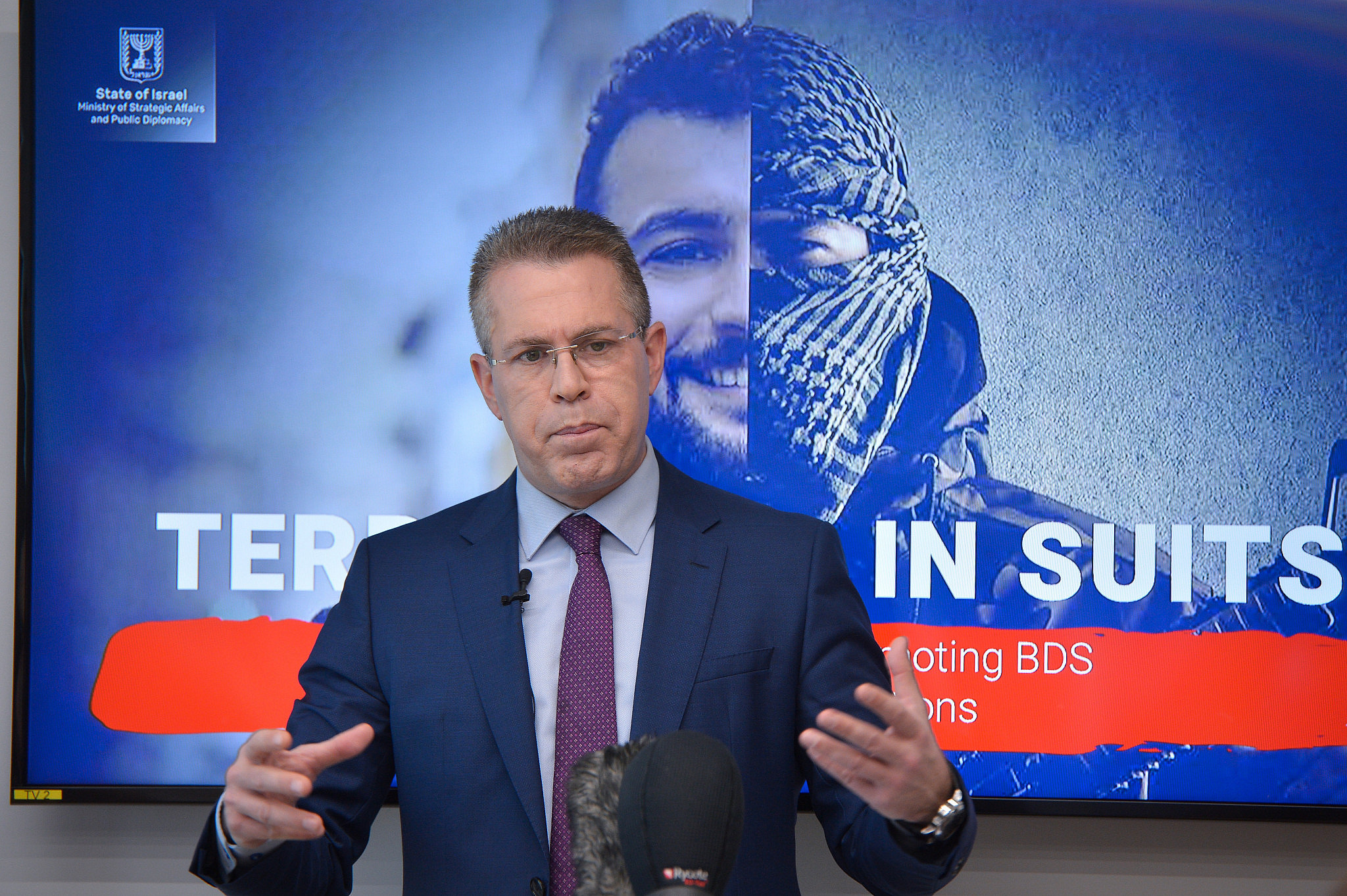 Through years of meticulous lobbying, the Israeli government and pro-Israel groups such as NGO Monitor, UK Lawyers for Israel, and Shurat HaDin have portrayed Palestinian human rights work as disingenuous at best and antisemitic at worst. The defamation worked: over the past decade, foreign governments and private foundations have intensified their scrutiny of the Palestinian civil society groups they sponsor, ordering countless audits and stipulating dubious grant conditions that Palestinian organizations fear will further constrain their activities. The audits alone have drained staggering amounts of time and energy from NGO staff, who ought to have been focusing on their core work instead of catering to the funders’ paranoia. None of the audits found anything to substantiate Israel’s sweeping allegations.

The toxicity of Israel’s campaign and the resources it stole crippled Palestinian civil society, yet the government and its allies still failed to crush the organizations for good. And so, last week, they moved to the most effective measure they had left: executive power.

Gantz’s orders, which followed the recommendations of the Shin Bet and the Justice Ministry, derive from the 2016 Counter-Terrorism Law, a colossal piece of legislation that grants Israeli authorities draconian powers under the guise of security needs. When it was being drafted, human rights groups — including those blacklisted last Friday — warned the law would make it easier for Israel to exercise authoritarian rule. That prophecy has been fulfilled.

The targeted Palestinian NGOs are no strangers to Israeli attacks. Along with the demonization of their work, their staff have been arrested, their offices raided, their clients brutalized, their donors intimidated, and their funding platforms shut down, to name just a few of the threats they’ve faced. But now, they are arguably entering unprecedented territory. Not only is the invoking of the Counter-Terrorism Law the most severe punishment yet, but the international community has shown little interest in putting Israel’s aggression in check. 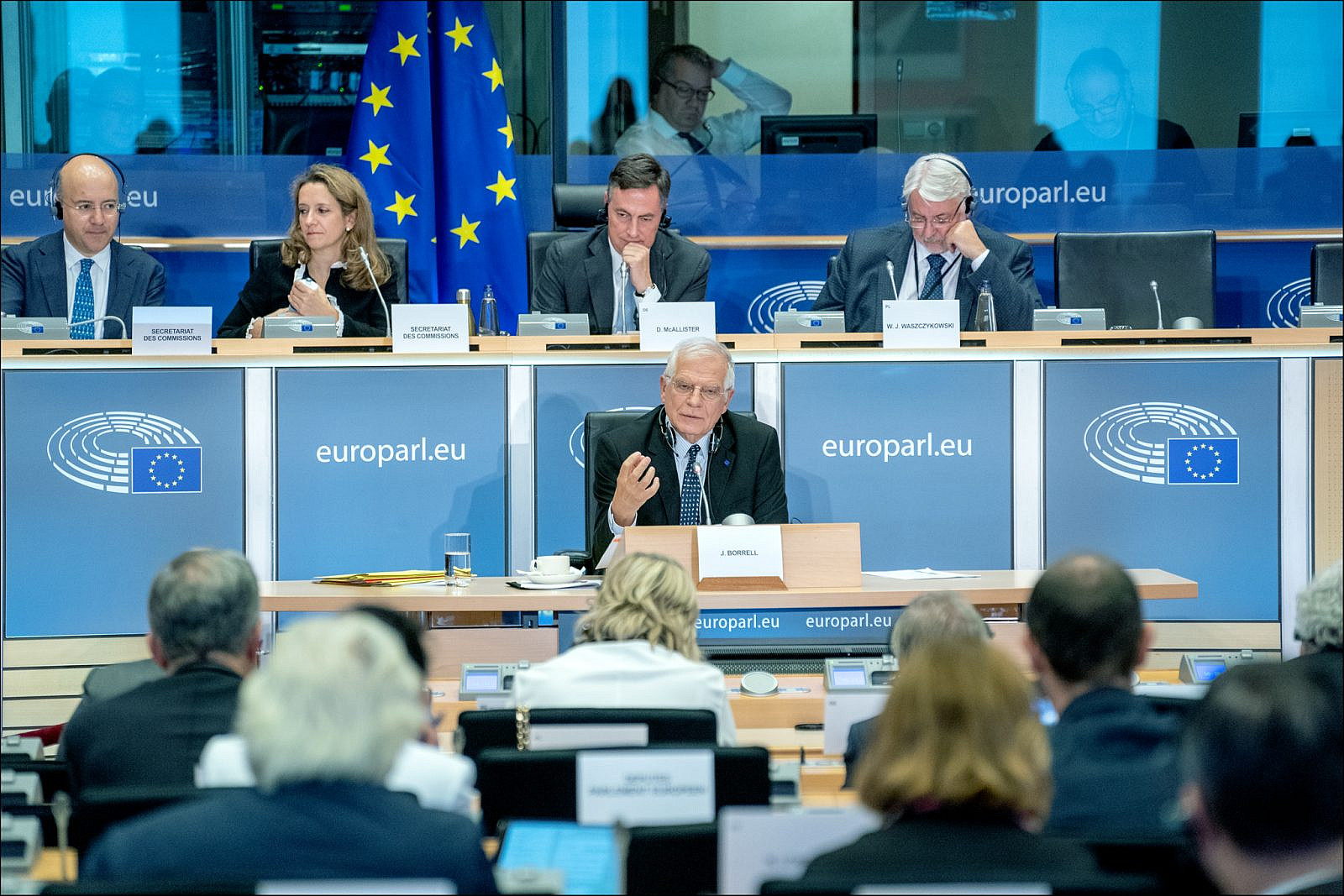 Indeed, it is infuriating to watch the timidity of foreign governments that were once so adamant about protecting civil society. Not long ago, European governments harshly criticized the Netanyahu government for enacting a 2016 law that required Israeli NGOs who receive over half their funds from foreign sources to declare that fact on all their documentation. The Europeans did not buy officials’ claims that the law was meant for “transparency,” and rightly called it out as an attempt to demonize human rights groups. That pressure, albeit limited, was critical in stymying the Netanyahu government’s worst impulses against Israeli civil society.

The responses from Europe to last week’s attack on Palestinian NGOs have not come close to the firm opposition shown five years ago. Frankly, this is absurd: not only is Gantz’s order far more serious than having to write a public disclaimer, but European officials, through their own extensive audits, have all the evidence they need to disprove Israel’s accusations.

In one form or another, these foreign governments have either internalized Israel’s malignant narrative or grown too fearful of speaking up against its policies. That impunity is the fuel for Israel’s hubris, ensuring that the state will face little to no consequences for pursuing ever more egregious actions. It was one of the definitive lessons of the Netanyahu era, and thanks to international complicity, it has been graciously learned by the Bennett-Lapid coalition.

But despite the dangers of this moment, the government’s blundering attempt to inflict its doctrine on NGOs has also betrayed its biggest fear. By all accounts, Israel’s control between the river and the sea has never been more assured: the Palestinian leadership is broken, Arab states are normalizing relations, the United States is stepping back from the peace process, and the wheels of military rule are running smoothly.

And yet, Israeli officials are terrified — not of militant groups firing weapons, but of millions of Palestinians and allies who are exposing the truth about the state’s oppression. Those officials are right to be scared: it is thanks to the mobilization of grassroots and civil society forces that media outlets are challenging Israel’s NGO assault, and that politicians are pressuring their capitals to back their rhetoric with action. For all its hubris, Israel remains fearful that a day will come when government allies will call out the state’s policies for what they are: political persecution by an apartheid regime. With every act of chutzpah, Israel may be bringing that day closer.