A 16-year-old Palestinian stabs a 19-year-old Israeli soldier to death in his sleep. That night, a completely unconnected Palestinian family’s home is set alight while they sleep, in revenge for the murder. 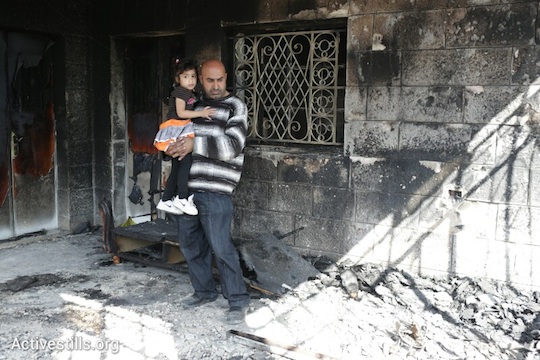 Khaled Abed a-Rahman Dar Khalil surveys the damage to his home while holding his daughter. Seven members of the Khalil family were inside their home when it was firebombed by Israeli extremists early Thursday morning. (Photo: Activestills.org_

A Palestinian home in the West Bank village Sinjil was firebombed early Thursday morning in an apparent revenge attack for the murder of an Israeli soldier yesterday by a Palestinian teenager. Seven family members were inside at the time. Graffiti left on the house read, “Regards from Eden, Revenge.” There is no known connection between the Khalil family and the family of the alleged murderer from Jenin. 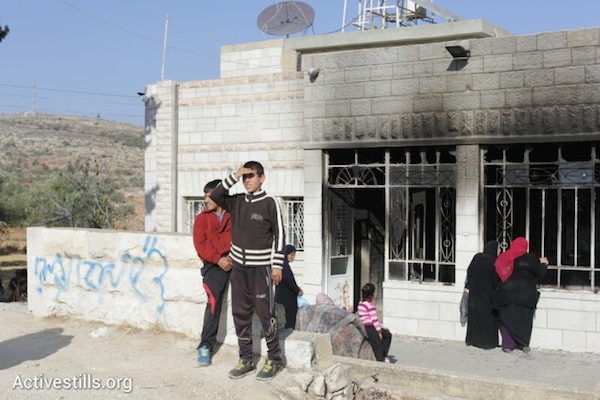 On Wednesday, Hussein Sharif Ghawadra, a 16-year old kid from Jenin, is suspected of murdering Eden Atias, a 19-year-old kid (and soldier) from Upper Nazareth by stabbing him while he slept on a public Israeli bus as it arrived in Afula from Nazareth.

Ghawadra has since been taken by the Shin Bet for questioning, along with his father and five siblings who have since been released. They were seen on Israeli TV yesterday saying they had no idea Hussein was planning the attack, were not looking for problems and supported peace between Israelis and Palestinians. Police claim Ghawardra said he committed the murder to take revenge for two family members incarcerated in Israeli jails.

According to B’Tselem (which, it is important to note, is the only Israeli body that released the name of the family whose house was firebombed, as none of the Israeli media thought it necessary to do so), Khaled and Rawida Khalil were asleep at home with their five children, ages ranging from one to seven, when they heard noises at around 2 a.m.. They spotted several people pouring gasoline at the entrance to their home, lighting it on fire and then escaping. 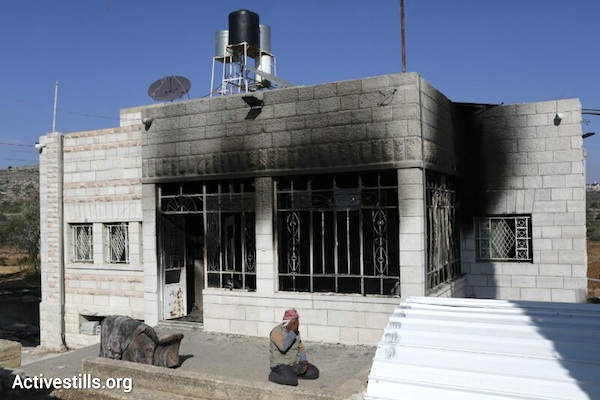 A member of the Khalil family outside his burned-out home in the West Bank village of Sinjil, near Ramallah. Seven members of the Khalil family were inside their home when it was firebombed by Israeli extremists early Thursday morning, November 14, 2013. (Photo: Activestills.org)

They called for help from their neighbors who called firefighters and police and tried to put the fire out, while the Khalil family was forced to flee to their roof, as the only exit to their home was on fire. Firefighters arrived 40 minutes after the call, the police and IDF, after an hour. All five of the children suffered smoke inhalation and requiring oxygen and first aid treatment. Their house and possessions suffered severe damage.

The IDF Spokesperson condemned the attack, saying in official statement: “[The attack] distracted the attention of security forces from their main mission, which is to combat terrorism, and undermines the relative security in the area.”

The IDF did not find it necessary to directly condemn the fact that Israeli civilians decided to take revenge on an innocent family while they slept in their home. Peace Now has demanded (Hebrew link) the police relate to the act as attempted murder. (A request submitted to the IDF for further comment went unanswered at the time of this report. If and when it responds, this post will be updated.)

This is not the first time Israeli citizens living in the West Bank have committed revenge attacks for the murder of Israeli citizens. Last May, after Yitzhar settlement resident Evyatar Borovsky was stabbed to death, Israelis desecrated Palestinian graves. Also, Palestinian cars were vandalized in response to the recent murder in September of Israeli soldier Tomer Hazan in the West Bank.