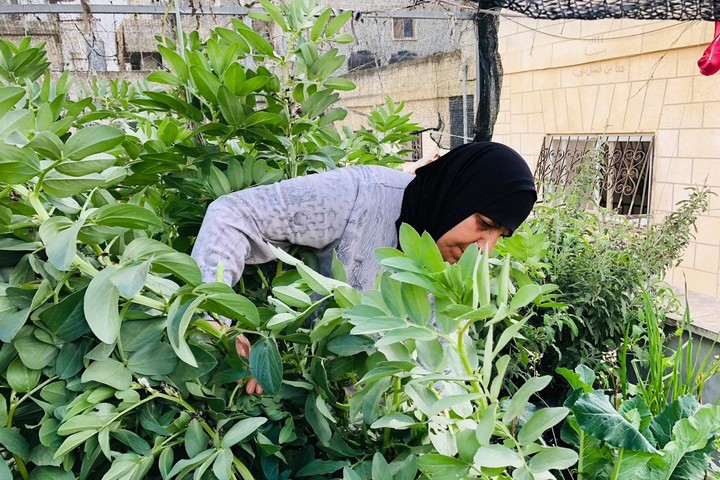 "There's nothing like waking up in the morning, picking tomatoes, cucumbers, and zucchini, and preparing breakfast." (Courtesy of Lajee Center)
facebook twitter email link
By Suha Arraf June 12, 2020 | Edit

With unemployment and poverty rates surging due to the coronavirus pandemic, Palestinians have returned to working their land, and vegetable gardens are sprouting alongside homes in the occupied territories.

One of the early initiatives arrived courtesy of the municipality of Beit Sahour, a town east of Bethlehem, which distributed a variety of vegetable and herb seedlings for residents to grow in their yards — including tomatoes, eggplants, cucumbers, onions, and potatoes. Some have already begun picking the produce to eat. The Palestinian Agriculture Ministry is supporting this self-sufficiency initiative, and has already distributed over a million seedlings.

This is not the first time that the Palestinian authorities have encouraged residents to grow their own vegetables during a time of economic hardship. A similar situation arose during the First Intifada, when there were high unemployment and poverty rates and Palestinians faced extended periods of closure and curfew. The Popular Committees and other political organizations at the time called on Palestinians to look after themselves and grow vegetables, and encouraged those in rural areas to raise chickens, cows, and goats in order to provide themselves with eggs, milk, and other dairy products.

This phenomenon is not exclusive to Palestine — it resembles similar initiatives in Western countries during the 20th century’s world wars, in which citizens were encouraged to grow “victory gardens” in order to combat food shortages. According to estimates, at one point during World War II these gardens were responsible for around 40 percent of Americans’ food consumption.

The ARIJ Applied Research Institute in Bethlehem — an area that has been particularly hard-hit by the coronavirus crisis because of its reliance on tourism — also responded to the economic impact of the pandemic early on, by distributing 40,000 seedlings to residents. Nader Hrimat, ARIJ’s deputy director general who is also the director of the organization’s sustainable agriculture program, says that the Second Intifada made clear the need to “support small agriculturalists with home gardens.” That’s when people began receiving small plots of land next to their homes, Hrimat explains, along with training and tools for growing plants.

“We worked in three areas — Hebron, Bethlehem, and Jerusalem,” Hrimat continues. “Gradually, we began supporting the entire West Bank. We also developed small chicken coops, and allowed those who had them to begin selling to their neighbors.

“We also worked to protect rare Palestinian seeds and grew crops from traditional Palestinian dynasties, before distributing them to farmers,” he adds.

Since ARIJ’s founding in 1990, Hrimat says, one of its main goals has been to safeguard agriculture and support small farmers. “We first investigate, and then introduce straightforward technology that is environmentally-friendly, trying it out with one farmer. If that’s successful, we then distribute the technology to all the other farmers,” he explains.

As for those with no land adjacent to their homes, Hrimat says, the institute arranges for people to grow gardens on their roof. Initially consulting with an Irish expert in 2012, he says, they learned how to use water pipes without adding too much weight, and began growing cucumbers, tomatoes, cauliflower, and more — with the project becoming even more successful than its land-based predecessor.

“We didn’t want to use the occupiers’ equipment, so we developed our methods using equipment we found in the Palestinian market,” he says. “We also try to reduce costs for the grower by utilizing everything there is.” 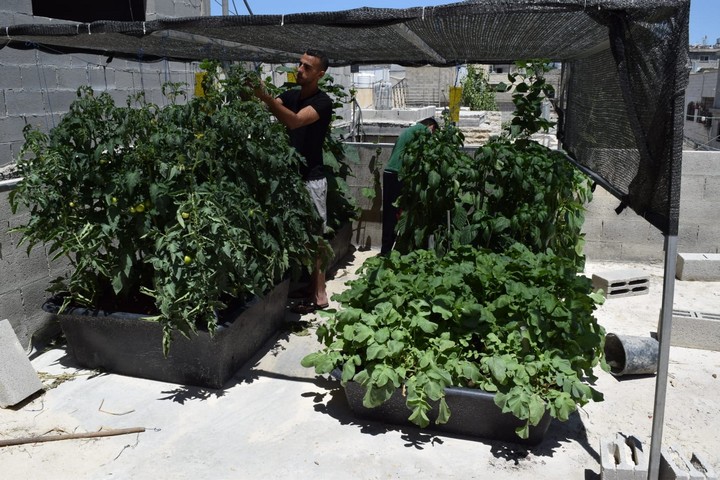 In refugee camps, meanwhile, the institute is assisting with developing more sophisticated water systems and planters, according to different households’ capabilities. With the help of these interventions, Hrimat says, it’s possible to reduce water consumption by up to 60 percent. The institute has also distributed greenhouse nylon so that refugee camp residents can grow plants year-round, and not just seasonally. Moreover, he notes, “it’s all organic.”

He adds that the home agriculture being practiced in the occupied Palestinian territories is sufficient to meet a family’s needs. “The types of vegetables they are growing means they don’t need to purchase them. And now, in the wake of the coronavirus crisis, it’s our duty to plant on every inch [of land].”

‘We need to trust in ourselves’

Ahmad Zabun, 56, lives in Al ‘Aza refugee camp next to Bethlehem, although he is originally from the village Alar near Tulkarm in the occupied West Bank. He began planting vegetables 10 years ago in plastic balloons, styrofoam boxes and whatever else he could get his hands on. Now, following ARIJ’s initiative, he uses planters and has learned how to grow using water.

“I encourage everyone to grow vegetables. From a political standpoint it’s important. If Israel closes the borders tomorrow, we’ll die of hunger. We need to rely on ourselves.”

Zabun grows vegetables, greens, fruits and herbs, and it’s enough for his family of five, he says. “But I live in a building with my brothers — another five families — and they also eat food from my roof. Even my neighbors take some of my herbs.

“There’s nothing like waking up in the morning, picking tomatoes, cucumbers, and zucchini, and preparing breakfast,” Zabun continues. “It’s also amazing to watch the vegetables grow. I’ve learned a lot by myself, and even bought aquarium pumps and adapted them to use agriculturally. I also try to grow at zero cost,” he adds, noting that he composts and rarely needs to use water. And his neighbors are taking note, coming to his roof garden to learn how to grow vegetables for themselves.

“A month into the [pandemic], we sat down with six NGOs and planned out the private gardens,” ARIJ’s Hrimat says. “The hunger and frustration started after a month, and people didn’t know what to do. We were afraid that people would get sick of being under lockdown and that they’d start to go out, spreading the virus.

“We started in Bethlehem,” Hrimat continues. “We told the Minister of Agriculture that we’d start working on this, then connected with Palestinian nurseries. We actually received donations of 90,000 seedlings and 66 pounds of seeds. Each family got 100 seedlings and three sacks of different kinds of seeds, and fertilizer and irrigation systems which we provided, and we taught them how to grow.” Refugee camps received 50 percent of the supplies, Hrimat adds. 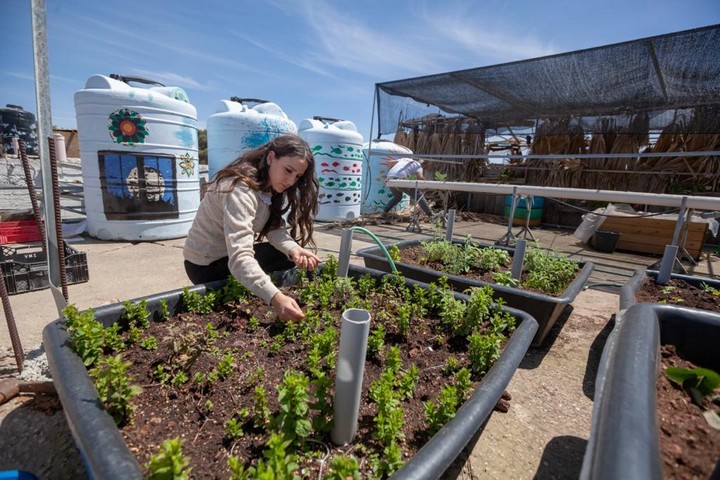 “Our primary goal is for each family to have enough to eat,” says Shatha Al’aza, here seen planting. (Courtesy of Lajee Center)

Over 2,000 people registered for the initiative after they published it on Facebook, Hrimat says, and participants collected supplies from designated locations or had volunteers drop them off at their homes.

“People went back to basics, and that helped them emotionally,” Hrimat continues. “Suddenly there’s a garden on the roof, there’s somewhere to breathe, something to keep you busy. It also strengthened familial and neighborly relationships. People sent us pictures of entire buildings full of neighbors growing their vegetables together, which was very moving.”

Hrimat describes another initiative in Beit Sahour, in which young volunteers planted vegetables on land belonging to the Christian waqf (religious foundation) — which they then distributed to needy families.

Shatha Al’aza, 27, who lives in Aida refugee camp in Bethlehem but is originally from the village of Beit Jibrin northwest of Hebron, volunteers at the Lajee Center, which caters to young people in the camp. Along with music, dabke (Palestinian folk dance), and soccer classes, the center also provides medical services, and hosts volunteers from abroad as well as local doctors. In 2014, Al’aza was invited to set up a conservation unit at the center.

“At first, I gave lectures to school students,” Al’aza says. “We set up our first composter and started recycling. Then, in collaboration with ARIJ, we began instructing residents on how to grow vegetables on their roof.”

Al’aza and her team carried out a trial run on the roof of the Lajee Center, planting a variety of vegetables. Yet the center is close to an Israeli army base, she says — and soldiers “kept throwing tear gas which damaged the vegetables.” In response, she says, her team covered the vegetables with greenhouse nylon to protect them.

After the test run, the center distributed vegetable seedlings to 40 different families in the refugee camp, as well as planters provided by ARIJ.

“Our primary goal is for each family to have enough to eat,” Al’aza says. “The second goal, which is no less important for refugees, is to strengthen their connection to the land they lost. So we’ve created alternative land.”

Al’aza also wanted women to be involved with the project, she says. “As a woman and a refugee, it was important to me to build up the women [here] so they would have something useful to do, especially because most are homemakers who suffer from poverty. I wanted them to pass on their love of the land to the next generation.

“Land and agriculture are forms of cultural heritage,” Al’aza continues. “Most refugees in Aida came from rural areas and lost all their land. We have no control over the land, the air, the crossings, the water — nothing. We should at least have control over what we eat, and know that what we put in our stomach is food we grew.

“Currently 80 percent of our food comes from Israel, and it’s their leftovers.”

The cramped conditions in Aida refugee camp, and the lack of open spaces and yards, means that many roofs receive little sunlight, Al’aza says. Another issue is that many roofs are not solid enough to be able to support the weight of planters.

Nonetheless, more people have been approaching the Lajee Center since the coronavirus outbreak, and Al’aza has encouraged people to start growing vegetables by launching a competition to find the most beautiful roof garden. Now, she says, she’s starting another initiative: “leasing land for women to work on, and then splitting the profits from the vegetables we grow and sell.”

Before you go…
A lot of work goes into creating articles like the one you just read. +972 Magazine is nonprofit journalism, owned by many of our writers, editors, and journalists. In order to safeguard that independent voice, we are proud to count you, our readers, as our most important supporters. With your support, we can keep +972 Magazine a strong, independent, and sustainable force helping push the global discourse on Israel/Palestine.
DONATE
More About Local Call