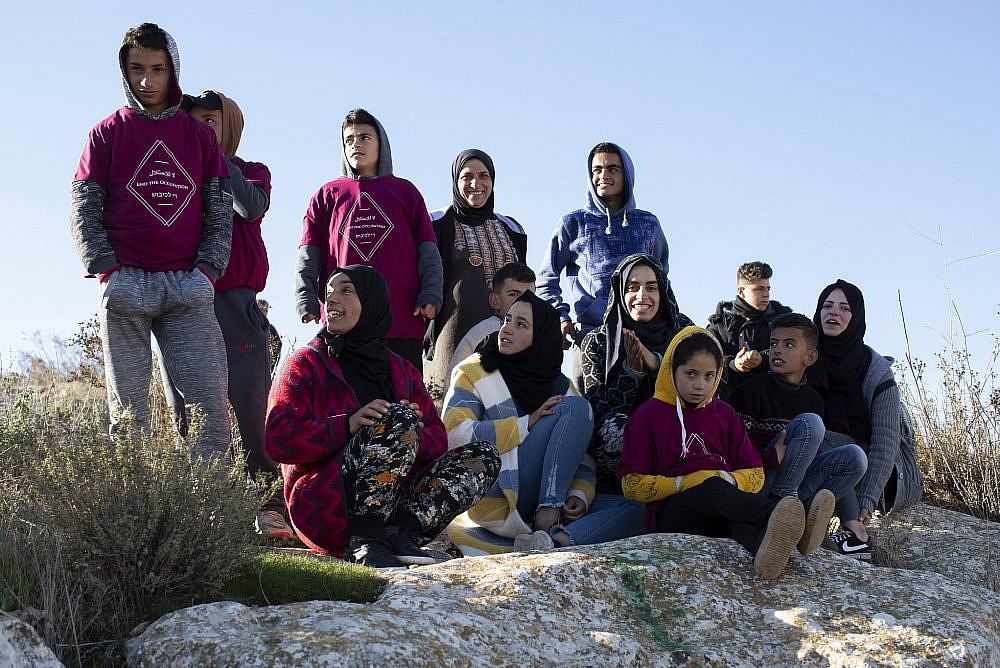 Kifah Adara lives less than two kilometers from the Ein Albeida spring in the southern West Bank, but was unable to visit the site for nearly 15 years.

On Friday, however, she was finally able to draw water from the spring once more — accompanied by over a hundred Palestinian, Israeli and international Jewish activists, who led a joint direct action at the site.

Local Palestinians’ difficulties accessing Ein Albeida, which means “The White Spring,” began in 2001, when the Avigayil outpost was established on a nearby hill. When the outpost was expanded in 2004, Palestinian residents were completely blocked off from the site. It is one of more than 60 natural water springs that have been taken over or are at risk of takeover by Israeli settlements and Israeli authorities.

“I was so happy today,” said Adara, a prominent activist who lives in the nearby town of a-Tuwane. “I remember coming to this spring with women from my village to collect water for our families. We would travel on our donkeys, just like we did today, but once Israeli settlers began swimming in this spring, it was no longer safe for us to drink [from here]. 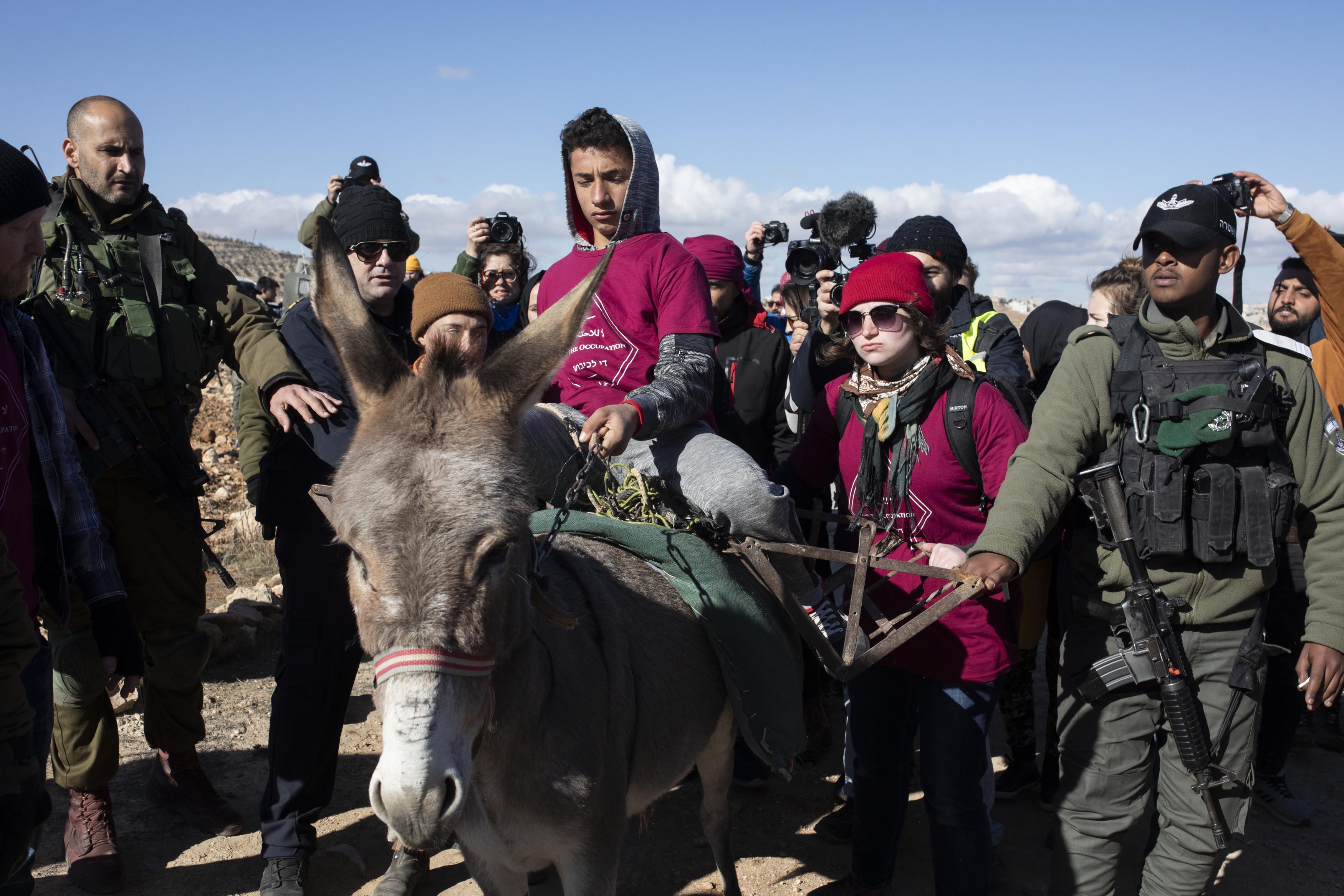 “For many years, we could not access the spring at all,” Adara continued. “I hope that, through the work we started today, the people of this region can use this water again.”

Arriving early in the morning, activists began cleaning up the site around the spring and planting olive trees. They also affixed a sign with the name “Ein Albeida” in Arabic and English to the back of an existing signpost reading “Avigayil Spring,” the name given to the site by local settlers. Shortly after, settlers destroyed the new sign and took down the Palestinian flags that had been flown alongside it.

The work continued throughout the day, despite several attempts by the Israeli military and settlers to intimidate the activists, and in the end the spring was successfully reopened. 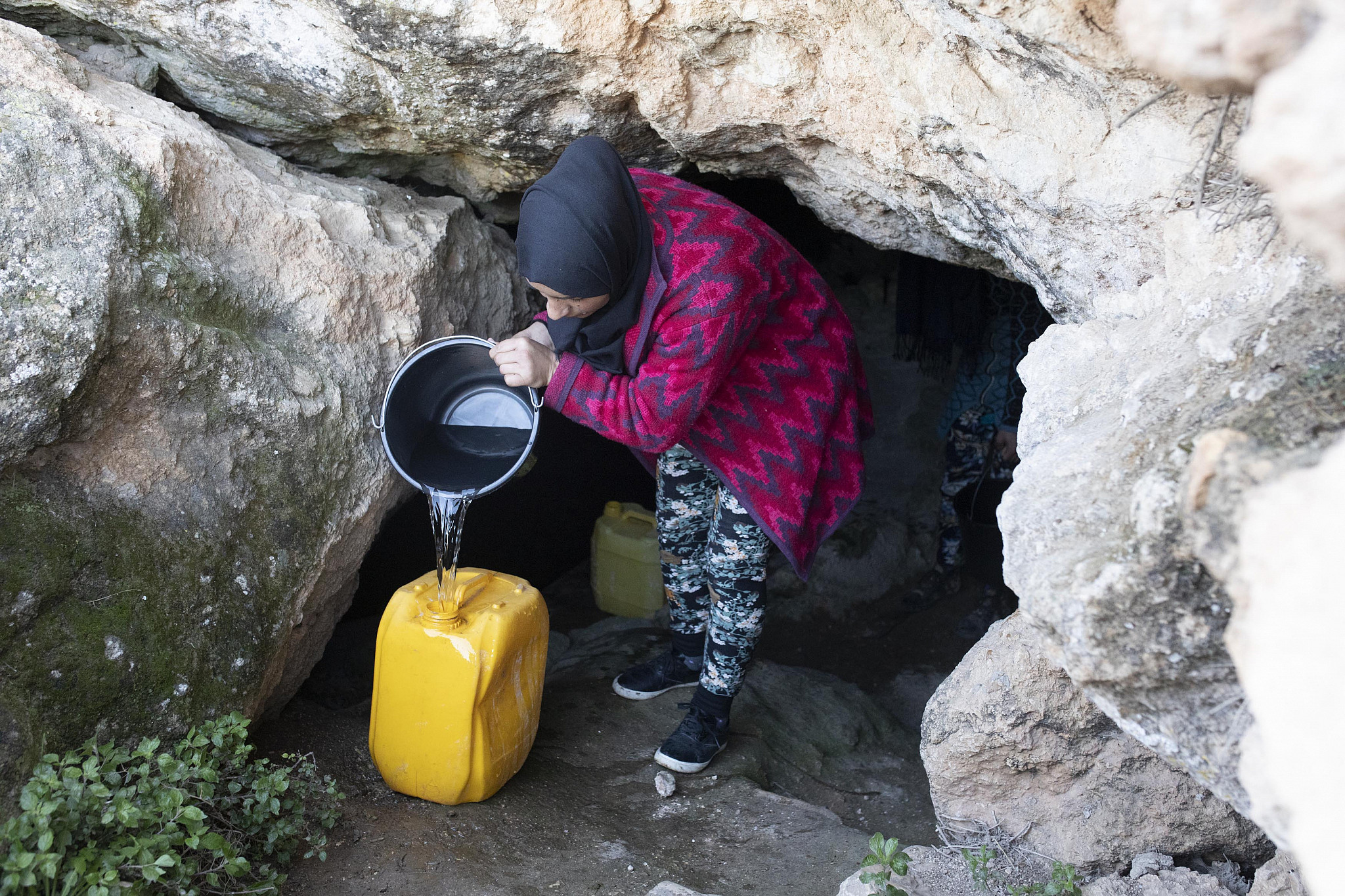 After they lost access to the spring, local Palestinians were forced to purchase water from tankers that came to the area, at a multiple of the price paid by settlers whose water is provided by Israel’s largest water company, Mekorot.

Palestinian communities around the spring are also not connected to electricity and water. The Avigayil outpost, despite being illegal even under Israeli law, is hooked up to all basic utilities.

“We came here to restore Palestinian access to this spring that they lost with the illegal outpost,” Chagit Lyssy, who took part in the action, told +972 Magazine. “Access to water is a basic need, so we wanted to stand in solidarity with them.”

Eliana Boswell, originally from the U.S. and a member of All That’s Left, added: “As an American Jew and someone who grew up with strong ties to Israel, I think it’s important that we have a say in what Israel looks like and make sure that the state which speaks in the name of Jews does things that are aligned with our values.

“It’s important that we speak about the occupation,” she added. 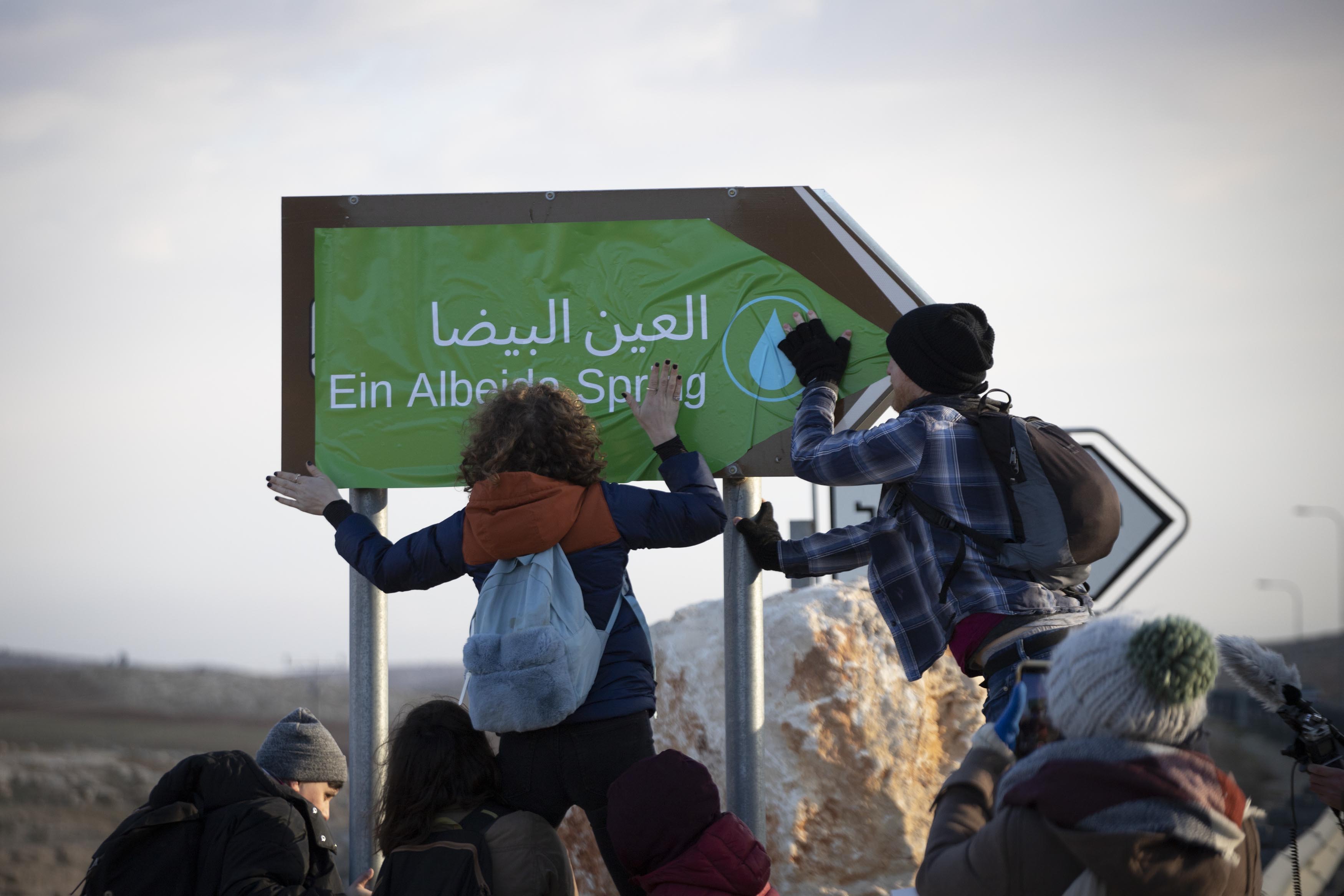 Unlike with most protests and direct actions that take place in the West Bank, which are usually broken up by Israeli security forces, the soldiers and Border Police who arrived at the site allowed the activists to continue their work.

The police initially blocked members of the group from planting olive trees and pushed them back from the site, but eventually relented. Indeed, one of the most striking aspects of the day was the fact that the army suddenly seemed prepared to allow Palestinians — accompanied by Israeli and international activists and journalists — to access a spring from which they’d been barred for many years.

American-Jewish activists drew connections between the occupation and U.S. support for Israel.

“What we see in America is a crackdown on all kinds of solidarity,” said Elon Glickman, a member of the Center for Jewish Nonviolence. “My message to American Jews back home is that the liberation of Jews is inherently linked with the liberation of the Palestinian people. It is important for us not only to oppose the occupation but to be doing this work led by Palestinian people to bring freedom and dignity to all in this land.”

“We are happy that we could reach the spring,” said Basil Adara, a resident of the area and a member of the Protection and Sumud Committee. “It’s a good beginning and we hope we can go back there again and again and start using it regularly.”

Adara noted that Palestinians were wary of approaching the spring because of its proximity to the road leading to the Avigayil outpost, which was built without a permit. Despite the Supreme Court ordering the road to be removed, it remains in place — in contrast to nearby Palestinian structures that have been torn down by the Israeli authorities.

“[The settlers] want the land without its Palestinian residents,” said Said Raba, a local resident. “As soon as we build the Israeli authorities show up, but they build in the outpost undisturbed.”

“Every week we have a least one day of demolitions in these communities,” added Adara. 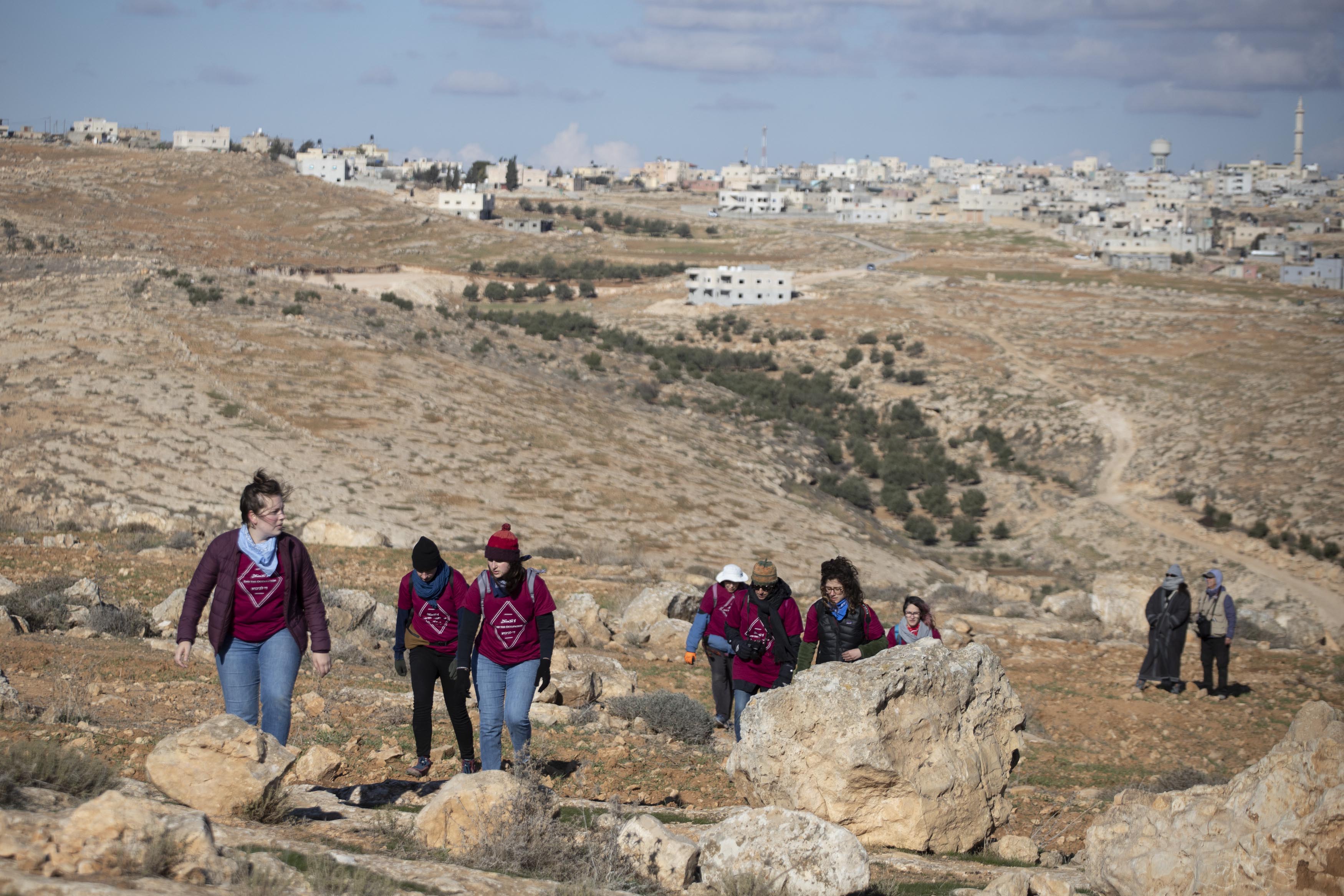 Nonetheless, he acknowledged the importance of Friday’s solidarity action, and of participation by Jews and Israelis in anti-occupation initiatives.

“There [has been] a big change in this area since these activists start to arrive. It helps so much through transferring a message,” Adara said. “It’s important to show the world that there are Jews and Israelis that are against the occupation, and also that as Palestinians we are not against Jews but against the occupation, settlements and Zionism.”

For the past few years, international Jewish activists have traveled to the South Hebron Hills in order to work in partnership with local Palestinian individuals and groups. Two years ago, activists marked 50 years of occupation by establishing the “Sumud” protest camp. The military aggressively evicted the site on numerous occasions, but the Palestinian family returned to the site from which they’d been expelled remains there to this day.

Last year, around 125 people restored a road in the area, which ended with the Israeli army forcibly arresting 17 activists and two journalists.

Communities in the South Hebron Hills suffered dozens of demolitions or confiscations of water-related infrastructure in 2019. Palestinians across the West Bank and Gaza receive levels of safe drinking water far below international standards. As the situation has continued to deteriorate, so has the attention and engagement of local and international activists intensified.

email
Before you go…
A lot of work goes into creating articles like the one you just read. +972 Magazine is nonprofit journalism, owned by many of our writers, editors, and journalists. In order to safeguard that independent voice, we are proud to count you, our readers, as our most important supporters. With your support, we can keep +972 Magazine a strong, independent, and sustainable force helping push the global discourse on Israel/Palestine.
DONATE
More About sumud 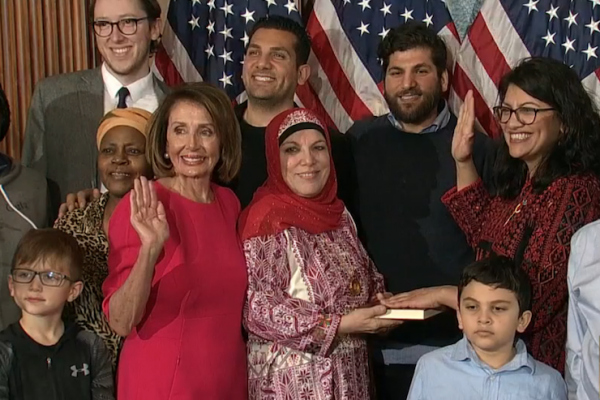 We will not be erased: Why Palestinians are storming social media on April 30
Culture matters because it is proof of Palestinian identity and existence. Preserving it and celebrating it is a form of cultural sumud. By Susan Muaddi Darraj In her essay “On the Meaning of Sumoud” for the Palestine Chronicle, Benay Blend defines sumud — which means “steadfastness” in Arabic — as “a mental state of resilience…
By +972 Magazine April 30, 2019 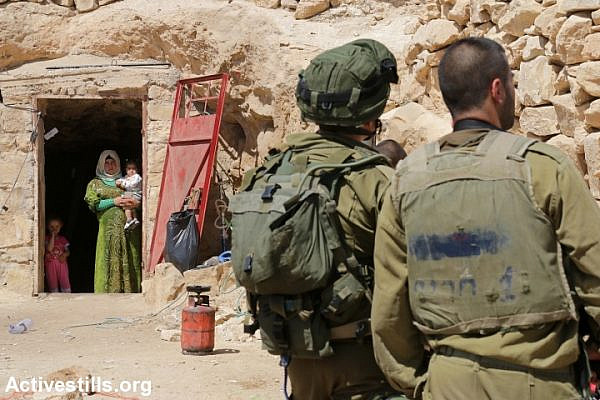 Beyond protesting occupation, ‘Sumud’ is protecting life
This movement has triggered in my soul something bigger than Sarura, more sacred than my political rights as a Palestinian, and more profound than reaching a political settlement to the Palestinian-Israeli conflict. By Sami Awad For over a month now, I have been involved with a group of Palestinians, Israelis, and internationals in a new…
By +972 Magazine July 6, 2017 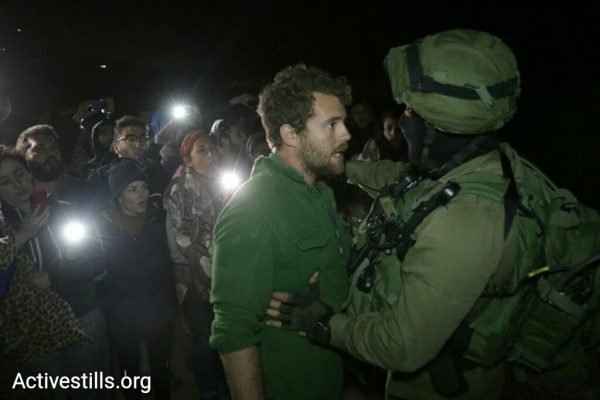 WATCH: Israeli forces dismantle West Bank protest camp
Soldiers dismantle a protest camp built by Palestinians, Israelis, and diaspora Jews in the south Hebron Hills — less than 48 hours after it was built. Video by Ahmad al-Bazz/Activestills.org Dozens of Israeli soldiers dismantled on Saturday night a protest camp in the West Bank village of Sarura, which was established by Palestinians, Israelis, and diaspora Jewish activists…
By Mairav Zonszein May 21, 2017