An Israeli anti-miscegenation group is threatening a Palestinian-Jewish couple, calling for protests at the venue on the day of their wedding.

Palestinian resident of Jaffa, Mahmoud Mansour, has reportedly hired 14 security guards to be present at his wedding next week to Morel Malka, a Jewish Israeli, for fear he may be harmed by members/supporters of the radical anti-miscegenation group Lehava.*

According to a report in NRG (Hebrew), Lehava – whose mission is to prevent marriage between Jews and non-Jews, and thus “save the daughters of Israel” – got hold of a copy of the wedding invitation on social media and reportedly published it in full, providing the date and location of the wedding, and called on people to come out in full force and protest. 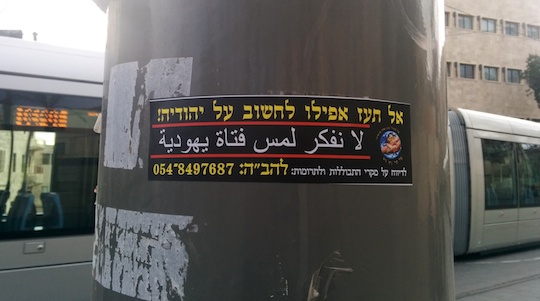 A sticker from the anti-miscegenation group Lahava is seen on an electrical post in Jerusalem. The sticker reads: ‘Don’t you even dare to think about a Jewess,’ in Hebrew and Arabic (photo: Michael Omer-Man)

Lehava’s website is currently under construction and its Facebook page was removed two weeks ago (Hebrew) due to user complaints of incitement. The article quotes Lehava head Benzi Gupstein as saying that “We are still at war and she is marrying a member of the enemy,” adding that the wedding is especially infuriating because it is taking place in the center of the country and not in “one of their villages.”

A similar organization, Yad L’Achim, whose motto is “We don’t give up on even a single Jew,” also called attention to the wedding, however it did not publish the information. A status was published on its Facebook page showing a blurred photo of the bride-to-be and urges users to encourage her to call off the wedding. It has over 2,000 likes and 600 shares.

*I refer to the group as anti-miscegenation because they oppose relations between Arabs and Jews – technically that is an ethnic matter and not a racial one, but nonetheless I think it applies in this context.