Palestinian Prisoners’ Day was commemorated today in the occupied territories and Israeli prisons in a fashion far more intensive than in previous years. More than two thirds of the 4,635 prisoners held by Israel (of whom 320 are administrative detainees and 183 are minors) returned their meals today, according to the Israeli Prison Service, and about a quarter of those declared they will continue with their hunger strike until their terms are met (see below). Eight “flytilla” activists awaiting deportation and held in custody also refused to eat today in solidarity with the Palestinian inmates. Two detainees who have been striking for over 40 days are in the hospital and their condition is deteriorating.

Meanwhile thousands protested today in Gaza, Ramallah, Nablus, Tulkarm and Qalqilya, showing solidarity with the prisoners and calling for their release. Fatah leader Abbas Zaki proclaimed “There will be no peace and no safety without releasing all prisoners from Israeli jails.” After the central demonstration in Ramallah hundreds of people went to protest near the Ofer military prison, were political prisoners are held, and were dispersed by the Israeli army with tear gas and the “skunk” water canon. 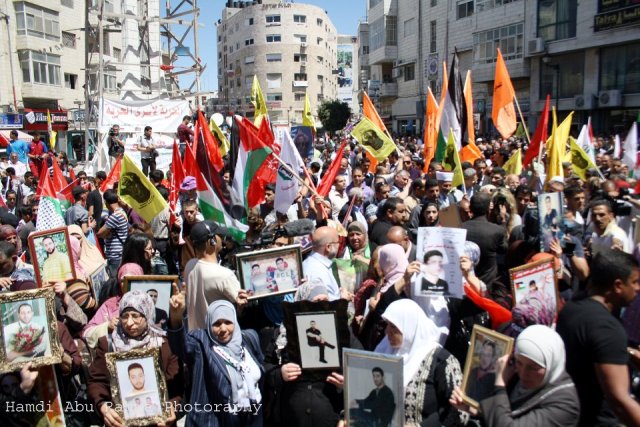 The year of the prisoners

Over the past year the question of prisoners took the forefront in Palestinian politics, and at times even in the otherwise uninterested Israeli public, mainly due to the Schalit prisoner swap which finally took place last October. Little before the deal was struck there was one collective hunger strike of about 100 prisoners, followed up in the beginning of 2012 with Khader Adnan’s 66 day long hunger strike. Israel secured a deal with administrative detainee Adnan, and he was released today in a warm welcome as part of the Prisoners’ Day protest. Adnan’s strike was shortly followed by administrative detainee Hana Shalabi, who after 43 days of hunger strike, and in grave risk of her life, was released and deported to Gaza, banned from returning to her home in the West Bank. Shalabi played a central role in the protest in Gaza today.

These two major hunger strikes drew international attention to the issue of administrative detainees, held without charge or trial, and led many other detainees to join the protest. Bilal Diab (27) and Tha’ir Khekhle (34) have passed the 40-day mark of their hunger strike, and are now in the IPS hospital. Diad has been in detention for eight months now, and Khlekhle – more than two years. He has not yet seen his 22-month old baby, born after his detention. The two are examined regularly by Physicians for Human Rights doctors, and the NGO has expressed concern over their condition, calling for their immediate release.

The new strike, however, focuses on wider issues than the arbitrary detention, much like the strike that took place about six months ago. Prisoners are demanding a cancelation of new restrictions placed little before the Schalit swap, which, on top of existing discrimination between criminal and political prisoners, include an increased use of the solitary confinement of prominent leaders; a ban on Arabic newspapers, books and television; a halt on the transfer of funds from family members to prisoners, necessary for many basic food products, cigarettes and more; and discontinuing academic studies of the prisoners in Israel’s Open University, which enables distance learning. Prisoners ended the last strike as they were hoping Schalit’s release would bring an end to these new policies – but were disappointed. The question remains how long the new collective hunger strike can last, and what effects it will have on Israeli and international public opinion.

Also on the topic of prisoners – conscientious objector Noam Gur, imprisoned yesterday for refusing to join the army, refused today to wear her prison army-uniform, and is now in solitary confinement. More updates on her condition will follow.