In third such project in as many weeks, hundreds of Palestinians erect new neighborhood of Burin, calling it Manatir. The activists and village residents were quickly attacked by IDF soldiers and local settlers. 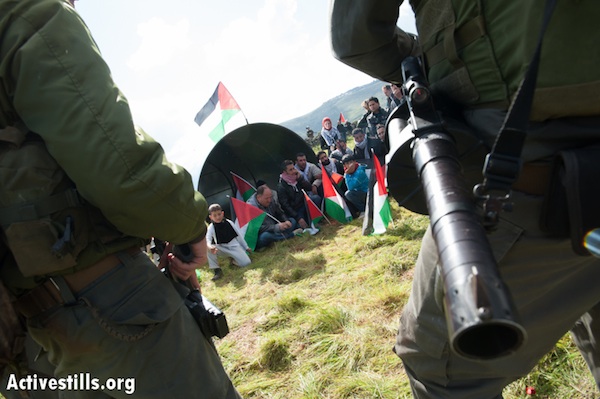 Update:
After hours of clashes where IDF troops reportedly shot live bullets, tear gas and rubber-coated bullets inside the village of Burin, the army completely cleared the new neighborhood of Al Manitar. At least five Palestinians were arrested throughout the day and an unknown number were injured. See pictures of Border Police dispersing activists here.

Some 300 Palestinians from the village of Burin and the popular committees against the wall and settlements set up a new neighborhood on village lands, according to reports, calling it Manatir. Israeli forces were quick to respond, sealing off the area to prevent supporters from coming in, and attacked the activists with tear gas, rubber-coated bullets and live bullets. Settlers were also attacking Palestinians in the area.

The new neighborhood, or outpost, was set up Saturday morning on privately owned lands in Burin, a village in Area B near Nablus, which has suffered greatly from settler violence in recent years. Activists on the scene told +972 that settlers have been expanding their activities on village lands, backed by soldiers, who in every instance of conflict declare the area a closed military zone and force only the Palestinians off the land – thus allowing the settlers to maintain control. The settlers of this region around Yitzhar are generally known as some of the most militant throughout the West Bank.

Villagers erected several tents and huts, but were quickly attacked by settlers who started throwing stones at them. Soon enough the army got involved as well, fighting the Palestinians back into the village and sending at least one resident to the hospital with a bullet in the leg. By the afternoon, access roads to the village were sealed off, settlers have been reported to be attacking Palestinian cars on nearby roads and the villagers and activists were trying to regroup to march back to the outpost. 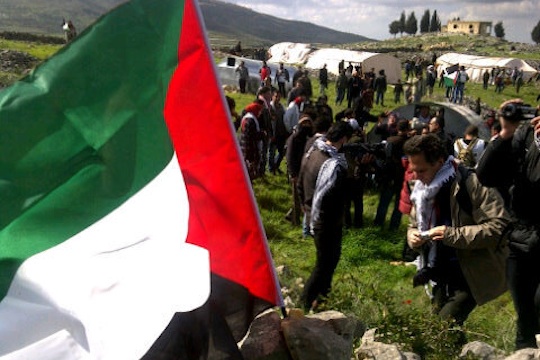 “This activity highlights the crucial need of enhancing and strengthening the culture of grassroots self-defense of our land”, said one of the organizers in a press release. “Furthermore, the action aims at removing settlers and settlements from Palestinian land”, she added. The press release also mentions how “Israeli settlements and land-grab[s] in the Occupied Territory has recently been highlighted by a report submitted to the UN’s Human Rights Council by an independent Fact-Finding Mission on Israeli Settlements in the Occupied Palestinian Territory. The report called on Israelto halt all settlement activity and to ensure accountability for the violations of Palestinians’ human rights, resulting from the settlements. The report also called on all relevant international actors, private or state-connected, to take ‘all necessary steps’ to ensure that they were respecting human rights, ‘including by terminating their business interests in the settlements’.”