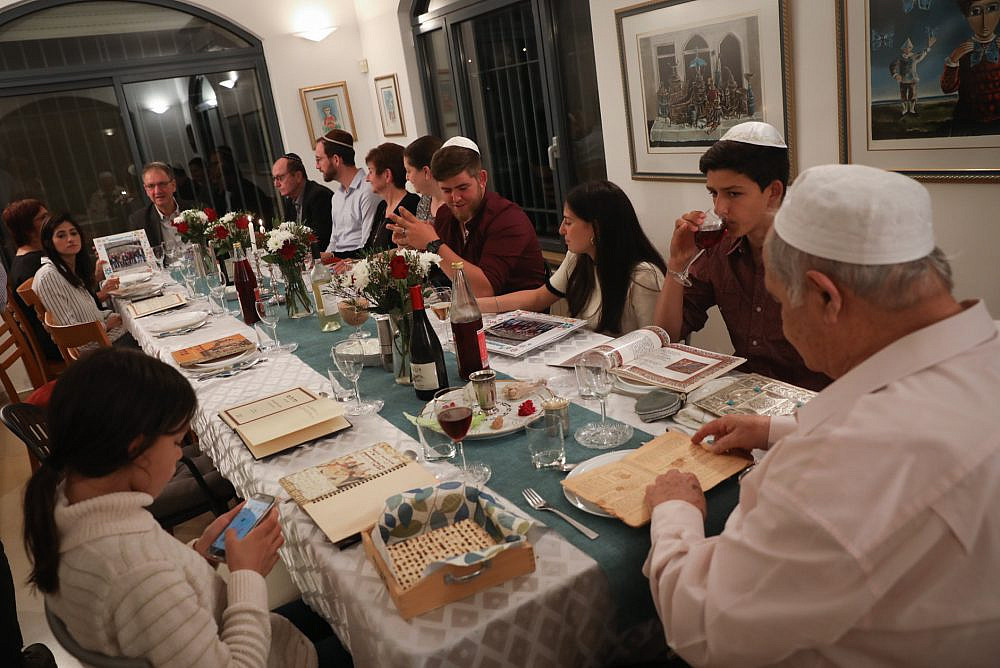 An Israeli family seen during the "Passover Seder" on the first night of the Jewish holiday of Passover, in Tzur Hadassah. April 19, 2019. (Nati Shohat/Flash90)

Tonight, we will sit, millions of Jews in Israel and across the world, for a sad and strange Passover Seder, perhaps the strangest many of us have known our entire lives. The lucky ones among us will sit among family members; others, including many of the elderly, will sit alone or have to make do with a virtual Seder.

Tonight, we will sing Passover songs. We’ll sing Ma Nishtana, the Four Questions, and long for the familial noise we complain about so often. We’ll long for the uncle with the boring jokes, the same one who insists on reading the Hagadah from start to finish without skipping over a single word. And of course, we’ll miss the pointless, exhausting political arguments.

A police vehicle has been stationed on the road outside my home since Monday night. The officers check the ID cards of the few cars that pass by. The closure that we place Palestinians under every Jewish holiday is suddenly imbued with a different meaning: we, too, are under closure.

It’s a startling thing for us to come to grips with, as Jewish Israeli citizens. The word “closure” appears as if from another semantic universe, as if totally unrelated to us by definition. But for others, whose fate is to be locked behind gates and denied free movement, closure is simply part of the natural order.

And all at once, it appears we find ourselves, Jews and Palestinians, sharing the same fate. The coronavirus has become the great equalizer, forcing both the occupier and occupied to live locked up inside their homes. Equality has found its way to this land, even if briefly, with the help of a raging pandemic, and we are now all in the same boat. Right? 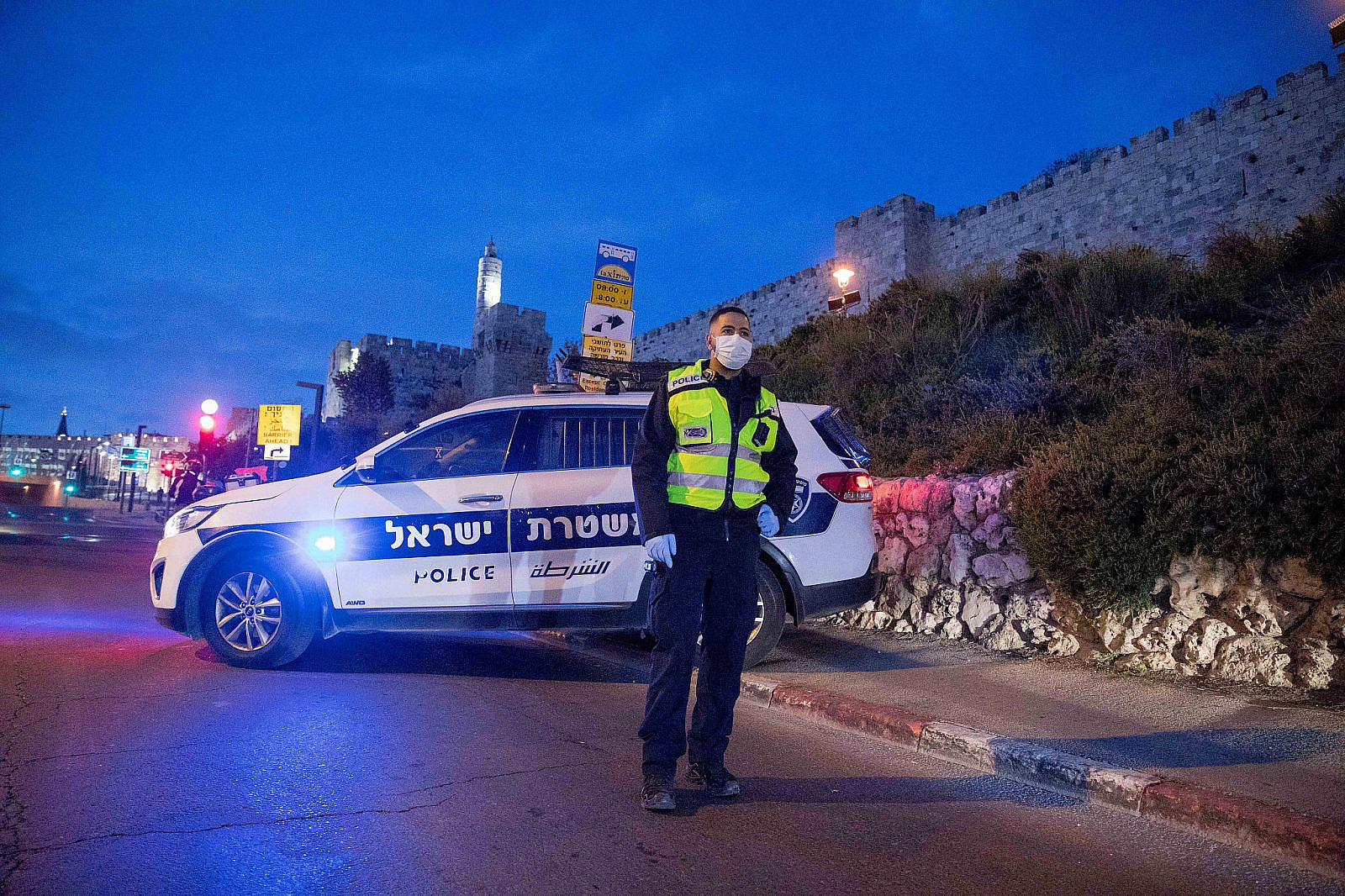 An Israeli police officer stands at a temporary “checkpoint” near the Old City in Jerusalem. April 7, 2020. (Nati Shohat/Flash90)

It’s easy to get swept up in this narrative — one that does not necessarily stem from insensitivity, but rather from a deep desire to express solidarity with the Palestinians and to view our hardships as linked. One should hope that schadenfreude (“finally Israeli Jews are getting a taste of their own medicine”) plays no part, but rather a need to see our helplessness reflected in theirs.

It is because I neither doubt the sentiment behind this sense of shared fate, nor underestimate the magnitude of the distress Jews are facing this week, that it’s important to make this point clear: there is nothing in common between our Passover closure in Israel and the repeated closures on Palestinians in the occupied territories.

As we sit at the table tonight, we will be locked in our homes under a closure that is first and foremost designed to serve us and our health. It’s not a punitive or arbitrary measure; and, even if we do have reservations about the degree of its necessity, we know that it is set by a government that the public — of which we are part — elected. Even the most radical left-wingers among us have the privilege of public debate and state institutions at our disposal.

A Palestinian, on the other hand, won’t be able to leave their home tonight because of a lockdown imposed by the occupying army of a hostile government that they have no ability to determine. They must sit at home because they have no choice but to obey even the most whimsical and arbitrary orders of this army, which is stationed in the territories to immiserate Palestinian life. 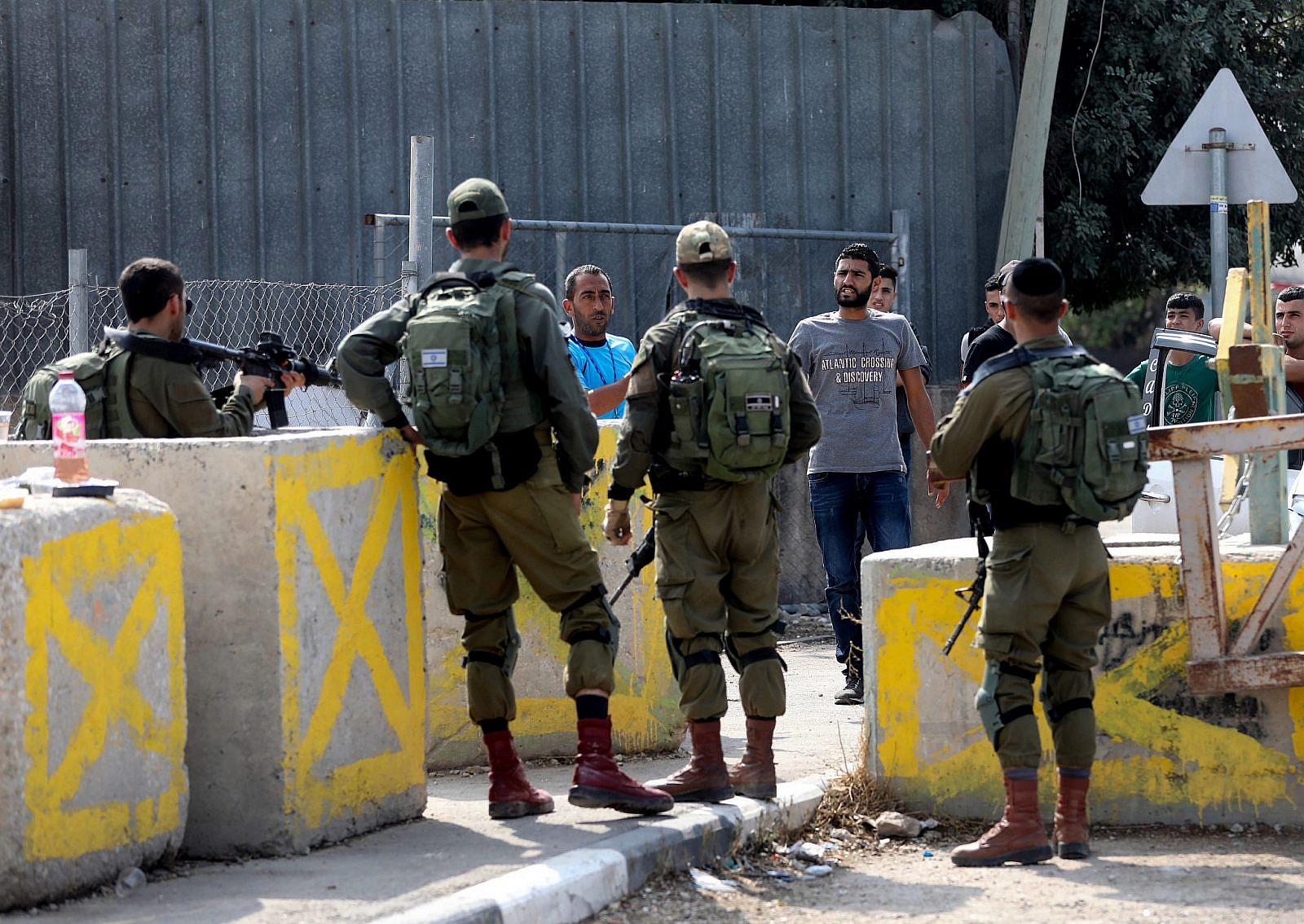 Israeli soldiers at a checkpoint in the West Bank city of Hebron. October 17, 2019. (Wisam Hashlamoun/Flash90)

When we sit at home because of the closure, we will do it not because we follow what is demanded of us as citizens, but as an act of solidarity with our own community — especially the most vulnerable among us. Most of us won’t resent the fact that police officers will be enforcing the closure and won’t get to spend the evening with loved ones. Should we be forced to leave our homes due to an emergency, we can expect the officers to be attentive and even helpful. At worst, we can expect to be reprimanded or given a fine.

On the other hand, a Palestinian who violates closure in the occupied territories is risking their life. The soldiers at the entrance of a Palestinian town or village won’t be pleasant, nor will they hear out the Palestinian before pulling the trigger. The Palestinian knows that, unlike with Israeli Jews, no one will bat an eye if they are shot by a soldier or police officer. It is highly doubtful that anyone in Israel will even hear about the incident.

We Israeli Jews will sit down tonight under a closure with an expiration date. Our Palestinian neighbors will sit under another closure in an endless series of closures. As we celebrate our liberation tonight, we know that our actual freedom won’t be undermined in the slightest. When Palestinians sit in their homes tonight, freedom will remain a far-off notion.

It’s not often that the same concept can describe two situations that are so far apart in their essence. That’s precisely what will happen tonight. And so, despite our subjective feelings, it is important not to be tempted, even in these circumstances, to depoliticize our reality. Israeli citizens will need to endure our lockdown for the night. The closure on millions of Palestinians, on the other hand, must still be defeated.