The following is a detailed response to the army’s claims regarding the death on 1 January 2011 of Jawaher Abu Rahmah, who was taken to the hospital on 31 December after inhaling tear gas at the weekly demonstration against the separation barrier in Bil’in, a small Palestinian village near Ramallah. The response was written by Jonathan Pollak, media coordinator of the Popular Struggle Coordination Committee. *

Contact details for all the eyewitnesses listed below are available upon request for journalists.

The evidence surrounding the events leading to the death of Bil’in resident Jawaher Abu Rahmah disproves completely the army spokesperson’s version, to the point of putting the army in a ridiculous light. The army’s version is based on claims made anonymously, without any supporting evidence – unlike the version of the Abu Rahmah family and the Popular Coordinating Committee of Bil’in, which is detailed below. 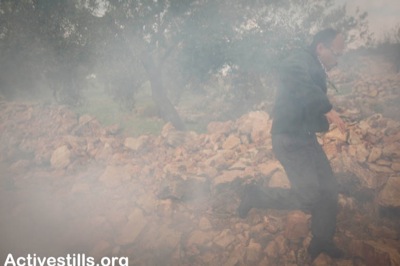 A Palestinian man surrounded by a tear gas cloud in Bil'in on 31 December 2010 (photo: Oren Ziv/activestills.org)

Since yesterday, the army has been promoting in the Israeli media a mendacious version regarding the events that led to the death of Jawaher Abu Rahmah of Bil’in on Friday, 31 December 2010. According to the army’s version, Jawaher was not injured by tear gas and was possibly not even present at the demonstration. The army spokesperson did not see fit to publish an official statement on the matter, instead passing the information to the media in the name of anonymous “army sources.”

The facts of the matter, which are supported by the testimony of eyewitness who were present at the demonstration, as well as by the ambulance driver who evacuated her to the hospital, contradict completely the army’s version:

Soubhiya Abu Rahmah, mother of Jawaher: “I was standing beside Jawaher on the hill that is near the place where the demonstration took place, when we were injured by a cloud of tear gas. Jawaher began to feel unwell from inhaling the gas and started to move back from the place; soon after that she vomited and collapsed. We took her to the nearest road, and from there she was evacuated by ambulance to the hospital, where she remained until her death. She was not sick with cancer, nor did she have any other illness; and she was not asthmatic.”

Ilham Fathi: I was on the roof of my house, which is located a few meters from where Jawaher stood. When the cloud of tear gas moved in our direction, I went downstairs in order to close the windows. While I was closing one of the windows, I saw her lose consciousness from the gas and ran over to her, together with Islam Abu Rahmah, in order to pull her away. We picked her up together and carried her to my garden. We called for help and she began to vomit and foam at the mouth.

Islam Abu Rahmah: “I was standing with Jawaher, her mother and my grandmother in order to watch the confrontation that was going on just in front of us, in the area of the fence. The wind moved the gas in our direction, making our eyes itch and tear up. After that she (Jawaher) began to cough and foam at the mouth. Soon after that she became weak and lay down on the ground. I succeeded in carrying her as far as the Abu Khamis home, about 40 meters in the direction of her house, but then she became terribly weak, vomited violently and foamed at the mouth. She was having difficulty breathing and lost her sense of direction. We got a few women to help her by waving a paper fan over her face in order to provide some oxygen. After that she was taken to the hospital.”

Saher Bisharat, the ambulance driver who evacuated Jawaher: “We received Jawaher near the entrance that is parallel to the fence, which is where the demonstration was taking place. She was still partly conscious, answered questions, and said that she had choked on gas. I took her straight to the hospital.” (Click here to view the Red Crescent report).

The army has also claimed that the reports about Abu Rahmah’s injuries started to arrive only several hours after the incident, in the evening. That claim is contradicted by a report sent via the Twitter account of NGO Jewish Voice for Peace (JVP), which reports the injury of Jawaher, including her name, in real time (click here to view). The tweet was sent at 2:36 pm Israel/PA time (4:36 am on the East Coast of the United States). Wafa, the Palestinian news service, published a report that includes the injury of Jawaher Abu Rahmah shortly after the event (click here to view).

Also according to “army sources,” which remain anonymous, Jawaher Abu Rahmah suffered from a serious illness, possibly leukemia; the “sources” postulate that she died from a pre-existing condition rather than tear gas inhalation. Several sources reject that claim.

Dr. Uday Abu Nahlah: “Jawaher Abu Rahmah was employed in my home on a regular basis. On Thursday she was at work as usual, healthy, only one day before her death.”

Jawaher had an inner ear infection, which affected her balance, for which she was recently given a CT scan. The radiologist who performed the CT scan, Dr. Hamis Al Sahfi’i, confirmed that the brain scan was normal (for the CT scan results click here). Jawaher had a minor health issue involving fluids in her inner ear. Her physicians insist that she did not suffer from any illness or from any symptoms that might, if combined with tear gas, lead to her death.

There is not, nor could there be, any indication that Abu Rahmah had cancer; in fact, she was in good health. The director of the hospital refutes the claim that she died from a pre-existing condition:

Mohammed Aida, director of the Ramallah health center where Abu Rahmah received her care: “Jawaher Abu Rahmah died from lung failure that was caused by tear gas inhalation, leading to a heart attack. She arrived at the hospital only partly conscious, and then lost consciousness completely.” (Click here for the hospital’s official medical report.)

Mohammed Khatib, a member of Bil’in’s Popular Coordinating Committee: “The army is trying to evade its responsibility for Jawaher’s death with lies and invented narratives that have no basis. They are spreading these lies and invented narratives via the media, which is not bothering to do basic fact checking. Our version is supported by named sources and with medical documents. In a properly functioning society, the army’s version, which has been spread by anonymous sources, would not be considered worthy of publication.”

*Translation by Lisa Goldman, who is responsible for any errors that may have occurred during the transition from the original Hebrew to the English.