Mourning notices for Ali Dawabshe and Shira Banki are plastered across Jerusalem and Tel Aviv, calling on Israeli Jews to to take collective, moral responsibility for the murders.

It has been a week since Palestinian infant Ali Dawabshe was burned alive when his West Bank home was set on fire by Jewish Israelis, and five days since 16-year old Israeli Shira Banki — who was stabbed at the Jerusalem Pride Parade — died of her wounds.

Dawabshe’s parents are still in critical condition in an Israeli hospital, while their house is still in ashes. The Banki family is still sitting shiva (the Jewish seven-day mourning period), while the news cycle has already moved on to Netanyahu’s broken record on the Iran deal, the current heatwave and the GOP debate. But on the streets of West Jerusalem and Tel Aviv, death notices in Hebrew and English have been plastered in recent days to mark the two murders. 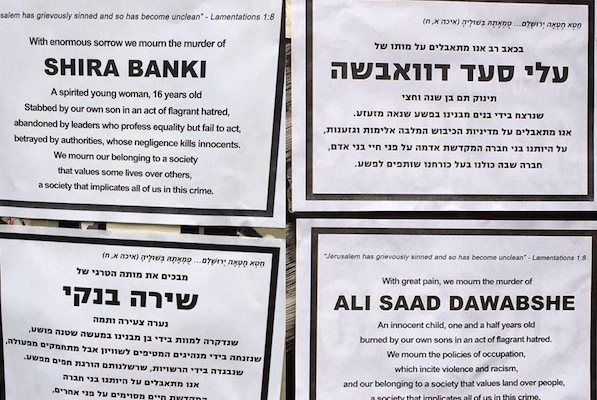 Mourning notices are a common practice in Israel to notify of a death in the community. But these notices, initiated, composed and hung by writer Ilana Sichel and artist Romy Achituv, not only mourn the deaths of these two minors — they also call on Jews in Israel to assume a collective, moral responsibility for them.

An innocent child, one and a half years old, burned by our own sons in an act of flagrant hatred. We mourn the policies of occupation, which incite violence and racism and our belonging to a society that values land over people, a society that implicates all of us in this crime.

A quote from Lamentations 1:8 is printed the top of both notices: “Jerusalem has grievously sinned and so has become uncleaned.”

A spirited young woman, 16 years old, stabbed by our own son in an act of flagrant hatred, abandoned by leaders who profess equality but fail to act, betrayed by authorities, whose negligence kills innocents. We mourn belonging to a society that values some lives over others, a society that implicates all of us in this crime.

Sichel and Achituv have printed and hung nearly 250 of these notices while documented their work in photographs, which they have been spreading on Facebook, Twitter and Instagram.

“When the brutal arson attack and murder of 18-month old Ali Saad Dawabshe became public, I wanted to tether the ripples of shock and horror that went through through the Israeli public for longer than the two-day news and outrage cycle by bringing this attack into the public, visible sphere,” Sichel told +972.

“While we can all agree that burning a baby alive is a bad thing, there’s enormous disagreement about the political basis of the crime. We wanted to appeal to fellow Jews and Israelis and point toward our collective responsibility for, and implications in this heinous act, which is inseparable from the occupation, and from the growing trend of religious fundamentalism.” 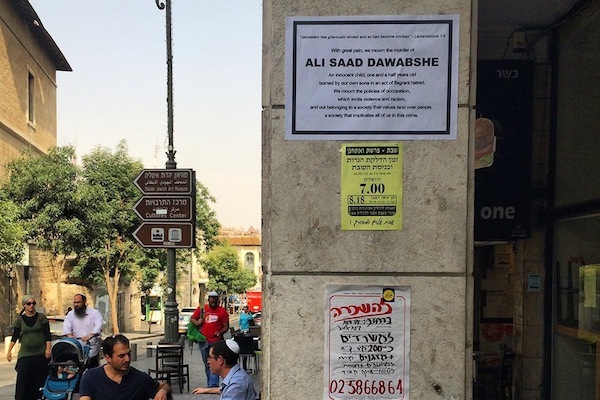 While leaders across the political spectrum in government expressed shock and condemned both the acts, their words rang mostly hollow when considering their policies. In the wake of Ali’s death, the Israeli media quickly moved from showing photos of the infant to images of Palestinians throwing stones, coupled with reports of the expected Palestinian reprisals. Only several thousand Israelis went out into the streets to express their opposition to the violence. Perhaps it was the combination of apathy and extreme heat that kept them at home. 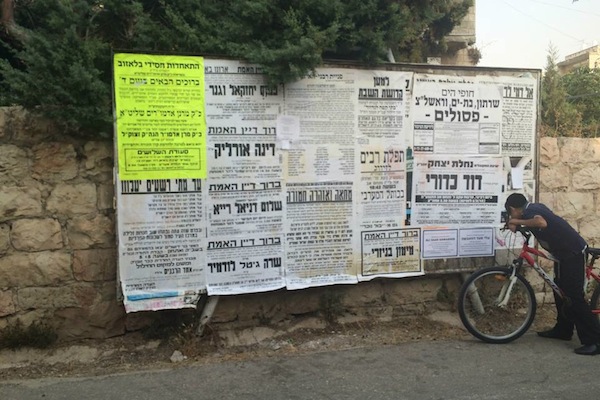 “Though the specific political contexts of Shira Banki’s murder and Ali Saad Dawabshe’s murder differ from each other, they have some deeply distressing commonalities: they are both child victims of the impunity enjoyed by messianic, militant Jewish extremists, and they are both murders which proper law enforcement and sentencing should have prevented,” says Sichel.

I find the notices so powerful and moving because the act of making and publicizing them puts a mirror up to Israelis, and creates a “vista of grief” through public symbols Israelis are accustomed to, but with self-critical messages they don’t normally need to or necessarily want to face. 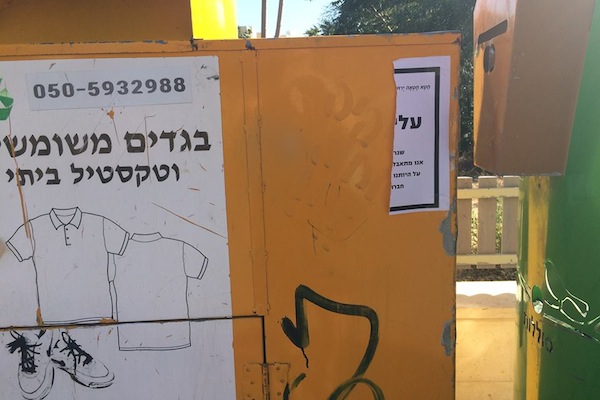 Some of the notices have already been torn down or vandalized — primarily those mourning Ali. Shira’s have mostly stayed in tact. Which just goes to show how much work there is to be done.