On Friday, Channel 2 News aired a story of unique importance, offering a glimpse into the world of the financial difficulties faced by Israeli soldiers. A soldier from the notorious Kfir Brigade, which is often accused of brutal treatment of Palestinians, testified that 9 out of 10 soldiers need financial support, and a Knesset report indicated that thousands of soldiers desert  for financial reasons each year.

I first met these soldiers when I myself was in prison for refusing the draft, about 10 years ago. One after another my cellmates would talk about poverty in their homes, how their parents were ill and could not afford medicine, how their siblings needed school books that the family was unable to pay for. They would reenact the arguments they had with their commanding officers, trying to get their superiors’ consent to allow them some time off so they could work and support their families. None felt bad about their choice to desert when there was no other way to help out back home or to cover their own personal debts. If anything, they detested the army for forcing itself upon them, for not offering them the help they needed and then criminalizing their acts of survival.

Since I was released from prison friends and journalists have often asked me if other soldier-inmates were hostile toward us conscientious objectors. I would always tell them stories of soldiers’ poverty and answer with a question: do you think these soldiers still care enough about the army to be mad at me for refusing? 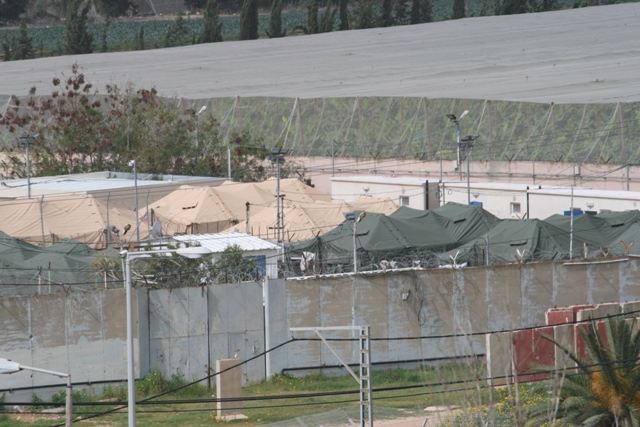 A recent report by the Knesset Research and Information Center indicates that 14,000 soldiers were imprisoned in 2012. More than 70 percent of these soldiers were sentenced for short-term or long-term desertion; according to Channel 2 the majority of desertions were economically motivated. Military service is mandatory in Israel (with several exceptions) and it pays very little: NIS 350 a month, NIS 700 for a combatant. The latter is less than $200 a month, about a seventh of the minimum wage in the labor market; even if you take into consideration the services the army provides, it is still far too little to actually live off.

In the report, Nilly Green, who served as a kind of social worker (mashakit tash) for soldiers, testified that nine of out 10 of rank-and-file soldiers were in need of assistance due to financial difficulties, and that commanding officers would often slip money into their soldiers’ backpacks. Green served in the Kfir Brigade, which operates almost solely in the occupied territories and is notorious for reports of brutality toward Palestinians.

A former commander on a navy ship said that 60 percent of his soldiers required help, and that he would buy them equipment they needed out of his own pocket. This is the same navy that enforces the maritime blockade on Gaza, preventing fishermen from making a decent living.

A former combatant who was forced to desert testified he would take any kind of temporary work, and that he felt like, “you fight in Gaza and Hebron and then you have to go fight for your home.” Another combatant said he could not afford to buy a sandwich when traveling cross-country to his base.

The IDF spokesperson sent Channel 2 the following response: “IDF is the people’s army and as such it mirrors Israeli society, including its social and financial difficulties, and much effort is made to assist soldiers and their welfare. More than NIS 400 million is invested in soldier welfare every year, a figure which has grown in recent years due to the deepening of social gaps and the economic hardships in Israeli society.”

So how do Israel’s youths deal with growing financial hardships in face of compulsory military service? Many find ways to avoid military service altogether. Some, in extreme cases, turn to looting or taking bribes, while others openly refuse service and go to prison due to the state’s violation of its obligation to defend civilians from poverty. Both of these groups are exceptions to the rule.

At its core, the question of payment for military service – especially in the face of rising prices, growing poverty amongst hard working families and an ongoing collapse of the state’s welfare, housing and healthcare systems – is linked to the current crisis in Zionism, one which I referred to as a choice between militarism and solidarity: will we as Israelis fight to reestablish the old racist and militarist social contract in which Jews’ service in the army buys them a certain (and quite minimal, at times) level of social security, or will we choose to form alliances of all poor, working and middle classes – Arab and Jewish alike – to form a new system of solidarity, equality and a fair economy?

Read more:
Solidarity vs. militarism: The Zionist contract and the struggle to define J14