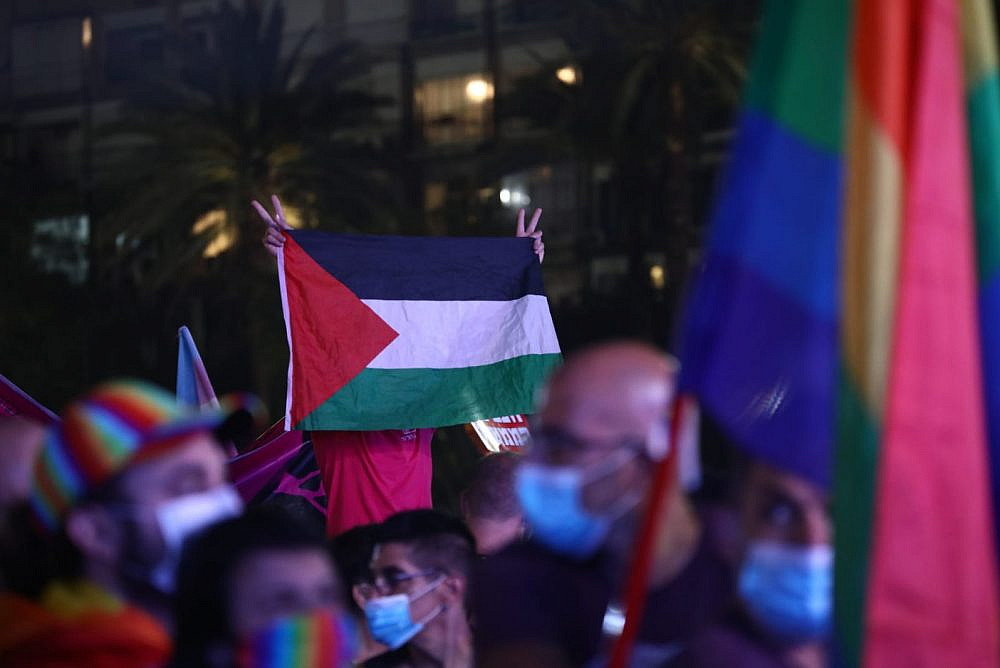 A left-wing Israeli activist was attacked while protesting Israel’s human rights violations against Palestinians at the annual Tel Aviv Pride event on Sunday night. The activist, Sapir Sluzker Amran, a lawyer and Mizrahi feminist who is active in the LGBTQ community, was assaulted after she stepped in to defend a fellow protester who was being attacked for holding up a Palestinian flag.

Sluzker Amran described in a Facebook post how the attacker, who has not yet been named, pulled her hair and slammed her head into the pavement, leaving her with bruises and swelling on her face and body.

The Pride event, attended by around 1,500 and which was one of several to take place across the country on Sunday, featured a contingent of a few dozen demonstrators who protested pinkwashing — the charge that Israel promotes its limited LGBTQ freedoms in order to distract from the occupation — and police brutality. Some held signs mentioning Iyad al-Hallaq, the Palestinian with autism whom Israeli police shot dead in East Jerusalem in late May, while others had placards reading “You can’t pinkwash apartheid,” and “Justice for victims of homophobia.”

At the end of a performance by former Eurovision winner Dana International, one of the protesters raised a Palestinian flag, drawing instant negative reactions.

Note: The above video does not show the assault.

A witness to the attack, who requested to remain anonymous, said that a number of men at the event were trying to pick a fight with a woman holding the Palestinian flag, until Dana Olmert, a renowned Israeli academic and activist in the LGBTQ community, took the flag herself in the hope that they wouldn’t assault a woman.

“People became very agitated after the [Palestinian] flag was raised,” Olmert said. “They began shouting, ‘Take down the flag!’ I thought that if I took it people wouldn’t come any closer, but the second I did, one of the event ushers, who was wearing a yellow vest, grabbed my hand and tried to snatch the flag.”

Sluzker Amran then tried to stop another attendee from taking the flag, at which point he attacked her — as he was holding onto a large rainbow flag — and bashed her head against the ground.

“I shouted at him to stop, I stood as a buffer to try and protect [Olmert] and then he grabbed me and dragged me to the ground,” wrote Sluzker Amran.

As soon as Sluzker Amran tried to stop the attendee from taking the flag, “he threw her forcefully to the ground,” said the anonymous witness. “He was [standing] over her until a few people managed to move him away.”

“I’m in shock that a gay man flying the pride flag, who is supposed to be in the [LGBTQ] struggle with me, hit me like that and didn’t stop even when I screamed at him to leave me alone,” Sluzker Amran wrote. “It just made him keep scratching, kicking, and punching me.” When she went to get medical attention, Sluzker Amran continued, the team treating her thought she had been the victim of a homophobic assault.

Following the attack, Sluzker Amran approached the police, who by then had arrived on the scene, and demanded that they arrest the man who had attacked her. They detained him for a few minutes, after which he continued watching the event performances from the front row. 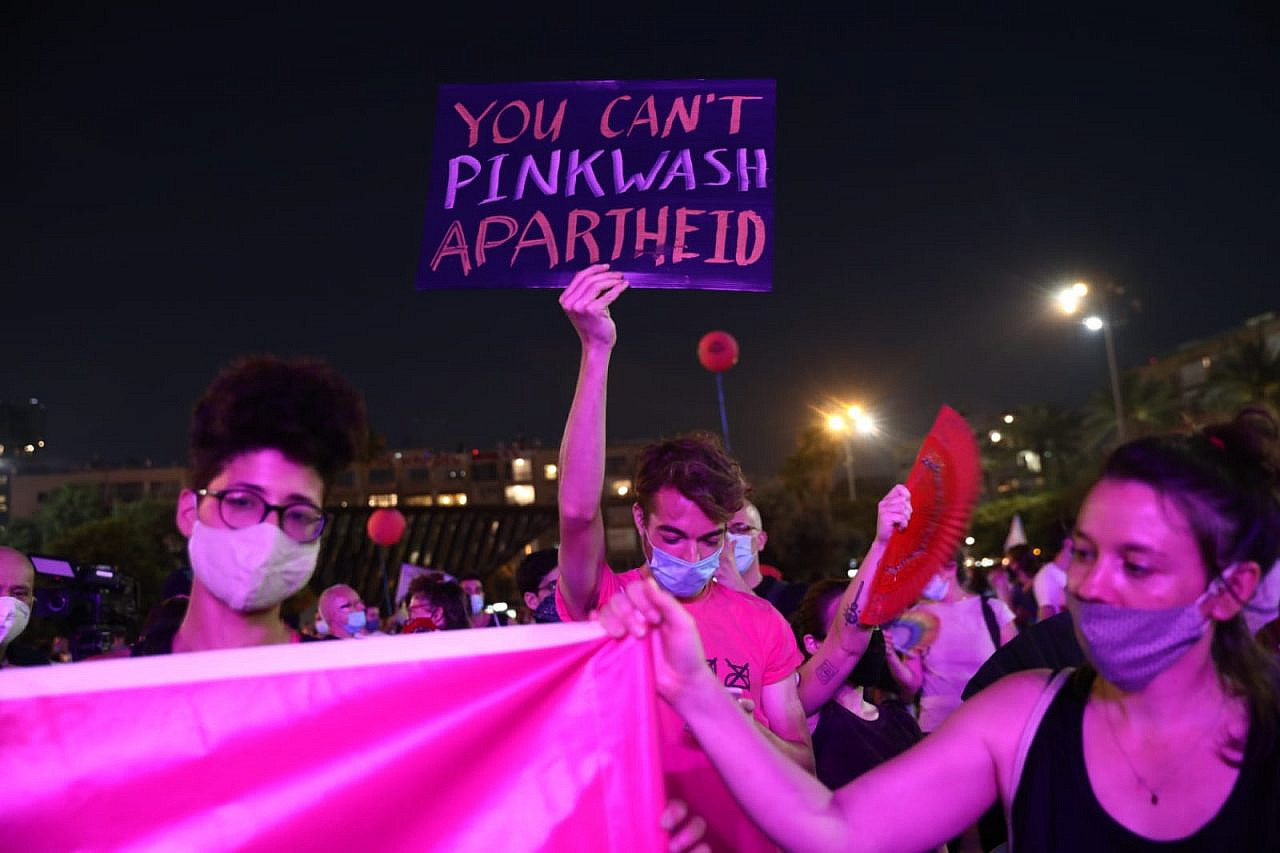 Even as one usher tried to seize the Palestinian flag, a small group of other ushers attempted to stop people from attacking the protesters. One attendee was overheard saying, “Bring the police quickly, take down the flag before there’s a beating.” Another participant was heard telling the protesters, “Go to Ramallah, they’ll screw you there.”

“A Pride parade is inherently a protest,” said Shai Gortler, one of the protesters who raised the flag. “As a gay man, I reject the use of my struggle in order to trample the weaker segments of society. This is why I came here and stood for my right to fly the flag in solidarity.”

Gortler filed a complaint with the police on Monday morning, saying they had denied his right to protest by preventing him from flying the flag.

Olmert struck a similar note, saying that, as in previous years, “the idea was to unite struggles between different oppressed groups. With annexation being planned, the Palestinian issue is taking center stage.” Olmert added that she was pleasantly surprised at the political character of this year’s event, which included speeches by queer Palestinian activist Khader Abu-Seif, and others.

In her Facebook post, Sluzker Amran addressed members of the LGBTQ community and participants in Sunday’s event who were justifying the violence. “I’m reading responses from people in the gay community who support the violent assault we faced,” she wrote, likening the physical assault in response to the Palestinian flag to attacks by right-wing extremists on people waving the rainbow flag.

Sluzker Amran added that for years she has volunteered to represent Pride event organizers across the country who have run into problems with the authorities. “To those at the demonstration yesterday, as well as others in the gay community, does this concern you? Does it make a difference that one of your own was attacked like this simply for being part of a group that was expressing criticism, or will you just say that there are extremists on both sides and carry on with your day?”