A new war would lead to the collapse of an already-debilitated medical infrastructure in Gaza, Palestinian health officials warn. 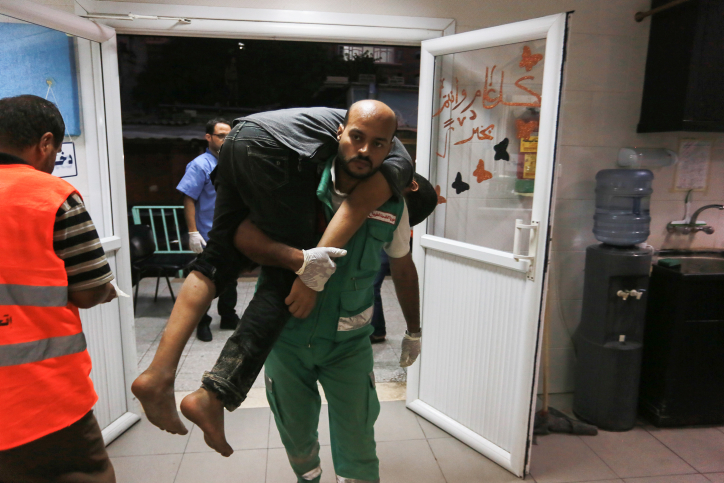 A wounded Palestinian protesters is evacuated and treated at Al-Awda Hospital in Gaza City, after the Israeli navy tried to block a flotilla that set out to break the decade-long blockade with gunfire and tear gas canisters on September 24, 2018. (Abed Rahim Khatib/ Flash90)

GAZA CITY — Fear has been palpable across Gaza for the past couple of days, not only in homes but also in hospitals and medical clinics. For years, health professionals have warned of a looming collapse of medical services. If Tuesday’s nascent, Egyptian-brokered cease-fire doesn’t hold, a war would devastate Gaza’s medical infrastructure, Palestinian health authorities say.

On Monday, Gazans experienced one of the most difficult nights since the war in 2014. After Israeli special forces bungled a covert operation deep inside the strip, the ensuing firefight nearly led to a full-fledged war. The barrage of Israeli airstrikes and Hamas rocket fire into Israel that followed, only made the situation worse.

It’s not just that Gaza’s hospitals and clinics are in bad shape: they are still busy treating people who were wounded in previous rounds of violence, most recently during the Great Return March. Israeli snipers shot thousands of demonstrators, leaving Gaza’s hospitals overwhelmed to the point that hundreds of patients had to make do with treatment in hospital corridors, sometimes on the floor.

Health services in Gaza have been stretched even thinner since early November, when 12 people contracted the swine flu, six of whom ended up dying. There is no vaccine for the virus in Gaza, neither in the Ministry of Health’s stocks nor in private practices, which is emblematic of a far broader problem. 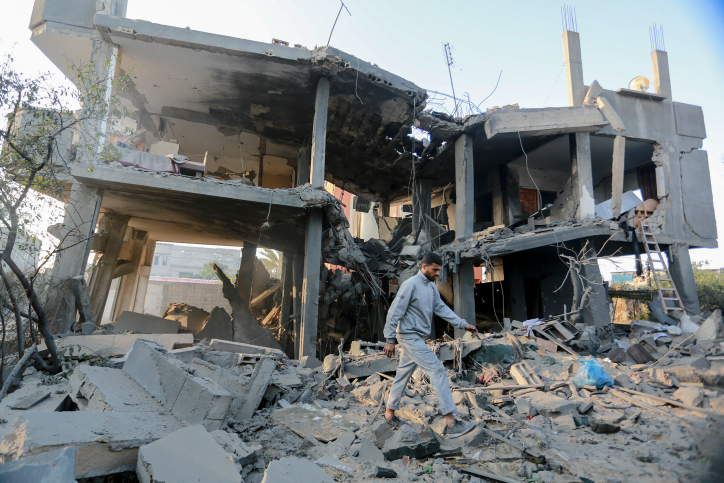 A Palestinian man walks through the wreckage of a building that was damaged by Israeli air strikes in Khan Younis, in the southern Gaza Strip, on November 13, 2018. (Abed Rahim Khatib/Flash90)

The shortfall of medicine and equipment is threatening entire medical care programs, said Maher Shamieh, the general director of primary care at Gaza’s Health Ministry. Of the 143 drugs currently available, Gaza has run out of almost 100, with 16 more medicines expected to be used up in the next month. A war in Gaza will lead to an “uncontrollable medical crisis,” he said.

Israel has imposed a land, air and sea blockade on the densely-populated Gaza Strip since June 2007, when Hamas became the governing authority there. The restriction on movement of people and goods has created a situation where more than 80 percent of Gazans rely on humanitarian assistance, according to the UN. With critical aid to Palestinians at an all-time low, the humanitarian crisis in Gaza has deteriorated even further in the past months.

International organizations such as Doctors Without Borders and International Medical Corps have helped fill some of the demand for medical staff and equipment, but “a new war would be a disaster for Gaza,” said al-Hajj.

Gazans with chronic conditions such as diabetes, high blood pressure, and asthma — who have already been deprived of necessary care for several months at times — are likely to become even more vulnerable should war break out, explained al-Hajj, since their treatment would be delayed even further.

The most difficult medical cases are treated at Al-Shifa Hospital, the largest hospital in the Strip. Unlike medical staff in most countries, a doctor in Gaza might have to conduct eight surgeries in a single day; around 50 surgeries are scheduled every day, five days a week, not including urgent operations, said Dr. Usama Abu Jabal, director of outpatient clinics at the hospital. But thousands more Gazans await operations — and the list of patients is only increasing.

“We do not seek war, for we are already witnessing a health catastrophe in Gaza,” said Abu Jabal.