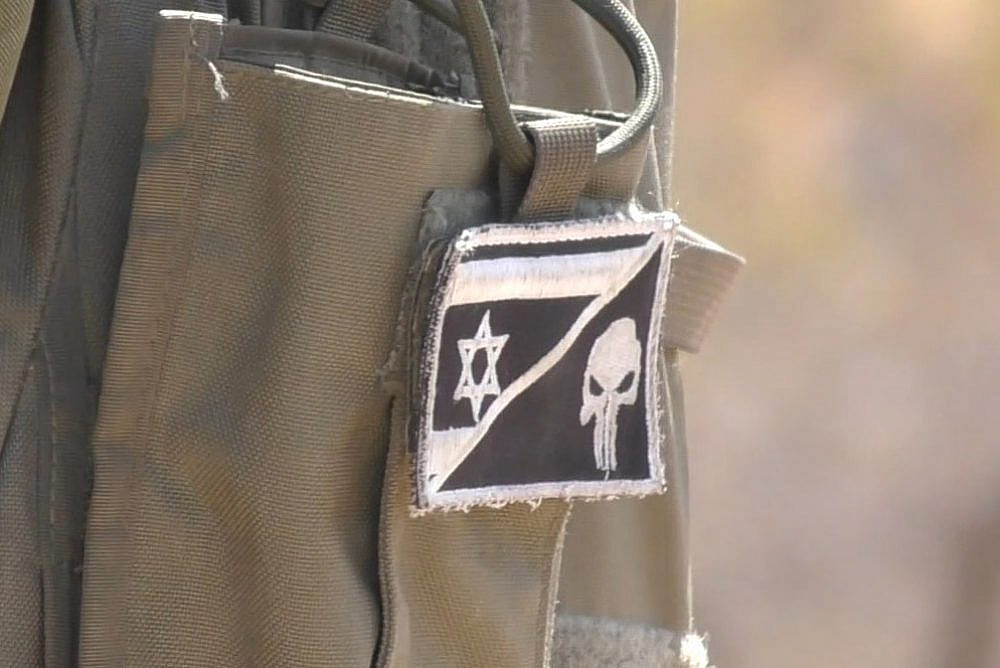 An Israeli soldier carrying a backpack with the Punisher/Star of David insignia near Hebron. (B'Tselem)

A striking symbol closely associated with the far right, the police, and the military in the United States has grown increasingly visible among members of Israel’s security forces in recent years. From soldiers patrolling the occupied West Bank to security guards at a kibbutz in northern Israel, the “Punisher” logo, represented by a skull insignia, has become hard to miss.

The symbol’s origins lie in the famous comic book character of the same name, an anti-hero who first appeared in Marvel’s fictional universe in 1974. In the comics, the Punisher is a military veteran whose family was murdered by the Mafia, leading him to wage a violent campaign to kill the mobsters and other criminal elements. The comic was later adapted into movies as well as a popular series on Netflix. Garth Ennis, one of the writers of the series, described the Punisher as someone who “sees the world in black and white.”

Yet over the past few years, the Punisher logo has become a symbol of military power and deterrence among many U.S. army personnel. It has also become appropriated by American far-right and white supremacist movements, and was visible among some of the people who took part in the Jan. 6 riot at the U.S. Capitol.

The use of this emblem among Israel’s security forces recently gained attention after it was worn by a soldier who attacked Palestinian and Israeli activists at a protest in the South Hebron Hills; the emblem was also spotted on a helmet inside a military vehicle at the same incident. During the violent weeks of May, the symbol was also seen on the vest of an Israeli police officer dressed in civilian clothing in Jaffa.

In August, security guards and residents of Kibbutz Nir David in northern Israel were photographed wearing the Punisher logo alongside the kibbutz’s emblem, as they confronted activists who are fighting for public access to a river under the kibbutz’s control. In another incident that month, an Israeli soldier was seen wearing the logo while the army demolished agricultural terraces and uprooted trees and a vineyard in the Palestinian village of Khalat al-Furn near Hebron.

“The Punisher symbol is part of the frightening image that we [Israelis] are trying to create, of how we want to be seen in the eyes of the person standing before us” says Ori Givati, an Israeli activist with the anti-occupation group Breaking the Silence, who has researched the symbol’s prevalence in Israel. “When we wear the skull on our uniforms, we are sending a clear message: we are not here to protect — we are here to attack, to frighten.” 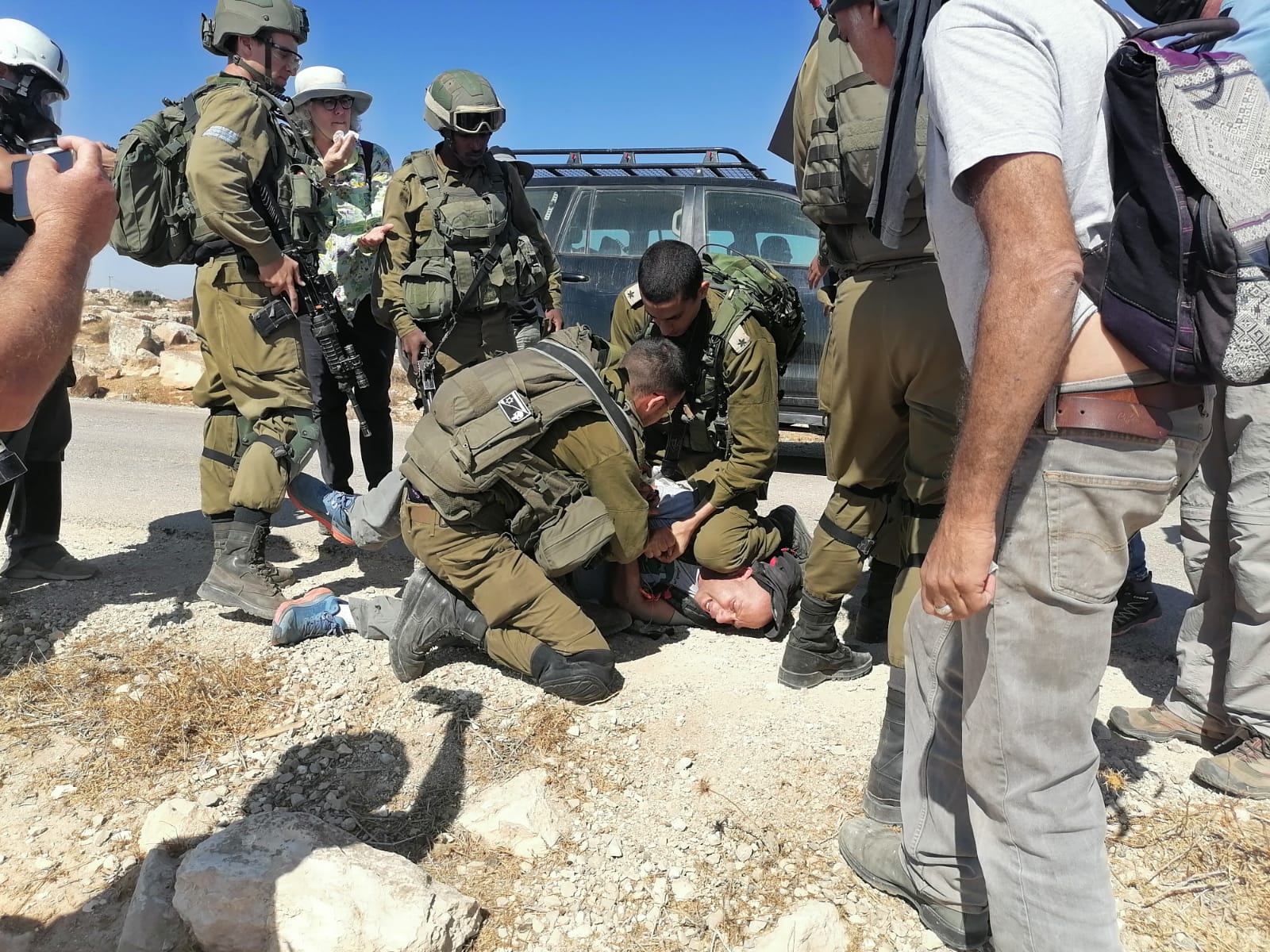 Israeli soldiers arrest an activist during a protest in the South Hebron Hills; one of the soldiers bears a Punisher/Star of David patch.

Although the Israeli army does not officially permit the displaying of the Punisher symbol on its uniforms (it has a specific list of authorized symbols that can be worn), the logo has become a common sight in its combat units.

In its Israeli incarnation, the skull often appears next to or intertwined with the Israeli flag, a combination that can be bought in a variety of online stores in Israel and abroad. Deutsch Tactic, an Israeli store in Haifa that specializes in tactical gear, even offers a free patch to anyone who purchases a shirt from them. According to the store, only a few IDF units actually prohibit the Punisher patch from being worn, and its use is widely accepted in practice.

Nonetheless, an Israeli military source told +972 that the army has begun to recognize the problematic nature of the Punisher logo, and that the army will soon issue new procedures on the matter.

From Iraq to Detroit

The Punisher symbol gained popular momentum among U.S. troops in Iraq and Afghanistan in the early 2000s. Chris Kyle, a sniper in the Navy SEALs who authored the bestselling “American Sniper,” wrote that he adopted the symbol during his time in Iraq.

“He righted wrongs. He killed bad guys. He made wrongdoers fear him,” Kyle wrote. “We spray-painted it on our Hummers and body armor, and our helmets and all our guns. We spray-painted it on every building or wall we could, We wanted people to know, We’re here and we want to fuck with you.” The Navy SEALs tried to claim exclusivity over the emblem, but other units in the U.S. Army and even the Iraqi Army began to use it as well. 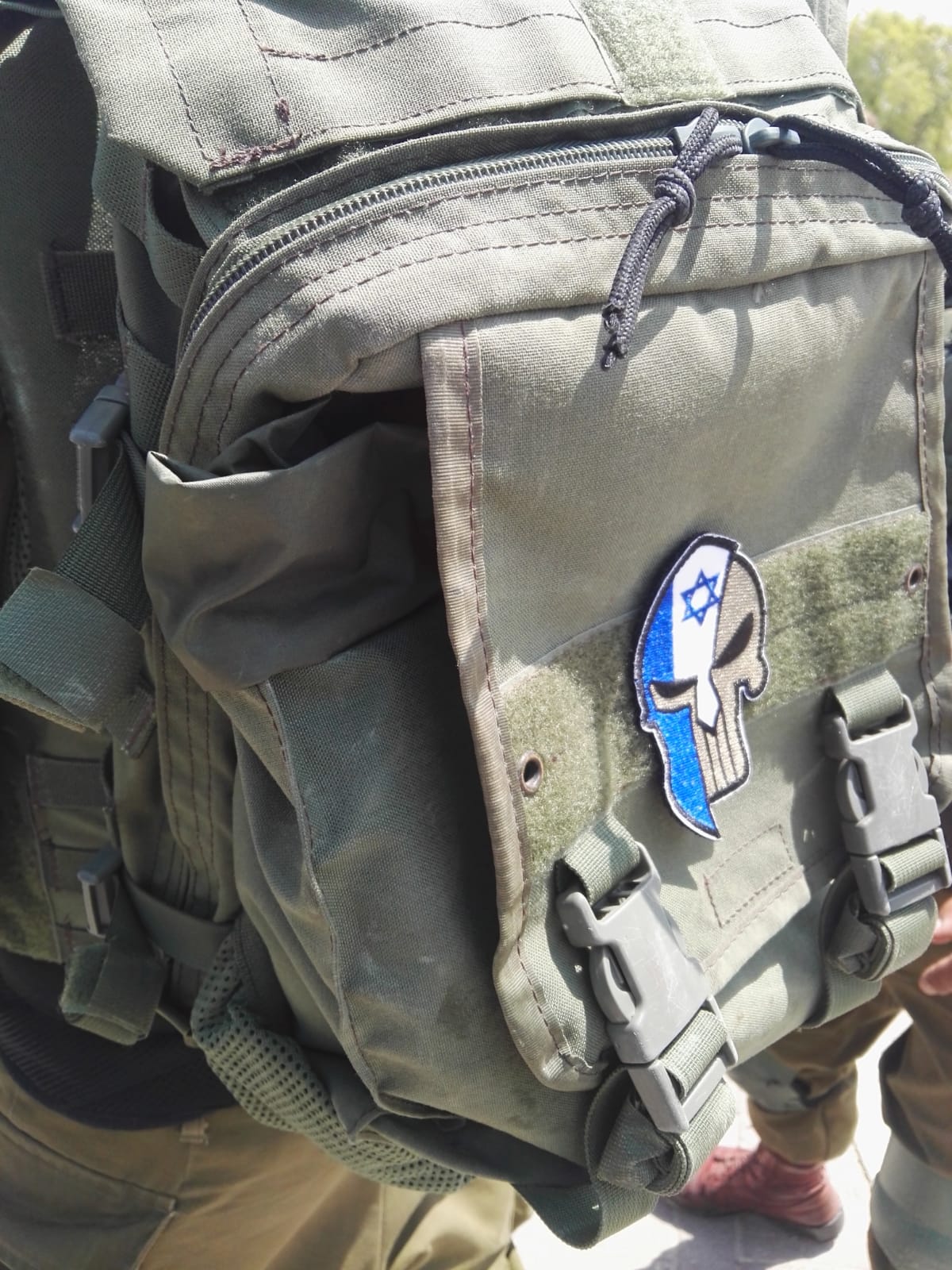 An Israeli soldier carrying a backpack with the Punisher/Israeli Star of David insignia. (Uri Givati)

The symbol was later taken up by police officers and far-right extremists in the United States. In response to the Black Lives Matter movement, which emerged in 2013 after George Zimmerman was acquitted for shooting dead Trayvon Martin in Florida, a pro-law enforcement counter-campaign began in late 2014 called “Blue Lives Matter.” The campaign’s main symbol was a black-and-white American flag with one of the stripes replaced by a blue line, representing the “thin blue line” of law enforcement. This flag also began appearing in combination with the Punisher skull — which may have served as inspiration for Israeli forces imitating the same with a black-and-white rendition of the Israeli flag.

“The Punisher is representative of the failure of law and order to address the concerns of people who feel abandoned by the legal system,” George Conway, the creator of the Punisher comics, told Forbes last year. “It always struck me as stupid and ironic that members of the police are embracing what is fundamentally an outlaw symbol.” In response to the police co-optation of the logo, Conway launched a “Skulls for Justice” campaign selling Punisher t-shirts featuring Black Lives Matter iconography and slogans, in an effort to reclaim the symbol.

Although an active debate is growing in the United States over the meaning and uses of the Punisher symbol, a similar discussion in Israel remains in its infancy.

‘A symbol of death’

Givati, the Breaking the Silence researcher, first saw the symbol on the military vest of a soldier in the Nahal Brigade in occupied Hebron about four years ago. 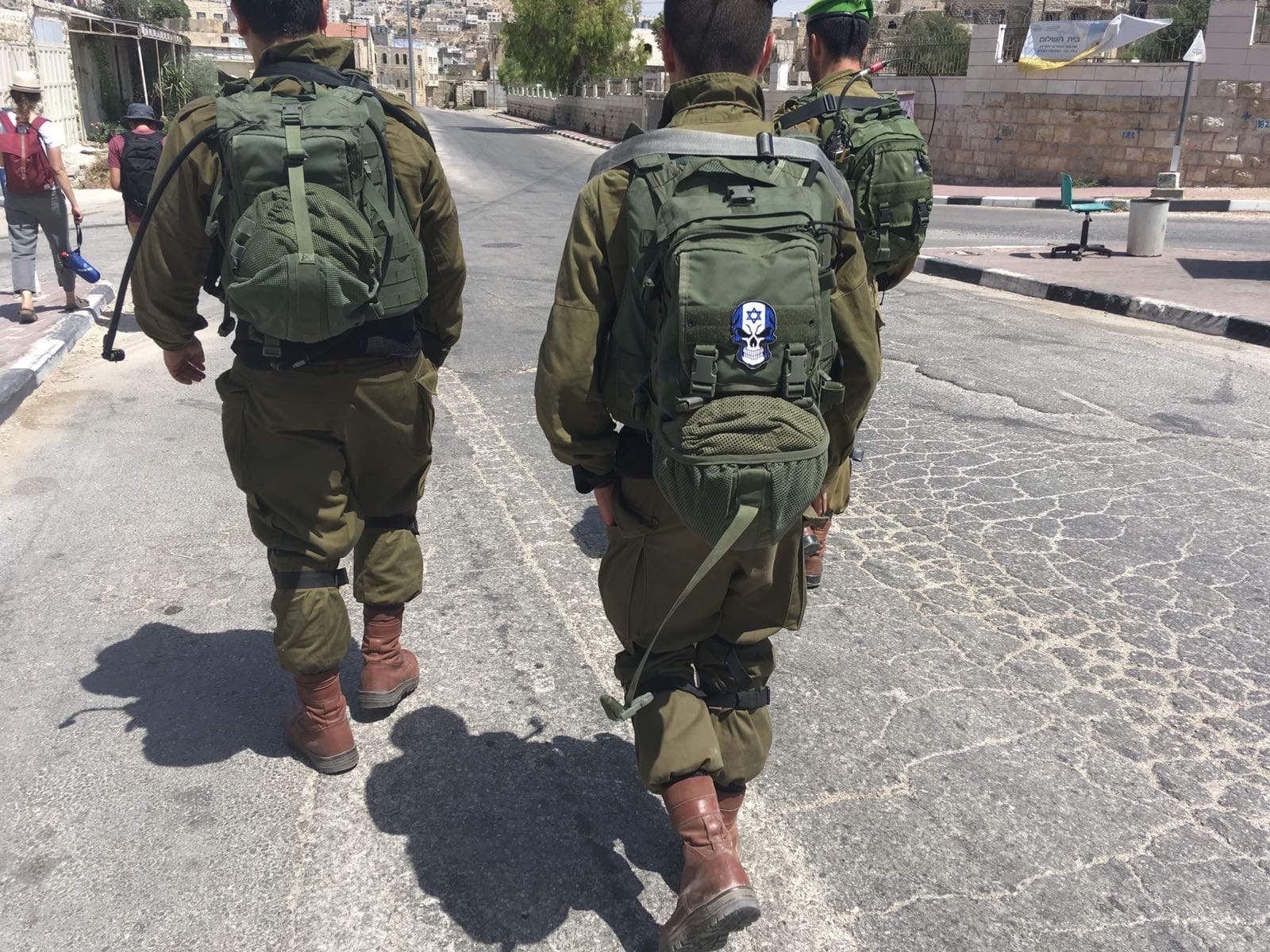 An Israeli soldier carrying a backpack with a Skull/Israeli Star of David insignia. (Ori Givati)

“I saw the skull in different forms over the years, in different colors, adopted by IDF soldiers in various units as well as by Border Police officers,” Givati says. “It caught my attention because it reflected our society’s descent into a culture of force, fear, and militarization.”

Givati suspects that most of the Israelis who have adopted the symbol are not necessarily familiar with the comics, nor do they especially connect with the skull. Its use, rather, is intended to frighten.

“I think there’s a real difference between police overseas using the symbol and Israeli soldiers and police displaying the skull,” he continues. “I don’t think that people here are really interested in what the Punisher specifically represents, or in the series behind it.”

During a tour Givati conducted in Hebron in 2017, Nahal soldiers, one of whom wore a large Punisher patch on his uniform, prevented him from accessing the Tel Rumeida settlement. “I pointed it out to his commander, who was at the scene, and asked how he could allow his troops to patrol with a blue and white skull on their uniform,” he recounts. “[The commander] responded that it was none of his business.”

Givati adds: “I’ve seen those skulls in Hebron, at Damascus Gate [in Jerusalem’s Old City], at Gush Etzion junction, in the South Hebron Hills, and even in Tel Aviv. There’s no secrecy about it, and it’s not just the whim of a few soldiers.” 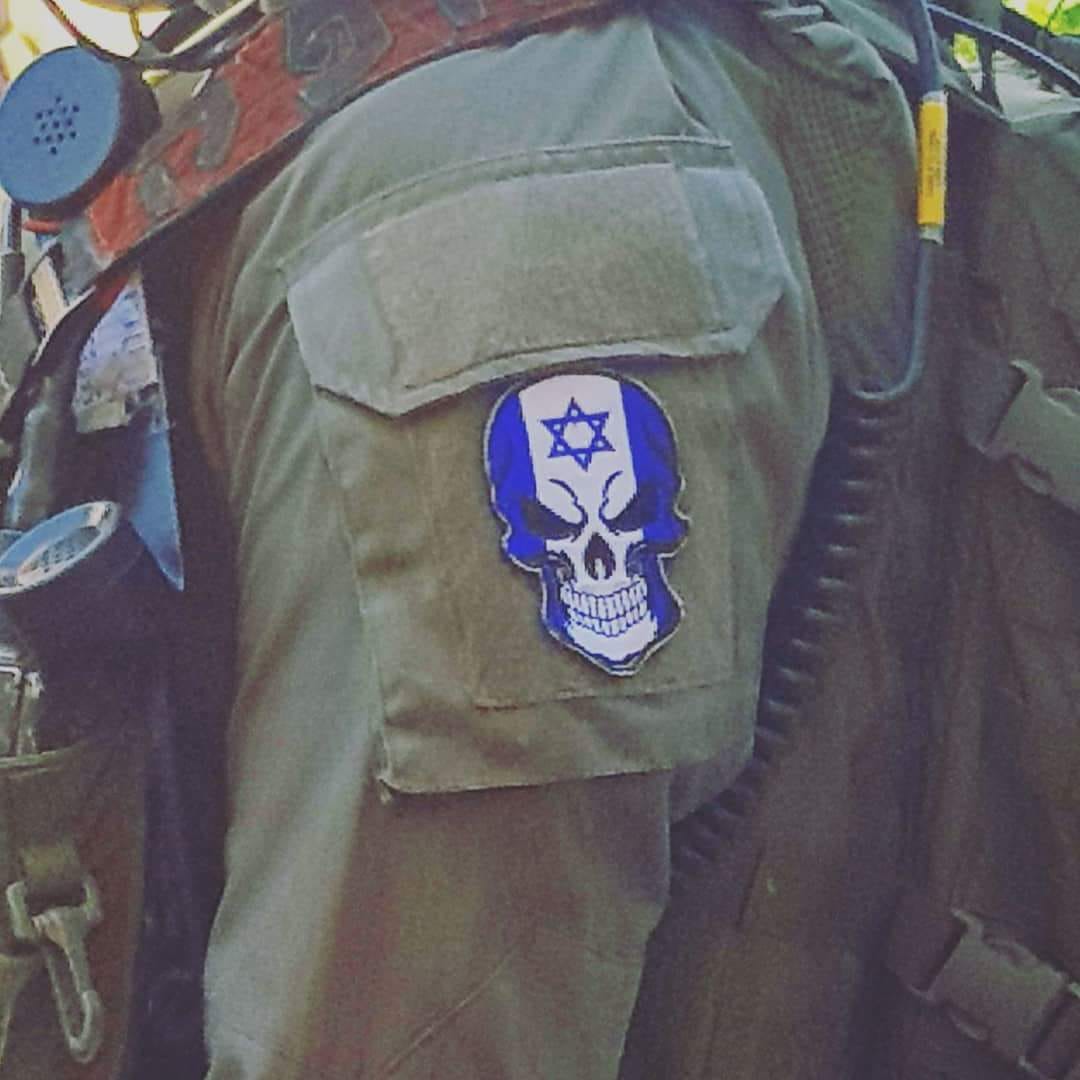 For Givati, the presence of the Punisher logo clearly shows how Israeli soldiers in the West Bank are firmly on the settlers’ side. “The skull with the Star of David, which adorns the uniforms of soldiers and police officers, shows that they are not standing for justice or the victim, but rather are always on the side of [Jewish-Israelis]. Maybe we should actually thank the army and the police for allowing soldiers to use this symbol, [because] maybe it’ll eventually bring us one step closer to acknowledging the reality [here].”

Avner Wishnitzer, a senior lecturer at Tel Aviv University, was arrested last month during an attempt by Israeli left-wing activists to deliver a water tanker to Palestinians in the South Hebron Hills. As he was detained in a military vehicle, he noticed the Punisher symbol on the helmet of one of the soldiers. Another soldier who had helped put down the protest that day was also documented wearing the patch.

“It doesn’t matter what the exact cultural reference is,” Wishnitzer says. “When you use a skull, the immediate context is death — you don’t need too much cultural mediation here. This is what these soldiers want to convey… when they choose a symbol of death, whether they think about it or not, this is quite indicative, especially when the number of [Palestinian] civilians killed in the West Bank is so high.”

In response to queries about the use of the Punisher logo among its units, the IDF Spokesperson told +972: “the IDF permits the wearing of military symbols that have been approved by the [army’s] Symbols Committee. The [Punisher] symbol is not recognized and therefore has not been approved by the army’s Symbols Committee, meaning its wear is prohibited. We are tightening our guidance on the matter, holding discussions with soldiers on the meaning of the illustration on the badge and its removal.”