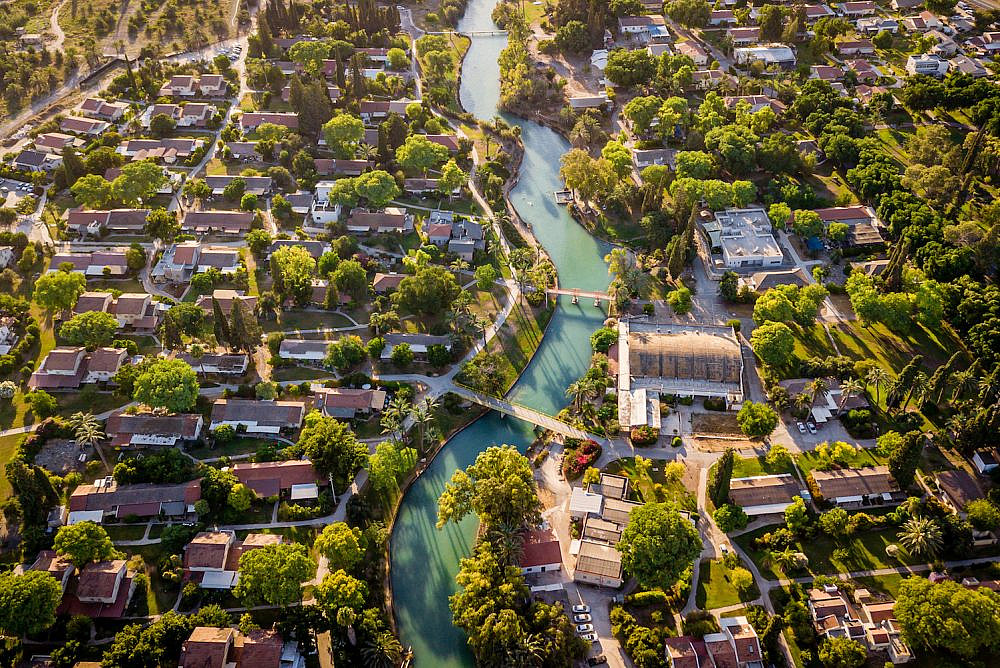 In the hours of the night between June 29 and 30, a small group of Israelis dressed in black shirts, one of them bearing the infamous “Punisher” insignia — a skull symbol that has become appropriated by American far-right movements — attacked a group of young people camping near the Asi River in northern Israel. The attacks included physical assault, verbal threats, throwing trash at the campers’ tent, and blinding them with high-beam lights. The men in black were reportedly either from or sent by the neighboring Kibbutz Nir David to kick out the campers, who are residents of the nearby city of Beit She’an just a few miles away.

The attack was one of the latest jarring episodes in the struggle over the Asi River between the residents of Nir David and Beit She’an. Many of the kibbutz’s residents are Ashkenazi Jews, the European ethnic group that founded the State of Israel and have dominated the political, cultural, and economic elite for much of its history. The residents of Beit She’an are predominantly Mizrahi Jews, who mostly hail from North Africa and who have faced discrimination and racism by the Ashkenazi elite since migrating to Israel after the 1948 war. While the kibbutzim have historically been ideologically associated with liberal Zionism, so-called “development towns” like Beit She’an have largely been viewed as bastions of the Israeli right.

For young Mizrahi activists, the Asi River has become a symbol of the ongoing inequality and discrimination their families face in Israel. The struggle began in September 2019, when a group of young women and men from Beit She’an began demanding the right to access the river, a natural gem whose translucent green water runs straight through Nir David. As is customary of kibbutzim across Israel, Nir David is a “gated community” whose fences block off access to the river for non-kibbutz residents, particularly those from Beit She’an.

The protests intensified in the summer of 2020 when the activists entered the kibbutz grounds, marched on roads that are defined by the state as public areas, photographed the path to the river, and shared their actions on social media. The activists were met with hostility, cursing, and violence from the Nir David residents. Justifying their opposition, the kibbutzniks claimed that the Beit She’an residents were trespassing in their homes; that allowing free passage to the river would cause disturbances to the local residents; and that permitting strangers to walk around the kibbutz homes, many of which are situated near the banks of the river, would harm the community’s fabric of life.

An Israeli wearing the ‘Punisher’ insignia during an attack on campers in Kibbutz Nir David:

What began as an action of a few young people slowly grew into a movement of tens of thousands demanding open access to the natural resource. The dispute even made its way to court, and in late May, the state backed the public’s right to access the river through the kibbutz. To fend off the growing public pressure, the kibbutz announced in June that it would open up a small, fenced-off area near the river designated for up to 250 non-residents at a time. Yet despite what seemed like a gesture of goodwill, the attack by the black shirted vigilantes took place precisely in this designated area.

Fantasies of socialism and equality

While the kibbutz residents may have the right to live as a distinct community without disturbance, they have exhibited a lordly and violent perception of this right, which is resulting in the expropriation of a public space. In effect, they want to continue denying access and freedom of movement for other Israeli citizens, while ignoring the privilege that their identity as kibbutzniks grants them under Zionism.

Nir David’s false narrative of ownership — as if the residents built the river with their own hands, and as if there was nothing in the area before they established the kibbutz — does not stand the test of reality. This narrative is based, among other things, on a story that the kibbutzniks like to tell themselves: that when Nir David was created in 1936, its founders arrived at a desolate place and built their community on their own, and therefore, in 2021, their residents deserve their privacy, peace, and privilege.

In fact, the springs around the Asi were a central area for Palestinians before they were expelled by Zionist forces in 1948; Beit She’an itself was established on the ruins of the Palestinian city of Baysan. Not only was the area inhabited by Palestinians, but the nearby kibbutzim and the Zionist movement would eventually expel the native inhabitants to fulfill the fantasy of socialism and equality. Today, neither the Palestinians who were expelled nor the Mizrahim of Beit She’an are invited to take part in that fantasy. 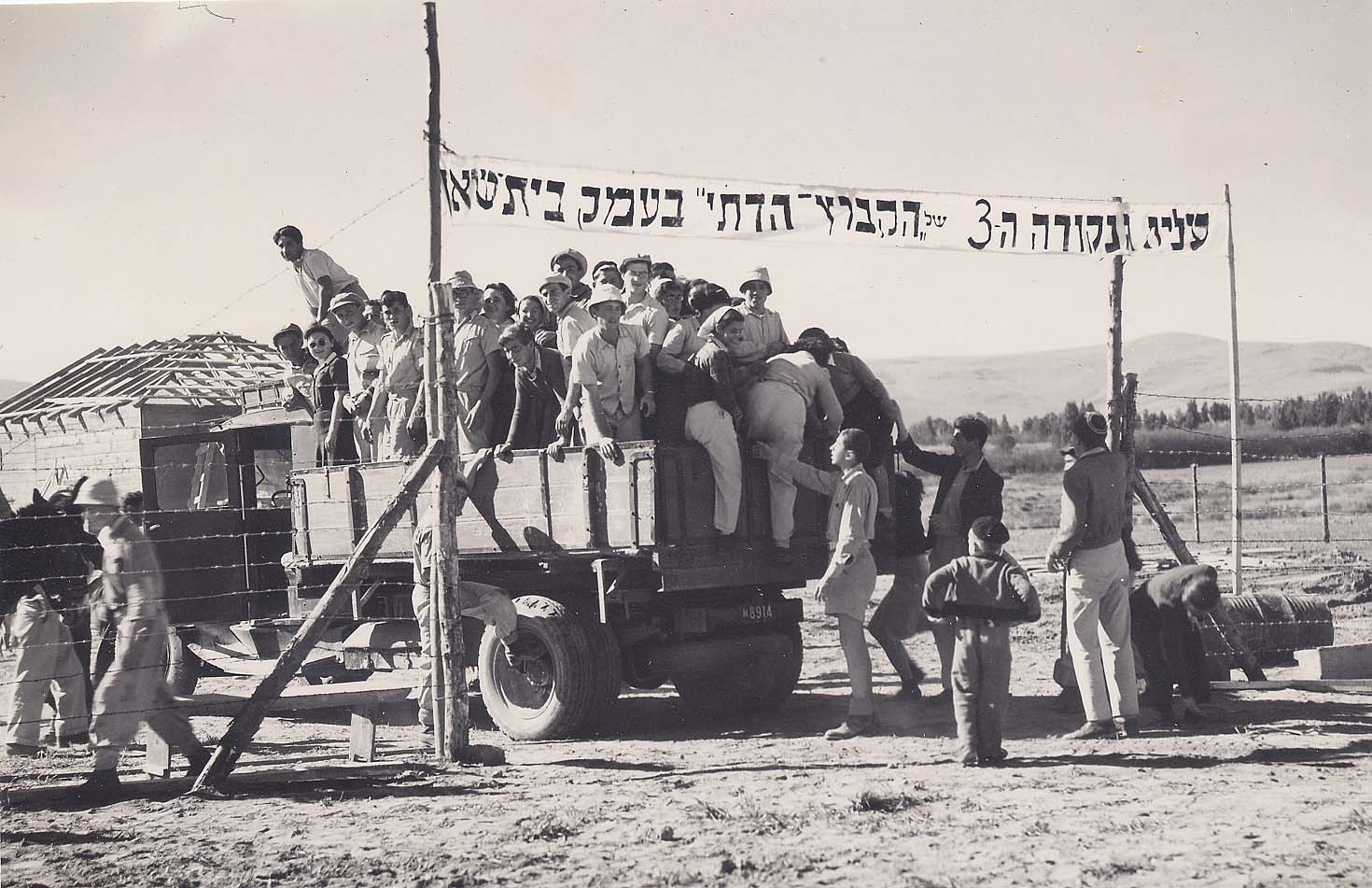 The accusations that the Mizrahim of Beit She’an would spoil the pristine kibbutz are hardly novel. Since the early days of the Zionist movement, Zionist thinkers and leaders have viewed Arab Palestinians and Mizrahim as dirty polluters, while deeming Ashkenazi settlers as righteous stewards of the land. Theodor Herzl, the founding father of political Zionism, described in his writings the “filth” he witnessed on his visit to pre-state Palestine; David Ben-Gurion, Israel’s first prime minister, spoke of the “poor physical condition” of the Jewish families who had come to Israel from Arab countries in the 1950s.

These racist views have persevered in various ways. In September 2020, as part of the weekly demonstrations outside the kibbutz, I arrived at Nir David and stood in front of its yellow gates alongside dozens of other protesters, demanding to be let in to reach the Asi River. On the other side of the fence stood kibbutzniks looking frightened and concerned. Some of them took photos, while a professional photographer hired by the kibbutz documented every protester who shouted or cursed.

After two hours, we were finally able to enter the river from another gate. Throughout the visit, various Nir David residents or people acting on their behalf photographed us, expressing shock and alarm at our presence. Disgusted by the people entering the river, the hired photographer kept walking among us and taking photos, which he would later edit together into a video on the Nir David website, presenting the Beit She’an residents as animals with horrendous behaviors and who leave terrible messes behind them.

Coexistence as an existential threat

The attack in June by the black shirts, especially the one with the far-rightist Punisher patch, as well as the racist portrayal of the Mizrahi activists, should have provoked much greater shock among the Israeli public. Instead, we have seen complete silence — including from the Zionist left, for whom the Asi River presumably have been a major cause.

The truth, however, is that the Zionist left has never been a real partner in the struggle for redistributive justice nor for the demands of equality of Mizrahi Jews in Israel. Instead of standing by the young women and men from Beit She’an, the two Zionist left parties in the Knesset — Meretz and Labor — have been absent from the conversation. After all, many of their voters are members of kibbutzim and moshavim who still hold sway in the parties.

More than anything, however, the attacks on the Beit She’an youth weaken Nir David’s claim that the residents only care about their security, and that they fear harm to the kibbutz’s way of life. Rather, the violence reveals that the issue at hand is not merely the kibbutz’s unwillingness to share space with people who are not like them, but that, in the kibbutniks’ eyes, the very idea of coexistence with these “outsiders” is an existential threat.