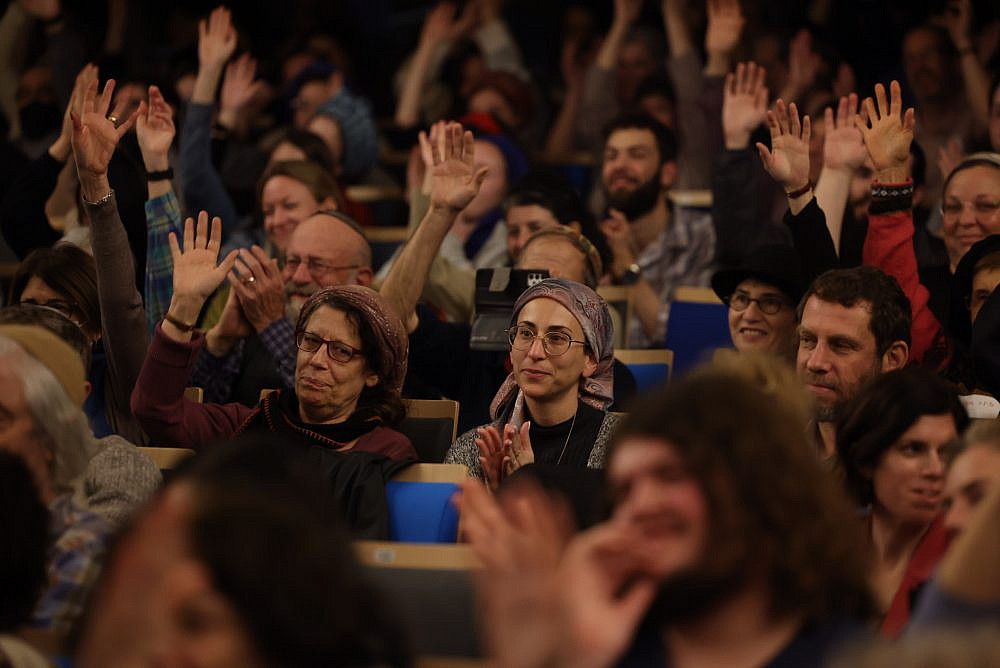 Hundreds of people crammed through the entrance of the first ever “Faithful Left Conference” in Jerusalem’s Hechal Shlomo building on Monday night, so much so that it was hard to move. I asked someone standing next to me, who was wearing a kippah, whether everyone who arrived was truly there for the conference. “It’s madness,” he said as he looked around, smiling. “Who would have believed that there were so many religious leftists in this city.”

About 600 Jews from different backgrounds and denominations — from Haredim (ultra-Orthodox) to national-religious to Masortim (traditional, not strictly observant Jews), and even a few secular Israelis — filled the hall for the event. Over the next few hours, speakers and participants dove deep into questions surrounding the occupation, feminism, religion and state, fighting poverty, and distributive justice. A major goal, according to the independent activists who organized it, was to help establish a wide-ranging, left-wing religious community that could lay the groundwork for political and social action on the ground.

The evening opened with a talk from the conference coordinator, Brit Yakobi, who serves as the Director of Religious Freedom and Gender at Shatil, an Israeli social justice organization. Turning to the audience, she asked them to “[r]aise your hand if you’ve ever studied at a yeshiva or midrasha [a religious school for women].” A third of the crowd did so. “And who here feels that there is a gap between the home they grew up in, and their positions today?” The crowd began to laugh, with half now raising their hands. Then Yacobi asked who feels that the current government speaks in their name, but does not represent them; almost every single hand went up.

“People are feeling a sense of crisis,” explained Mikhael Manekin, one of the organizers and a longtime anti-occupation activist. “I feel it among many people, a sense of loneliness or a lack of identification. On the one hand, if you are religious, Haredi, or Masorti, the political leadership that represents you in the Knesset has become ultra-extreme. On the other hand, we’re seeing a tribalistic secularism that does not allow for making connections [between groups]. Anyone who falls in between [these camps] is in the process of searching.” 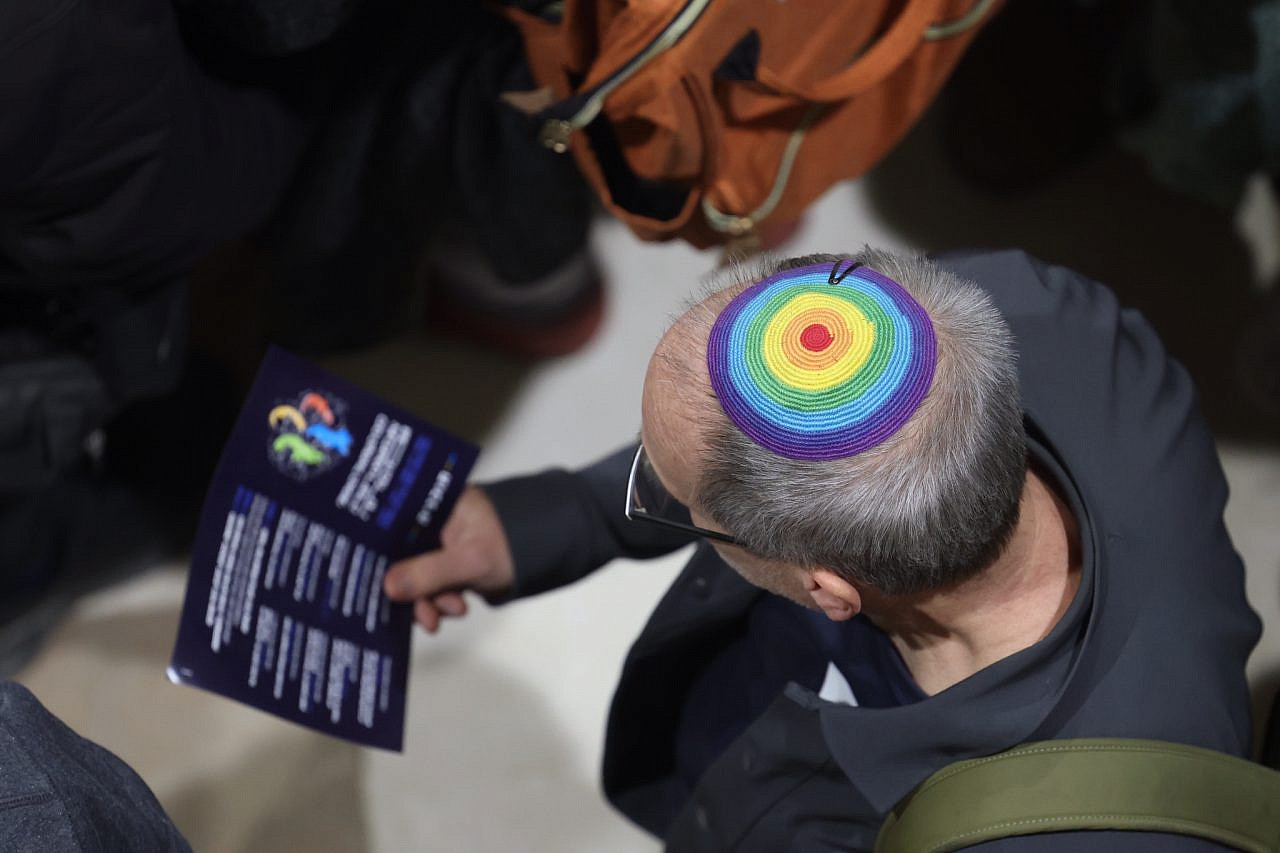 Manekin said that the prevailing identification in Israel between religion and the right is unusual compared to other places in the world. “If you look at Black churches in the United States, or liberation theology in South Africa and South America — there is a very deep identification between the aspiration for equality and religiosity. It also exists in Muslim, Christian, and Buddhist movements, and there are also many Jewish theologies that shy away from force and belligerence. These things developed differently for all sorts of reasons in Israel.”

Michal Chernovsky, who leads various struggles in the realm of Haredi education, said that it was her children and their educational future that motivated her to organize the conference. “We are a really small minority in our communities, certainly the ones who speak up,” she said, “It’s difficult, particularly in children’s educational institutions. It worries me how they will grow up and what they will believe. There is now a perception that if you are religious, then you are right wing, and if you’re even more religious, then you’ll probably vote for Ben Gvir.”

Chernovsky continued: “Recently there is a kind of feeling, in the State of Israel in general, that … the occupation will continue forever, that the Palestinians should only be oppressed more and more, and that everything we do is fine. When you try to crack that a little, you run into a wall. I think about young people. What do they hear? They have no choice.”

‘This is not the way of the Torah’

The event included rabbis and social activists who work on various issues from the point of view of the “faithful left” — a new term that quickly turned into the event’s signifier among the participants. Rabbi Adina Bar-Shalom — the eldest daughter of Rabbi Ovadia Yosef, the late spiritual leader of the Sephardic ultra-Orthodox party Shas — described in her speech one of her father’s quintessential halachic rulings, that permitted giving up land in exchange for peace. “Contrary to what many claimed, my father never changed his position,” she emphasized. “I remember the fierce attacks [from right wingers], the violent demonstrations in front of his house.

“The face of Haredi society, to which I belong, is changing,” Bar-Shalom continued. “Extreme statements, support for discriminatory policies, and racism have reared their heads and turned into a common sight. An outside observer may think that this is the way of the world. The long years of conflict between us and the Palestinians, the terrible attacks that do not cease and that undermine our peace, as well as the desperation for progress to resolve the conflict, have led the public to right-wing extremism, upon which populist politicians who feed on hatred thrive. 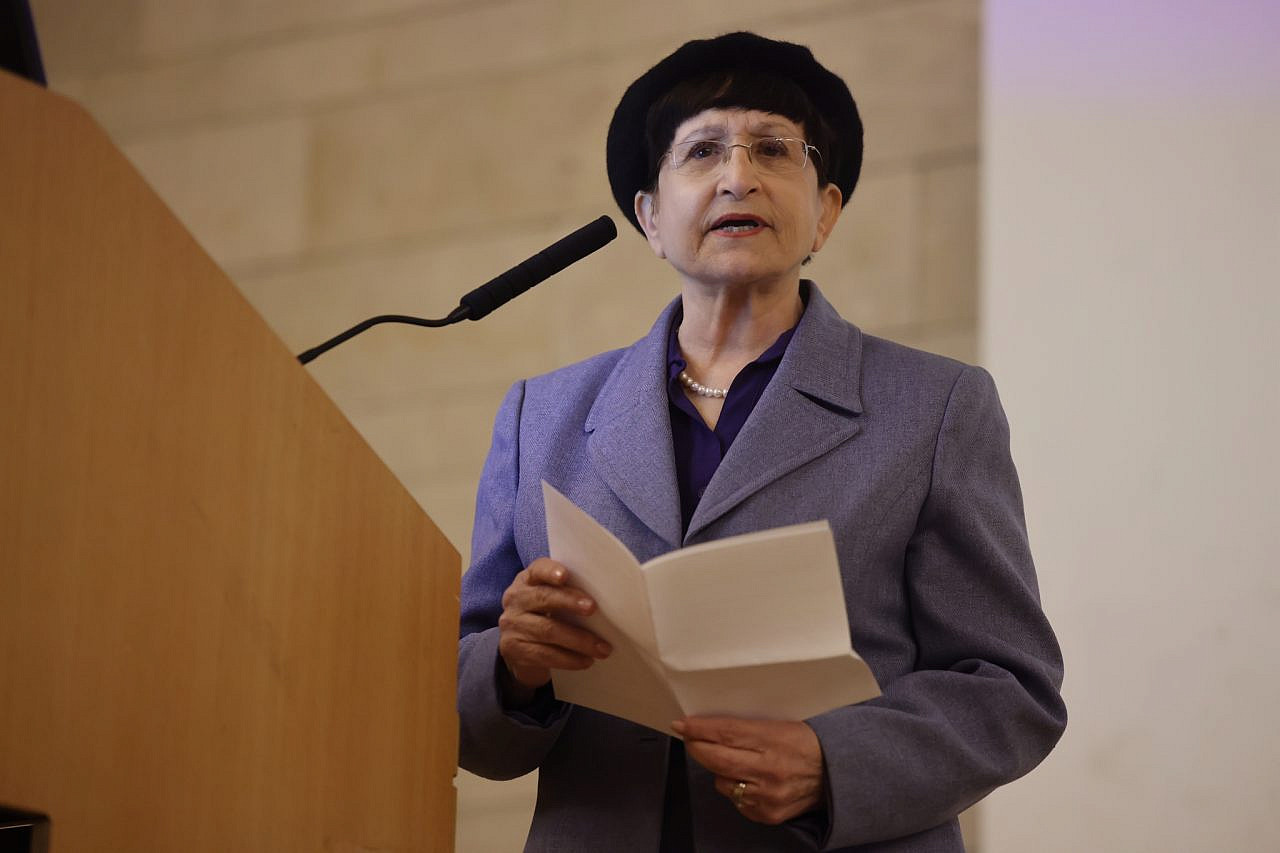 This theme was repeated by almost all the speakers at the conference: anger at right-wing politicians’ appropriation of Judaism and the Torah to promote racism and violence in a way that, according to them, is contrary to the values of the Jewish religion itself.

Nitzan Caspi Shiloni, a lawyer and religious-feminist activist with the Center for Women’s Justice, sharply criticized Justice Minister Yariv Levin’s judicial reforms that would weaken the Supreme Court. She described how these moves would harm religious women whose husbands deny them a divorce, and whom she represents in rabbinical courts. She told the audience that just that morning she had appeared before the High Court, and it was only thanks to the intervention of the justices that a woman whose divorce had been delayed for three years by a rabbinical court finally received her wish.

“Under Levin’s plan, the legal system, which has protected women for years, will no longer come to our aid. Who can such a woman turn to?” Caspi Shiloni said. According to her, the government’s plan to strengthen the rabbinical courts will also be destructive for women and their ability to practice their religion freely. “Since its founding, the State of Israel has tied the Torah, the Jewish spirit, to the religious establishment,” she said, “My daughter can read the Torah at a Bat Mitzvah in a neighborhood synagogue, but not at the Western Wall.”

‘This thing will eventually create a better world’

Leah Shakdiel, a 71-year-old Orthodox rabbi, anti-occupation activist, and scholar came to the conference from her home in the southern city of Yeruham. She began her speech by recalling the late-19th-century Dreyfus Affair and how it split French society in two, serving as a moral litmus test. “There are moments of black and white. There is no center. Either we are part of the problem, or the solution. And I claim that our litmus test today, of the Jewish state, is the attitude toward the Palestinians. There is no center. It is black and white,” she said to thunderous applause from the audience.

“The Land of Israel is our homeland? Of course. But we are not alone here. There is another people here. Half of the people living between the River Jordan and the [Mediterranean] Sea are Palestinians, not Jews … Security for the Jews? Of course. But this security will not be achieved by trampling the Palestinian people by force, but rather through a peaceful coexistence.

“The right to live in a Jewish state also means responsibility for the sovereignty of human rights — for all those under our rule,” Shakdiel added, “and this includes the Palestinian people who are citizens of Israel, and this also includes the Palestinians who have been struggling for decades under our apartheid rule that we are actively maintaining, while systematically turning our backs on opportunities for peace.” 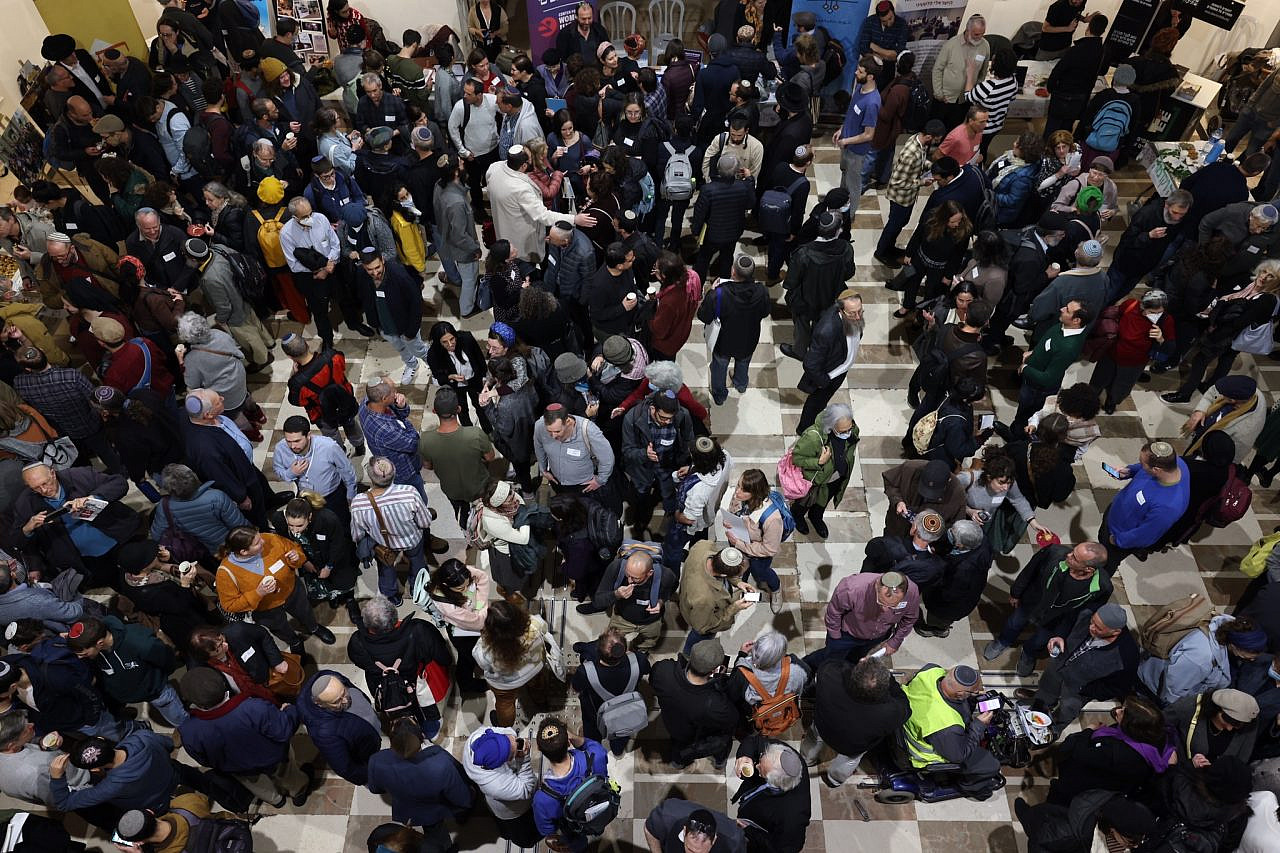 Avi-ram Tzoreff, another resident of Yeruham, offered a different position. In his eyes, the potential of the religious left is not in making the Jewish state more just or less of an occupier — which was the position of most of the speakers at the conference — but rather in offering a fundamentally different political framework through which to understand Israel-Palestine. According to him, it is possible to anchor Jewish existence in the country through religion rather than the state, in a way that will provide Jews collective protection, but will not come at the expense of the Palestinians and their national rights between the river and the sea.

The event was bookended with discussion groups on topics such as Judaism and the LGBTQ community, the role of the media and the limits of freedom of expression, the eradication of poverty in Israeli society, and even a group for religious leftist teenagers.

The group that discussed the struggle against the occupation included around 60 people who were divided into smaller sub-groups. In one of them, participants talked about how the religious left has an advantage because it can “understand the narratives of both sides,” while saying that we need a religious countermovement to the settler movement.

Another discussion group focused on the difficulty of identifying as leftists inside religious frameworks, with one person admitting that he was too afraid to tell his wife’s parents that he was a leftist. Another participant reassured him: “I have been living in a religious community for 50 years, where I am considered the leftist,” he said. “I realized that the clearer and sharper you are, the more you will be respected. They will understand that this is your truth. I believe that there are a lot of religious leftists who are made to feel scared. I say to you — come out of the closet.”

One of the unanswered questions that arose in the discussion was about the relationship between the left and faith, or between politics and religion. “Perhaps it can be said that we are people who believe in democracy and morality, and at the same time, we are also Jewish, without any binding connection between the two,” said one participant.

One possible answer to the question was offered by a participant from “Sons of Abraham,” a new movement made up of religious left-wing activists, who go to Hebron twice a month and work with Palestinians who lead protests against the occupation and apartheid. During one of their recent visits, the activists worked together with local residents to repair agricultural terraces that settlers had destroyed. Shortly after they left, the terraces were destroyed once again.

The destruction of the terraces led the group — whose members devote their time to activism, spirituality, and studying Torah — to come up with a potential definition for religious action, the activist shared. “It’s when you do something — the same thing — over and over again, with a deeply-held belief that this very thing will eventually create a better world, regardless of the immediate result itself.”