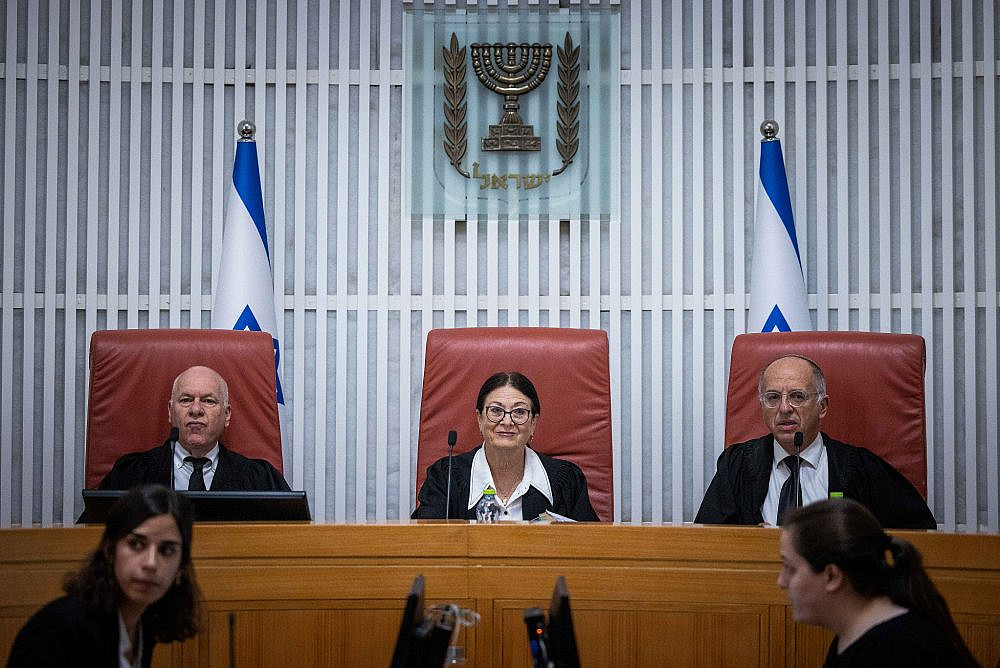 Supreme Court Chief Justice Esther Hayut and other justices arrive for a court hearing on the election committee's decision to disqualify Balad from running in the Knesset election, Jerusalem, October 6, 2022. (Yonatan Sindel/Flash90)

In early January, the new Israeli Justice Minister Yariv Levin announced a multi-part plan on behalf of Benjamin Netanyahu’s government for what he terms a “reform” of the legal system. The proposal envisions a drastic reduction of the courts’ ability to conduct judicial review of both legislation and governmental actions; changing the composition of the national committee that selects judges so as to give an overwhelming say to coalition representatives; and transforming the role of government legal advisors from public servants representing the law to consultants serving at officials’ will.

Despite the legal and bureaucratic complexity of the proposed changes, much of the Israeli public has quickly caught on to what is at stake. In Israel, there is no form of bicameralism, federalism, presidential system, supra-national review, or other common mechanisms to regulate and restrain power; here, that authority has primarily lain with the judiciary.

As such, Levin’s plan is not a reform of Israel’s legal system, but rather a plan to shatter its independence — a process that will pave the way for unbridled corruption, infringement of individual rights, and harm to the public interest. By releasing the Israeli executive and legislative branches from the principal institutional constraints on them, the coalition clearly seems to be taking the country down the road of authoritarianism.

The coalition agreements’ pledge to enact new exceptions to anti-discrimination laws based on religious grounds, as well as to propose other legislation to further religious Jewish values, did nothing to reassure those portions of the public concerned with gender, the LGBTQ community, minority rights, and secularism. Thus, tens of thousands of Israelis have crowded the streets of Tel Aviv and other cities for three weekends to protest the far-right government, with even more expected to turn out for future demonstrations.

Israeli legal scholars and social scientists, including Palestinian citizens of Israel, have been vocal in denouncing the legal reform and arguing that it will enable an unrestrained power grab by the governing coalition. Many have conducted teach-in sessions on college campuses, in community centers, and in homes around the country, and have written in or spoken to the media, among other forms of activism. 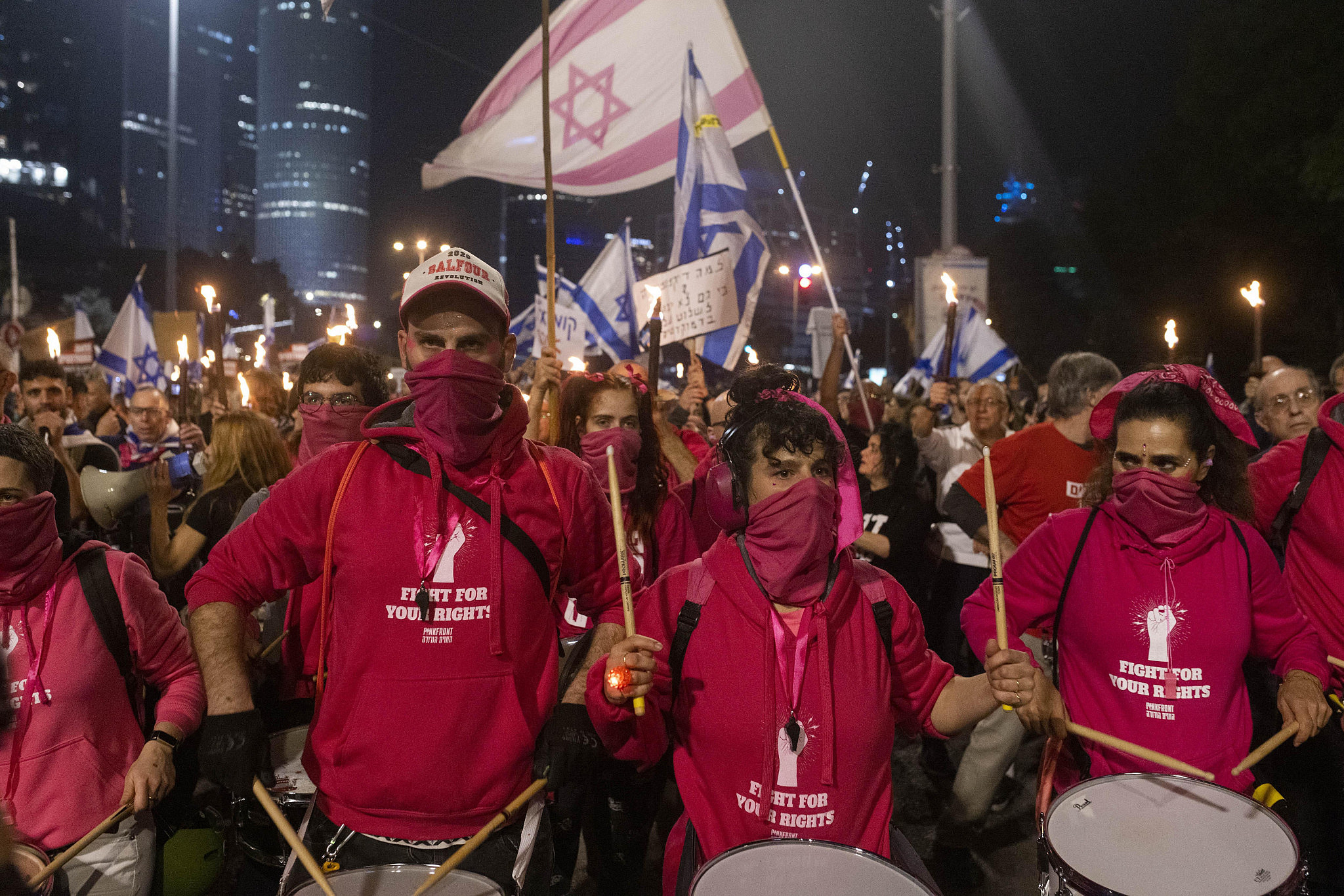 However, for some leftist, critical scholars, participation in the emerging social movement raises difficult questions. Many have spent their careers denouncing the Israeli Supreme Court, quite rightly, for legitimizing the occupation and failing to sufficiently protect the rights of Palestinians on both sides of the Green Line. Scholars have pointed to government legal advisors as key enablers of prolonged military rule, war crimes, and other grave wrongs done to vulnerable populations, including African asylum seekers.

Thus, for those convinced that a regime of ethnic domination reigns between the Jordan River and the Mediterranean Sea, “Israeli democracy” has been little more than a fiction, or at best a democracy enjoyed fully by one ethnic group only. So how can these scholars participate in demonstrations where the overwhelming symbol of protest is the Israeli flag, and at which the main slogans are calling for the “defense of democracy” and of the Supreme Court?

Despite our view that Israel has established a form of apartheid in this part of the world, we nonetheless see the threat of the coalition’s proposed legal reforms as exceptionally grave, and the struggle against it as extremely urgent — for the safety of both Palestinians and Jewish Israelis. By taking down legal barriers, the margin for deeper governmental corruption, more blatant discrimination in Israel, and more violent abuses in the occupied territories is made much wider. Whether we label Israel as a democracy, ethnocracy, or apartheid regime, now is the time to protect those spheres of freedom and legality that, however limited, provide some protection to human rights and retain some space for political action.

Unlike most Jewish citizens, who see Israel as a once-flourishing democracy, we cannot ignore the long-lasting occupation of the Palestinian territories, nor the fact that Palestinians residing between the river and the sea live either as “subjects“ under Israeli military regime or as second-class citizens. And yet, following much political science scholarship, we must understand democracy and authoritarianism as operating on a spectrum. Many regimes are hybrid, neither full democracies nor autocracies. Israel is one such case: among its democratic aspects, it generally provides individuals of any ethnic background the right to bring a petition before the courts to invalidate discriminatory legislation or actions, and thus restrain to some extent the powers of the Israeli-Jewish political majority. 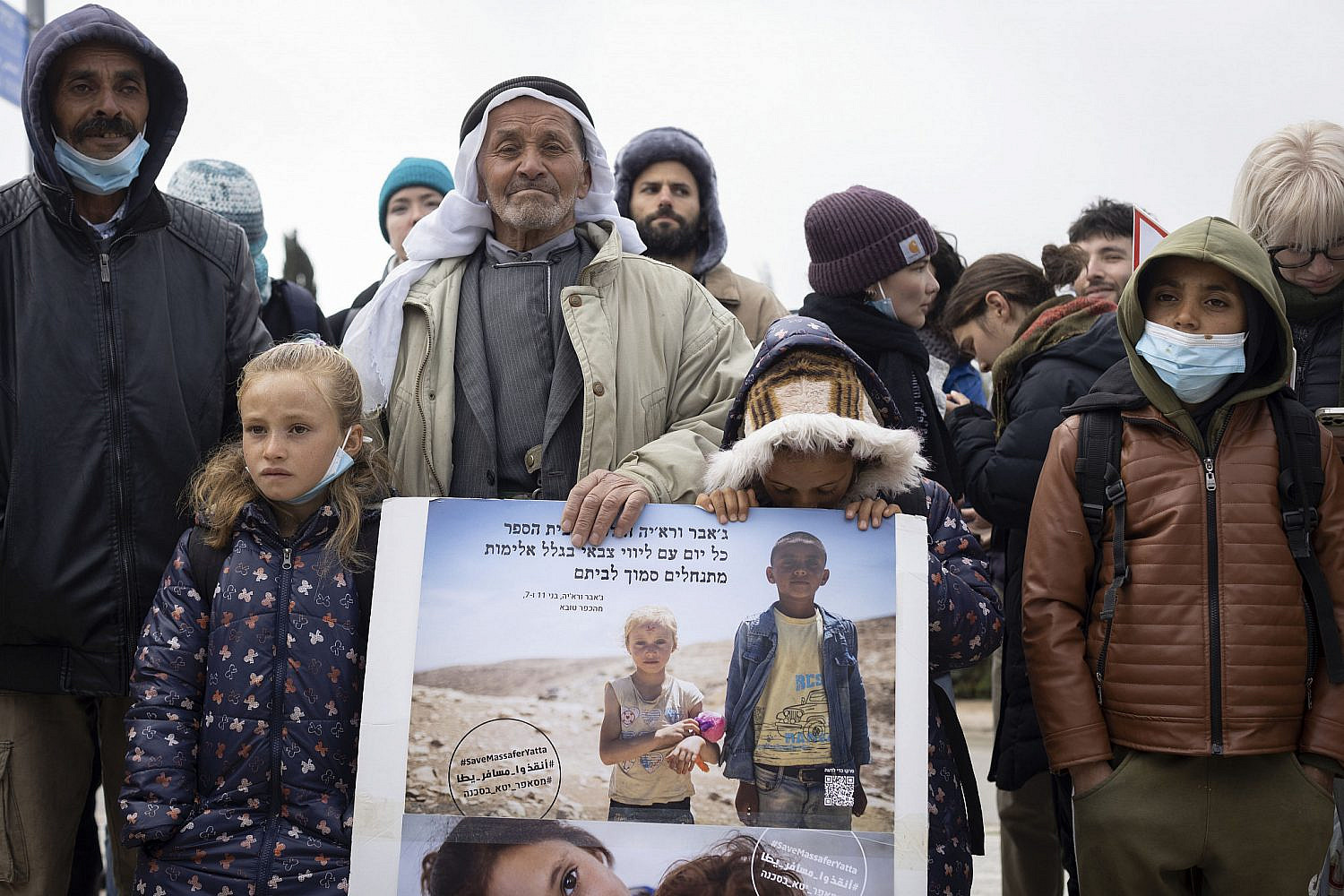 Palestinian families and supporters protest in front of the Israeli Supreme Court in Jerusalem during the final hearing regarding Israel’s plans to expel over 1,000 residents living in Masafer Yatta in the southern West Bank, March 15, 2022. (Oren Ziv/Activestills)

We do not believe that the occupation, expansion of settlements, or Jewish superiority will be ended through litigation in Israeli courts. We know, too, that Palestinian recourse to Israeli courts has been used by the state as a legitimating device to deter intervention by international institutions; when Israel reports to UN committees responsible for monitoring compliance with human rights treaties, state representatives consistently point to complaints proceedings and other litigation for victims as evidence of its respect for the rights of Palestinians. In addition, the Supreme Court itself has ruled that many repressive state policies are legal, from legislation allowing the force-feeding of prisoners and detainees on hunger strike, to punitive home demolitions, to the forced displacement of Palestinian families from their land.

Yet even in the least democratic systems, governmental reliance on legal institutions and discourse, no matter how manipulative, comes with a risk for those in power because it provides openings for people to challenge the regime, especially if freedom of speech is a protected right. Legal proceedings, academic research and teaching, and media and social media discourse provide critics of the regime a space to develop alternative narratives, counter official versions of facts, and push back against mechanisms of repression.

For example, Israeli Supreme Court rulings have explicitly described the methods of torture used by security agencies against Palestinian detainees, thus providing an official record of these violations; human rights lawyers use their petitions to obtain crucial information about abusive practices through the state’s responses to factual claims; academic scholarship has thoroughly questioned the contradictions of Israel’s self-definition as a Jewish and democratic state; and activists, journalists, and artists have exposed and showcased the harms suffered by Palestinians and the ways that state repression operates.

In the same vein, litigation before Israeli courts can sometimes provide vital relief to individual victims, such as defending some land claims or incentivizing the state to settle or compensate certain victims. In addition, without the threat of judicial review, Israeli government lawyers will lose what little ability they have to restrain politicians’ worst impulses and check their compliance with the law. 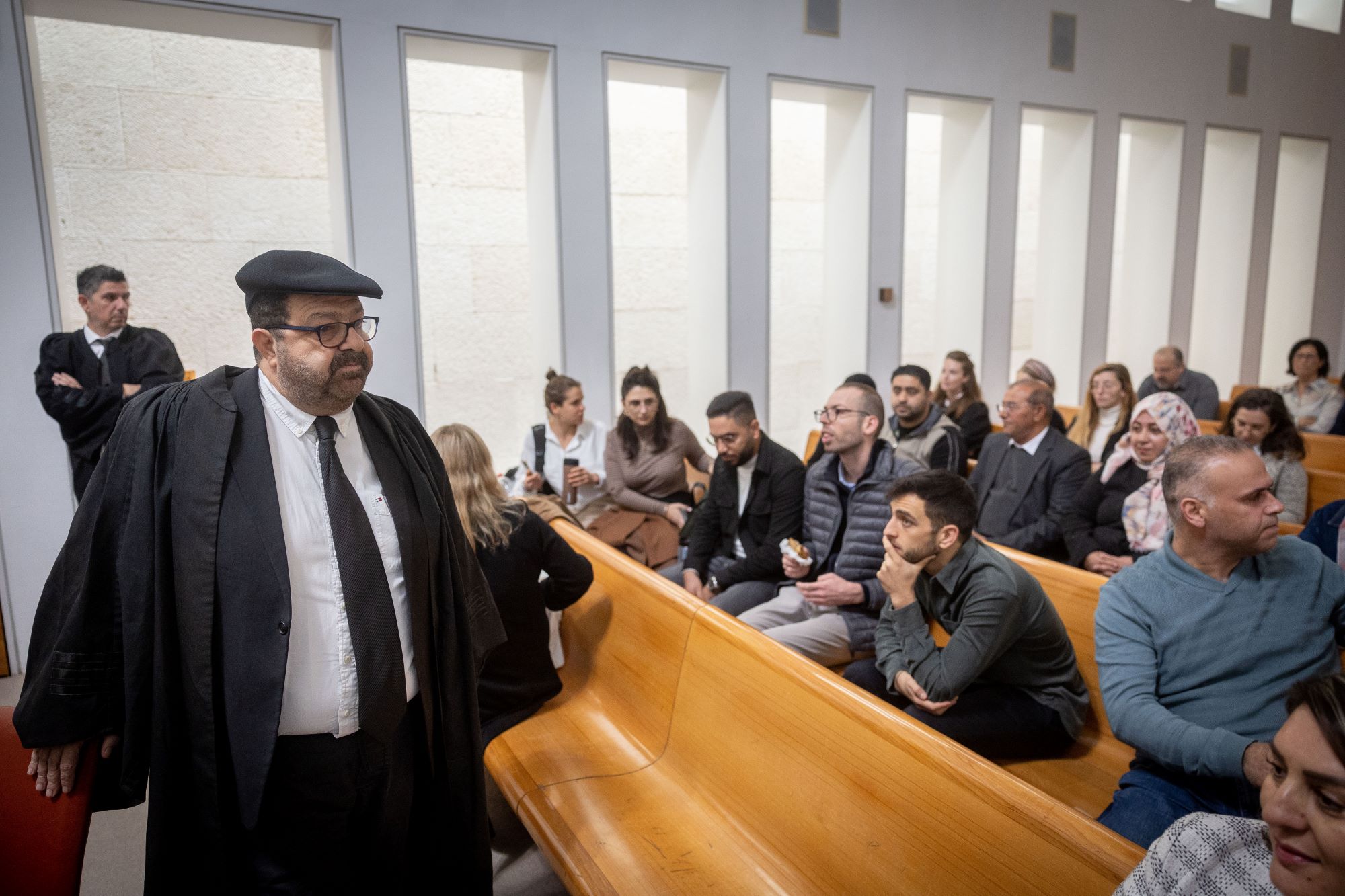 A hearing in the Supreme Court in Jerusalem on a number of petitions related to the Citizenship Law, December 1, 2022. (Yonatan Sindel/Flash90)

The far-right coalition’s plans would eliminate those last existing spheres of criticism and challenge, opening the door to drastic attacks on free speech, media independence, and academic autonomy, which have already been reduced or threatened in recent years. The reforms will make it much easier for nationalist and religious ministers to proceed with their plans for curbing human rights, including Palestinian rights within the Green Line and beyond, while robbing Palestinians of their few remaining means of fighting back — especially at a time when the political movement against apartheid remains fragmented and weakened. In short, making Israel more authoritarian will make an already repressive regime even stronger.

For these reasons, it is imperative to protect Israel’s existing legal institutions without letting go of the need to criticize the use of those institutions to legitimize the current regime. The threats that these judicial reforms pose to multiple rights in Jewish society, including to LGBTQ, women, and secular people, have led many Israelis to awaken to the deep problems with the system. Instead of blaming them for their lack of solidarity with Palestinians or for being solely concerned with their own rights, critics should see this moment as an opportunity to harness the political awakenings and build new coalitions to stop the slide toward authoritarianism, and to gradually work toward the transformation of this regime to one that upholds the full rights of all.

Limor Yehuda is a former human rights lawyer and director of the department for human rights in the Occupied Territories at the Association for Civil Rights in Israel (ACRI). She is currently a Research Fellow at The Harry S. Truman Research Institute for the Advancement of Peace, Hebrew University of Jerusalem, and the author of “Collective Equality: Human Rights and Democracy in Ethno-National Conflicts,” forthcoming with Cambridge University Press.