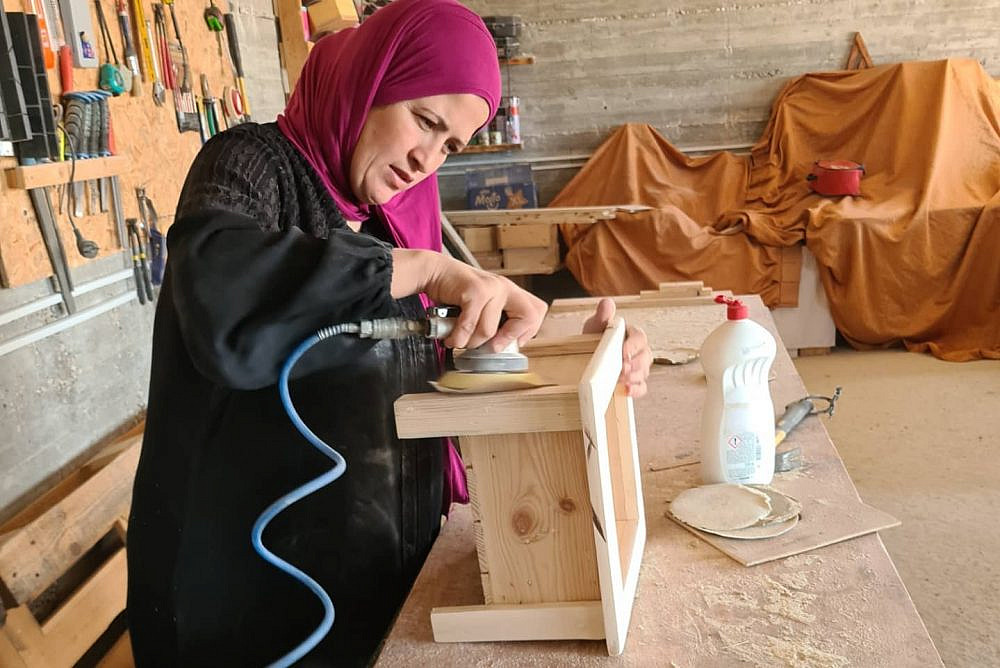 Members of the Palestinian women's carpentry workshop Rweisat for Wood Art at work, in al-Walaja, West Bank. (Courtesy from their Facebook page)

The Palestinian agricultural village of al-Walaja straddles a suffocating boundary between occupied East Jerusalem and the rest of the West Bank. Nearly totally surrounded by the Israeli separation wall, it also lies in the shadow of settlements guarded by armed personnel and security cameras that monitor every movement in the area.

And yet, in the midst of it all, six Palestinian women have found a creative outlet to bring hope to their community: a carpentry workshop producing beautiful pieces of art made out of wood.

The workshop, called “Rweisat for Wood Art,” features a range of carefully crafted, hand-made items designed out of recycled wooden objects like wooden terraces and old tables. From these objects, women residents have been carving out key chains, shelves, chandeliers, and other ornaments engraved with images and calligraphy.

The name of the workshop, taken from the nearby mountain, reflects the residents’ deep roots in their natural environment, which has long been an integral feature of the village’s way of life. “It was a way for us to show our strong connection to the land and to the mountain,” says Samya. Our agriculture belongs to the people of the village, which now is being threatened to be taken by the occupation.” The origin of the Rweisat workshop began with an idea in 2016 when Samya, a resident of al-Walaja, had the opportunity to pitch a project to the German association KURVE Wustrow to support Palestinian women in the village to establish ‘recycling gardens’ in the backyards of their homes, turning discarded materials such as car tires or plastics into planters. The foundation first funded a small pilot group of five women, and after witnessing its success, expanded and supported 19 gardens.

“Our goal was to create a safe place for women to hang out in their own yards and enjoy a bit of an outlet,” says Lubna, one of the project’s participants, who also manages tours for visitors.

The physical work with the gardens sparked further thoughts among the women about transitioning to larger projects, especially carpentry. “It was a natural development,” says Samya. “We enjoyed working with the wood of the plants, and it was clear to us all that we wanted to evolve with it.” Through their German and local sponsors, five of the women acquired training in carpentry and heavy equipment over two years, eventually opening up their own workshop and training other women in al-Walaja in the trade. The women also took up training in storytelling, which they have integrated into their public tours and social media outreach. The participants take turns playing different roles in managing the project and producing different items, giving the women a diverse experience with all facets of the workshop.

The personal impact felt by the women was profound. “All of a sudden, I realized that I love working with wood,” says Reem, one of the first members who joined the new project. “And at that time, I didn’t know I could be responsible with managing money. It was an opportunity that refined our character.”

The workshop, however, was initially met with skepticism and ridicule from many of the community. “It wasn’t easy,” says Samya. “Our struggle was with everyone. Nobody believed in us. People started making jokes and looking at us mockingly. But today, they are proud [of our work], and some have even embraced our ideas and pursued it as individuals. We see more initiative from both men and women.” Members of the Palestinian women’s carpentry workshop Rweisat for Wood Art at work, in al-Walaja, West Bank. (Courtesy from their Facebook page)

Lubna experienced similar responses even during the recycling project. “I’ve been called names,” she says. “In the beginning, all my neighbors saw me collecting trash and garbage from the street to recycle them and use it for my recycling garden. They mocked me and laughed. But after witnessing the benefits, they saw it differently. It wasn’t just the benefit of recycling materials; it helped remove the garbage from the street. In a way, we showed everyone that things could be different.”

‘This is our way to tell our story, to resist’

Before 1948, the community of al-Walaja originally resided in homes less than two kilometers away on what is today the Israeli side of the Green Line. However, the village was destroyed by Zionist forces during the Nakba; its lands are today used as a picnic site for Israelis. The Palestinian families re-established their homes on lands belonging to the village on the Jordanian side of the armistice line, before the area was occupied by Israel in the 1967 war. When Israel annexed East Jerusalem following the war, in violation of international law, the expansion of its municipal boundaries sliced al-Walaja in two: half of it lay under the city’s official purview, and the other half fell under what is today Area C of the West Bank. Like with other villages in Area C, which is under the full control of the military, Israel has systematically prevented the Palestinian residents from working on most of their lands and from building new houses and structures, which require permits that are rarely if ever granted. Israeli settlements such as Har Gilo, meanwhile, are allowed to expand on lands confiscated by the state from al-Walaja.

In the mid-2000s, the Israeli army confiscated more lands and effectively created a chokehold around the village by erecting the separation barrier, destroying homes and uprooting orchards in the process. To this day, the authorities are continuing to demolish homes in the village under the pretext that they are “illegal” structures, while pursuing plans to expand the settlement neighborhoods of “Greater Jerusalem.”

Today’s al-Walaja, Samya says, feels like a “small jail.” There is only one entrance to the village, which has been closed off by the separation wall and settlements. The occupation authorities are now threatening to confiscate and plunder hundreds of more acres of the village’s land and to demolish dozens of homes. A High Court hearing regarding the state’s plans, which was due to be held this month, has been postponed. Several of the women describe al-Walaja as a microcosm of what is happening throughout Palestine, just like Silwan and Sheikh Jarrah. Members of the Palestinian women’s carpentry workshop Rweisat for Wood Art at work, in al-Walaja, West Bank. (Courtesy from their Facebook page)

It is this sense of being encaged, says Lubna, that has made the wood art project especially valuable to the women involved. Their experience in Germany in particular helped them to gain a fresh perspective on what they could achieve for their occupied hometown. “The most remarkable moment was when we realized what freedom is,” she explained. “For the first time in our lives, we knew what freedom feels like, how it is to grow in such an environment, and the effect it has on the kids.”

Palestinian children, Lubna notes, “grow up with fear, are jailed, are unable to visit a place that is 10 feet away without approval [from the Israelis] or without going through checkpoints. We felt sad for ourselves and for our kids, that we don’t get these chances.” These worries weigh heavily on many of the participants. “We love our children and want them to live and enjoy life,” says Alia. “We have to fight this prejudice.”

“We live in an absurd situation where my grandson looks from the window and sees Jerusalem’s ‘Biblical Zoo,’ which is right in front of the village, and asks if we can go there,” says Taghreed, one of the newest members of the project, who has used the workshop as a way to take a day for herself every week. “I tell him that it’s far away, but he points and says it’s only a few meters away over the hill. He’s right: it’s so close we can see it. But because of our situation, we can’t cross or move without going through the checkpoints. It’s not easy to see the disappointment in their eyes.” In the face of these difficulties, though, the Rweisat workshop has provided these women with a space for catharsis. “For me it was a great experience,” says Elham, the newest member of the project. “Yesterday I had my first tour group that I guided all by myself. I overcame my shyness and proved to myself that I can do it.”

Tohfa mentions that there has been a growing demand by other members of the community to join the wood art project, with more and more families seeing the positive effect it has had. “Everybody has embraced it,” says Samya, adding that once a month, they organize family gatherings to invite spouses, children, and friends to enjoy their activities.

“We are not here to take the men’s place,” says Taghreed. “We are here to walk alongside them — there’s no monopoly for one gender,” adds Reem. Samya echoes this sentiment. “We love and care for our village. This is our own way to tell our story, to resist, and to keep fighting for our lives here. We see it as sumud [steadfastness].”