Whether or not the plan is scrapped, the fact is that Israel is a country where senior ministers propose and implement segregation — and keep their jobs. 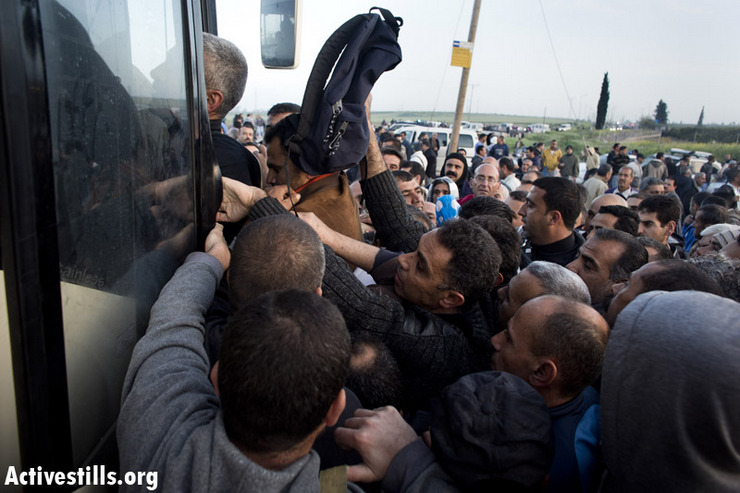 Palestinian workers board a new segregated bus line at the Eyal checkpoint, March 4, 2012. (Oren Ziv/Activestills.org) Israel began segregating buses carrying Palestinian laborers into Israel years ago. On Wednesday, authorities announced a pilot program to segregate buses taking them back to their homes.

There is something disturbingly disingenuous about the 12 hours of furor that erupted over the segregation — and subsequent “desegregation” — of a handful of Israeli bus lines Wednesday morning. When Prime Minister Netanyahu ordered the “unacceptable” segregation scheme suspended, a sigh of relief could be heard sweeping through mainstream Jewish Israel.

Democracy lives to see another day; the separation barrier once again kept segregation from infiltrating the Green Line.

The bus segregation sparked outrage in Israel not because of the segregation itself (a majority of Israelis support the idea), but because it took place within Israel proper. Palestinian workers’ morning commutes — originating in the West Bank — are already segregated. But heaven forbid that someone be discriminated against — on the basis of nationality — on a public bus originating in Tel Aviv, in Peter Beinart’s “democratic Israel.”

The international community might only recognize Israeli sovereignty within the 1949 armistice lines, but Israel makes no such distinction. True, the Israeli army — not the Israeli government — is technically the sovereign power in the West Bank. But the generals take their orders from the government. Thus, a single Israeli regime run by a single government with a single set of ministers, rules over the entire area between the Jordan River to the Mediterranean. 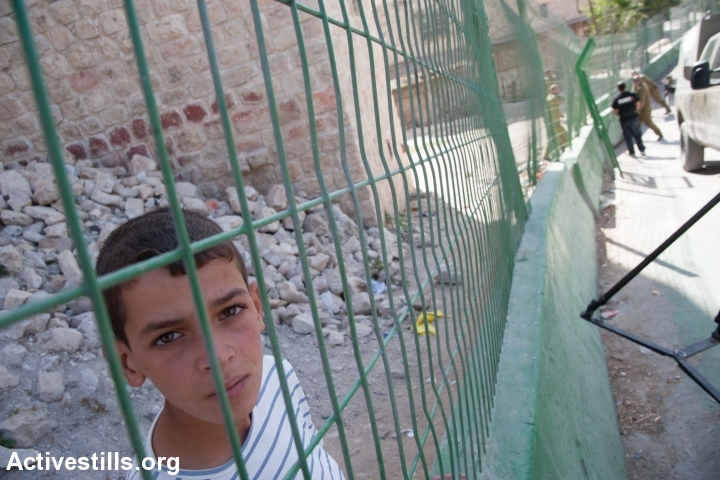 A Palestinian child watches as Israeli soldiers place a concrete and steel barrier to segregate Palestinian pedestrians from Israeli traffic along a road in the H2 section of Hebron, October 22, 2013. (photo: Ryan Rodrick Beiler/Activestills.org)

In a normal country that claims to have democratic values, an elected government official who planned and implemented a plan to segregate bus lines would be quickly fired, or at least shamed out of politics. Not in Israel. Not Defense Minister Moshe Ya’alon. Not even close.

And this is not the first time that Ya’alon has attempted to segregate buses. Prime Minister Netanyahu — and the rest of the country — can feign as much outrage and shock as he wants over the bus segregation, but Ya’alon made his plan public before the most recent elections. It was with full knowledge of those plans that Netanyahu once again made him defense minister.

On Wednesday, the prime minister called the bus segregation plan “unacceptable.” Has he ever used that word to describe the separate legal systems Palestinian and Israeli children are subject to in the West Bank? Has he ever declared the segregation of entire streets in Hebron as unacceptable? Has any Israeli minister, ever, denounced the imprisonment of Palestinian non-violent human rights defenders for the crime of organizing political protests?

As long as there is occupation there will be segregation. As long as the State of Israel interprets being a “Jewish state” as meaning some citizens should have more individual and group rights than others, then discrimination, segregation and inequality will be the norm, not the exception.

Issues like bus segregation get people angry. Activists start to plan freedom rides and massive campaigns, the international media starts to pay attention, and it seems that, for a fleeting moment, people care about the fate of Palestinians living under occupation. Until that same energy and anger and mobilization materializes around the occupation itself, against the concept of institutionalized supremacy and oppression, there will only be more symptoms over which to feign outrage.