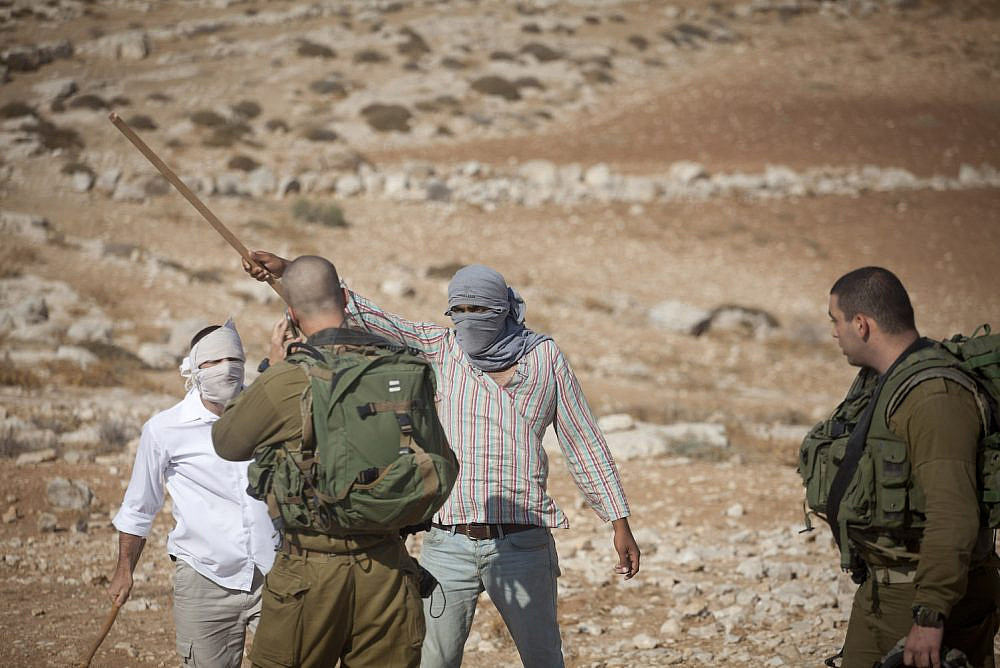 Israeli soldiers watch as settlers near the settlement of Ma'on carry sticks and threaten Palestinian, Israeli, and international activists marching together with residents of local Palestinian villages during a solidarity march in the South Hebron Hills, West Bank, September 22, 2012. (Oren Ziv/Activestills.org)

My friend Sami Huraini and his family were tending to their land in the village of a-Tuwani in the occupied South Hebron Hills on March 31, when they were attacked by an Israeli settler from the nearby Havat Ma’on.

“While we were working in our own fields next to my home, a settler drove his quad next to us,” recalled Sami, referring to an all-terrain vehicle. “He stopped and got off the quad and started to film us while we were cleaning our land from the stones, in an attempt to reclaim it and make it suitable for cultivation again.” The settler then went on to provoke Sami and his family, claiming that they were working land that he had rented from the state, said Sami.

On April 11, the Israeli police called Sami in. They asked him to show up at the police station in the Israeli settlement of Kiryat Arba, located on the outskirts of the city of Hebron in the occupied West Bank. Even though the police had summoned him, Sami had to wait before he was let in. But as soon as he sat across from the police investigator, he was treated as a suspect, he said.

“I was shocked,” continued Sami. “I felt oppressed because I was sure that whatever I would say would not be taken seriously.” At this point, he decided to remain silent for the rest of the interrogation.

Eventually, the investigator asked Sami to call a family member to bail him out. “I am not paying anything,” Sami remembers replying, surprised by his own determination. “‘He [the settler] raided our land and started to provoke us. Then you detain me, interrogate me, and now you ask me to pay money to be free. No, I will not.”

The officer then left the interrogation room, leaving Sami to wait for a while alone, not knowing what was going to happen to him. When the investigator returned, he asked Sami to sign a number of documents. A court hearing was set for Aug.11, and by signing, Sami had to agree to pay a NIS 5,000 fine if he didn’t show up. But on Aug. 10, the Israeli public prosecutor called Sami’s lawyer and told her that the court hearing was cancelled — the police hadn’t filed any charges against him.

Sami’s experience is not an isolated incident. Palestinian activists across the occupied West Bank report similar treatment by Israeli settlers and authorities, saying that when they decide to file a complaint on settler violence with Israeli police, they end up being themselves accused of violence.

This is one reason Palestinians often refrain from filing complaints with the police following attacks by Israeli settlers. According to Israeli human rights organization Yesh Din, which tracks settler violence in the occupied territories, out of 413 incidents of ideologically-motivated offenses documented by the organization between 2013 and 2015, 30 percent of the victims explicitly specified that they were not interested in filing a complaint with the police.

Most of the victims told Yesh Din that they do not trust the Israeli law enforcement authorities, while others expressed concern that filing a complaint would endanger them or their family members. There were also those who said they would only complain through the Palestinian Authority, or that they ideologically opposed engaging directly with Israeli authorities.

Between the settler and the officer

In the early 1980s, the Israeli government declared thousands of dunam in Masafer Yatta, a collection of Palestinian hamlets in the South Hebron Hills, as a restricted military area dubbed “Firing Zone 918.” Since then, the military authorities have used “security” has an excuse to destroy Palestinian homes in the area, deny building permits, and prevent Palestinian families from connecting to the water and electricity grid.

At the same time, Israel has continued to build settlements in the area. The settler outpost of Havat Ma’on was built in 2001 with Israeli government authorization, after a group of Israeli settlers broke off from the nearby settlement of Ma’on. In an attempt to address international criticism of its settlement policy, the Israeli government ordered the destruction of the outpost in the early 2000s. Since then, however, the outpost has not only been restored, it has grown and further encroached on Palestinian land.

At the beginning of this year, the settlers of Havat Ma’on built a new outpost, cutting off Palestinian shepherds from the rest of the fields where their sheep graze. Palestinian villages trapped between the settlement and the outpost — including my village, Tuba — have been regular sites of harassment by Israeli settlers and soldiers. But in recent months, Palestinian activists in the South Hebron Hills region have documented a rise in settler violence, including hurling stones at Palestinian residents, setting fire to bales of hay that shepherds use to feed the sheep, and uprooting trees. 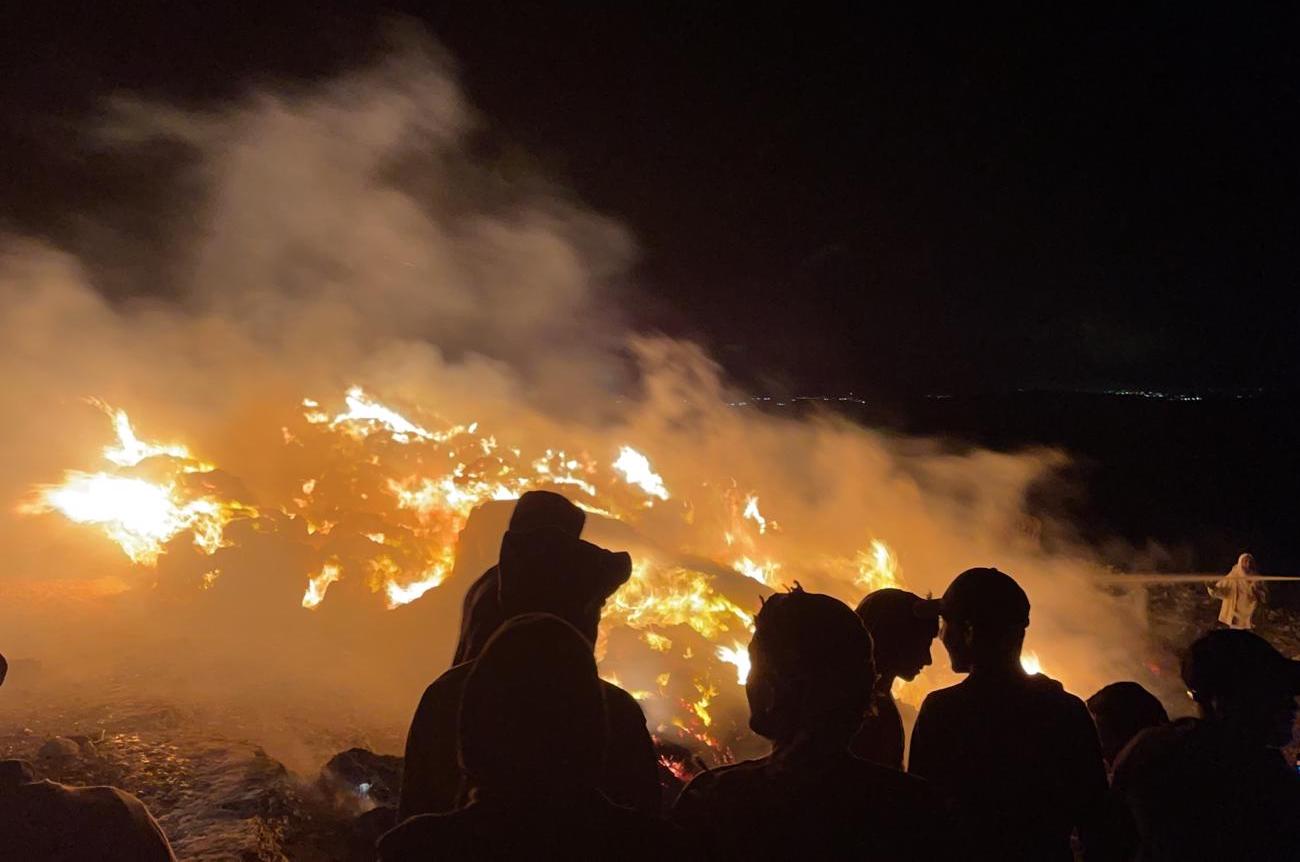 Palestinians in the village of Tuba in the South Hebron Hills look on after settlers set fire to their hay bales, June 1, 2021. (Courtesy of Jaber Awad)

On June 9th, while a group of activists were documenting Israeli army bulldozers destroying roads that lead to Masafer Yatta, my friend Mesleh Makhamri from the village Maghayeer Al-Abeid called me. “Ali, I need your help. Please bring activists and come to my field next to the water well. There are settlers attacking me and the sheep and I am alone,” he said.

I hung up and called activists who had cars and could drive to meet Mesleh. But by the time they arrived, the army bulldozers had already destroyed the road leading to his village, isolating it; it was impossible for them to get through.

I tried calling Mesleh again, but there was no answer. Later, I learned that Israeli police had handcuffed and blindfolded him, and taken him to the Kiryat Arba station. His flock of sheep were left alone, surrounded by settlers.

I called Mesleh’s father, Shihadi, to arrange for someone to accompany the sheep back home, and he sent his younger son. When a vet later arrived to inspect the sheep, he said that several had been struck and suffered bruises. 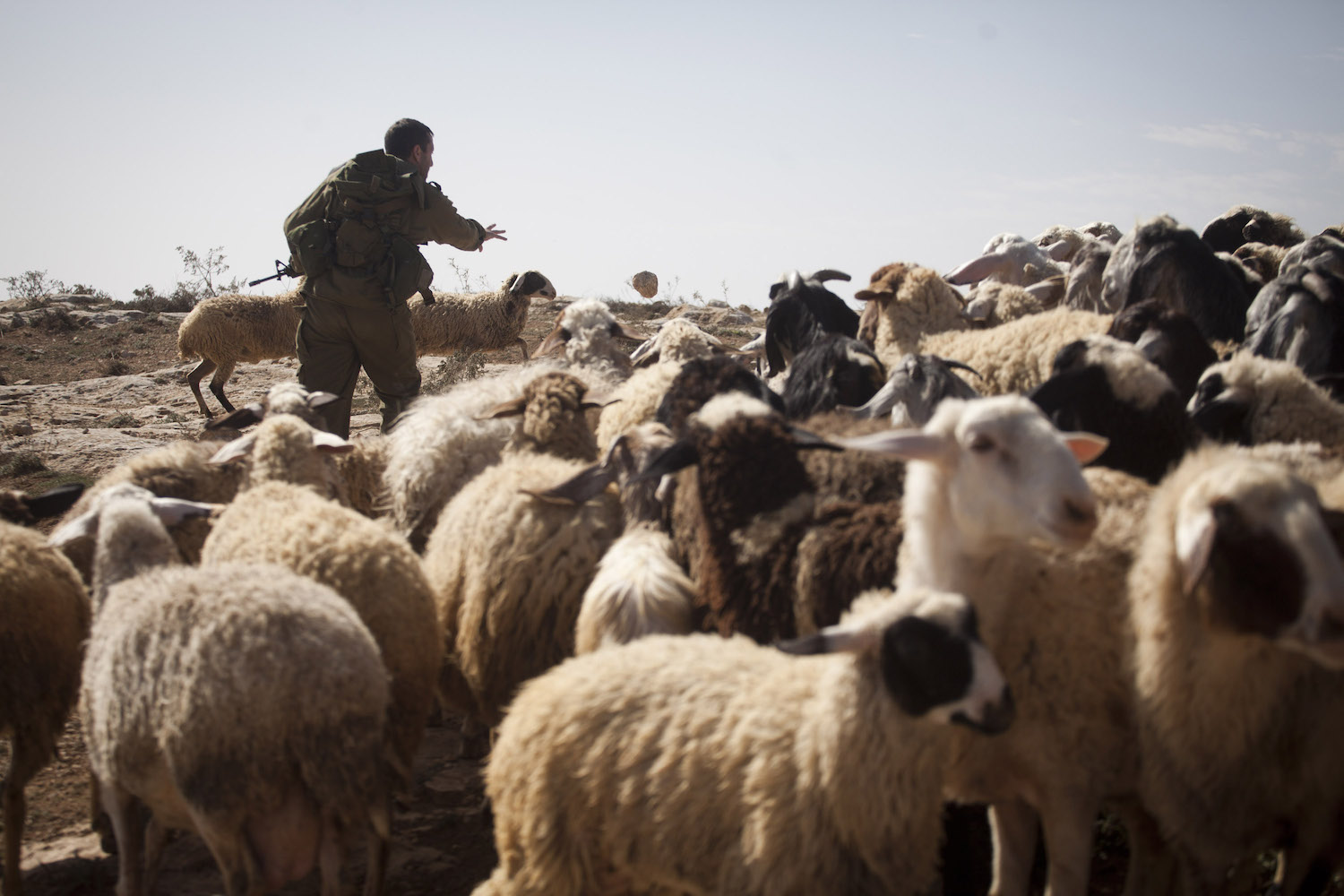 A group of Israeli activists and I accompanied Shihadi to the police station to file a complaint. But when we arrived, the officers didn’t let us in, even hours later. It got too late and we decided to go back home.

The day after Mesleh was arrested, he was brought to the military court at Ofer Prison in the West Bank. My friend Sami and I drove his father to the hearing. The settlers who attacked him had falsely accused him of threatening to kill them, and the police asked to extend his remand by six days to continue his interrogation. Instead, the court ruled to keep him imprisoned for four more days.

On June 14, the day of Mesleh’s second court hearing, the police asked for another three-day extension. However, Mesleh’s lawyer argued that the authorities had no evidence against him. He was released after spending five days in jail, on the condition that an Israeli person act as a guarantor and commit that Mesleh will attend any police investigation or hearing, and that the Israeli will pay NIS 20,000 should Mesleh not show up.

In his decision, the military judge wrote that Mesleh’s testimony seemed a lot more honest than that of the settlers. He also criticized the police for refusing to review videos that Mesleh’s lawyer had provided, and considered it negligent on their part. The videos show the settlers physically and verbally abusing him.

‘Yes, I was arrested for being beaten up’

On May 13, two Israeli American activists, Sam Stein and Bob Subeiri, were accompanying a Palestinian shepherd in the South Hebron Hills who had been violently harassed by Israeli settlers. When they arrived to a nearby well, they saw a Palestinian child who was scared to draw water because a teenage settler was standing on top of the dome of the well, observing him. Sam placed himself between the child and the settler, and the child then drew water and left.

Then, three or four settlers arrived and began beating Sam and Bob with metal and wooden rods. They stole Sam’s phone, broke his camera, and bashed the windows of a rental car belonging to a group of activists. Subeiri was wounded and was taken to a hospital in Be’er Sheva. 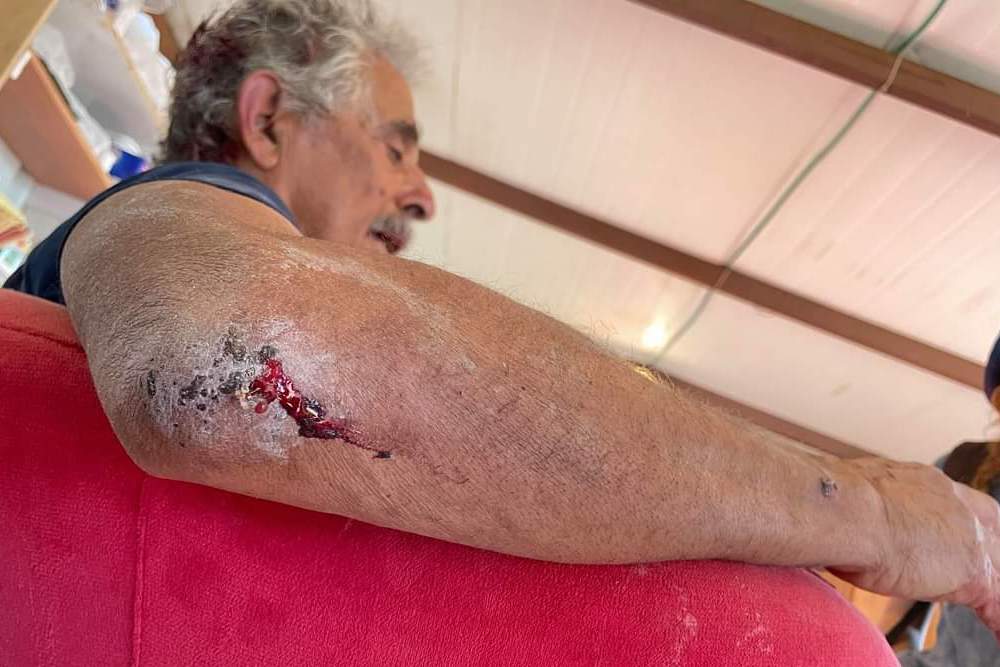 American activist Bob Subeiri seen after being attacked by Israeli settlers in the South Hebron Hills. (Courtesy of the Center for Jewish Nonviolence)

After escaping the area, Sam called the Israeli police to file a report. When a police officer came to meet him, he said that Sam was both “involved and a suspect,” and that he needed to go with him to the police station. Another friend of Sam’s, Oriel Eisner, who wasn’t even present during the incident, was also held as a suspect, and they were both barred from the West Bank for 15 days.

“I had a panic attack last night. My panic attack was not brought on because of the violence I faced from the radical settlers. It was brought on by the dehumanizing treatment I suffered from the Israeli government and police system. MY government and police system,” Sam wrote on Facebook following the attack. “Yes, I was arrested for being beaten up.”

During the interrogation, a police officer accused Sam of beating minors with a club, and explained that this was the premise for barring him from the West Bank. Sam denies this accusation. The officer also asked Sam how much he’s getting paid to accompany Palestinian shepherds, Sam wrote in his post.  “Perhaps most absurd, he accused me of incitement and provocation because I was wearing a shirt that says Standing Together in both Hebrew and Arabic. If you think ‘standing together’ is an inflammatory statement, something is profoundly wrong with you.”

“These settlers are doing the dirty work of a racist system,” Sam’s post continued. “As soon as they finished assaulting me, they went to the police and filed a complaint that *I* actually assaulted *them,* and a corrupt police system is in place that allows this to actually yield results. The police officer interrogating me literally invoked antisemetic [sic] conspiracy theories reminiscent of the George Soros obsession. I was the victim of an act of terrorism and *I* was the one who was arrested. These incidents are also exactly why I’m doing what I’m doing. Nothing’s changed, and I’ll be right back to it as soon as possible.”