Court sentences two West Bank settlers for setting fire to Palestinian-owned vehicles, but not before the investigatory process violated their civil rights.

Two extremist settlers were sentenced to 30 months in prison on Sunday, in what is the first such conviction for a “price tag” attack against Palestinian civilians.

The sentence was the result of a plea bargain. 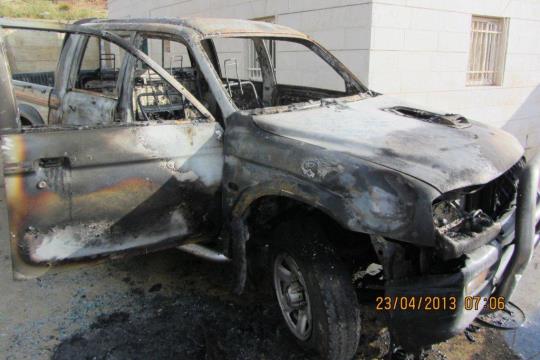 Israeli authorities have been notoriously ineffective in prosecuting settler attacks against Palestinians and their property. According to data from human rights organization Yesh Din, over the past nine years, only 7.4 percent of investigations into such attacks led to indictments.

In an attempt to combat settler violence, the Israeli government has taken a number of steps in recent years, ranging from establishing a “nationalistic crimes” unit in the West Bank district of Israel Police, to declaring groups of “price tag” assailants as “illegal associations,” a label usually reserved for Palestinian groups.

Those declarations serve law enforcement in two main ways. Firstly, declaring a group an “illegal association” opens up criminal charges of belonging to such a group. More relevant to this case, however, is that once a suspect is accused of being a member in an illegal association, their civil rights can be severely curtailed — primarily by allowing police or the Shin Bet to deny them access to legal counsel during the investigation and interrogation process.

Landsberg and Savir were both denied access to attorneys under due to the illegal association accusation, which never materialized into a criminal charge in and of itself.

Read more: Settler violence – It comes with the territory

The pair’s attorney also said they were subject to “undue pressure and abuse under interrogation,” Haaretz reported in February of this year. “Security forces misled the courts by attributing security offenses to them, thus preventing them from exercising the basic right of meeting with a lawyer,” attorney Adi Kedar told Haaretz.

While police and prosecutors should be commended for bringing violent settlers to justice, the use of draconian investigative tools like denying access to legal counsel is always abhorrent.

One of the aspects of the Israeli military legal system that we at +972 most often criticize is the denial of due process, denial of access to attorneys, unnecessarily long periods in prison while awaiting trial and the coercive use of plea bargains to achieve a near-100 percent conviction rate.

One cannot possibly condemn those practices when they are used against Palestinians and accept their use against Israelis. Civil rights and due process must be blind to nationality, race and type of crime. 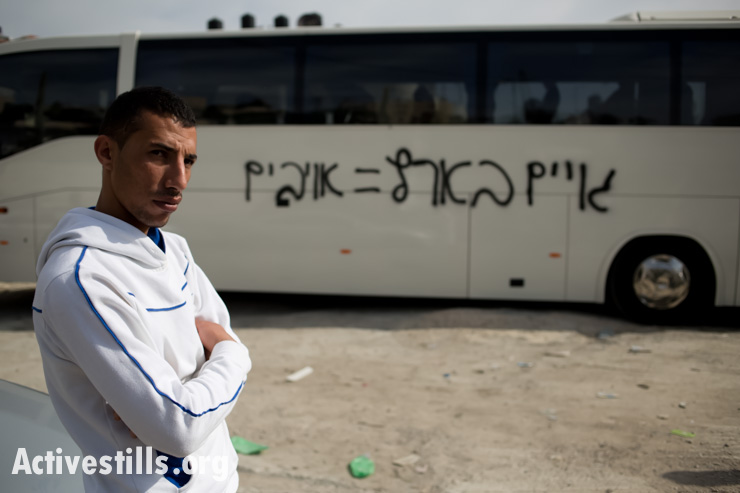 Illustrative photo: Hebrew Graffiti reading “Gentiles in the land are enemies” is seen on a Palestinian bus in the East Jerusalem neighboorhood of Beit Hanina, on March 24.

Israeli settlements in the West Bank, and especially illegal settlement outposts, inherently bring about physical and structural violence against their Palestinian neighbors — a documented phenomenon that is far more systematic than that which emanates from the violence of individual settlers. The very existence of settlements necessitates land seizures and large swaths of “security zones” that infringe on Palestinians’ access to their agricultural and grazing lands. The use of civilian settler security officers results in an outsourcing of the occupying army’s (the State) monopoly on power to private actors results in impunity for unnecessary and often-times illegal violence against Palestinians.

Meanwhile, the military forces deployed to protect settlements results in restrictions on freedom of movement for Palestinians, and the application of separate and unequal legal systems for Israelis and Palestinians living in the same areas results in an apartheid-like system that has resulted in the imprisonment of over 800,000 Palestinians since the start of the occupation nearly 50 years ago.

It is commendable that Israeli authorities are finally showing signs of seriousness in their treatment of violent settlers. But in order to stop the real settler violence, as detailed above, the only answer is dismantling the settlements themselves, which are all illegal under international law.