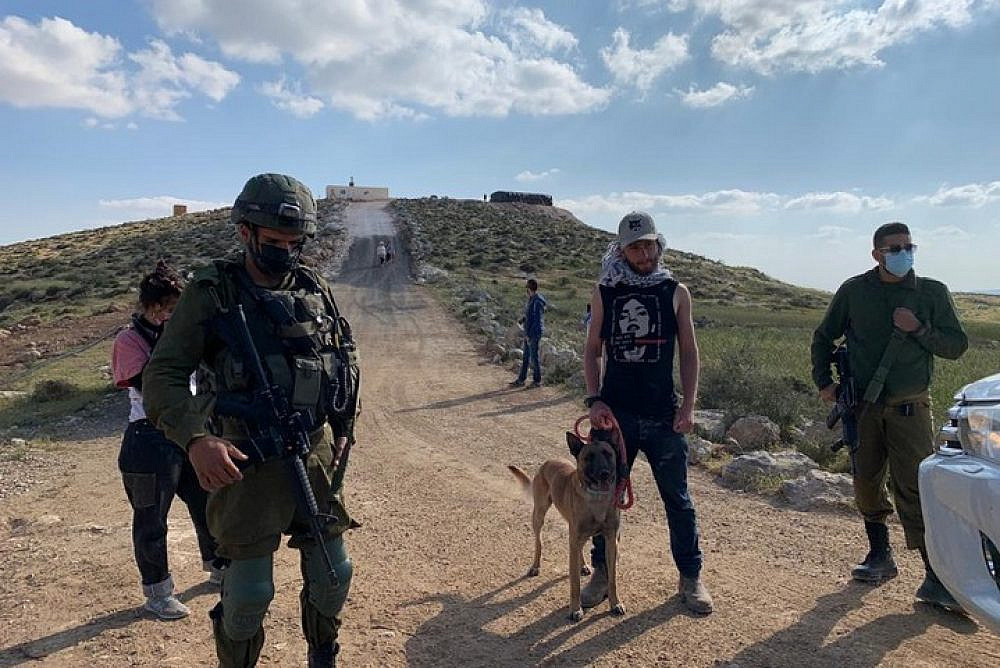 Last Monday night, I received a phone call from a friend. “Two large trucks just passed me,” he said. “They were carrying caravans. They just passed right by the road under your home.”

I live in a Palestinian community called A-Tawani in the South Hebron Hills. After my friend called me, I immediately got into my car to look for the trucks. I drove until I found them, and began following them, wanting to understand what was going on.

I told myself that they must be going to park the caravans in a new settler outpost that has been built nearby in recent weeks in front of the settlement of Ma’on. But they did not stop there and headed south. I thought they would leave the caravans at the Mitzpe Yair outpost, but they did not stop there and continued further south. I followed, trying to guess where they were headed.

What happened next took me by surprise. The trucks entered the South Hebron Hills Regional Council, the municipal and administrative center of the local settlements. I thought it was weird. Why would they bring caravans there? They have already built concrete and stone houses there.

Then on Monday, I received a call from a Palestinian shepherd named Saleh Awad who lives near the regional council. “Settlers have come to our community, and they are violently kicking me and my flock out as we speak,” he said. “And when I get to my well, there are settlers standing there, shoving me back. I cannot use the water.”

Saleh was extremely upset. “Please come here,” he told me, “we will go together to the new settlement. That’s where they came from. My brother is there now, as well as the army, the Civil Administration [the branch of the Israeli army that administers the daily life of Palestinians in the occupied West Bank], and also the settlers. We need…”

“The new settlement?” I interrupted him. “What are you talking about?” 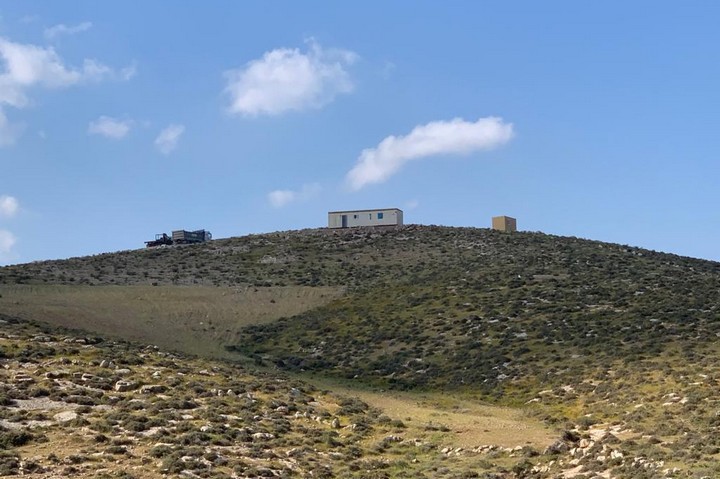 “Yes, a week ago, they brought caravans and put them on a hill next to us. They set up a settlement,” Saleh responded.

I immediately realized that these were the same caravans I saw parked in the regional council.

When I went with Saleh to the new outpost, where the caravans were indeed parked, I realized that the Israeli authorities were building a new farm there. Saleh’s brother, soldiers, members of the Civil Administration, and settlers all stood there on a new, paved road that connects the new outpost to the regional council. The road stretches over private Palestinian agricultural land, from which people make a living.

A Civil Administration representative told the Palestinian landowners who came to the new outpost: “This is your private land. The settlers are not allowed to enter or expel you from it.”

An electric cable and water pipe dug into the ground to connect the outpost to the South Hebron Hills Regional Council’s electricity and water grid. 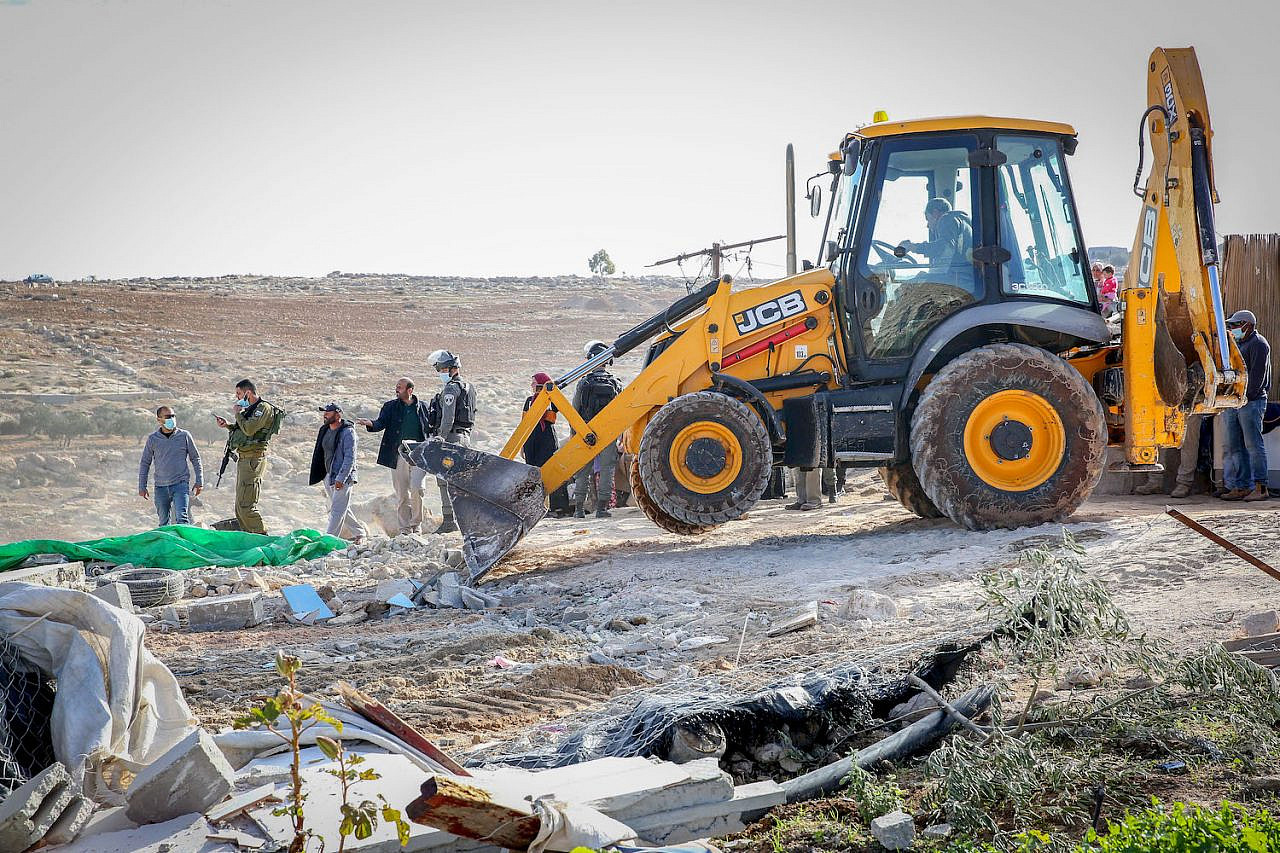 Israeli authorities demolish a tent in the West Bank area of Masafer, near the city of Yatta in south Hebron, on November 25, 2020. (Wissam Hashlamon/Flash90)

This is how it happens. Settlers bring in caravans and take over land with ease. Before they even move in, they have their own paved road and are connected to electricity and water, with the support of the regional council.

When I saw this new outpost, I felt the magnitude of the injustice. I immediately remembered my friend, Haroun Abu Aram. Haroun, who grew up in a nearby community, is lying paralyzed in a hospital in Hebron. His house was demolished six months ago, and on his birthday, Jan. 1, he began building a tin house. Soldiers came and forcibly prevented him from doing so. They confiscated his generator. When a fight broke out, one of the soldiers shot him in the neck.

I remembered Haroun as I gazed at the new outpost. I thought about how the military prevents us from doing anything, yet when one settler arrives, they grant him access to water and electricity. They also provide him with a group of soldiers who guard the outpost 24 hours a day. And when he goes down to attack Palestinians who come to tend to their land, upon which the settler has built his outpost, the soldiers suddenly disappear.

A law built on racism and supremacism

This process of establishing an outpost on state land and then evicting Palestinians from their property occurs everywhere in the occupied West Bank. 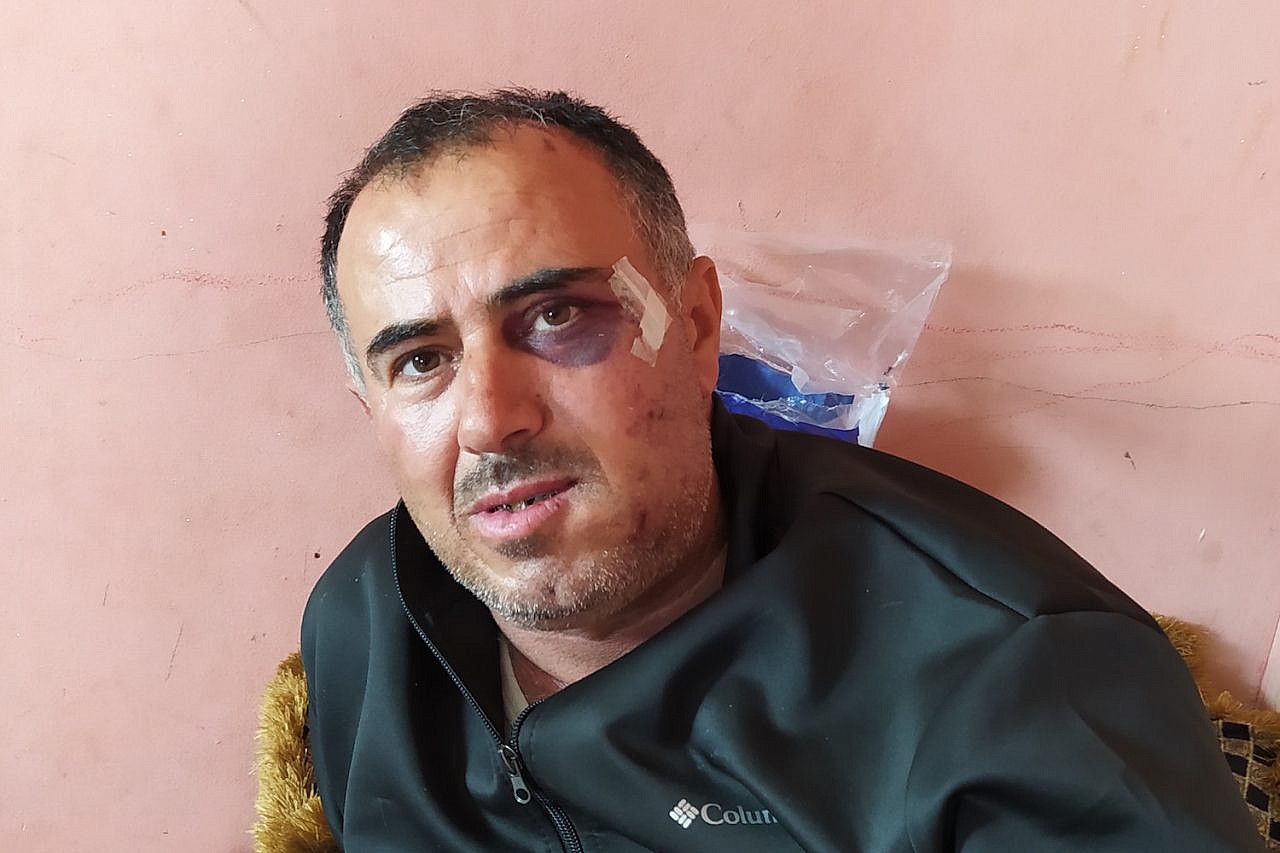 Said Abu Aliyan seen in Hebron’s Al-Ahli Hospital after he was attacked by a settler in the South Hebron Hills, West Bank, March 13, 2021. (Guy Butavia)

This doesn’t leave Palestinians living near the outposts many choices. Many of them leave for the city after being forced to abandon their land because of the violence of the settlers and the army. They lose their livelihood because it is impossible to be a shepherd or a farmer in the city. They are forced to look, often without success, for another way of making a living. They become refugees.

That morning, as I stood in front of the outpost, a settler exited one of the caravans with a dog. I recognized him immediately. This is the same settler who lives in the Havat Ma’on outpost, which was built on the lands of my community. This was the same settler who in November 2019 attacked me with his dog and injured my hand. It happened while I was documenting an attack on a Palestinian family that was harvesting olives. He and five other settlers threw stones at the family. As I filmed the attack, the dog bit my hand after the settler sicced him on me. 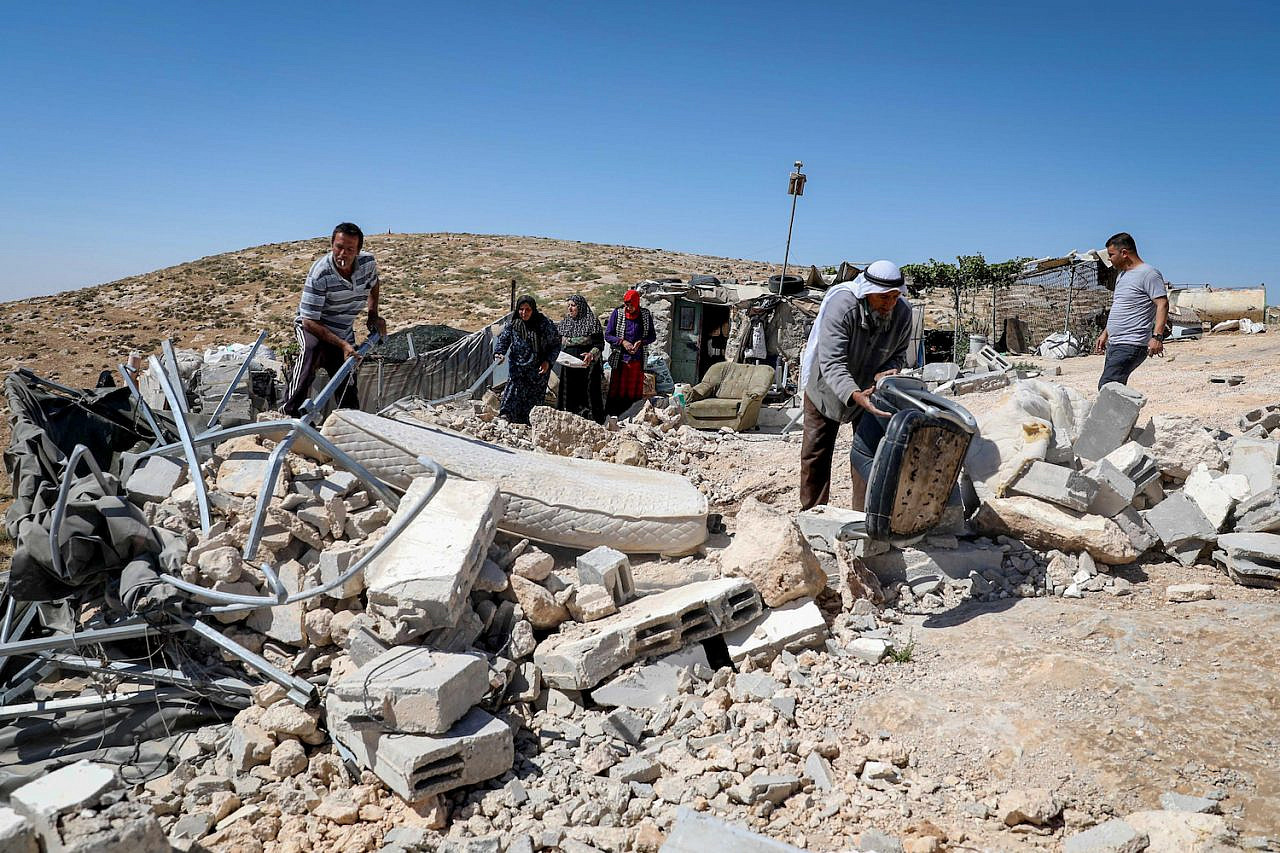 A few days later, I headed to the police station with the footage of the attack. I filed a complaint against the settler, but when I arrived to give my testimony, the police turned the investigation on me, asking why I was at the scene of the attack in the first place, and why there were Israeli volunteers with me.

More than a year has passed and the police have done nothing with my complaint. The settler never paid a price for the attack, and now the authorities have built a new farm for him. He will continue to attack Palestinians without paying a price, as he did to Saleh and his family. This is the law we live under — the kind of law that serves the strong and tramples over the weak. A law built on racism and supremacism.

The purpose of this law is to take over our land, to make us leave the area. Why should those who carried out the Nakba in 1948 and the Naksa in 1967 have any reason to stop in 2021?