Palestinian and Israeli activists protesting against settler outposts in the Jordan Valley are met with a forceful response from IDF soldiers. 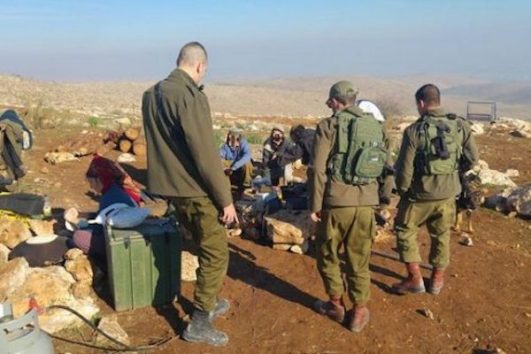 Dozens of Palestinian and Israeli activists gathered in the Jordan Valley, West Bank, on Thursday morning in order to protest the establishment of new illegal outposts in the area. The demonstrators, from joint Arab Jewish activist group Ta’ayush, were forcefully dispersed by Israeli soldiers, who fired tear gas at them. The outposts remained where they were.

The activists began by demonstrating next to an outpost that had been set up several weeks ago, near Mehola Junction in the northern Jordan Valley. The residents were hosting Israeli soldiers, serving them tea. The army and the Civil Administration — Israel’s military government in the West Bank — have taken no action to demolish the outpost, despite the structures being illegal.

The activists continued their demonstration at another new outpost, which settlers had established in the last few days next to an army base. The protesters, who were waving flags and chanting slogans against the waves of demolitions in the Jordan Valley over the last year, were met by soldiers, who shot tear gas and arrested one demonstrator. The soldiers made no attempt to dismantle the illegal outpost.

Palestinian activists tried, two months ago, to set up a protest camp in the same area. Their aim was to demonstrate against the so-called “formalization law” — which would retroactively legalize all illegal outposts in the West Bank — and against settler outposts in the Jordan Valley, as well as against home demolitions. This non-violent protest was also quickly dispersed by the army, and the Palestinian illegal outpost demolished.

The IDF Spokesperson had not responded to a request for comment at the time of publication. Should a response be received, it will be added here.

Update, Jan 6: The IDF Spokesperson responded that the protest was “an illegal disturbance” [it’s worth remembering that every Palestinian protest is illegal under the military regime in the territories. – h.m.]. The response continued: “The disturbance included violent rioting against the security forces. In response to the riot, forces used crowd dispersal methods and one of the rioters was detained for questioning.” The detained individual is the photographer Guy Hircefeld, who documented the event. He was released shortly after.

The IDF Spokesperson’s statement also said that the evacuation of outposts is not the IDF’s responsibility, but that of the Civil Administration.