Israeli soldiers attacked and wounded +972 and Local Call reporter Basil al-Adraa near his home village of A-Tuwani in the occupied West Bank on Sunday afternoon.

Al-Adraa, who lives A-Tuwani, arrived to document the soldiers after they had entered the village to demand a local resident demolish a small structure he had built next to his olive grove. Two videos from the scene show soldiers pummeling al-Adraa to the ground before beating him and dragging him off. In one of the videos, a soldier can be heard telling the other troops to “catch him [and bring] him to the vehicle.” Prior to the attack, the soldiers were asked whether they had brought with them a closed military zone order, but did not produce one.

Palestinians who were on the scene of the incident tried to tell the soldiers al-Adraa is a journalist, which did not stop them from beating him.

Al-Adraa was not arrested and was evacuated from A-Tuwani to a medical clinic in the nearby West Bank village of Al-Karmil, after which he was taken to a hospital in Hebron where he was treated for bruises. By Sunday night, Basil was back in his home.

Al-Adraa regularly documents settler and soldier violence in the South Hebron Hills. As part of his reporting, he exposed the gruesome killing of a Palestinian man at the hands of settlers in the area last May, which led to the police opening an investigation into suspected murder.

In October 2021, after he documented a pogrom by Israeli settlers on the nearby village of Mufagara, Channel 12 News, Israel’s most popular news broadcast, wrongfully accused al-Adraa of “setting fire to a structure and trying to blame it on Jews.” Last week, following a lengthy campaign, Channel 12 finally aired a correction, clarifying that al-Adraa did not, in fact, try to frame settlers.

Speaking to +972 upon returning home, al-Adraa said the army had come to the a-Tuwani to demand a local resident demolish a small room made of tin and wood he had built to provide shade for his children. Members of al-Adraa’s family, including his father Nasser, were alerted that soldiers had entered the village and immediately arrived on the scene.

“The soldiers were masked, and I wanted to stay away in order to take photos,” said al-Adraa. “I saw them gather around my dad. They chased after him but were unable to catch him. I stood to the side and filmed everything on camera. One soldier told me to go and struck me in the chest. I told him he should be the one to go. Then the officer who was with them pointed at an imaginary line in the ground and said ‘arrest anyone who crosses here.’ I was far from the line. I asked him over and over again whether he had a closed military order. Then he ordered the soldiers to arrest me — for no reason. Four soldiers jumped on me and pushed me to the ground. I yelled that I was a journalist, but they were very violent. One of them pulled me by my head and then they dragged me on the ground. They beat me, including with their weapons, and then stepped on me. I told them to call an ambulance but they did nothing.” 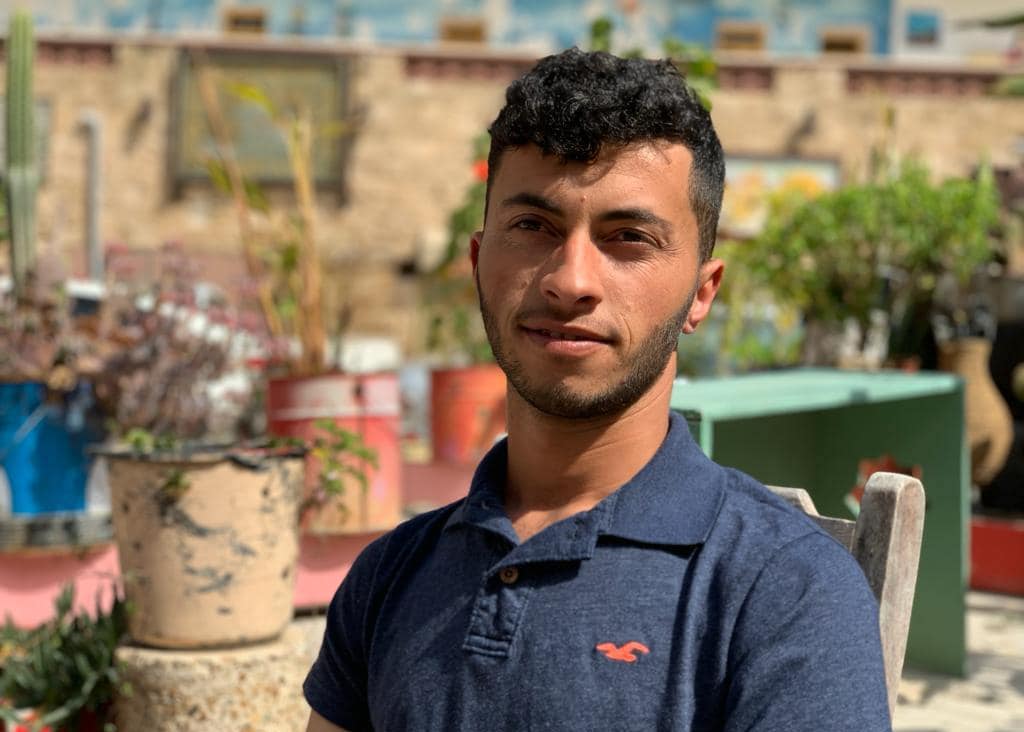 Sami Hureini, a Palestinian activist who witnessed the assault, said the soldiers appeared unhappy when he and al-Adraa arrived to film them. “They tried to prevent us from documenting and wanted to arrest me,” Hureini said. “At a certain point they left me and started [confronting] Basil. They beat him and tried to arrest him, but eventually released him.” Hureini said that the army targeted the two because they “are out documenting in the field every day. That’s the only reason they attacked Basil.”

“We wanted to film them,” Nasser, Basil’s father, told +972. “As soon as we got closer, about 100 meters from them, they shouted at us to go back. One of the soldiers tried to stop me. Basil stood behind me. He stood on the mountain and documented. When they could not stop me, they went to Basil, and announced that he was being detained. Basil asked why and told them he is a journalist. They knocked him to the ground. He shouted at them in Hebrew and English that he was taking photographs and was there as a journalist. They dragged him and started beating him. He was screaming in pain and I realized he had been hit in the head and required an ambulance. That is why we tried to release him from the soldiers’ grip. After that we took him to the car and drove him to the hospital.”

Update, May 9, 2022: The IDF Spokesperson told +972 the soldiers had arrived to the area following reports of illegal construction, when 30 Palestinians “started a riot” that included “burning tires, throwing stones, and physical and verbal violence.” The unit said they are still looking into the circumstances of the incident.