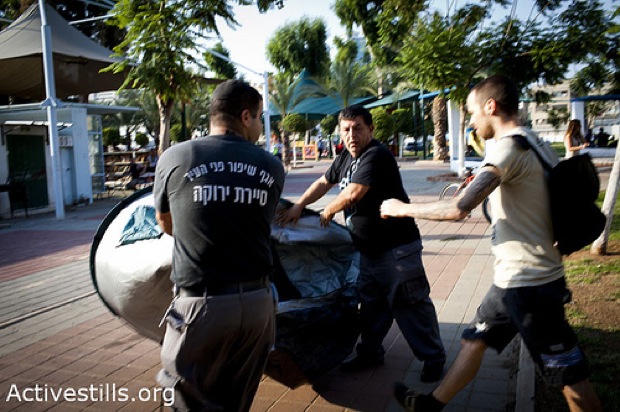 After Saturday night’s rally, when it became clear that all those arrested were banned, whether for seven 15, or 30 days, from engaging in the tent protest, it occurred to me that being up in arms about the boycott law seems redundant since severe violations of freedom of speech and protest are taking place right here and right now in Israel – and are of course even more subversive than legislative initiatives since they are under the radar and much less reported on.

The banning of protestors from a protest site is a violation of the right to demonstrate and to freedom of speech. If they are charged with something, let them be brought to trial, and if convicted, get issued their punishment. But finding ways to avoid the legal process (by taking advantage of those who fear staying in jail and having a police record by getting them to sign conditions) is anti-democratic and tyrannical. This practice has been happening to Israeli activists in the West Bank for many years, and more recently in East Jerusalem as well. (See my article in Haaretz on this matter.) But now the authorities are using these same tactics in central arteries of the country where they (will hopefully) receive much more attention.

Today, 5 protestors in Jerusalem who demonstrated and blocked roads in front of the Knesset were arrested and later released on similarly extreme conditions to those in Tel Aviv:  They were barred from participation in protests for seven days and prohibited from entering the Knesset and its immediate surroundings for 30 days. Effectively, the state has banned these protestors from continuing to fulfill their right to protest in the immediate future.

In another event related to the housing protest, tents that were set up in southern Tel Aviv neighborhood of Neve Sha’anan (a low-income neighborhood with a high population of migrant workers and refugees) as part of the housing protest were forcefully taken down early Monday morning without warrant by officers from the National Parks Authority (Hebrew report in Ynet), whose job it is to make the city “look prettier.” Other than the double standard of tents being accepted by the authorities on Rothschild Boulevard but not in other areas, this is once again a violation of freedom of protest that circumvents the legal process. While the municipality claims Rothschild Boulevard is the only place people are allowed to protest and pitch tents, why should residents of other neighborhoods not be allowed to use their public spaces as a place of non-violent protest as well, as they have been doing throughout the country?

Netanyahu and his government are scared, very scared. The bottom line is that these protestors do not present a threat to public safety, and while engaging in provocative acts of civil disobedience at times, there is no justification for singling a few out and banning them from the very places in which they are trying to bring about change. That is of course, unless you accept the fact that Israel is knowingly using rogue, authoritarian methods to suppress a popular uprising. 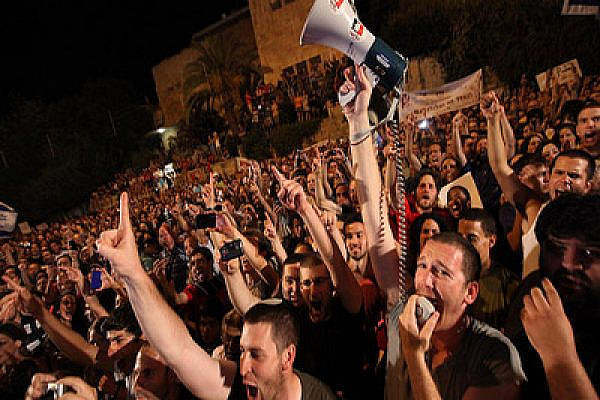 J14: The exclusive revolution
How the largest social justice movement in Israel’s history managed to ignore the Palestinians This piece was co-written with Max Blumenthal. A shorter version originally appeared on Alternet. The men and women who set out to build a Jewish state in historic Palestine made little secret of their settler-colonial designs. Zionism’s intellectual author, Theodor Herzl, described the…
By Joseph Dana August 25, 2011 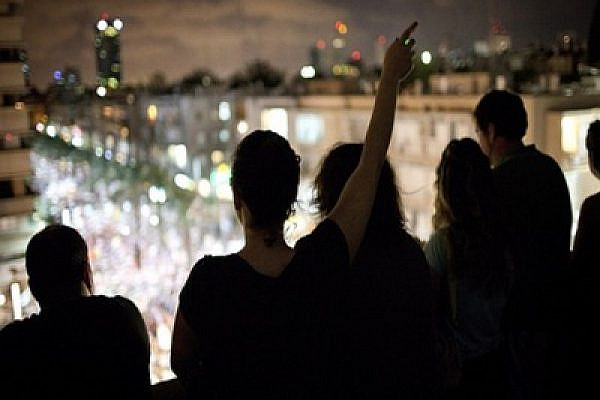 An immigrant to Israel struggles to stay here
The social justice movement has started up just in time to offer middle class Israelis like Karen Kaufman hope that life in Israel might finally get better – and cheaper By Karen Kaufman I moved to Israel exactly 15 years ago. Almost immediately after finishing my last exam at high-school, I got on a plane,…
By +972 Magazine August 7, 2011 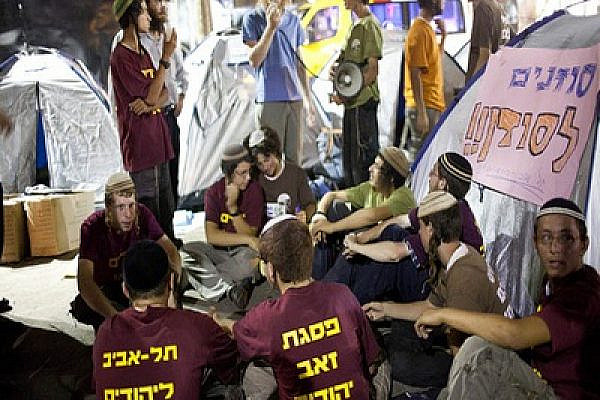 Jewish supremacists visit social justice protests
How long can the social justice protests go on without defining what “social justice” means? While there was no official rejection of the Kahanists’ visit by protest leaders, some activists confronted them and skirmishes broke out Yesterday far-right groups and prominent settlers, including extremist leader Baruch Marzel, showed up at the tent encampment on Rothschild…
By Mairav Zonszein August 4, 2011