While petitioners argued that Mohammad Allan, now on his 64th day of a hunger strike, currently poses no risk to security, the state only agreed to his release on the condition that he live outside of the country for four years. 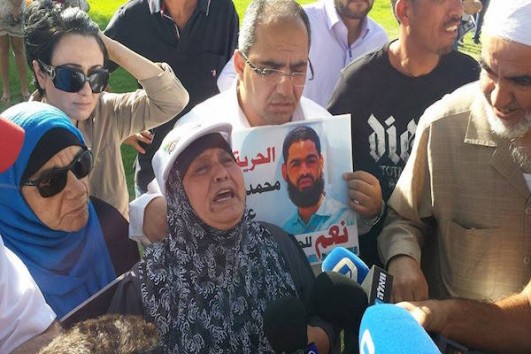 The Supreme Court held a hearing on Monday to consider demands to release Mohammad Allan, a Palestinian detainee who since Friday has been in a coma at Barzilai Hospital in Ashkelon as a result of a 64-day hunger strike.

While the state rejected the petitions to drop the administrative detention orders, it said it would be willing to release Allan on the condition that he be deported and live outside of the country for a period of four years.

According to Al-Haq, a Palestinian human rights center, the policy of deportation constitutes a war crime under the Fourth Geneva Conventions and the Rome Statute, both of which forbid the forcible transfer or deportation of protected persons — in this case, people under occupation.

Al-Haq added that “forcible transfer and conditional release cannot be an alternative to Israel ending its practice of administrative detention and the systematic denial of the rights of Palestinian detainees.”

Allan has been hunger striking since November 2014 as a means of protesting his administrative detention, which has denied him the right to a trial or to know the evidence charged against him.

The first of the two petitions to the court was filed by attorney Kamil Natour, on behalf of the Palestinian Ministry for Prisoners’ Affairs, and the second by human rights organization Adalah and attorney Jamil el-Khatib.

The petitioners argued that “the drastic deterioration in Mohammed Allan’s health situation since he became unconscious on Friday August 14, 2015 eliminates the security concerns that allegedly justify his administrative detention,” and, as such, he should be released immediately.

The state rejected the petitioners’ arguments, claiming that Allan would likely return to terrorist-related activities if released, and thus would continue to pose a threat to Israel’s security. 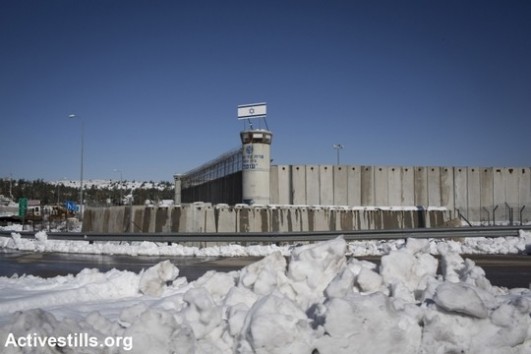 During the hearing, Justice Elyakim Rubinstein concurred that “there is no dispute” that Allan does not currently pose a danger to the state’s security, given his comatose state and dire medical condition. The court concluded that it would wait until August 19 to see if Allan’s medical condition changes, and requested that the state enter negotiations with the petitioners in efforts to reach an agreement.

Another hearing will be held on that date and a decision will be issued based on Allan’s situation.

Following the hearing, Adalah and el-Khatib, the attorney, stated that, “The court’s request to the state in itself indicates that the court believes that the petitioners’ arguments are correct. Therefore, the continuation of Allan’s detention is very problematic from a legal point of view.”

The petitioners also rejected the state’s proposed conditions for Allan’s release, arguing that, if accepted, it would effectively signal that the state could use deportation in the future as a “solution” for dealing with administrative detainees who protested or went on hunger strike against their custody. 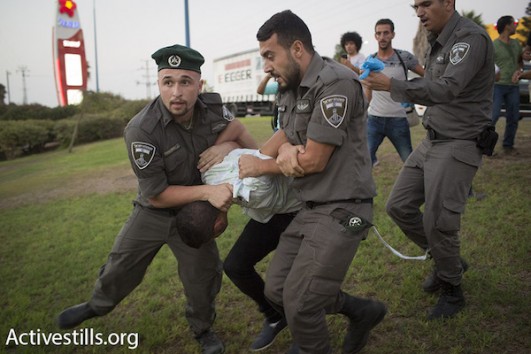 Israeli police detains a Palestinian protester at a demonstration for the release of hunger striker Mohammad Allan, outside of Barzilai hospital in Ashkelon, Israel. (Oren Ziv/Activestills.org)

Yesterday a demonstration outside Barzilai Hospital against Allan’s detention was violently suppressed by Israeli police, who also stood by as right-wing Israeli activists attacked the protestors.

BECOME A MEMBER
More About Adalah