A new survey of Arab citizens of Israel following waves of anti-Arab activity shows that most have not given up on Israeli society, but instead express strong support for social activism to advance Arab issues, general social problems, and an end to  the occupation.

With so much nastiness directed against them, it wouldn’t be surprising if Arab citizens have given up on Israel. But with insufficient polling and reporting on public opinion in the Arab community, it can be hard to know.

And this is an important time to know how one-fifth of the population thinks. The current Knesset has proposed a slew of bills directed against this community; unprecedented “Price Tag” attacks have targeted Arab sites in Israel including mosques, cemeteries and business establishments.

Further, it’s been a tough six decades in general for Arabs in Israel. Until 1966, Arab areas fell under martial law, not unlike occupation; discrimination in housing, education, labor markets and fund allocations is the norm, and then in October 2000, 13 Arab citizens were killed by police, creating a profound rift. Since then, voter turnout among Arabs has dropped significantly relative to Jews; and now the current Knesset seems hell-bent on booting them out of the Israeli family, in feeling and in fact.

When I conducted a survey in October among Arab respondents, commissioned by the Abraham Fund Initiatives (AFI), we were prepared to find isolationism, anger, inertia.

Instead, the results showed a high sense of belonging in Israel and a strong spirit of activism. Arabs support the summer’s social protest, bucking both initial suspicion from the protest leaders, and cynicism among the Arab press and leadership. Many Arabs report participating, and many more are open to joining in the future.

The survey also reveals a strong core of committed and experienced activists, who support social engagement and partnership with like-minded Jewish citizens. This group feels more alienated and more concerned with the Palestinian cause than others, but not at the expense of local social causes. It looks like an emerging portrait of the next generation of Israel’s Arab leaders.

The data here is drawn largely from my study for the Abraham Fund (noted as AFI); other sources are marked with initials, with survey information and links at the end. This represents my own “best-of” selection of the data. Readers are invited to ask about other public opinion topics that interest you, and I’ll do my best to point you to any available data.

The Palestinian occupation is a high priority: When asked what they feel is the most urgent problem in Israel today for the government to solve, “ending the occupation,” ranks first out of seven items, with 32%. [AFI]

Belonging, but alienation. Nearly 60% of Arabs say they belong in Israeli society, but of those, two thirds say they belong only “somewhat.” One-quarter (23%) say they do not belong (the rest marked “both at once”.) [AFI]. The 2011 Democracy Index confirms the finding: 62% feel “part of the State of Israel and its problems,” either to some extent, a large extent, or a very large extent. [DI]

Yet there are signs of alienation.  In 2010, 42% say they are not satisfied with being citizens of Israel. [AJRI].

-Nearly half (49%) said they have not experienced a racist incident in their lives. But among those who had, when offered a list of agents who might have discriminated against them, the top figure responsible for such incidents was the Jewish public (18%) – ranked higher than the Israeli authorities, institutions or workplace. [AFI]

Desire Integration, not Isolation. Most of the data points to both a sense of alienation but a clear desire for greater integration and co-existence, with little evidence of isolationist trends. Based on 2008 data, Sikkuy’s report stated: “Among Arab citizens there is sweeping support for economic, political and social integration (88 percent, 81 percent and 78 percent, respectively).” [S]

More Arabs than Jews – 80% – said they believe that friendly relations between Jews and Arabs will prevail in the future; 70% of Jews felt this way. [AJRI]

-Roughly 60% consistently supports the social protests in various questions asked in my recent survey. [AFI] This is lower than roughly 81% among Jews [PI] (some surveys over the summer showed nearly 90%  support among Jewish Israelis).

-59% say they share the same problems expressed by the leaders of the J14 protests. [AFI] 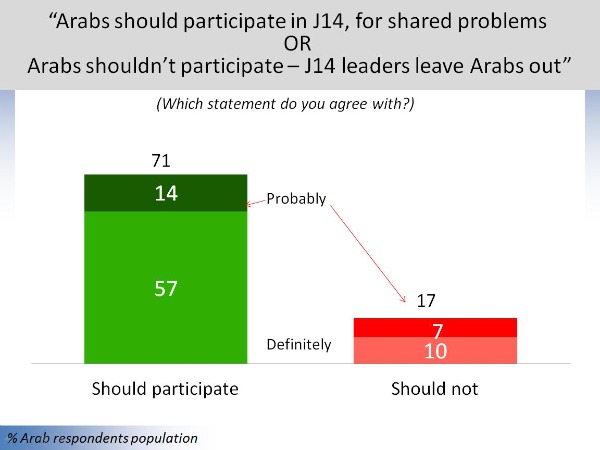 -When asked about the main reason why Arabs should participate, the top response (29%) was that the protests were an opportunity to put Arab issues on the agenda. [AFI]

-Participation encouraged cooperation: about half (49%) of people who participated in the social protests say they are now more interested in cooperating with Jews in Israel, compared to 24% of those who didn’t participate in J14.

– If the social protest leaders embrace Arab issues, this activism could rise further: Were the protest leaders to declare that ending the occupation, providing solution to Arab housing problems, and improving the Arab education system are integral to greater social justice in Israel, large portions said this would raise their desire to participate in the future – 47%, 51%, and 57%, respectively.

The Activists: Alienated, Palestinian. Those who expressed higher levels of alienation (in the questions of “belonging”) were significantly more active both in the past, and in the J14 protests. Of those who said they “don’t belong,” 35% participated in the social protests (in some form), compared to 13% among those who said they do belong. [AFI]

-Arab respondents who were involved in social activism in the past were much more likely to participate: 50% of them said they were involved in the protests, compared to 10% among non-activists. [AFI] 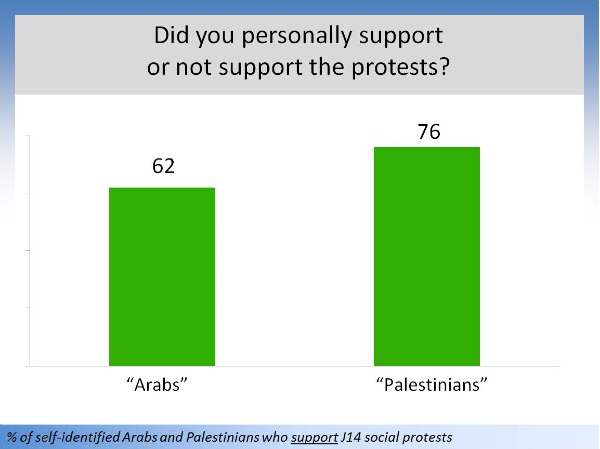 -“Palestinian” identified respondents are more empowered – following the social protests, 57% said they feel citizens like them can influence decision-makers, compared to just 38% among “Arabs.” Also, 57% of those who participated in general felt this same sense of empowerment, compared to 42% among those were not involved in J14.

Women: Agents of Change? Arab women are still under-employed. My survey for AFI showed that they were active in social change at half the rate of men in the past, and fewer women than men participated in the current social protests. When an Arab activist was shown this data, he explained that many of the meetings were held late at night; clearly there are cultural barriers as well.

But this situation seems poised to change. Women make up more than half the Arab students in higher education, according to Abraham Fund research from a few years ago. The research from 2007-2008 by Sikkuy showed that women are more likely to take a self-critical look at their own society. When asked if the traditionalism of Arab society is partly responsible for current inequalities of Israeli life, just 28% of Arabs agreed. But over 70% of those who agreed were women [S-Heb]

In my recent survey, more women than men saw the protests as an opportunity to put Arab issues on the agenda (32% of women, 26% of men). More than twice as many placed education as the country’s top priority. [AFI]

The combination of education and opportunities for activism is bound to make a change.

The data indicates that Arabs remain committed to creating and living in a shared and equal society. The malicious legislative and social attacks seem to be galvanizing an increasingly committed and sophisticated cadre of activists whose number and strength, I predict, stand to grow. There’s something to look forward to in 2012.

For convenience, I have used the term “Arab,” rather than writing the cumbersome “Arab/Palestinian” throughout (since the majority of respondents in my survey choose the identity of “Arab” or “Arab Israeli” first – where Palestinian identity stands out in the data, I use that term). This is in no way a denial of the centrality of Palestinian identity for many citizens of Israel.