A new survey released by Ariel-which-is-now-known-as-a-University, shows, remarkably, that the majority of Israeli Jews inside the Green Line are still basically wedded to settlements and barely register that they pose a problem.

-A 52 percent absolute majority agrees that settlements are “a true Zionist act,” twice as many those who disagree (26 percent). The remainder, roughly one-fifth, were in-between. Disclaimer: if I had been asked, I might also have agreed that West Bank settlement is a Zionist act, according to what Zionism has become in recent decades (some would say, always was). I don’t think either settlements or what Zionism has become are good things and perhaps there are some like me who answered this question with a similar reasoning. But as a public opinion researcher, I can say with some certainty that the vast majority of that 52 percent has nothing but admiration for “true Zionist acts.”

– Another absolute majority of 54 percent disagrees with a statement that the settlements are illegal – more than twice as many as those who agree that they are illegal.

– A clear plurality of 46 percent say settlements provide a “security” band around the country, 28 percent disagreed (another quarter admitted to being in-between).

– Respondents were divided about whether the settlements are a waste of money, with a small plurality who disagree – 43 percent. Nearly 40 percent do see them as a waste of money, a gap that is within the margin of error.

– Fewer than one-fifth – 18 percent – view the settlements as the source of the Israeli-Palestinian conflict, with 56 percent disagreeing with that statement. Here again, I would offer a qualification: I don’t believe the settlements in “Judea and Samaria” – as per the survey text – are the source of the Israeli Palestinian conflict either. The conflict is much older than 1967; it is a political conflict comprising elements of land, water and other resources, religion, ethnicity and culture. Settlements are perhaps the greatest exacerbating factor and obstacle at present; as such, they are transforming the nature of the conflict, but they are still not the source. But again, I doubt this is the reasoning behind most respondents’ answers. It’s far more likely that the underlying narrative among Israelis is: “we didn’t start the fire.”

So far, there is little new other than the depressing realization yet again that the Israeli public and leadership are comfortably aligned in their complacency and general support for the status quo – which means, of course, unprecedented settlement growth until a two-state solution is impossible (if you don’t believe it’s impossible already) because, hey, settlements are really not a problem for peace or for Israelis. Palestinians don’t really factor in.

What’s interesting is that the authors of the survey, Dr. Miriam Billig and Dr. Udi Lebel of Ariel University, interpret the data as indicating a stark left-ward shift among the Israeli public. The large headline on their press release (Hebrew) says: “The Israeli public shows pragmatism and cuts to the left.” Say what?

Well, here’s what they say:

And that’s true, if you compare the current survey to the 2012 data. But I promise you don’t need to be a pollster to look at the following and realize why their statement is off. Look at this graph: 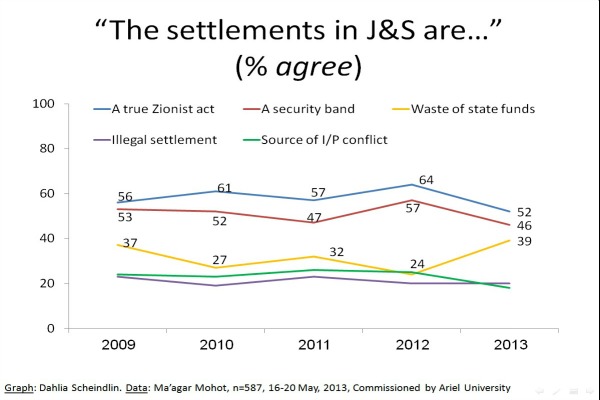 And admit it: this is the most boring graph you’ve ever seen. Right? That’s because in the five years since the researchers have been asking these same questions, the trend has barely changed. If you believe in a two-state solution, it’s nice that the 2013 data are in fact just a few lonely points toward a “left” direction on those three questions – but this is close to meaningless, considering the very tiny range of responses and comparing to years before 2012.

And there is no change at all in the portion who view the settlements as illegal, while fewer than ever consider them the source of the problem (I didn’t insert the actual numbers, to avoid crowding). Left wing? Really?

Here’s one more example, among a longer list of data points that are worth perusing and critiquing – just to show that there is indeed a trend of problematic interpretation. Regarding potential solutions for the settlements, here’s what the researchers from Ma’agar Mohot, the research company that collected the data,  say in their report: “The data have remained stable, without significant changes, compared to previous surveys.”

Here are the numbers (on this point, the Ariel University authors refer to the portions among those who have an opinion, not counting those who don’t know – these are the figures cited here). Again, look at the boring graph below. These data have not changed, except for a small spike in 2012 in the percentage prepared to annex all the territories. Yes, the 2013 shows a decrease – to exactly where it was before. 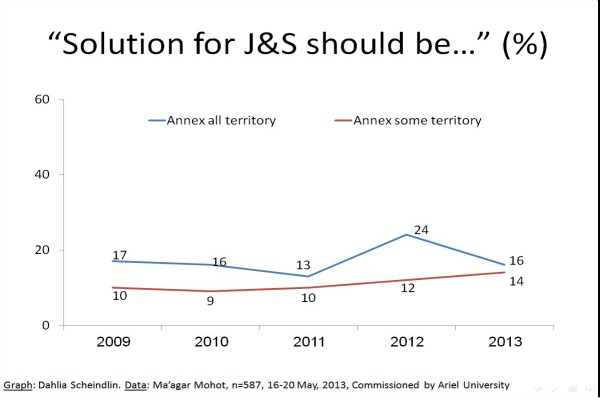 Yet here is what the Ariel U. authors write:

There are significant changes in everything related to the public’s position on the preferred solution for Judea and Samaria [sic]: a significant decrease among those who are prepared to annex all of the territories, and a mild increase among those prepared to annex part of them. We can deduce that the image of a “demographic threat” has sunk in, and that [the public] has adopted the framework of withdrawal discussed in the press, including land swaps for keeping the settlement blocs which have become consensus.” [Bold in original]

Really? Based on a 4-point rise, within the margin of error, over five years, of those prepared to annex “some” and a false drop in the essentially stable minority who wants full annexation – that means the “demographic threat” has sunk in, pragmatism abounds?

On its own, the data is rich and interesting, and more extensive than I can cover here. But why the strained attempt to put a left-wing spin on it through selective comparison with 2012, which looks like an outlying survey – rather than looking at the longer-range data, or even the stand-alone figures? Do Ariel University researchers want to prove that Israeli Jews are the good guys, ready for two-state compromises? Or do these scholars want to show that they are prepared to report on trends that run counter to expectations about what a settlement university would want? Ultimately, the data so clearly exposes the people’s comfort with the status quo, as shown at the top – did they think no one would notice?

One thing is stable or even trending “leftward” from past years: according to their surveys, in 2009, 42 percent in total were prepared to evacuate some, most, or all of the settlements (“small number, large number, all”). In 2013, that total number is 51 percent – what I would call a measured rise since this is the highest percentage of all those years, beyond the margin of error (I am really assuming their previous studies also included only Israeli Jews inside the Green Line – otherwise, that would be an easy explanation for the change). I’ve seen and conducted surveys that asked questions in various ways about support for dismantling settlements (after the dismantling in 2005)  and gotten even higher support for evacuation.

The conclusion looking at trends over plenty of time is that were Israelis to be asked by their leaders to dismantle settlements – they may not like it, but they would do so. The bottom line remains: no one is asking, and they aren’t offering.