The Passover seder can be trying at the best of times: all that food, family and arguing. But it’s even more treacherous territory if you’re a leftie — so here’s your guide to getting through the night (relatively) unscathed. 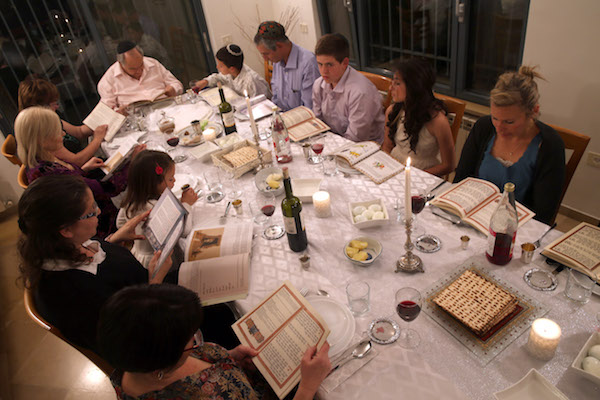 The Passover seder is fast approaching, and along with it, the inevitable political arguments with extended family. Every year, some opinion writer pens a “guide” to surviving the entire affair, and coming out on top.

But you can’t win an argument in which both sides have valid claims, and the Israeli Left’s tendency to ignore the valid claims of the Right is one of the main reasons so many people view it as so disconnected from reality.

So here’s what not to do:

No, you can’t guarantee security. Certainly not in the short run. Everyone, everywhere, throughout time, prefers to control their own fate as opposed to allowing others to decide for him or her.

When a motorcycle rider feels like he or she is losing control, they will almost always try and regain control, even if the the odds are of almost certain death, instead of just jumping off and hoping for the best.

It’s true, Israel sacrifices a number of its people each year. But beyond ensuring that our number is lower than their number (the number of people killed on the other side of the conflict), the fundamental idea is that the nature of those losses preserves the sense that we are in control, and that the situation can be improved.

And Israel does indeed improve at minimizing the harm caused to itself from its direct military rule over the Palestinians. It’s enough to look at the senselessness vis-à-vis Hamas in Gaza (where, despite the siege, Israel doesn’t have full military control) compared to the relative calm exercised in the West Bank.

Israel has fought wars against its neighbors despite clear borders. Bosnia and Serbia fought each other for years. Russia invaded Georgia and the Ukraine in recent years. And let’s not even get started on the Middle East over the past decade. That doesn’t mean that there’s no chance of reaching an agreement in which everyone lays down their arms. Of course it’s possible. But that’s only one possibility, and you can’t ignore all the rest. 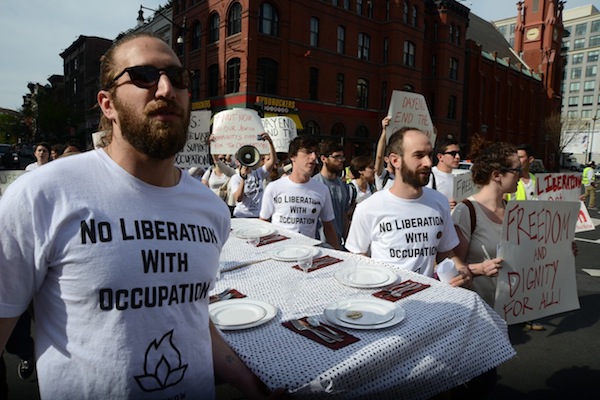 IfNotNow protestors carry a Passover table to the headquarters of Hillel International, where they held a ‘Liberation Seder.’ (photo: Gili Getz)

Don’t talk about the economy

No, the economic situation probably isn’t going to improve. The portions of the state budget that are tossed into the territories aren’t actually so huge, even if they sound massive, and don’t forget to deduct the profits from the exploitation of resources (human and natural resources) in the West Bank.

Don’t forget that when the settlers living cheaply in the West Bank return to Israel, the state will continue to subsidize their lives. And that will cost us even more. Furthermore, the military industry injects billions into the state’s coffers, largely from the daily use of all the equipment it produces. Does Israel profit from the occupation? I don’t know. Maybe not. But it’s way less clear-cut than the picture the Left often paints.

Until there are sanctions on Israel, and it doesn’t look like there will be anytime soon, there’s no point in being scared of them. Israel has stood up to international pressure since its establishment, and somehow its international standing keeps improving.

With all due respect, Dr. Leibowitz, 50 years have come and gone and nothing happened. The negative phenomena in Israeli society (and we all know that we have a good few) are actually reminiscent of xenophobia in much of the Western world, and there’s no serious evidence that the occupation has affected the Israeli street. Even the day-to-day implementation and maintenance of the occupation isn’t what it was 50 years ago, even if it’s still criminal. In short, there’s no unusual phenomenon in Israel society that one can clearly attribute to the occupation.

If you find yourself in an argument about one of those points at the Passover seder table, you lost before the argument even began.

So what should you do?

The oppressive military regime in the West Bank needs to end for the same reason that slaves in the United States needed to be freed, women allowed to vote, and LGBT couples allowed to marry. The occupation needs to end because human beings deserve to live freely, not under tyranny.

The author is a family man, a father of two cute kids, and an unbearable polemicist. This article was originally published in Hebrew on Local Call.