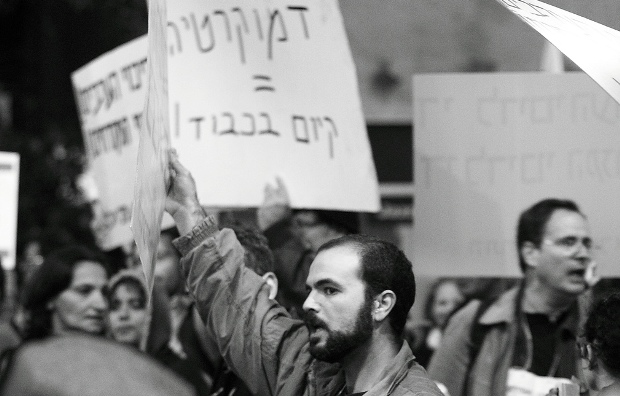 Tel Aviv – More than 10,000 people marched this evening in protest of recent anti-democratic and racist initiatives by the Israeli government. The march, which started in front of the Likud HQ in King George Street and ended at the Tel Aviv Museum Square, was one of the largest leftwing demonstrations in Israel in years.

Despite the cold weather, attendance exceeded expectations, and many protesters were unable to enter the Museum Square itself. According to the demonstration’s organizers, a last-minute effort was made to arrange additional buses for protesters coming from other cities.

Representatives of various opposition parties spoke at the event. Hadsh MK Mohammad Barakeh told the crowd that though some people hoped that the occupation would “remain outside the 1967 borders,” this idea was proved wrong. “The occupation corrupted Israel,” said Barakeh.

MK Nitzan Horowitz (Meretz) said that it’s too easy to blame [Israel Beitenu’s Avigdor] Lieberman and [Shas’] Eli Yisahy for the current unti-democratic trends. “It is Binyamin Netanyahu’s government that initiates the racist and anti-democratic laws,” said Horowitz. He later attacked Labor party and Defense Minister Ehud Barak for taking part “in the most racist government in Israel’s history.” 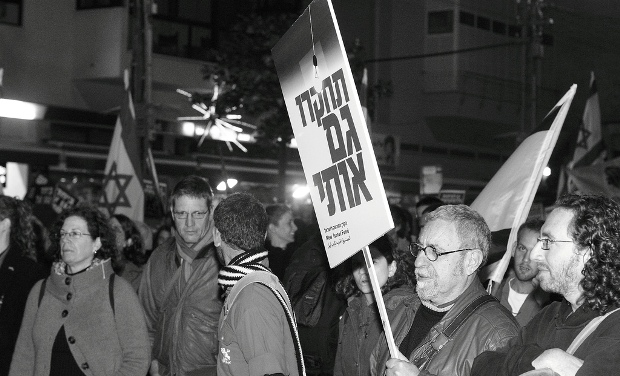 Many protesters held signs and wore stickers in support of leftwing activist Jonathan Pollak who was recently jailed for three months after taking part in a bicycle ride against the Gaza blockade.

MK Meir Sheetrit of Kadima, former Justice and interior minister, advised human rights organizations not to cooperate with the planned Knesset committee that would look into their actions and financial sources. The committee has no legal or moral authority, said Sheetrit.